“The Witch’s Diner” is a dark fantasy drama about a witch restaurant that sells food that grants wishes in exchange for the customers’ souls. Song Ji Hyo plays the restaurant’s owner and witch Hee Ra, Nam Ji Hyun plays her business partner Jin, and Chae Jong Hyeop takes on the role of the part-timer Gil Yong.

The newly released main poster shares a glimpse of Hee Ra, Jin, and Gil Yong’s cool chemistry. Hee Ra, who creates dishes that makes people become fatally addicted to them with just one taste, exudes supernatural vibes with her “witchy” appearance. She is holding a thick book of recipes in one hand, and she gazes forward with mesmerizing eyes.

Jin’s unreadable expression further adds to the mystery as she sits at the table with a fork and knife. Despite the fact that she is slicing away at an appetizing steak, her expression is shadowed with a hint of unhappiness. Fans are already wondering about the unusual relationship between Hee Ra and Jin.

Then there is Gil Yong who is standing in the background and holding a broom in one hand. He gives off the vibes of a professional part-time worker with his reliable and diligent side. He is also full of curiosity as he peers at the two women, and it’s almost as if has found out about the secret between them. 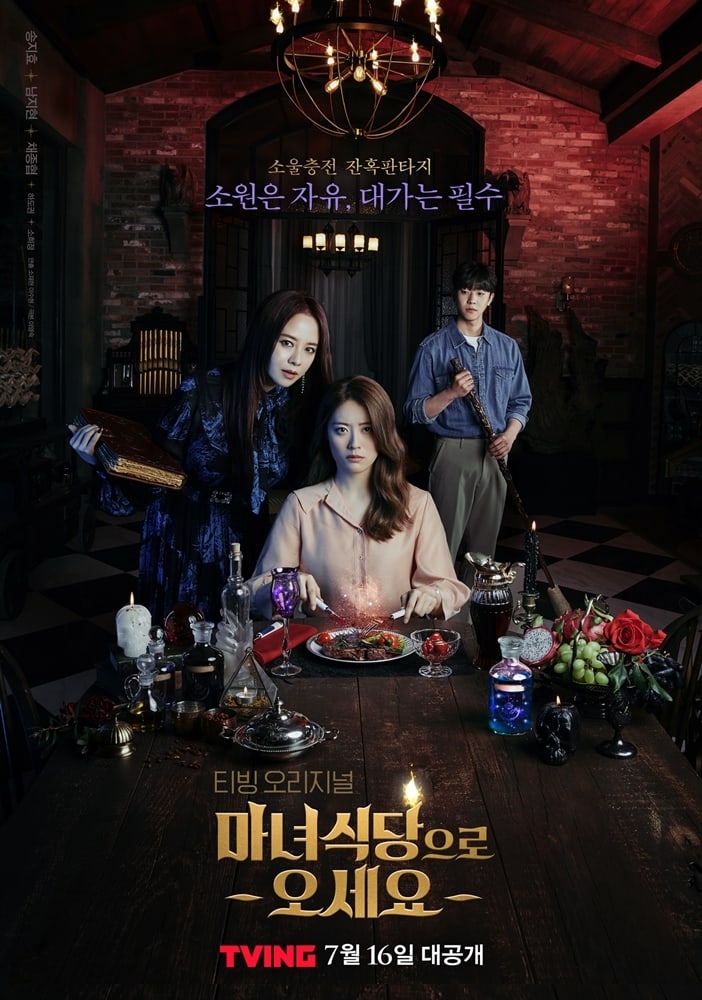 “The Witch’s Diner” will be released on July 16 and will be available on Viki. Check out a teaser here!

In the meantime, watch Song Ji Hyo in “Lovely Horribly” below: