tvN’s Friday-Saturday drama “Voice 4” has upped the suspense after hitting its halfway mark!

Here are three key points to look out for as the drama enters its second half.

1. The Golden Time Team versus the villain with four personalities

With Dong Bang Min (Lee Kyu Hyung) being revealed as the notorious serial killer Circus Man, all that’s left is for Derek Jo, Kang Kwon Joo, and the rest of the Golden Time Team to take him down.

Dong Bang Min has four distinct personalities: his real self who has a charming smile, the master with glasses who mediates each character and plans murders, the center director with exceptional hearing who tracks down targets, and the bloodthirsty Circus Man. Especially since he experienced the break up of his family due to a circumstantial murder, he is suspected to be someone who harbors a lot of anger regarding families. Viewers are curious to find out just how terrifying he really is. 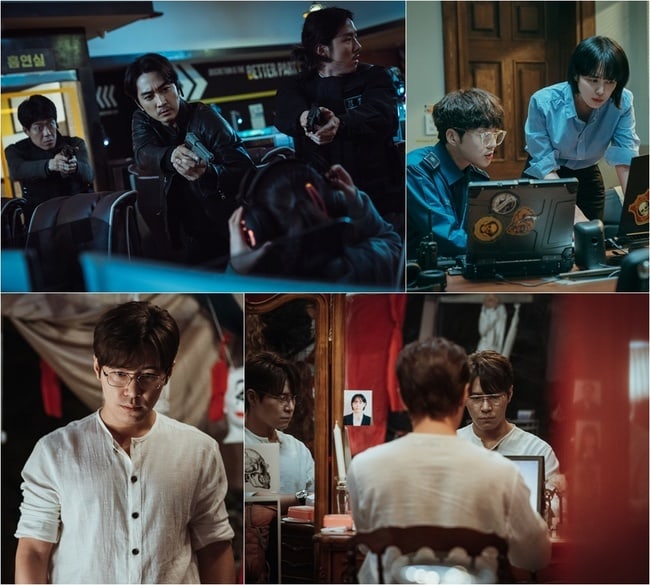 The meaning of being Siamese twins as well as Dong Bang Min’s reason for creating a personality similar to Kang Kwon Joo’s and carrying out horrific murders remains to be seen. It’s possible that their relationship will have a connection to the nightmares that Kang Kwon Joo has been experiencing, and the upcoming plot twist that occurs as Dong Bang Min steps up his game is sure to be beyond viewers’ imaginations.

3. The death of Derek Jo’s mother and sister and the secret of Sonang village

One of the clues in Derek Jo’s mother’s murder case is that after being kidnapped by a suspicious group wearing raincoats, she got a whirlpool tattoo on her wrist. In addition, it was also said that the detective in charge of the case at that time was working as a mason in Sonang village. After it was revealed that the deaths of his mother and sister were related to the village, viewers are looking forward to seeing the Golden Time Team’s investigation charge full-speed ahead.