On July 12, JYP Entertainment and Sony Music announced Season 2 of “Nizi Project” through an online press conference. Previously in February 2019, Park Jin Young of JYP Entertainment and CEO Muramatsu Shunsuke of Sony Music announced their plans to launch a Japanese girl group through the “Nizi Project” (Rainbow Project) at a press conference for their partnership. This led to the debut of NiziU in December 2020, and the group has since then snagged various records and garnered popularity from fans all over the globe. This time, the two companies plan on launching a new boy group.

According to the press conference, Season 2 of “Nizi Project” will hold auditions in eight cities in Japan including Sapporo, Sendai, Tokyo, Nagoya, Kobe, Hiroshima, Fukuoka, Okinawa, two cities in the United States including Los Angeles and New York, as well as Seoul, for a total of 11 cities. In addition to the vocal, dance, modeling, and rap categories, the fields of composing and lyric-writing have been added to the evaluation criteria. Similar to Season 1, Park Jin Young will also personally visit the various cities for the global audition in order to discover new talent.

Applications will be received starting on July 13, and auditions will be held from November to December with the goal of revealing the debut lineup by December 2022. Afterwards, the group will officially debut in March 2023 and promote as JYP Entertainment artists. Audition candidates must be male and have graduated middle school or be scheduled to graduate by March 2023. Candidates must be no older than 22 years old (by international reckoning) at the time the audition ends in their location. Nationality does not matter, and anyone who can speak simple Japanese can apply. Only contestants who are not affiliated to a specific entertainment agency, recording label, or music publisher are allowed to audition. 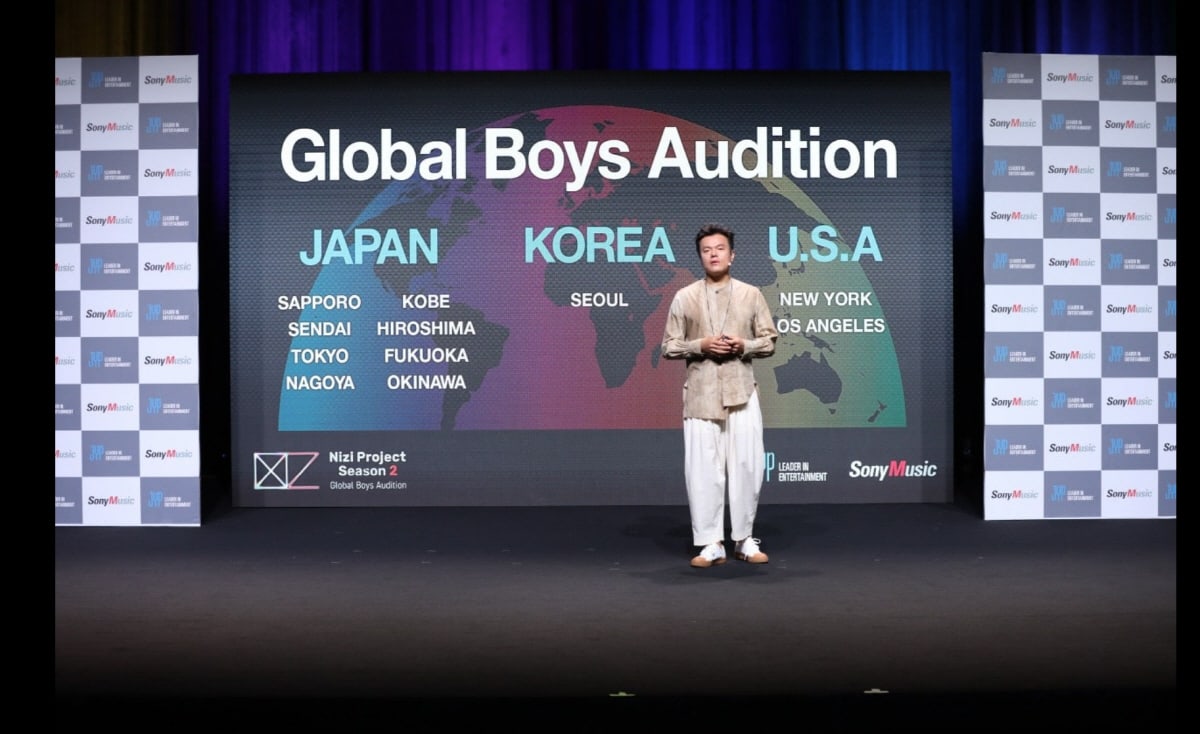 Season 1 of the audition program was broadcast via NTV and the video streaming platform Hulu. Park Jin Young revealed, “Season 2 will also be brought to you through media channels in the second half of next year.” He shared, “I remember when I first announced ‘Nizi Project’ two years ago with concern, and I’m very happy to announce Season 2 like this.” He added, “In particular, I haven’t been to Japan once since the broadcast of ‘Nizi Project,’ so it feels even less real. They say I’ve gotten famous in Japan, and I’m very curious to see if that’s also true.”

CEO Muramatsu Shunsuke expressed his happiness to deliver a bit of hope during these difficult times. He shared that the contestants and parents can feel reassured to audition since the contestants will receive training from Park Jin Young himself.

The NiziU members also participated in the press conference to give advice for future contestants. Rima shared, “I think one of the charms of ‘Nizi Project’ is that the contestants all grow while cooperating with each other.” Miihi commented, “There were times I almost lost my confidence, but I worked hard while believing in my specialness no matter as PD (producing director) Park Jin Young told us to. That’s why I hope they never forget to trust in themselves.”

NiziU was confirmed as a nine-member group in June 2020 following global auditions in 2019 and four different missions during the survival show. With the pre-debut song “Make You Happy” produced by Park Jin Young, NiziU became the first female artist to place No. 1 simultaneously on three of Oricon’s digital ranking categories. They also received a platinum certification by The Recording Industry Association of Japan (RIAJ) for their debut single “Step and a Step,” and they swept Oricon’s daily and weekly singles charts. In addition to appearing on Japan’s historic New Year’s Eve music show “Kōhaku Uta Gassen,” NiziU won the Special Achievement Award at the 62nd Japan Record Awards.