BTS Appears On SBS News To Talk About Historic Hot 100 Streak, “Permission To Dance,” And Being Presidential Envoys

On July 24, SBS announced that BTS would be appearing for a special interview with news anchor Kim Yong Tae on their evening news program (“News 8”). The news program normally airs at 8 p.m. KST, but was delayed for an hour or so due to the Tokyo Olympics.

In the interview, BTS shared their thoughts on their historic streak on the Billboard Hot 100, with “Butter” taking the No. 1 spot for seven weeks before passing it to their new track, “Permission to Dance.” RM said, “It feels like a dream. The times are what they are, but when we released ‘Butter,’ we never imagined that it would hold the No. 1 spot for seven straight weeks. After it hit seven weeks, we joked that it would be nice to get a ‘baton touch,’ but it’s an honor that it became true.”

Jin said, “I learned about it online but it’s all thanks to ARMY. I’m grateful to them for listening to our music. We’ll work harder to repay their love. I love you, ARMY.”

V was also asked about “Blue & Grey,” the song he produced about the emptiness and loneliness the group felt when the world shut down due to COVID-19. He said, “No one, including us, could have predicted this situation. Our entire schedule was suddenly canceled, so we felt a sense of emptiness. All of a sudden, we were experiencing depression and anxiety, and I wanted to express those emotions as honestly as possible, so I wrote all of it down in a note. That depression and anxiety were expressed as the colors blue and grey.”

Kim Yong Tae referenced the idea that Suga predicts the group’s successes, and Suga replied, “I’d like for us to be nominated for a Grammy again. I want to receive the award.”

BTS was recently appointed special presidential envoys for South Korea as part of President Moon Jae In’s public diplomacy initiatives. As part of this effort, BTS will be attending the 75th United Nations General Assembly in New York in September.

RM said, “We’re part of the millennial generation and we can say that we grew up together with the youths of the current generation. We wanted to express what we’ve felt and learned through that process. We’ve also directly and indirectly experienced social impacts like economic and global crises while watching our parents. Although we’re lacking in many ways compared to the dangers facing 2021, we want to do what we can as special envoys and at the UN General Assembly. It’s a heavy responsibility, but we’re taking it on with joyful hearts. We will head out and do what we can and do our best to accomplish our duties before returning home.”

Asked if they felt the pressure of their success, Jimin said, “Rather than us feeling like we need to accomplish something, we sometimes have a hard time because we don’t know how to repay our fans. We exist because of our fans and in the audience, but when we feel like we can’t repay that love enough, our hearts feel heavy.”

Asked if he had any individual goals, Jungkook said, “I’m the type of person who wants to do a lot of things. I really like what I’m doing now, so other than my goals and dreams as a singer, there’s nothing in particular I want to accomplish on my own. I do want to meet our fans, ARMY. That’s my dream right now.”

Jungkook also talked about a time when he wanted to let everything go after things didn’t go as planned, and gaining strength from fans and the members. Suga added, “Falling is scary, but landing isn’t. I think that the difference is that once you land, you can take off again. Even if it’s hopeless, as long as it’s a landing instead of a fall, we can prepare to fly again. I think that these are particularly appropriate words for our situation, so I could relate to them in the song [‘Permission to Dance’].” 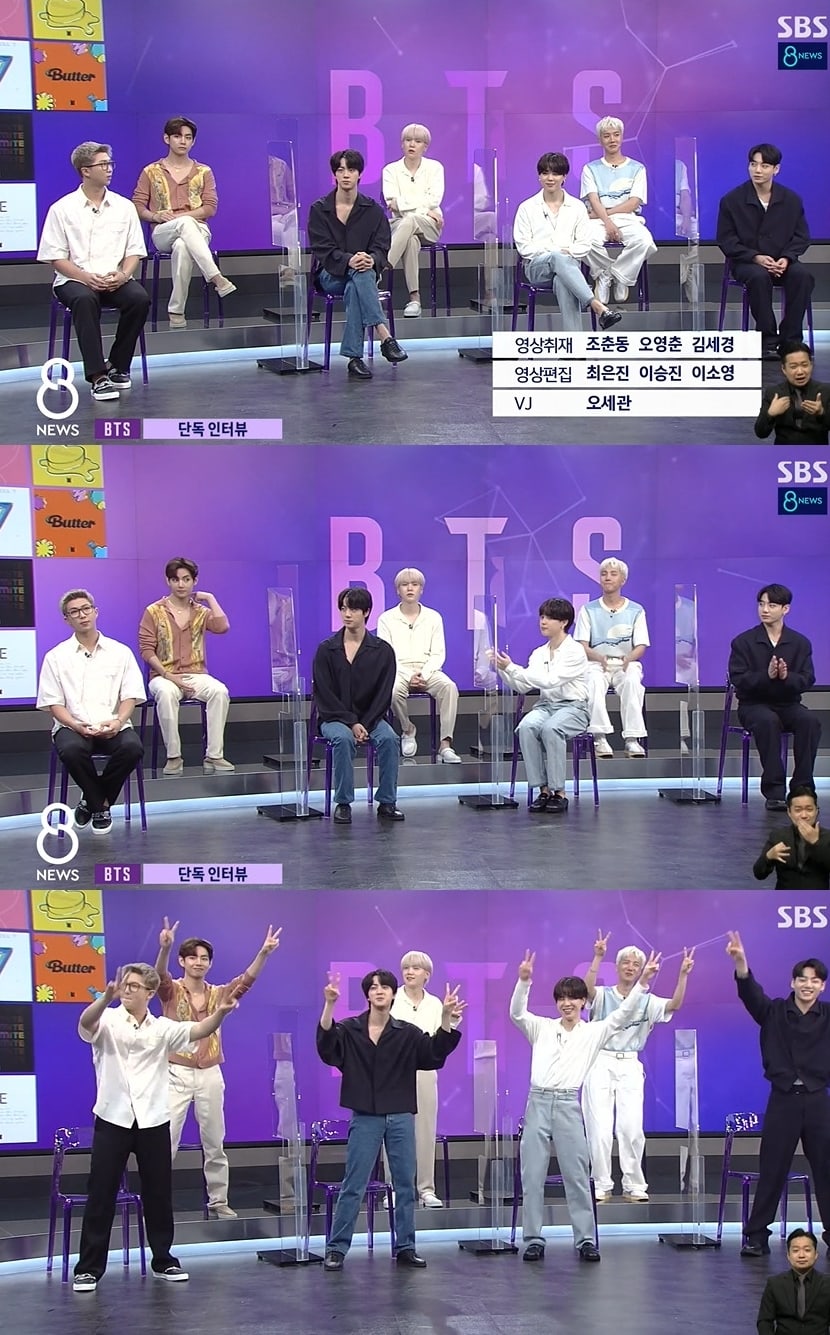 This was BTS’s second appearance on SBS’s 8 o’clock news program after their first appearance in 2018.