The person who accused Jo Byeong Gyu of school violence has responded to the actor’s agency claims that they apologized.

On July 28, the accuser shared the following response:

Yesterday, I suddenly got a lot of calls and checked the articles and the agency’s statement.

To clarify, I neither wrote an apology nor appealed for leniency, and I never will.

Anything released by the agency that is related to me is a manipulation of the media. The agency already knew me before the police complaint, and through my relatives in Korea, I heard that I was summoned to be questioned as a testifier about the defamation case, but it was impossible for me to attend.

The agency’s statement is saying that I’m a suspect when I’m a testifier. The agency is either spreading false information or the agency needs to explain when and how I turned into a suspect without my knowledge.

Staying silent about the public verification is the same as turning a blind eye to the truth. Once again, I ask CEO Moon to share his position.

1. The end of the public verification, especially the substantive truth of “W”

2. The claim that I asked for leniency

3. The reason why I turned into a suspect.

I am currently refraining from posting public writing and calmly taking legal action in New Zealand, but the way the agency is manipulating the media violates personal rights. It seems like the agency is willing to cover up the truth with lies. Lastly, I will wait for the CEO’s response one more time and verify the lies one by one based on clear evidence to find out the truth.

If you are confident, why do you refuse public verification?

The agency responded with the following statement as well as screenshots of the accuser’s apology:

Hello, HB Entertainment will give an additional statement regarding the spread of false information related to actor Jo Byeong Gyu.

1. The suspect, who posted on Nate Pann that actor Jo Byeong Gyu them with a BB gun and took over the soccer field in elementary school, admitted his statement was false through a cyber team investigation by Bucheon Wonmi Police Station and sent the following apology to the agency.

“Hello. I am the one who wrote ‘I am a victim of school violence from Jo Byeong Gyu’ on Nate Pann on February 17, 2021. First of all, I’m sorry for troubling the actor by posting something that’s not true on the internet and for greatly damaging the actor’s reputation. I am writing this because I deeply felt responsible for the fact that my writing caused great damage to his entertainment activities and daily life. At the time of posting, I didn’t think my writing would interfere with his entertainment activities, and I wrote it rashly without knowing how serious it would get. Watching Jo Byeong Gyu ending up in an unfortunate situation due to my writing made me once again recognize my mistake, and I am deeply reflecting on the damage that I caused to many people. Once again, I’m sorry to have caused this disgraceful incident and caused Jo Byeong Gyu to suffer.”

2. Kim, a suspect who posted on Instagram that they were verbally abused and hit with an umbrella by Jo Byeong Gyu while studying in New Zealand, claimed that he was a victim of school violence by stealing a Facebook photo of an acquaintance. Kim used the Facebook photo and acted as if he knew Jo Byeong Gyu, but Kim wasn’t in the photo and never had any contact with the actor. Kim’s acquaintance contacted Jo Byeong Gyu’s legal representatives first and delivered the following apology on behalf of Kim.

I would like to inform you that everything that has been uploaded on this account is not true.

In addition, I would like to share that the photos uploaded to this account were taken from Facebook without the consent of my colleagues. I sincerely apologize to them for the damage caused by pictures of their school days that were distributed online.

I am also posting this apology purely of my own will.

I sincerely bow my head and apologize to everyone who has been affected by the content of this account for the past few days.

To the lawyer: please read the message above and see if anything needs to be revised. The accuser is not in his right state of mind. We’re helping as much as we can. We ask for your cooperation.” 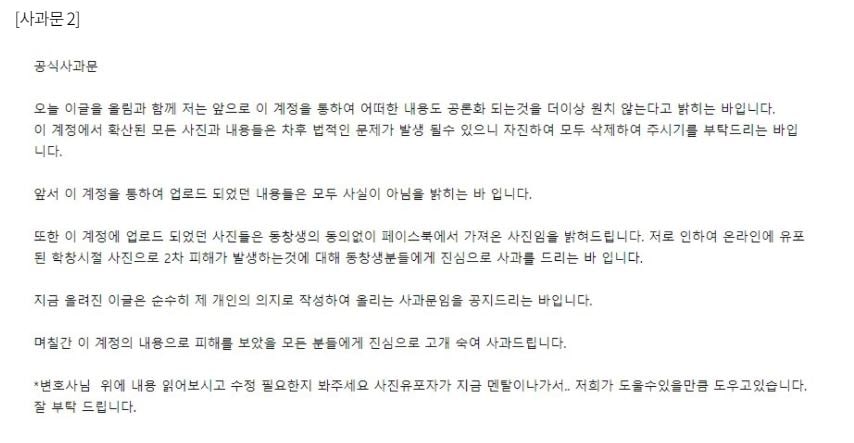 However, Kim, who has nothing to do with media coverage of the apology, argued that they have never written an apology and never appealed for leniency. Kim’s acquaintance communicated with Kim and sent an apology and voluntarily deleted false information posts.

However, Kim’s attitude suddenly changed when the agency told him that leniency would be difficult, and he has continued to defame Jo Byeong Gyu and the agency with false information.

In this regard, we filed a complaint with the Gangnam Police Station against each of Kim’s false post, and Kim was designated as a suspect and not a testifier. The case number is 2021Hyungjae0041**. Currently, we have requested to regulate the entry of criminals until we can find the whereabouts of the suspect.

We did not respond to Kim’s public verification request because there was no value or reason to respond, but they are repeatedly spreading false information and undermining the reputation and credibility of the actor and agency, so we will reply as follows.

Instead of insisting on unrealistic public verification in an anonymous cyberspace, Kim should enter the country as soon as possible to carry out the legal procedures.

1. “W” has nothing to do with the agency, and the claim that “W” is an agency employee is a groundless fact. Please check with “W” directly for claims about “W” and stop making unfounded false claims about the agency immediately.

2. Your acquaintance contacted Jo Byeong Gyu’s legal representative first, delivered an apology on your behalf, and asked for leniency.

All of your public verification requests will be carried out through domestic judicial procedures, so please stop disobeying the summons to participate in an investigation and stop the illegal acts immediately.

We will actively respond to all possible civil and criminal legal procedures against serious criminal acts that defame celebrities with false information that has not been confirmed in anonymous cyberspace.