MBC’s upcoming drama “Check Out the Event” has shared new stills ahead of its premiere!

“Check Out the Event” is about two ex-lovers who win a couples trip in a lottery that they entered before breaking up. In order to go on the trip, they pretend to be a couple and travel to Jeju Island together with several other couples.

Girl’s Day’s Minah will be starring in the drama as Ha Song Yi, a coordinator at a botanical garden who goes through a rough patch after breaking up with her longtime boyfriend. Kwon Hwa Woon will be starring as Ha Song Yi’s ex-boyfriend Park Do Kyum, who is the leader and vocalist of an indie band.

An Woo Yeon will be playing tour guide Seo Ji Kang, who winds up developing feelings for Ha Song Yi over the course of the trip. UP10TION’s Lee Jin Hyuk and Nam Kyu Hee will play YouTuber couple Song Jong Ho and Noh Hyo Jung, who are both dancers, while veteran actors Kim Young Sun and Kim Hee Chang will play Hyun Kyung Mi and Kang Jae Nam, the oldest couple on the trip.

The new stills fuel viewers’ expectations with a new glimpse of the three couples’ trip to Jeju Island. First, Ha Song Yi and Park Do Kyum enjoy a bike ride along the beautiful coast. During a brief break, she playfully pats his helmet, and he smiles warmly at her. When they’re racing ahead and looking forward, the sea is a dark color, but when they pause to make eye contact, the sea turns into a light blue color. The couple’s emotions will also be expected to change during the course of the trip. 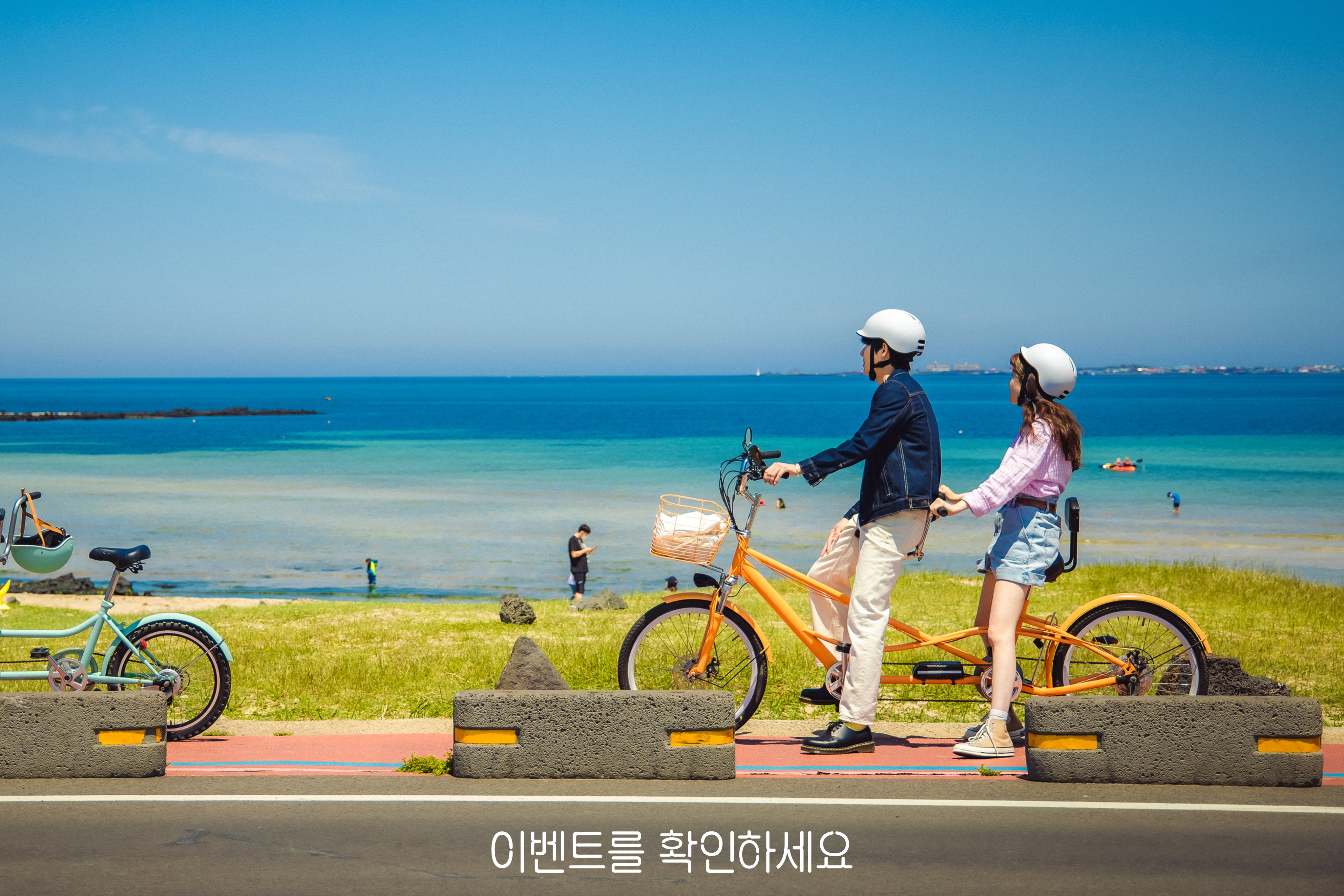 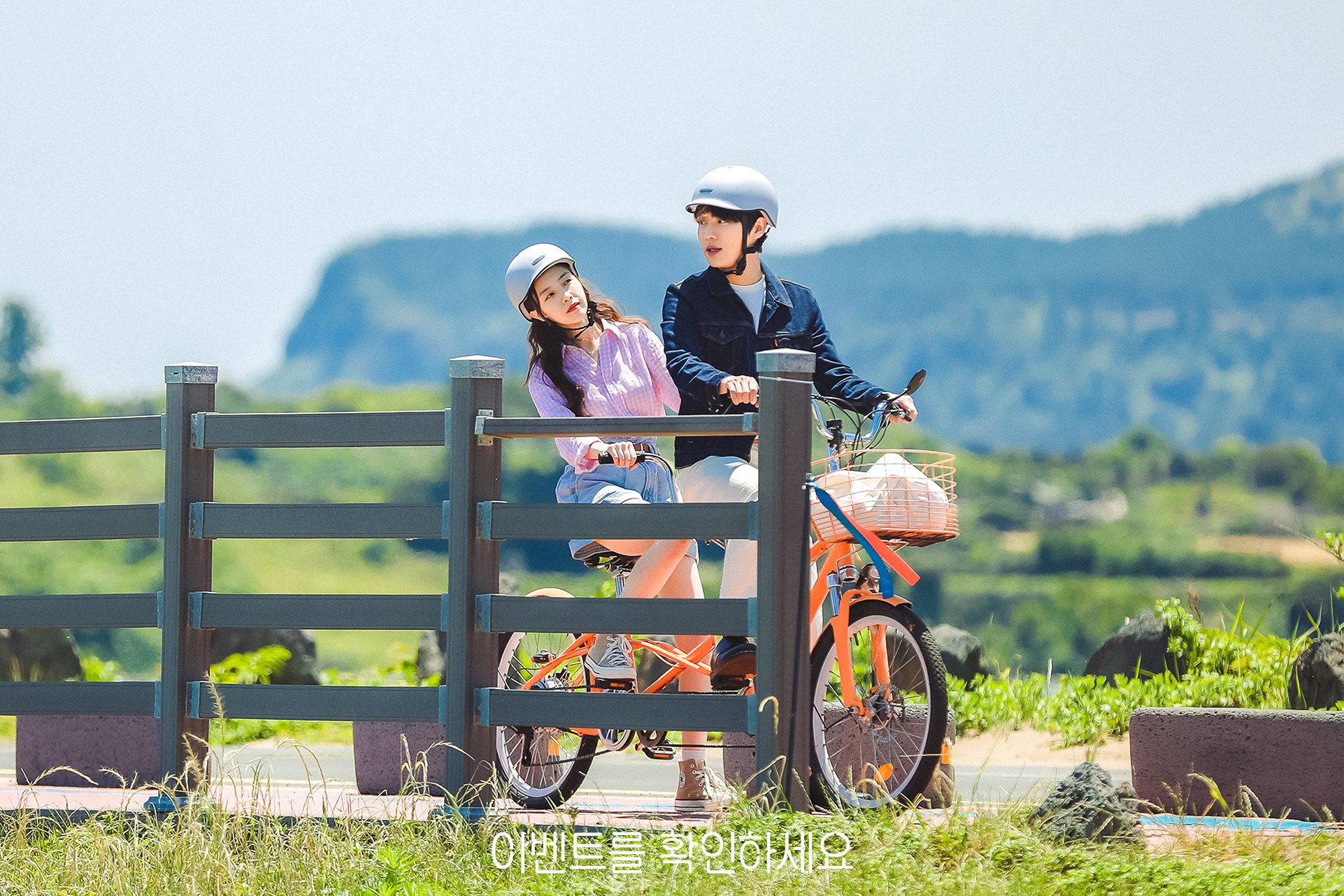 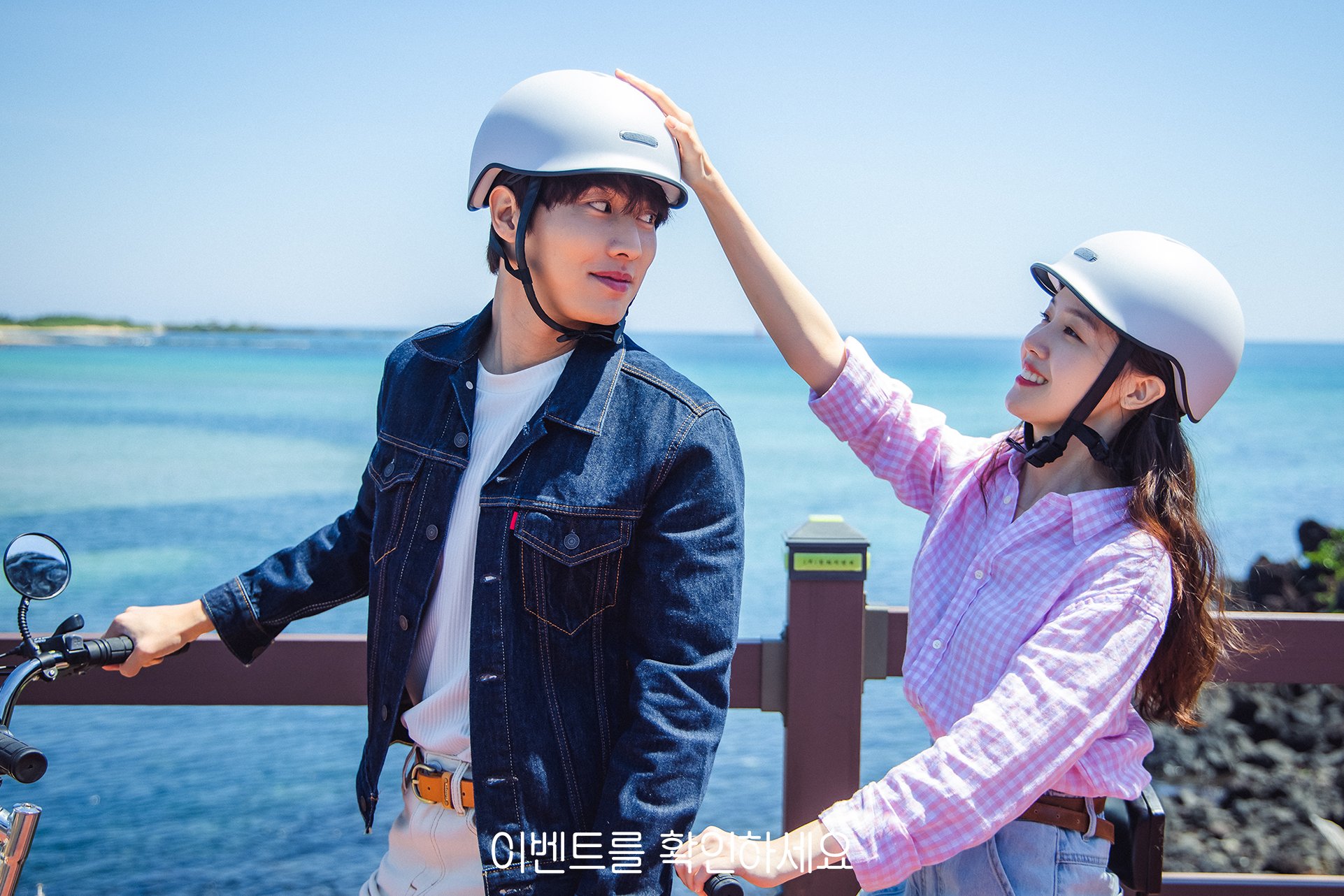 The photos also show Song Jong Ho, Noh Hyo Jung, Hyun Kyung Mi, and Kang Jae Nam. Like the trendy couple they are, Song Jong Ho and Noh Hyo Jung always take pictures at popular photo zones. In one still, they exude playful charms as they make the same pose against the backdrop of the picturesque ocean.

On the other hand, Hyun Kyung Mi and Kang Jae Nam appear to be taking at a break. Their expressions are brightly lit with affection as they pose with their hands warmly clasped together. Viewers are curious to learn about the stories of these three vastly different couples. 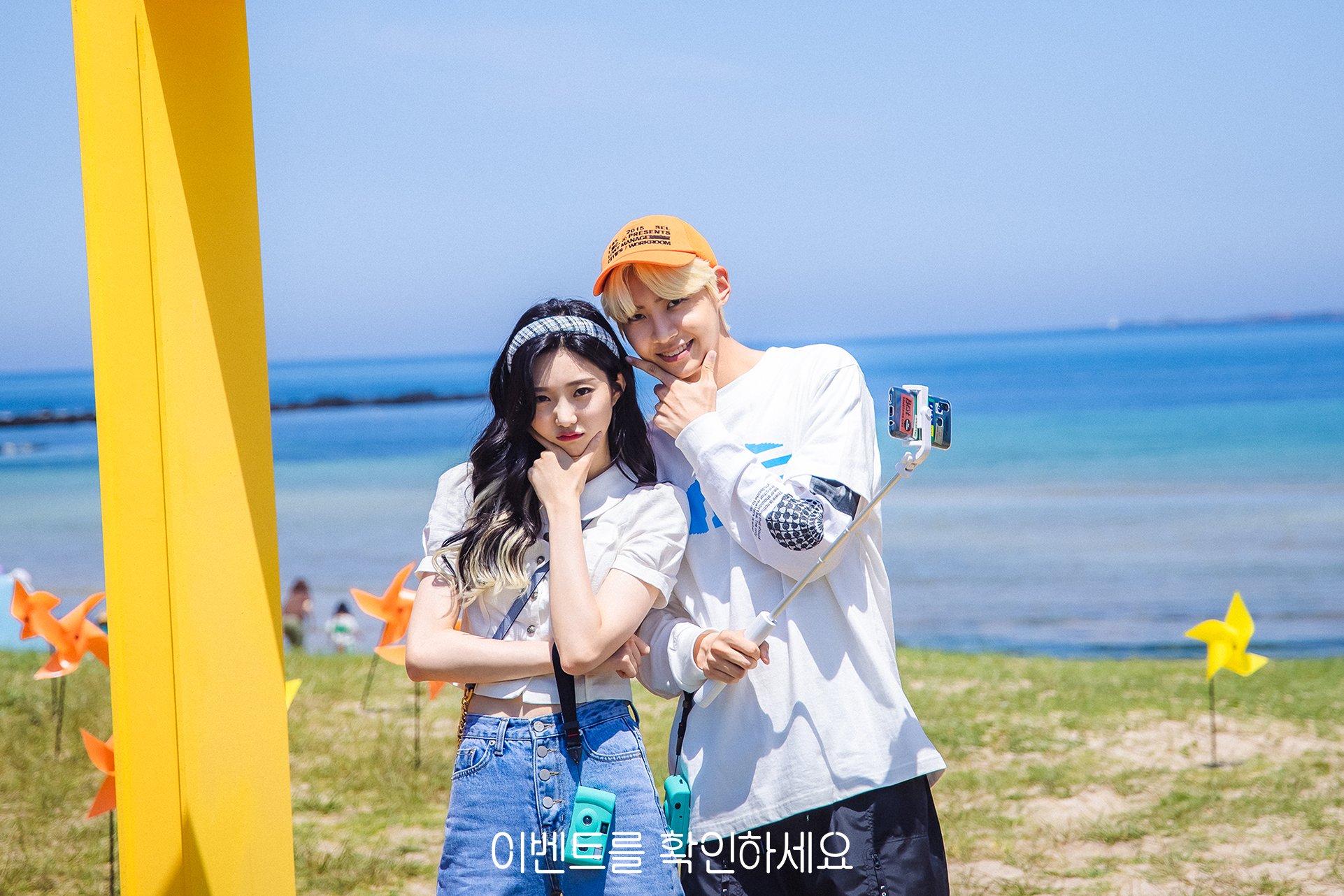 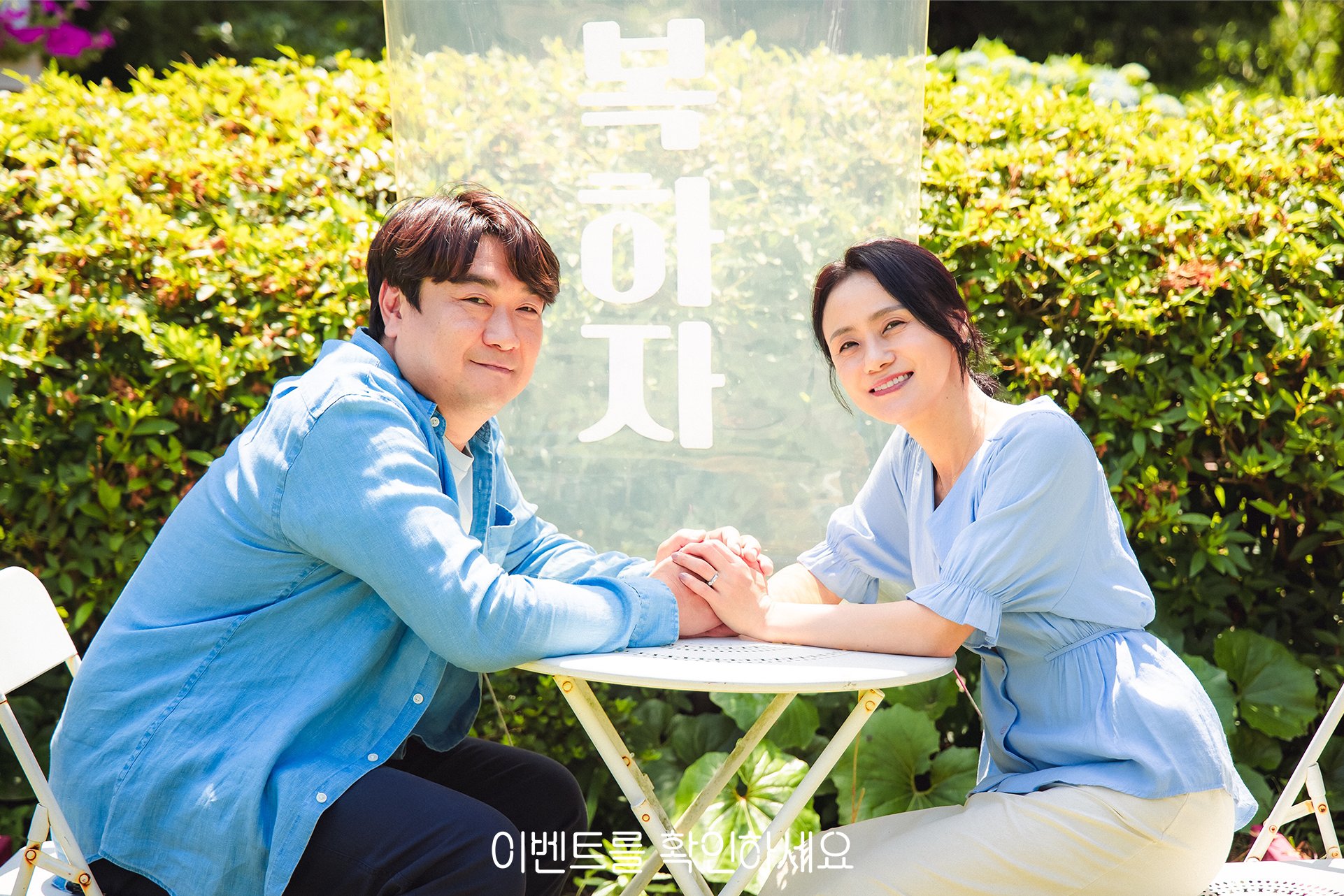 The production team shared, “We believe that viewers have already seen the beauty of Jeju Island through many dramas, movies, and variety shows. Rather than finding hidden attractions that have not been shown so far, we focused on finding places that can show the concept of couples leaving on a package tour as an event. Viewers will be able to experience more different charms.”

“Check Out the Event” premieres on August 14 at 9:50 p.m. KST and will be available with subtitles on Viki.