Lee Jung Jae, Park Hae Soo, And Wi Ha Joon Fight With Their Lives On The Line In Character Posters For “Squid Game”

“Squid Game” is a new drama about a mysterious survival game with a reward of 45.6 billion won (approximately $40 million) on the line. Lee Jung Jae and Park Hae Soo will star as two childhood friends who wind up joining the game—only to learn that there is more at stake than just the prize money.

The new stills share a look at the 456 game participants, the mysterious administrators who are wearing masks, and the place where the large-scale game takes place. The 456 contestants, who have each received a business card with a circle, triangle, and square drawn upon it, are people who have been pushed to the edge of society due to different personal reasons. 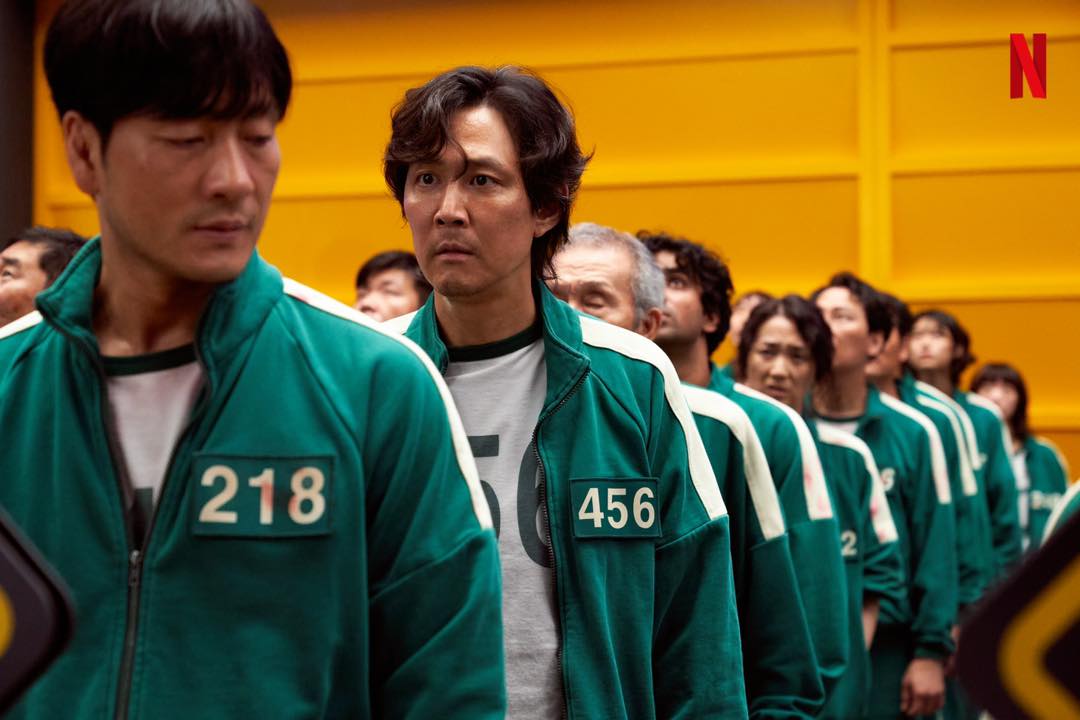 Although the contestants agreed to the unique proposal of changing their lives around with an opportunity of a lifetime, the price of the game is their lives. They soon realize that only the last person remaining can claim the prize. Director Hwang Dong Hyuk shared, “The game is a mini version of the outside world. I transferred the competition that takes place in the real world to the game exactly as it is.” As the contestants repeat the process of rallying together and betraying each other, they experience extreme struggle and despair within the game. 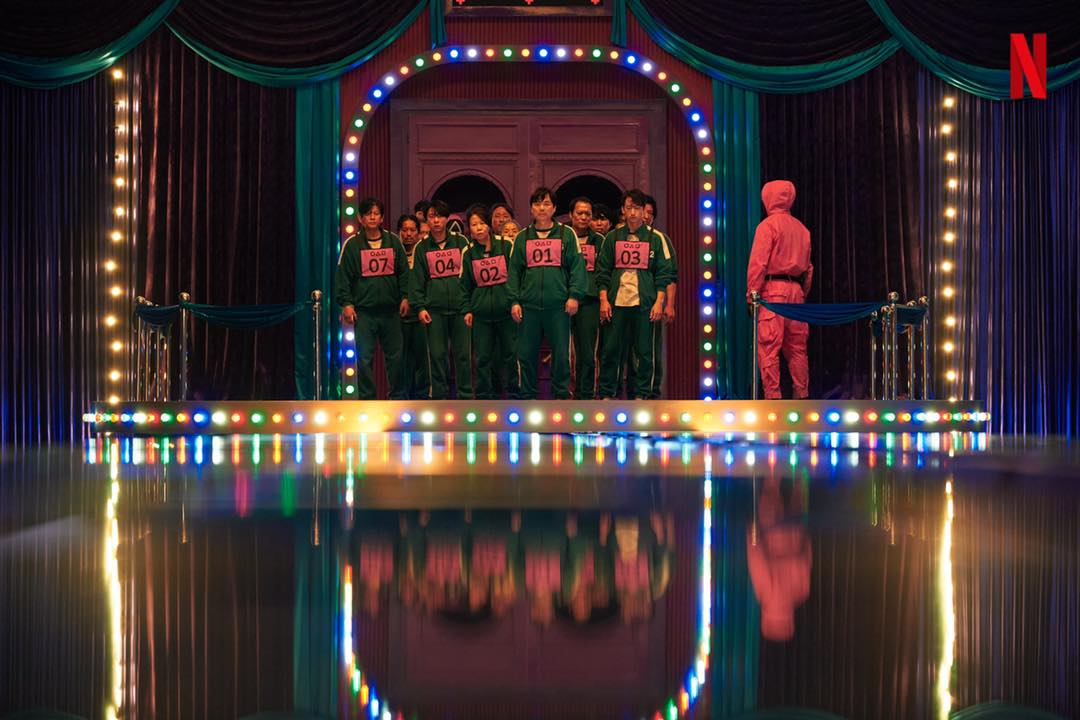 In the new stills, the actors realistically portray the unbelievable setting. Actors of all different ages, genders, and nationalities skillfully express their characters’ dilemma and anguish from facing an ironic situation in which they have to take down a stranger in order to survive. The drama will deliver a shocking and diverse story full of twists to viewers through the set-up of an extreme situation where no one can trust themselves, let alone a stranger. 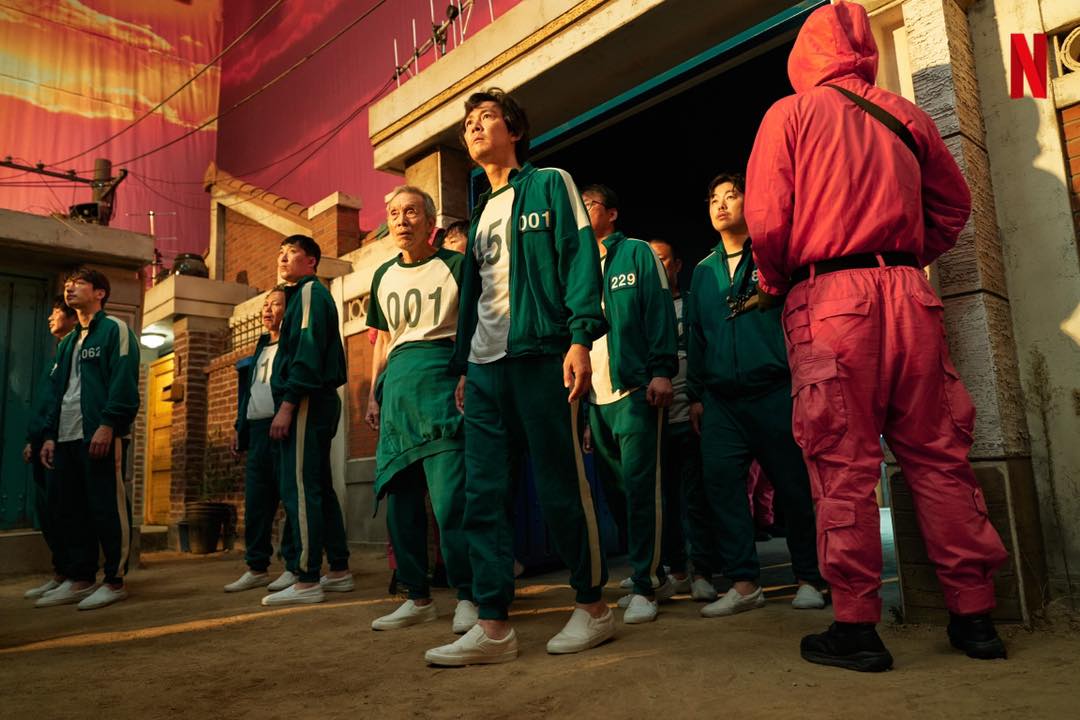 Furthermore, the masked administrators also depict a hierarchical society. The mysterious figures control the contestants while wearing masks that are divided by class with the shape of a triangle, circle, or square. The contestants wear green training suits while the game administrators sport bright pink jumpsuits, adding even greater tension to the inevitable confrontation between the two groups. Lee Jung Jae shared, “The game felt fun during the first filming, but the fear felt as the filming progressed was on another scale.” 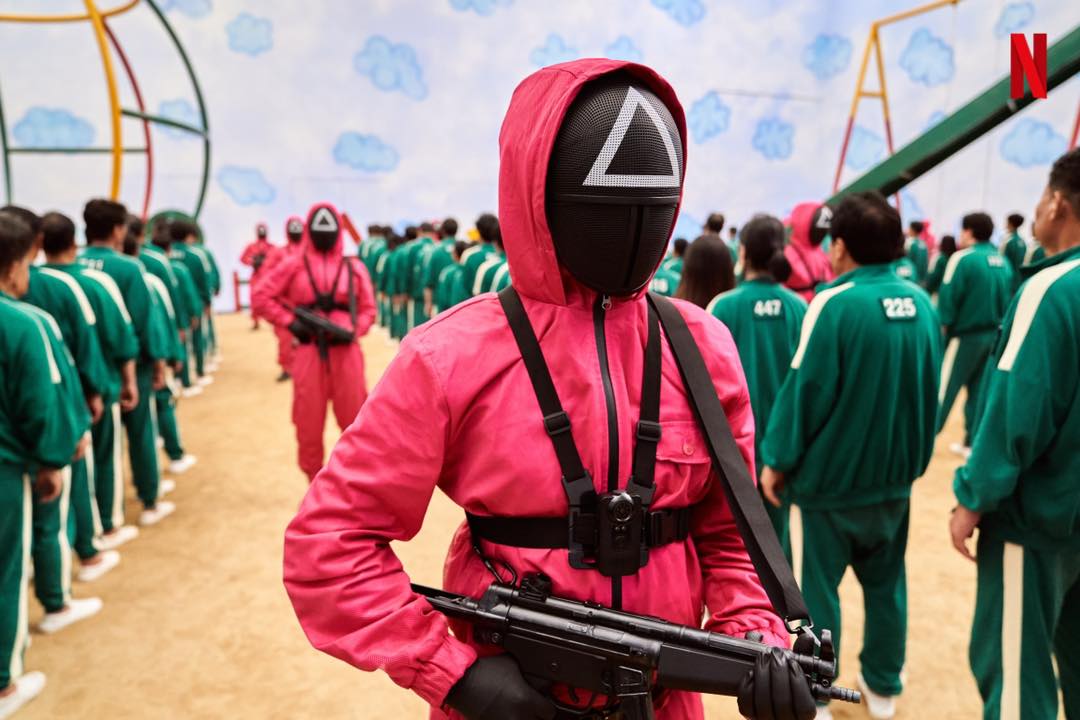 “Squid Game” also released character posters of the three main leads, clearly conveying the strain and terror the contestants experience from the game. Contestants Ki Hoon (Lee Jung Jae) and Sang Woo (Park Hae Soo), who have been left with no other options in their lives, wear intense and desperate expressions on their face. They have no choice but to survive until the end of the unpredictable game in order to claim the prize money that could flip their lives around. Ki Hoon’s poster includes a bright pink circle in front while Sang Woo’s poster is highlighted with a neon pink triangle. 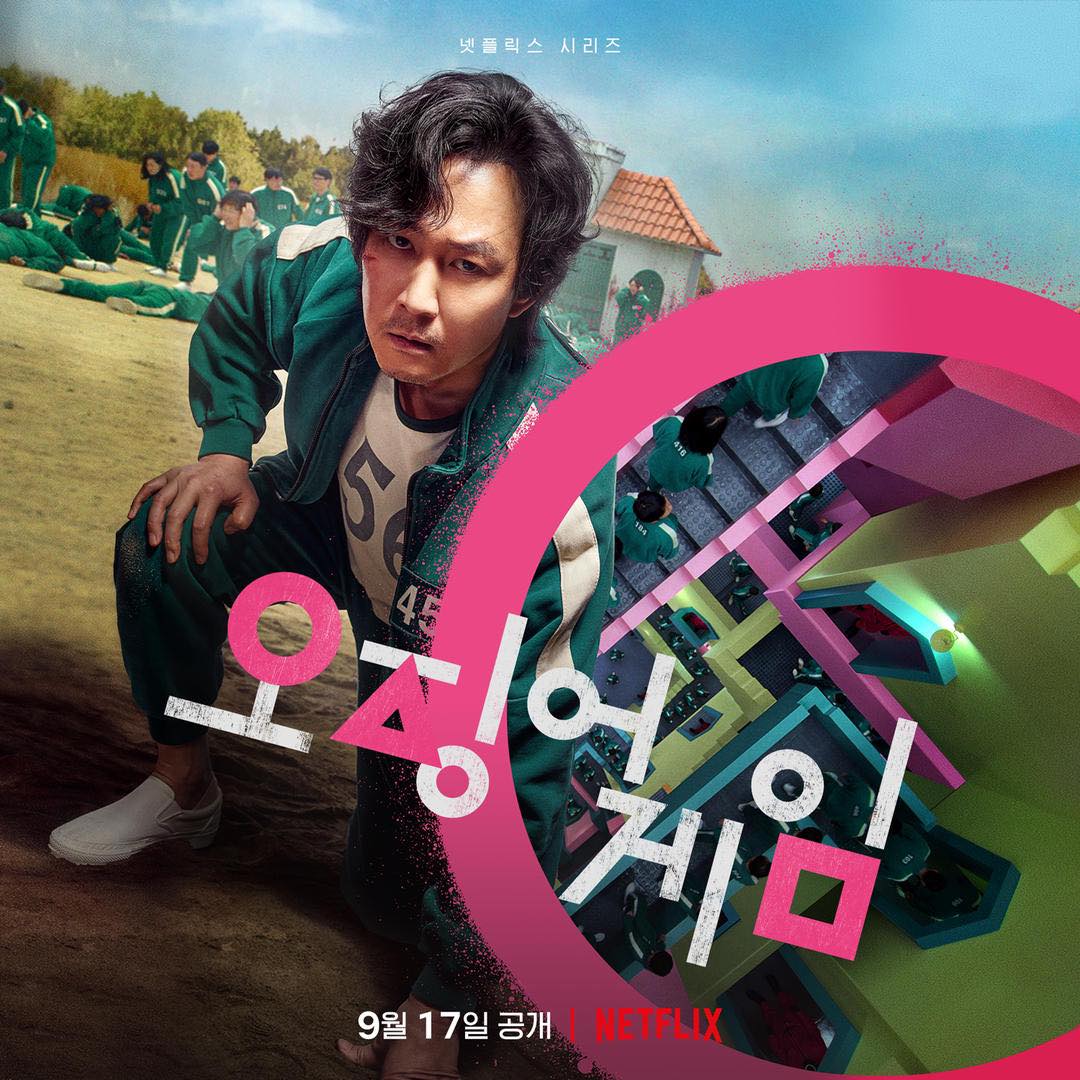 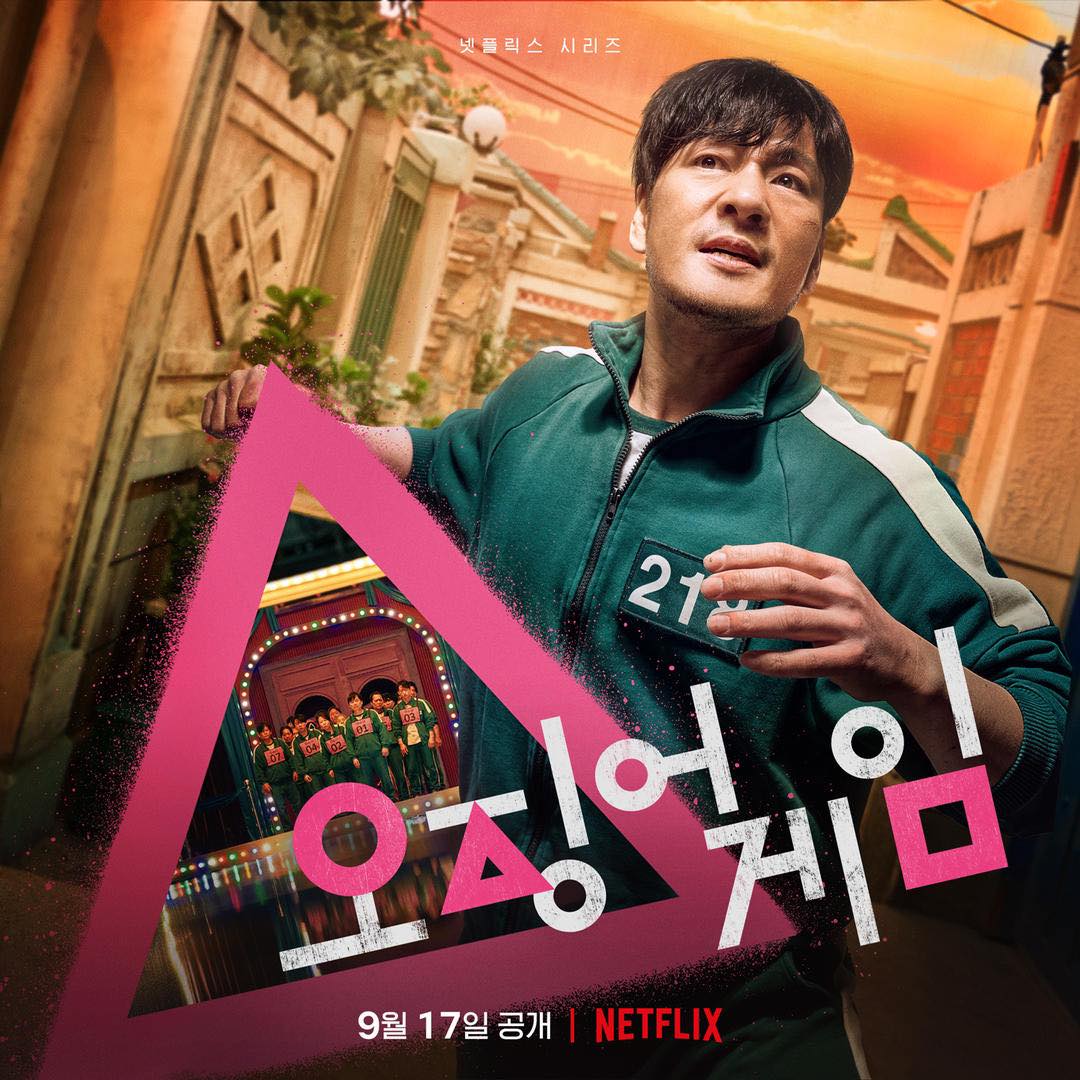 Police officer Joon Ho (Wi Ha Joon) creates a suspenseful atmosphere as he aims the gun at someone. While chasing after his missing older brother, Joon Ho follows the clue left by Ki Hoon at the police station and infiltrates the survival game. He conceals himself as an administrator and gradually approaches the hidden truth. Since Joon Ho has witnessed the two-sided nature of the game, viewers are curious to find out who he’s pointing the gun at. No one knows who started this game, adding even more elements of mystery to the drama.

Squid game is based on a children’s game enjoyed in the 70s and 80s that’s simple but competitive and violent because it has a lot of physical elements. It’s a game in which the attackers and defenders play by facing off on top of a drawing of a circle, triangle, and square, which are shapes that make up a squid.

Director Hwang Dong Hyuk shared, “I decided to use the name of this game as the title after seeing everyone, who is living in a capitalistic era, being driven out by extreme competition.” The props and rooms from each game, which uses the three basic shapes, have become a colosseum for the contestants. The shapes also represent class division, and the contestants captured within the circle, triangle, and square in the posters portray how those people are caught in an extremely competitive society.

“Squid Game” will be released on September 17. In the meantime, check out a trailer for the drama here!

While you wait for the premiere, watch Wi Ha Joon in “18 Again” below!