Cha Tae Hyun and B1A4’s Jinyoung are embodying brotherhood at its peak in “Police University”!

The KBS drama is about the chaotic investigation that ensues when a professor at an elite police university teams up with a student who happens to be a genius hacker. Jinyoung and f(x)’s Krystal star as university students Kang Sun Ho and Oh Kang Hee, while Cha Tae Hyun stars as passionate detective-turned-professor Yoo Dong Man.

Yoo Dong Man and Kang Sun Ho first met as a police officer and a hacker and reunited as professor and student. While they had tension at first, it was resolved when they later found out that they had been each other’s closest online friend all this time. Their relationship is continuing to grow stronger as they face and conquer challenges and investigations as a team. Here are three moments where their “bromance” really stood out!

An intense investigation led to Yoo Dong Man and Kang Sun Ho catching the owner of a restaurant on campus, Go Duk Bae (Shin Seung Hwan), in suspicious activity. Not wanting to put others in danger, Yoo Dong Man decides to step down from being a professor at the Police University and pursue the investigation alone. Despite these efforts, Kang Sun Ho gathers a group of friends to continue tackling the case.

At one point, Kang Sun Ho tracks a suspicious signal from a phone to a street in a part of town foreigners frequent. There, he runs into Yoo Dong Man and tells him in an intensely emotional scene, “The last response on the exam for forensic investigation, for the one thing you must have for an investigation. I answered, ‘partner.'” Like this, Kang Sun Ho expressed his true feelings for Yoo Dong Man.

The case of perfect teamwork

The professor-student combination warmed the hearts of many with their fearless attitude in taking on danger in order to protect the other. After learning from Oh Kang Hee that an illegal gambling crew was planning to open a website for VIP clients, Kang Sun Ho tracked down the IP address and located their headquarters. But on the day of the event, the data is exposed and the website’s self-destructing software kicks in. Not giving up, Yoo Dong Man and Kang Sun Ho head to the scene to find the culprit, Go Duk Bae.

A fierce fight breaks out among the three and Go Duk Bae heads in for a critical hit on Kang Sun Ho. Just then, Yoo Dong Man thrusts himself in between them trying to take the hit instead. Having dodged the hit, Kang Sun Ho manages to get Go Duk Bae in handcuffs, putting an end to the thrilling encounter. This incident showed the duo’s exquisite teamwork while keeping viewers on the edge of their seats.

Protecting one another at all costs

Despite getting Go Duk Bae behind bars, eerie incidents continue to occur, giving off a sense that the case still has loose ends. Kang Sun Ho is blackmailed through online chatting by someone that knows he was previously investigated on charges of illegal hacking. Yoo Dong Man undergoes a mysterious car accident. When Kang Sun Ho visits his professor and partner in the hospital, he finds three suspects listed in Yoo Dong Man’s detective notebook, “Kwon Hyuk Pil, Choi Hee Soo, Seo Sang Hak.”

After initially being in shock at the names, Kang Sun Ho quickly applies his hacking abilities to identify another suspect, Jang Jae Gyu (Lee Sung Woo). Later on, he holds the man hostage in a PC cafe and questions him about the truth with absolutely no mercy. Viewers will have to wait and see if Kang Sun Ho will be able to catch the real culprits while keeping Yoo Dong Man safe. 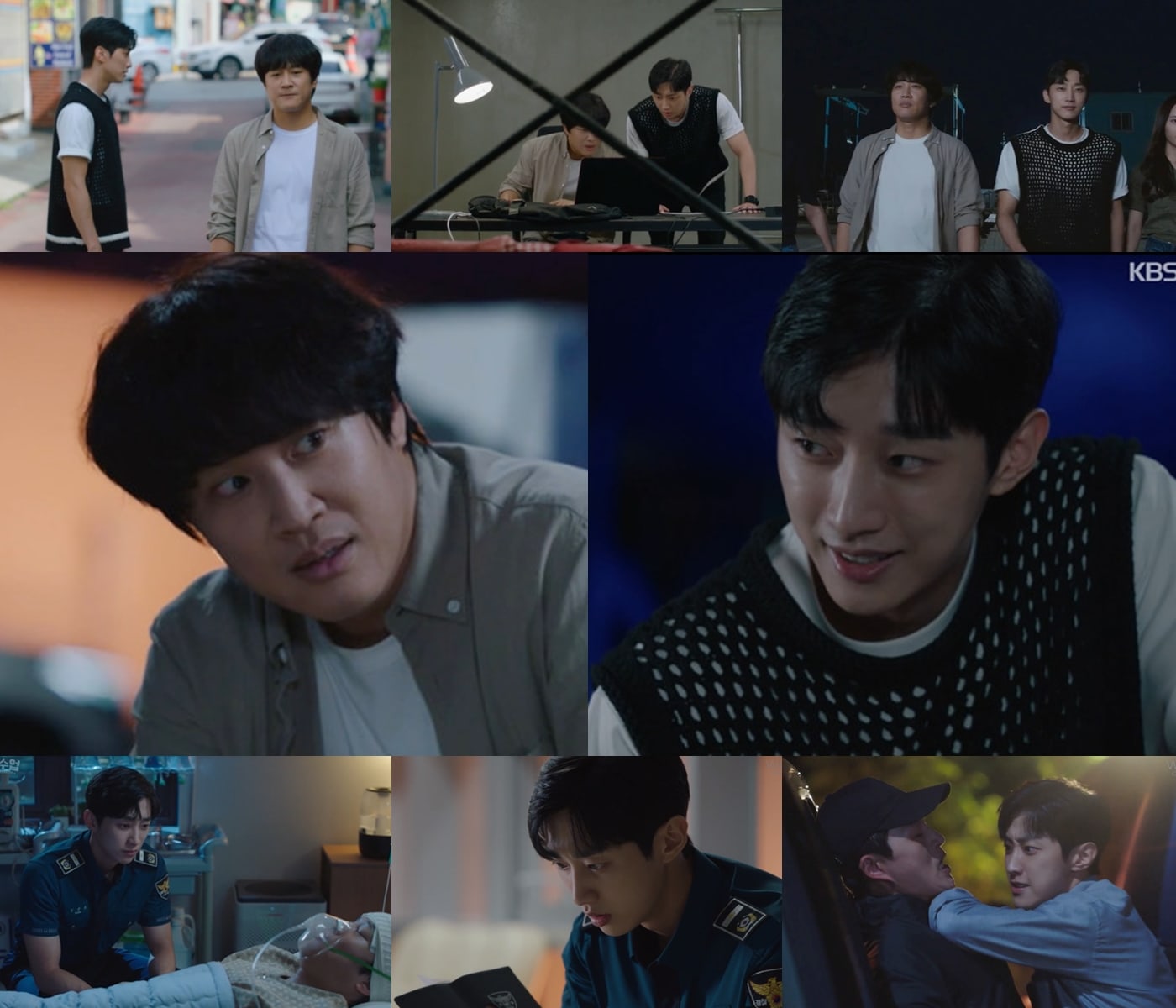 “Police University” airs every Monday and Tuesday at 9:30 p.m. KST.

Catch the bromance in “Police University” with English subtitles here!