Would you have liked to see Kim Soo Hyun in “Squid Game”? The actor thinks he would have blended in well!

The hit drama “Squid Game” is about a mysterious survival game with a reward of 45.6 billion won (approximately $40 million) on the line. 456 money-hungry participants wind up joining the game—only to learn that there is more at stake than just the prize money.

On October 2, FTISLAND’s Lee Hong Ki uploaded to his Instagram Stories a photo Kim Soo Hyun had shared with him. Lee Hong Ki wrote on top of the image, “He sent me this photo saying he could have appeared [on ‘Squid Game’] too… haha hyung.. then you would have been the first one to die hahaha.” Kim Soo Hyun and Lee Hong Ki are known to be close friends. 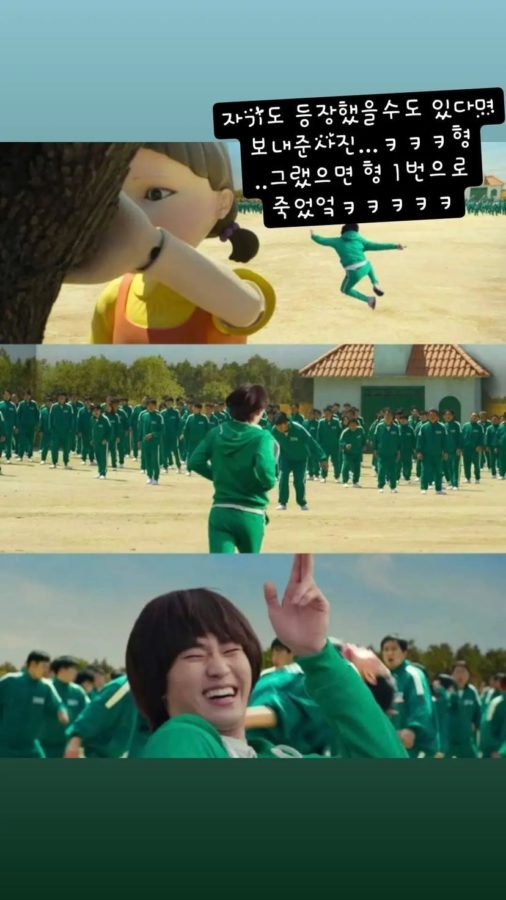 The photos are still cuts from “Squid Game” photoshopped with screenshots of Kim Soo Hyun’s past cameo appearance from tvN’s “Crash Landing on You” as his character Won Ryu Hwan from the 2013 movie “Secretly, Greatly.”

Won Ryu Hwan is a North Korean spy who is deployed to South Korea, where he pretends to be the village idiot Bang Dong Goo who is always wearing his trademark green track suit. The character blends in with the other “Squid Game” actors clad in green as if he was meant to be there.

Kim Soo Hyun’s movie character may not survive “Squid Game,” but would you? Take the quiz here to find out!