On the October 19 episode of KBS’s “Problem Child in House,” Jun So Min and Park Sung Hoon appeared as guests.

Jun So Min and Park Sung Hoon are starring together in the 2021 KBS Drama Special “Hee Soo,” a sci-fi thriller about a married couple mourning the loss of their young daughter and the virtual reality technology that creates a rift between them.

On “Problem Child in House,” Jung Hyung Don asked how the two had become friends. Park Sung Hoon explained, “Four years ago, we worked on a KBS drama special together called ‘Review Notebook of My Embarrassing Days.’ We became close while filming that.”

Jun So Min said, “According to him, we became close friends in a really short amount of time. I didn’t know that we’d become friends. When I met him, I thought, ‘It seems like he’s the type of actor it’s hard to get close to.’ He didn’t smile a lot and he gave off a cold feeling.” Park Sung Hoon added, “I’m very shy around people.” 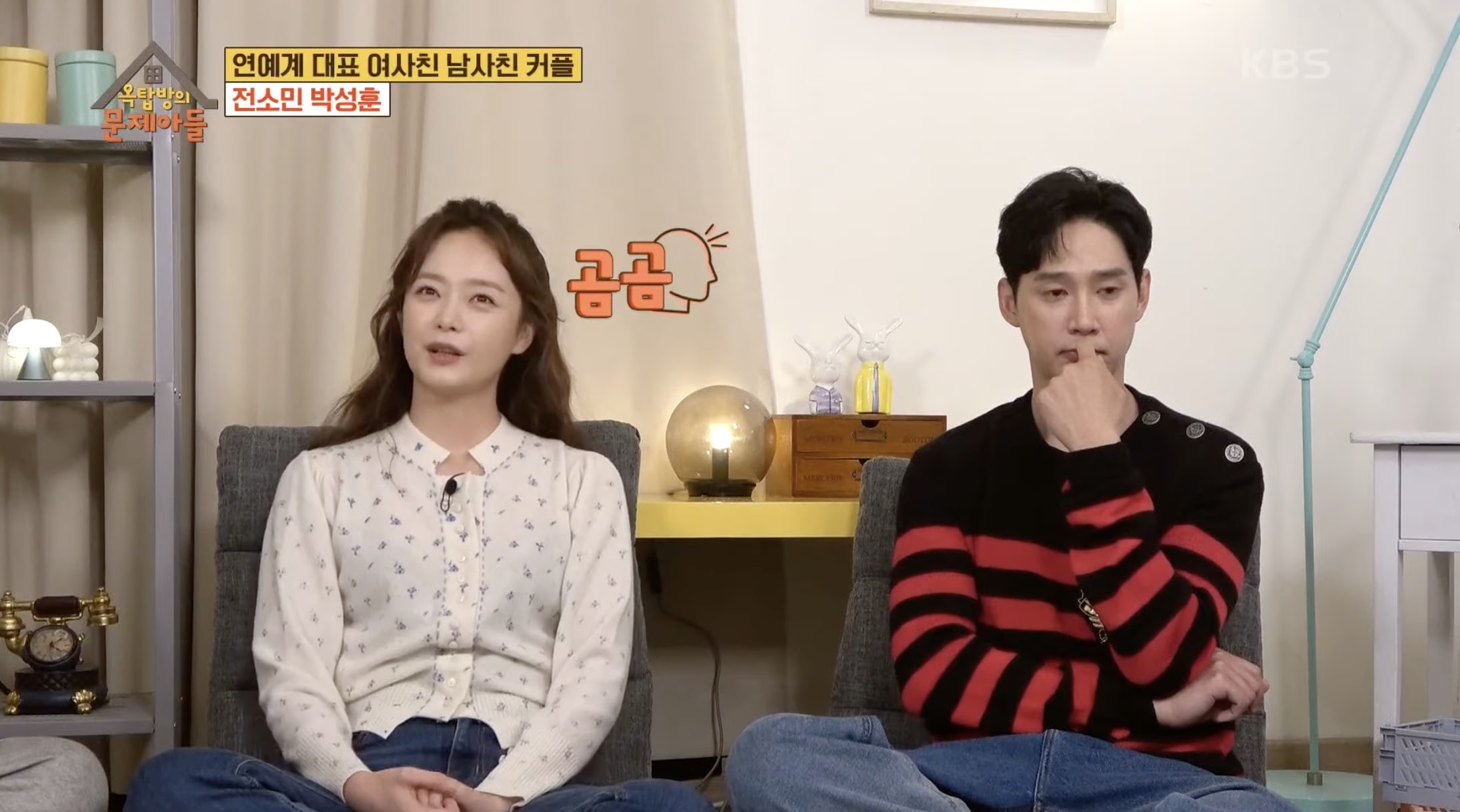 Song Eun Yi brought up Jun So Min’s “love line” with Yang Se Chan on “Running Man,” where the cast members tease each other about their potential for a romantic relationship.

Song Eun Yi said, “I don’t know if you know this, but I’ve seen you before. No one else knows this but me, but I’ve actually wondered, ‘Is she really dating Yang Se Chan?’ before. I went to evening service at a different church once and a short man and a tall man and woman came in. It was Lee Kwang Soo, Yang Se Chan, and Jun So Min. They were sitting in front of me. She kept chatting to Yang Se Chan.”

Kim Sook chimed in, “Was Lee Kwang Soo just a smokescreen? Were you really dating?” but Jun So Min strongly denied it. 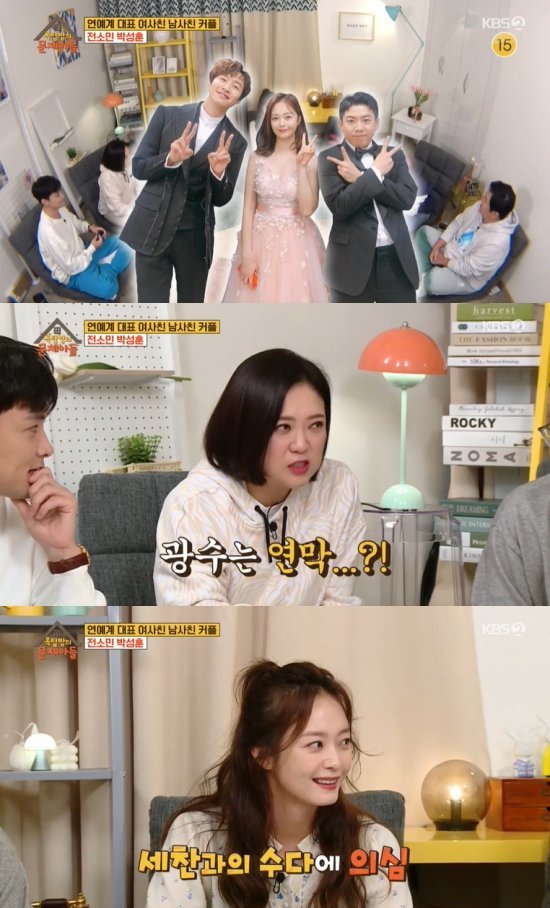 Song Eun Yi also brought up the fact that Jun So Min’s kiss scene with Ha Seok Jin in the drama “1% of Something” had over 10 million views on YouTube. Asked by Min Kyung Hoon if she had done anything differently for that scene, Jun So Min replied, “I think that there were a lot of actions that made the scene sweeter. Like brushing back the girl’s hair. We exchanged very deep looks before the kiss scene. There’s also the fact that it started light and deepened into a real kiss. I think that people felt that it was very multifaceted.” 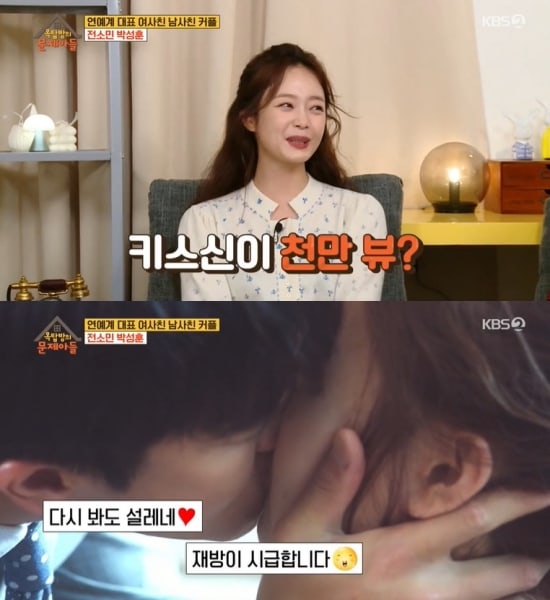 Park Sung Hoon was also asked about a memorable kiss scene he had filmed. “I did one with Hong Eun Hee in a play called ‘Melodrama,'” he said. “Yoo Joon Sang [Hong Eun Hee’s husband] came to watch one of the performances. After the play ended, I was taking off my makeup when he knocked on my door and said, ‘Who is Sung Hoon?’ He then said to me, ‘You know it’s all acting, right? Great. I enjoyed watching it. Bye.'” 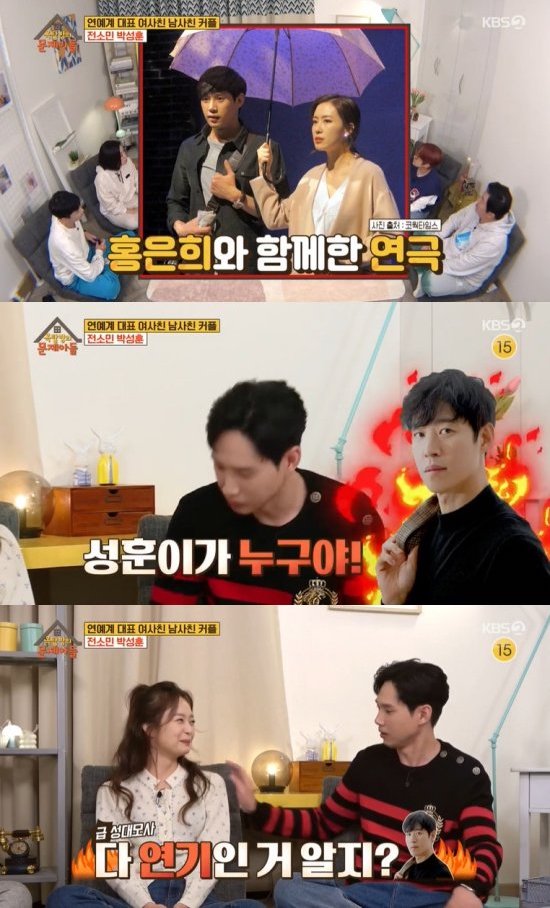 Song Eun Yi asked the two of them about their dating styles. Park Sung Hoon said, “I talked about this with So Min before, about how we’d react if our significant partners helped someone else with their chopsticks. I said that I wouldn’t mind if my girlfriend did that, or even made a wrap for her close male friend and fed it to him.”

Jung Hyung Don commented, “Is that just a front to make yourself look cool?” and Park Sung Hoon joked, “I want to be more like that.” Park Sung Hoon has been publicly dating actress Ryu Hyun Kyung since March 2017.

Jun So Min shared she was the opposite and said, “I wouldn’t want my boyfriend to meet another woman just the two of them alone. They can go with other people. I have standards like that. Also not too late at night.” Park Sung Hoon replied, “I’d be okay with my girlfriend going alone with a male friend. I don’t even care if they drink together or if she doesn’t pick up my calls. I think it would be a problem if they did it secretly without telling me.”