Jung Ho Yeon Dishes On The Biggest Change In Her Life Since “Squid Game,” Recent Win Against Boyfriend Lee Dong Hwi, And More

“Squid Game” star Jung Ho Yeon has shared how she got into acting, the biggest change in her life since appearing in the show, and more!

On the October 20 episode of tvN’s “You Quiz on the Block,” Jung Ho Yeon appeared as a guest. She explained that she was busy these days with a jam-packed schedule and revealed that she had just finished filming for the “The Tonight Show Starring Jimmy Fallon” earlier that morning.

Yoo Jae Suk most recently worked with Lee Dong Hwi on MBC’s “How Do You Play?” when the actor became a member of the project group MSG Wannabe. Jung Ho Yeon shared, “He was so proud after going on ‘How Do You Play?’ and doing well. That’s why I kept saying that I was going to at least appear on ‘You Quiz on the Block’ before him. I had no idea that would actually happen, but I came here first.” When asked how she felt about this, Jung Ho Yeon replied with a huge smile, “It was sweet.” 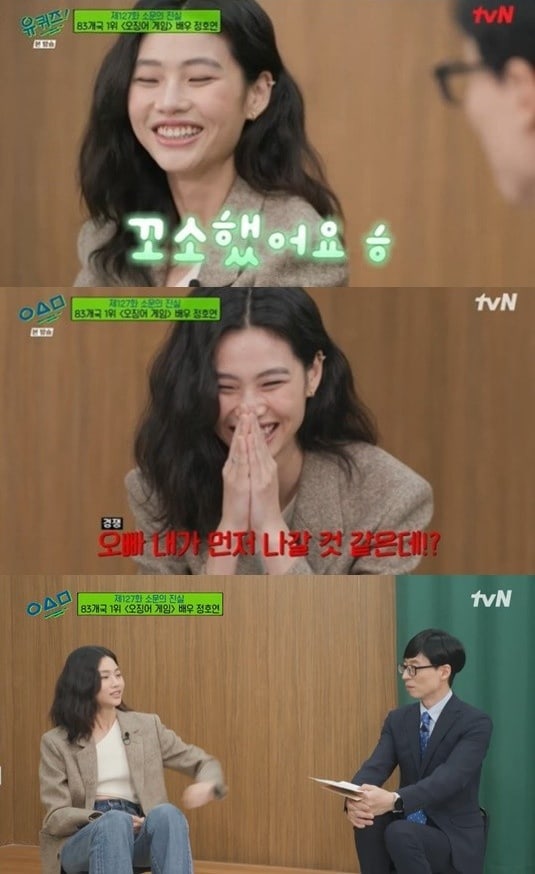 When asked about the biggest change in her life after “Squid Game,” Jung Ho Yeon answered, “I get a ton of commercial offers. It’s so fascinating. I’m being contacted by almost all the brands that the majority of people know.”

She also revealed that she had gained over 14 million followers on Instagram at the time of filming (though she now sits at 21.7 million as the most-followed Korean actress on the platform).

Many famous foreign stars have shown their love for “Squid Game” by following Jung Ho Yeon on Instagram, including Drew Barrymore, Pharrell Williams, Zendaya, and The Weeknd, with the latter even posting a photo of her and Lee Yoo Mi on his story. She excitedly commented, “I followed them back.” 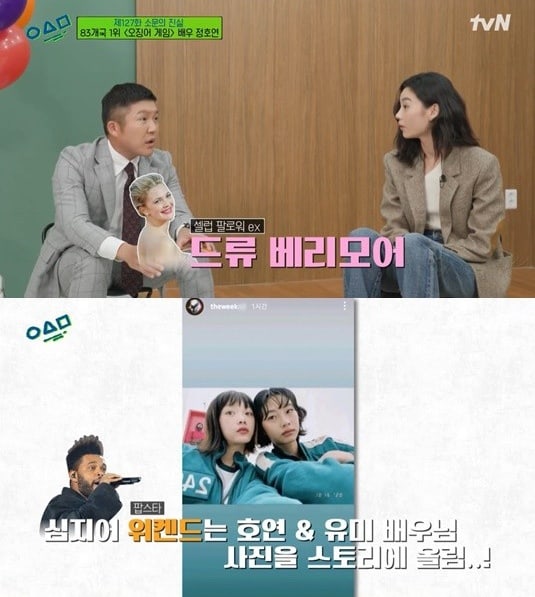 However, she added, “While I’m so thankful, there was also a time when I cried in front of my friend out of fear. My friend told me then, ‘Snap out of it. It’ll disappear soon.’ Those words became courage for me. I’m trying to move forward while thinking that I should experience feeling all these emotions, then start anew.”

Jung Ho Yeon was asked about her transition from modeling into acting and she responded, “It’s true that I had a great career as a model. However, there were a lot of ups and downs within me. My career was rising overseas, but then I started to lose jobs one by one, and my shows were cancelled one by one. I experienced slowly drifting apart from that place. That was the moment I decided, ‘I have to officially try acting.'”

The actress continued, “Models have a lot of alone time. What you can do in that time is read or watch movies. From a certain point on, those became my hobbies. I thought that it’d be good if I could also try out these expressions, and I think escaping reality became my motivation.”

In a previous interview, Jung Ho Yeon touched on how nervous she was for her audition and that those nerves did not subside while filming. She explained, “I felt a lot of pressure, thinking, ‘Will I be able to do this?’ I don’t think I was able to escape that nervousness for a very long time.” She then expressed her gratitude to her co-star Lee Yoo Mi and added, “Thankfully, I had a friend named Yoo Mi by my side. I think we were able to endure it by leaning on each other.” 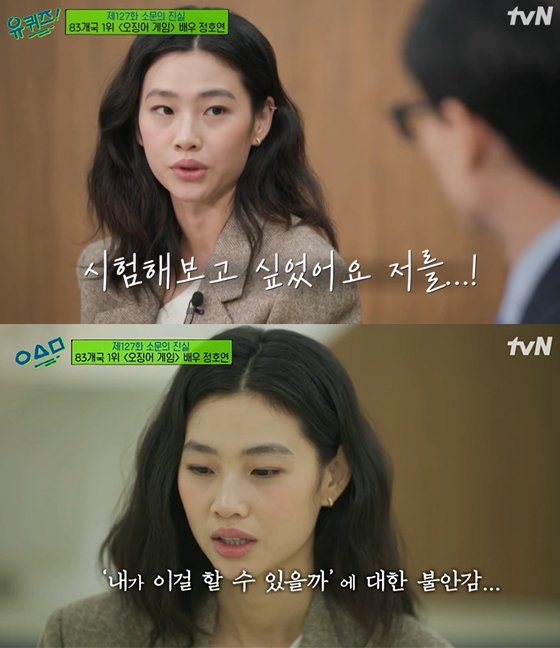 Looking back on the set of “Squid Game,” the actress shared, “The director is amazing. Even while filming the script that he wrote, he was always pondering and discussing it with other people. The atmosphere on set was so good. Lee Jung Jae always approached me comfortably.”

Yoo Jae Suk mentioned that Jung Ho Yeon had named her co-star Oh Young Soo as her role model, and the actress referred back to their tug-of-war scene. Expressing her admiration for the actor, she remarked, “He had a really long line, but he memorized it in one go and did it in one try without getting it wrong.” 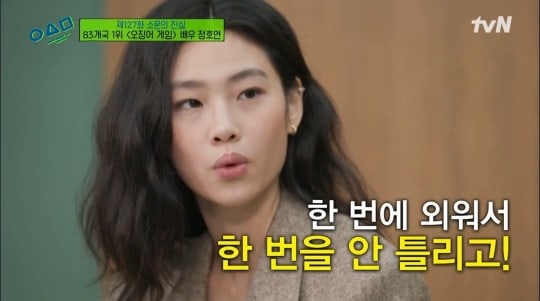 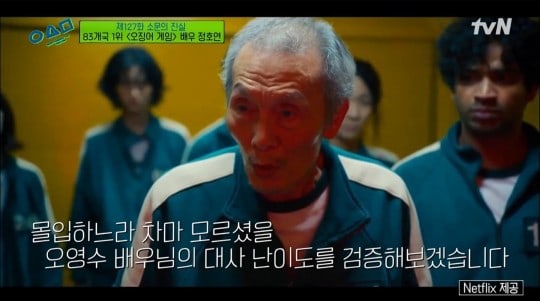 Lee Dong Hwi
Jung Ho Yeon
You Quiz on the Block
Squid Game
How does this article make you feel?