Lim Young Woong’s “Love Always Run Away,” released for the “Young Lady and Gentleman” OST, topped the October digital chart, which calculates total scores based on streams, downloads, and BGM sales. The Kid LAROI and Justin Bieber’s “Stay” dropped one spot to No. 2, while aespa’s “Savage” made a strong entrance at No. 3. Lee Mujin’s “Traffic light” took No. 4, and Coldplay and BTS’s “My Universe” rose 46 spots to No. 5. 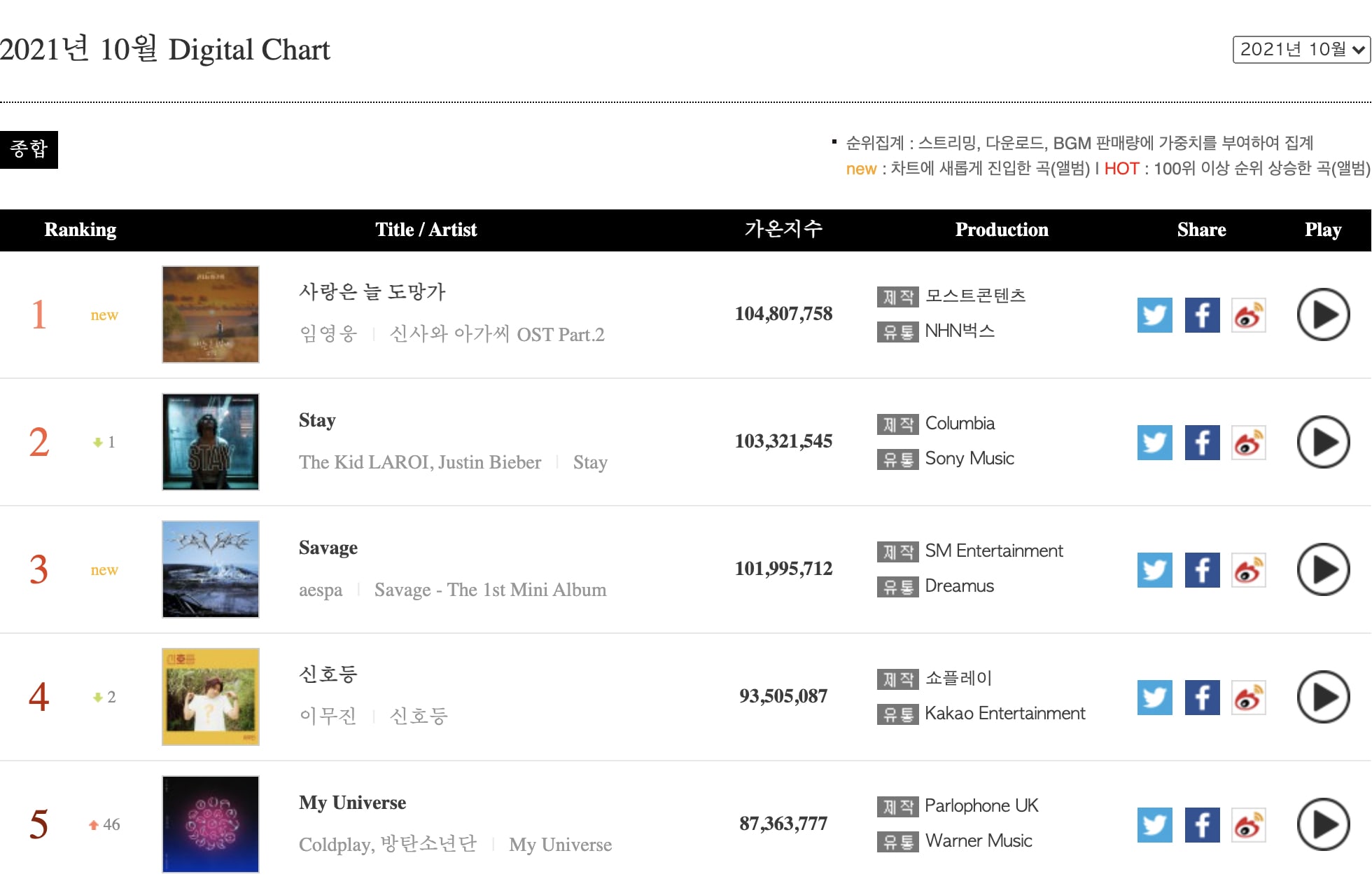 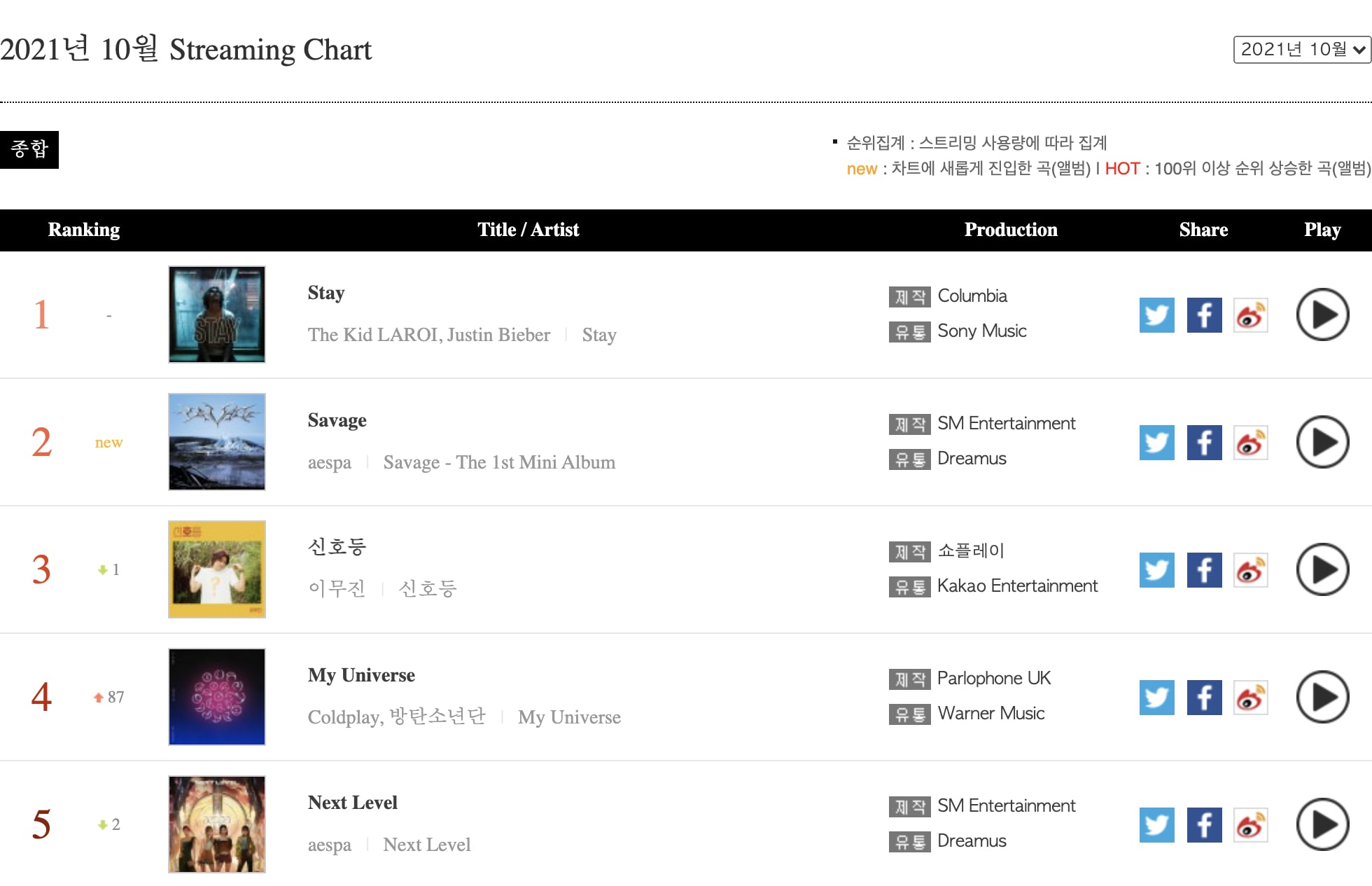 The download chart for October was dominated by new releases, with Lim Young Woong’s “Love Always Run Away” taking the top spot. SEVENTEEN’s “Rock with you” and NCT 127’s “Favorite (Vampire)” ranked No. 2 and No. 3, respectively. IU’s “strawberry moon” entered at No. 4, and aespa’s “Savage” placed No. 5. 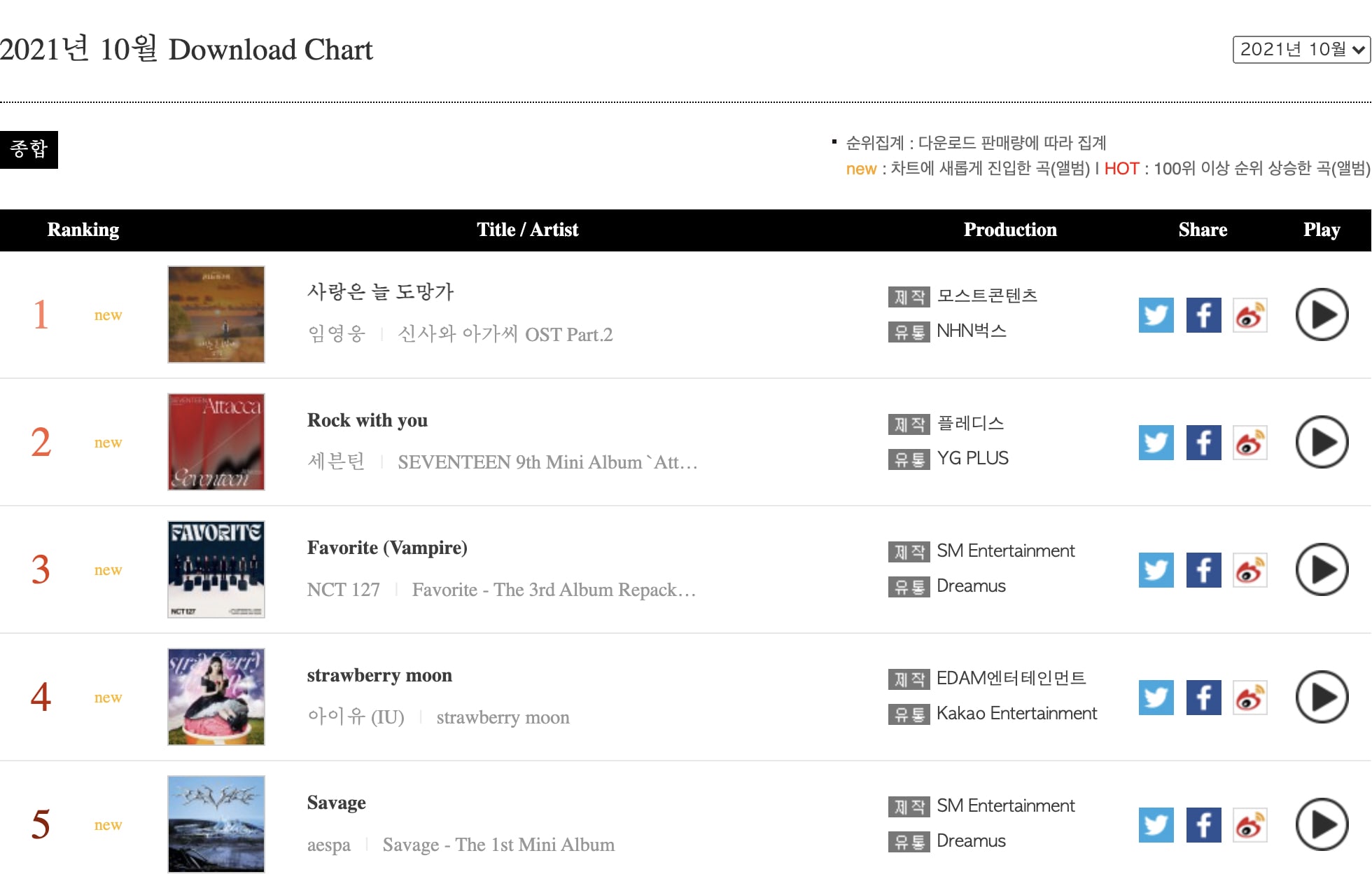 SEVENTEEN’s “Attacca” debuted at No. 1 on the album chart recording physical album shipments, while ENHYPEN’s “DIMENSION : DILEMMA” followed at No. 2. NCT 127’s “Favorite” ranked No. 3, and aespa’s “Savage” took No. 4. ITZY’s “CRAZY IN LOVE” drops one spot down to No. 5 . 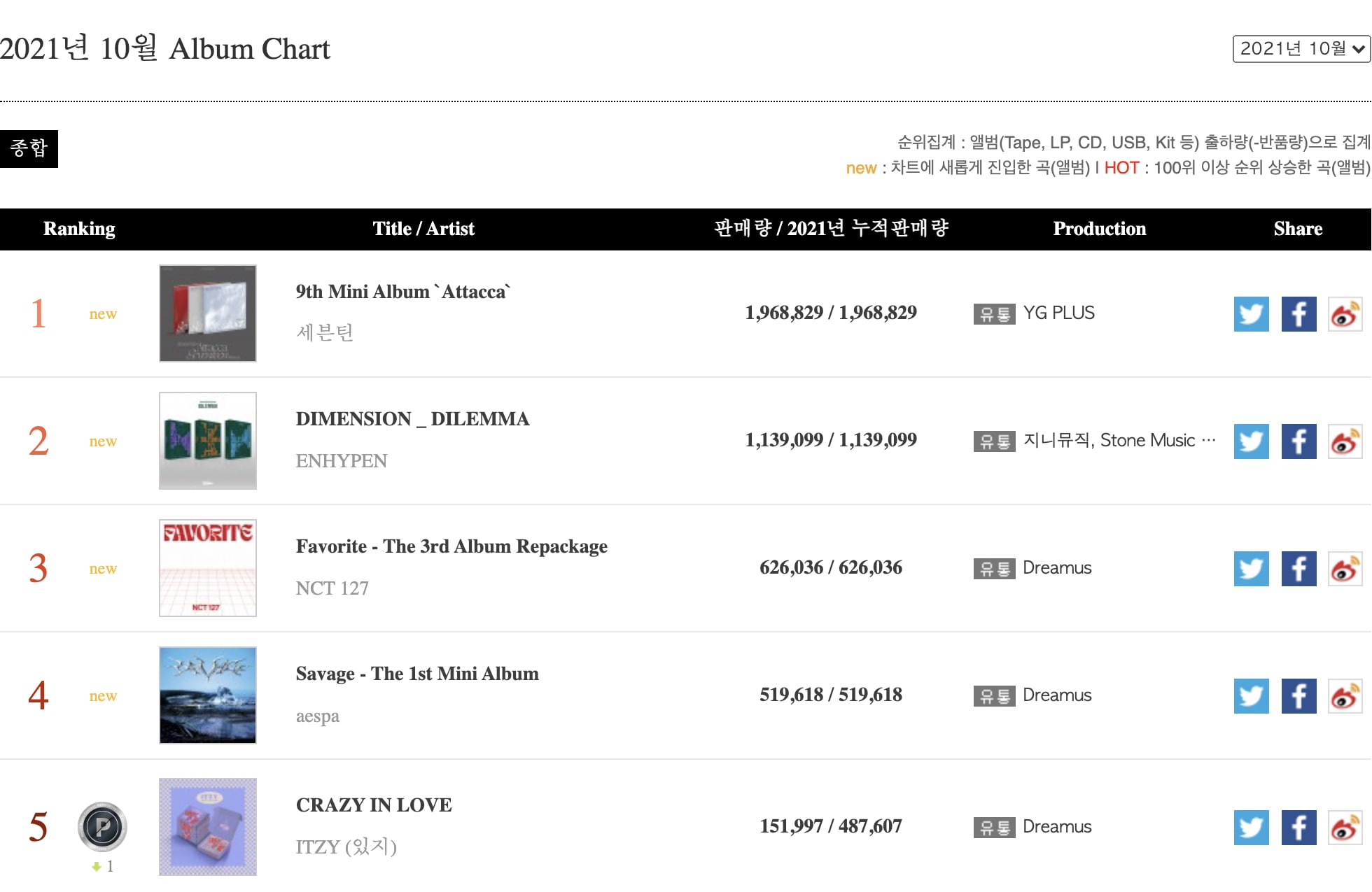 IU’s “strawberry moon” remained on top of the overall weekly digital chart for the third consecutive week. aespa’s “Savage,” The Kid LAROI and Justin Bieber’s “Stay,” and Lee Mujin’s “Traffic light” each rose slightly to take the next three spots. Lim Young Woong’s “Love Always Run Away” fell one spot to No. 5. 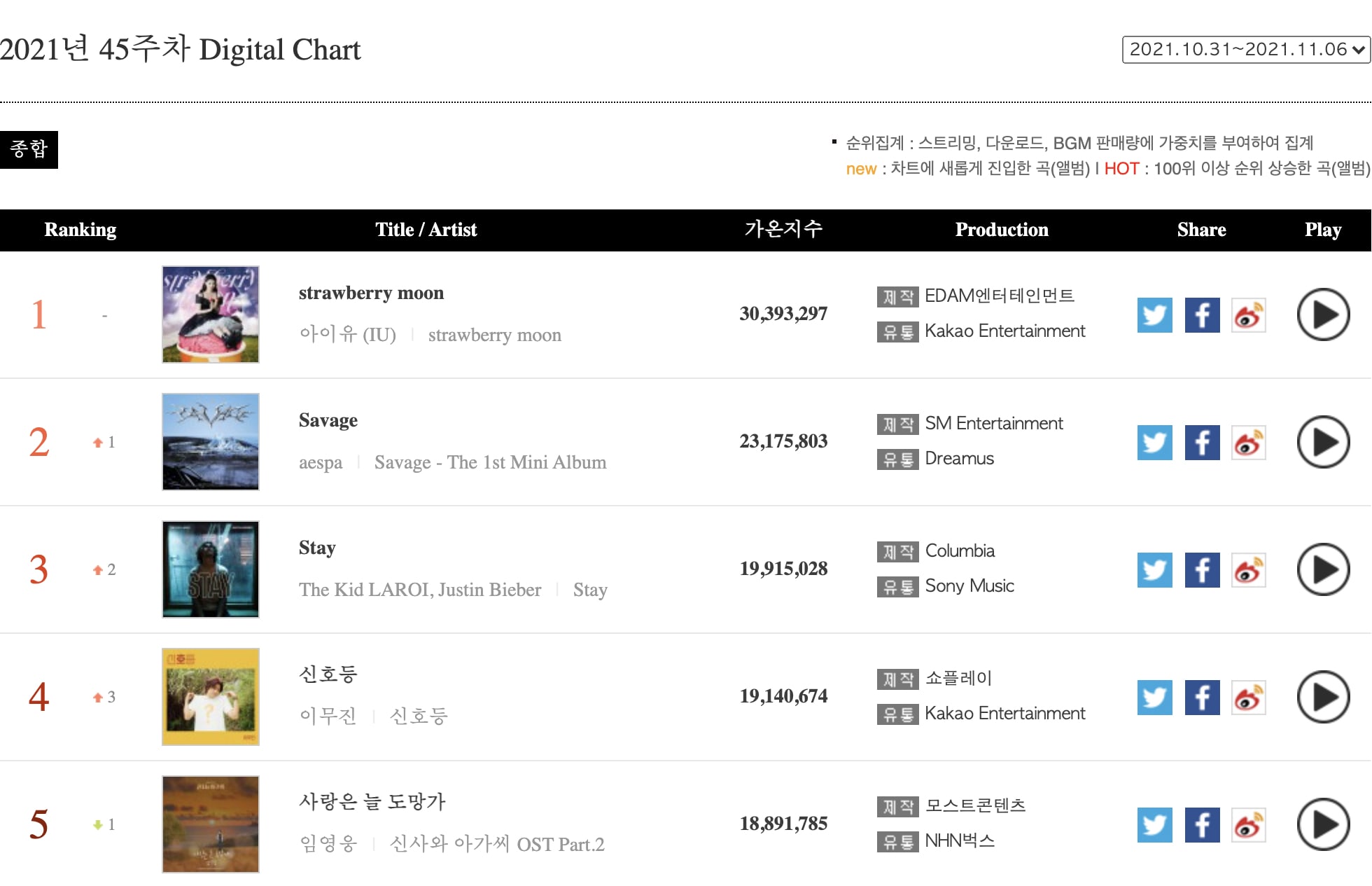 The top five of the streaming chart remains the same as last week, with the top four identical to the weekly digital chart and aespa’s “Next Level” at No. 5. 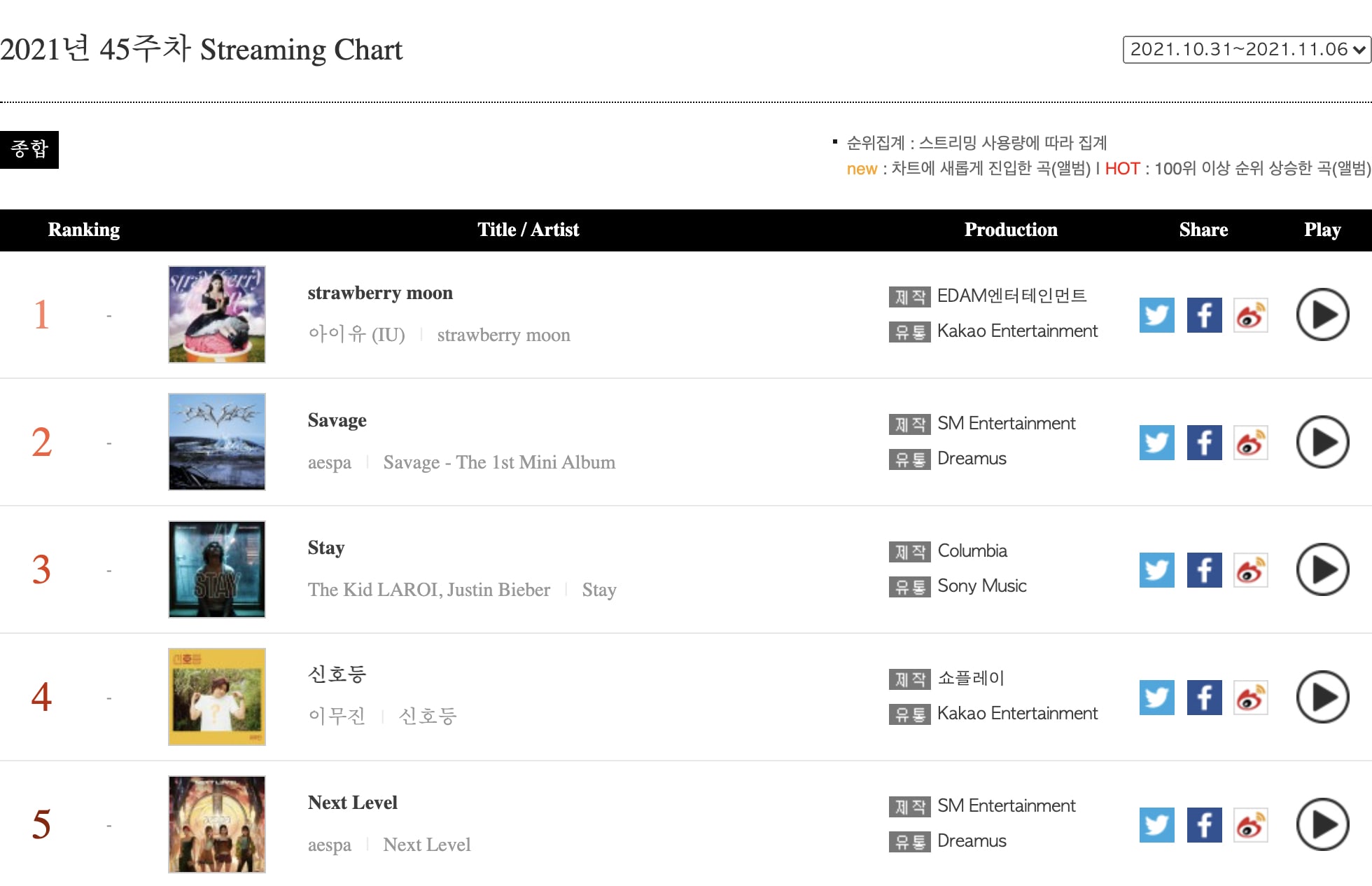 THE BOYZ’s “MAVERICK” made a strong entrance on the weekly download chart at No. 1. SEVENTEEN’s “Rock with you” and Lim Young Woong’s “Love Always Run Away” maintained the next two spots, while NCT 127’s “Favorite (Vampire)” dropped to No. 4. Super Junior D&E’s “ZERO” debuted at No. 5. 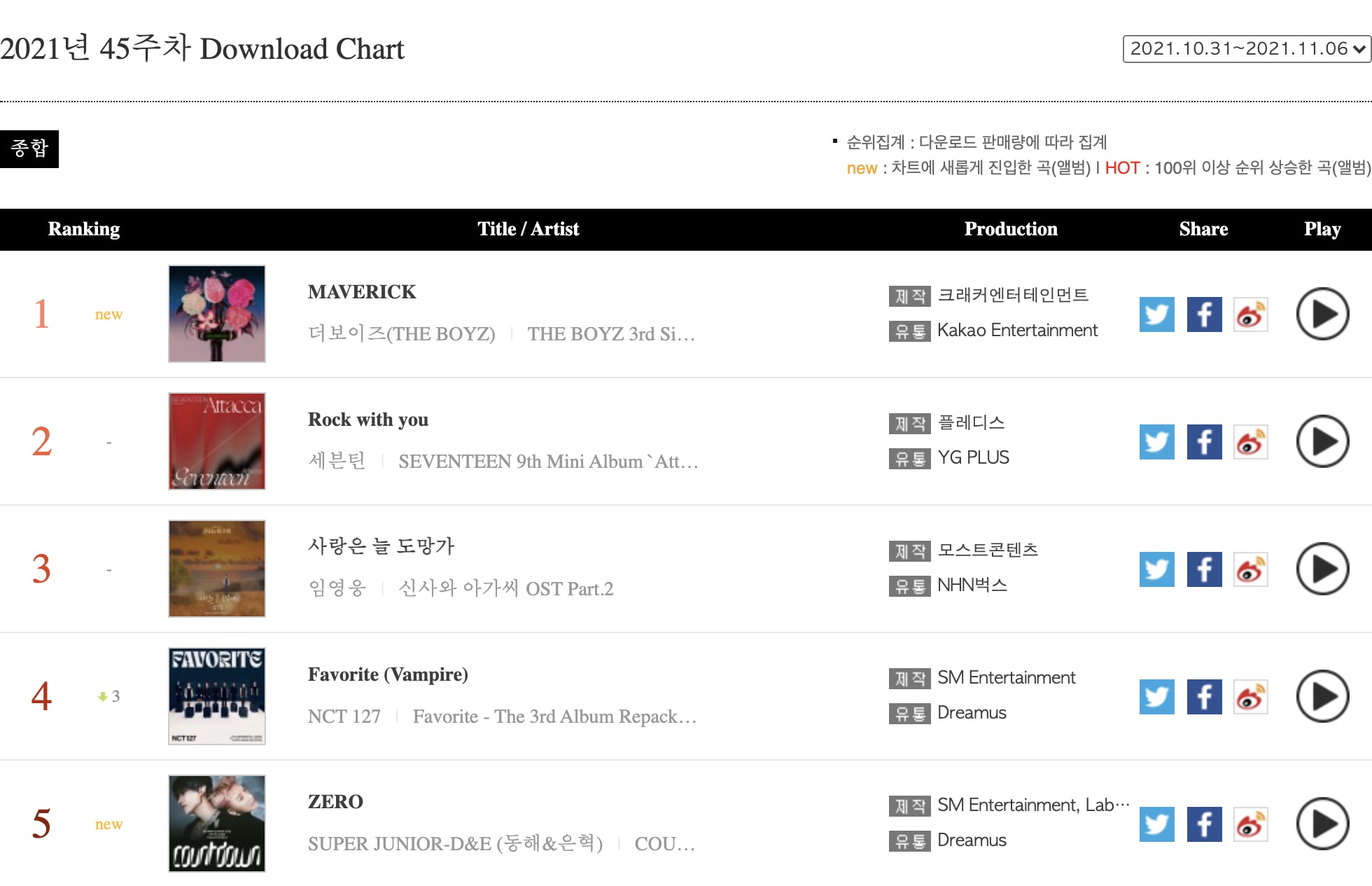 THE BOYZ also topped the weekly album chart with “MAVERICK.” NCT 127’s “Favorite” took the next two spots with its regular album and kit version. The “COUNTDOWN” and “be” versions of Super Junior D&E’s “COUNTDOWN” ranked No. 4 and No. 5, respectively. 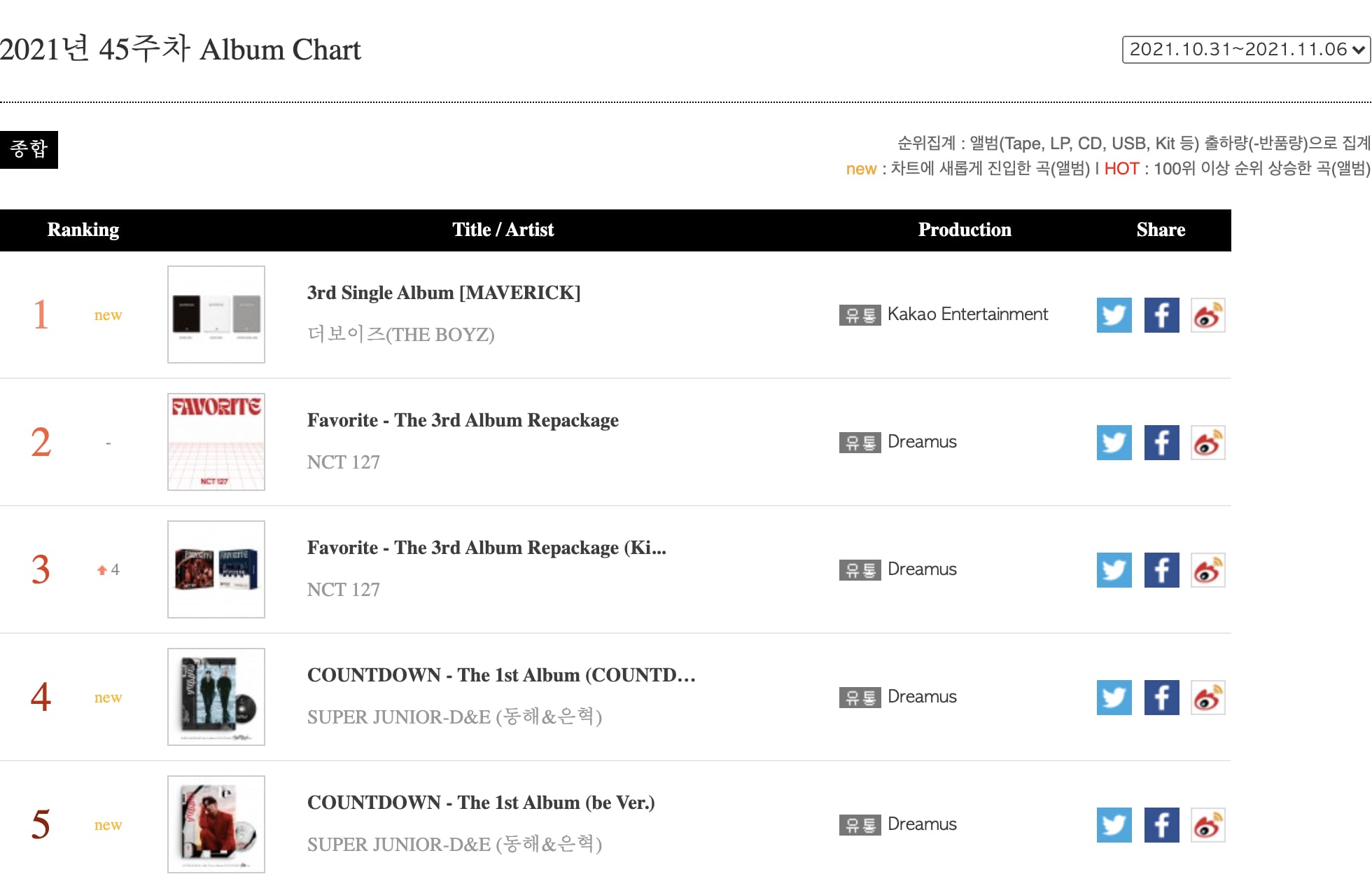 BTS remained on top of Gaon’s Social Chart 2.0 for October. Lisa rose three spots to No. 2, and BLACKPINK dropped one spot to No. 3. Lim Young Woong maintained his spot at No. 4, and aespa rose 13 spots to No. 5. 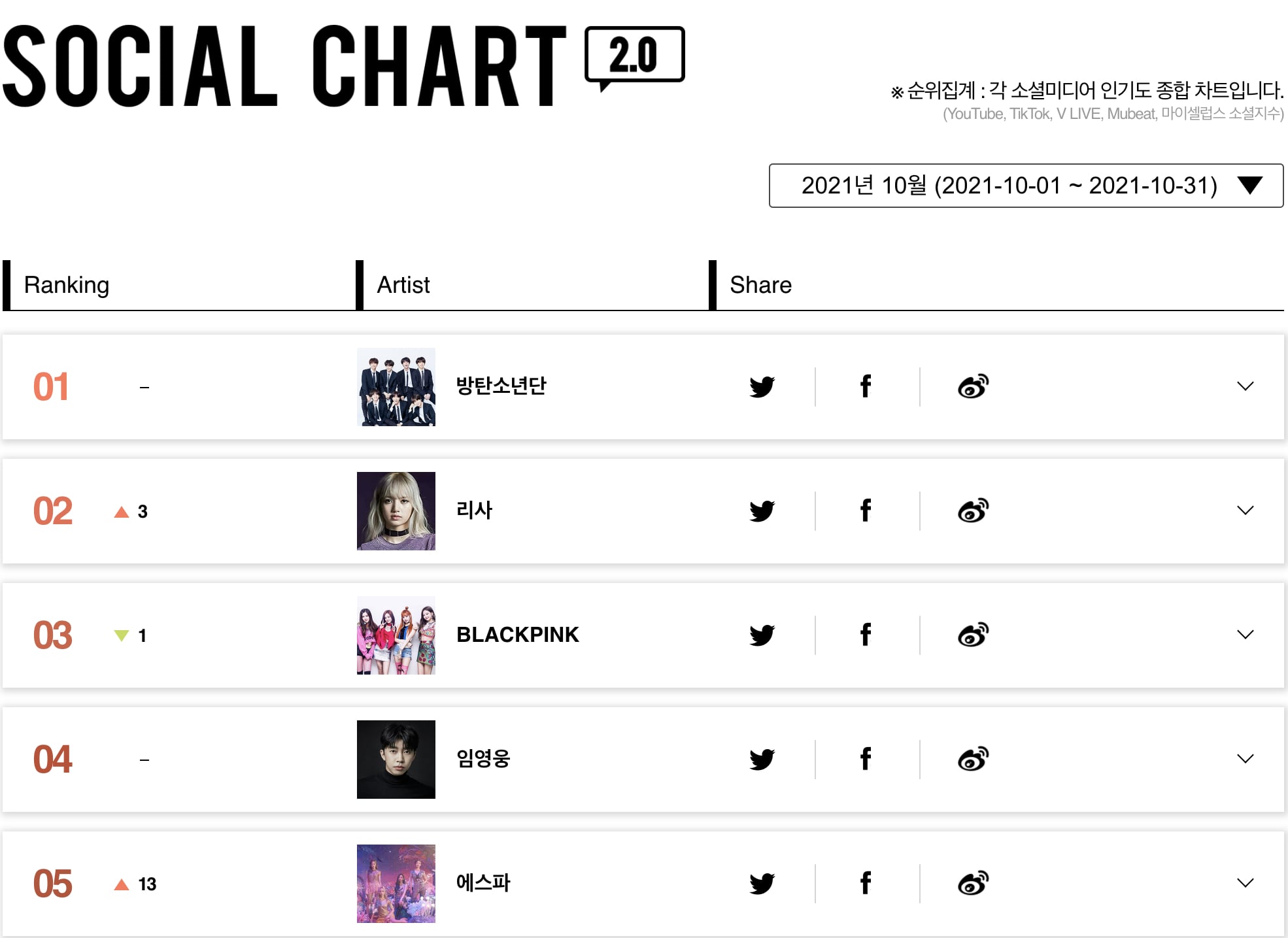 The top five on the weekly social chart are the same as last week with BTS, Lisa, BLACKPINK, Lim Young Woong, and Kim Ho Joong taking the top spots. 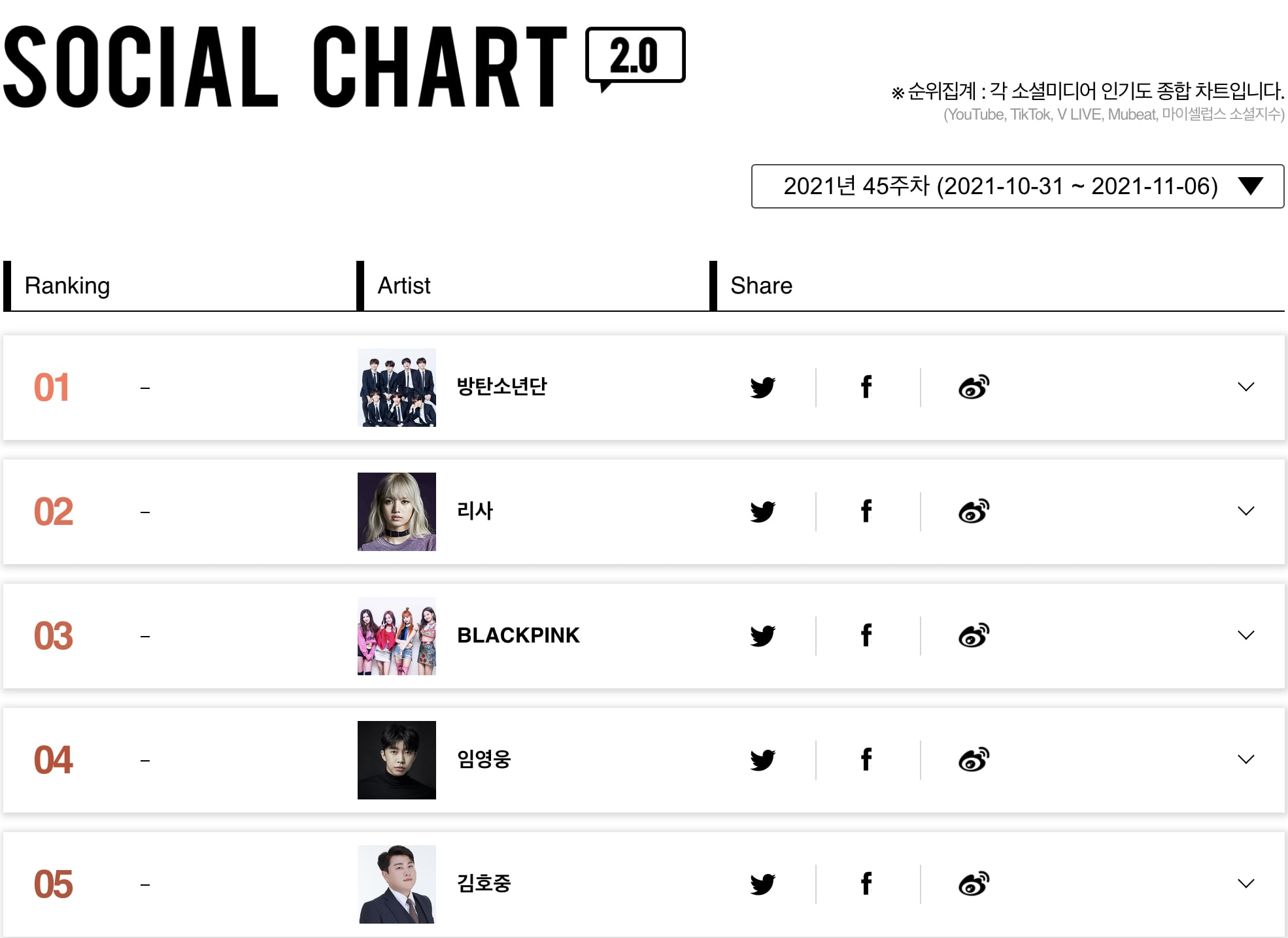