“Our Beloved Summer” has given a closer look at Noh Jung Ui and Kim Sung Cheol!

SBS’s new Monday-Tuesday drama “Our Beloved Summer” is a romantic comedy starring Choi Woo Shik and Kim Da Mi as a complicated couple that broke up on a bad note. But when the documentary they filmed 10 years ago in high school suddenly becomes popular, they’re forced to be in front of the camera together once more.

Noh Jung Ui plays top idol NJ, who has never once missed out on the top spot with her incredible good looks and talent. However, once she feels herself slowly falling out of the orbit of success, she begins to prepare to live her real life. She starts to feel comforted through the documentary film by Choi Woong (Choi Woo Shik), whom she also begins to have feelings for.

The first still features NJ as an experienced idol in her ninth year of promotions, hanging out in a music show waiting room. While she looks at ease with her surroundings, she simultaneously appears empty inside. 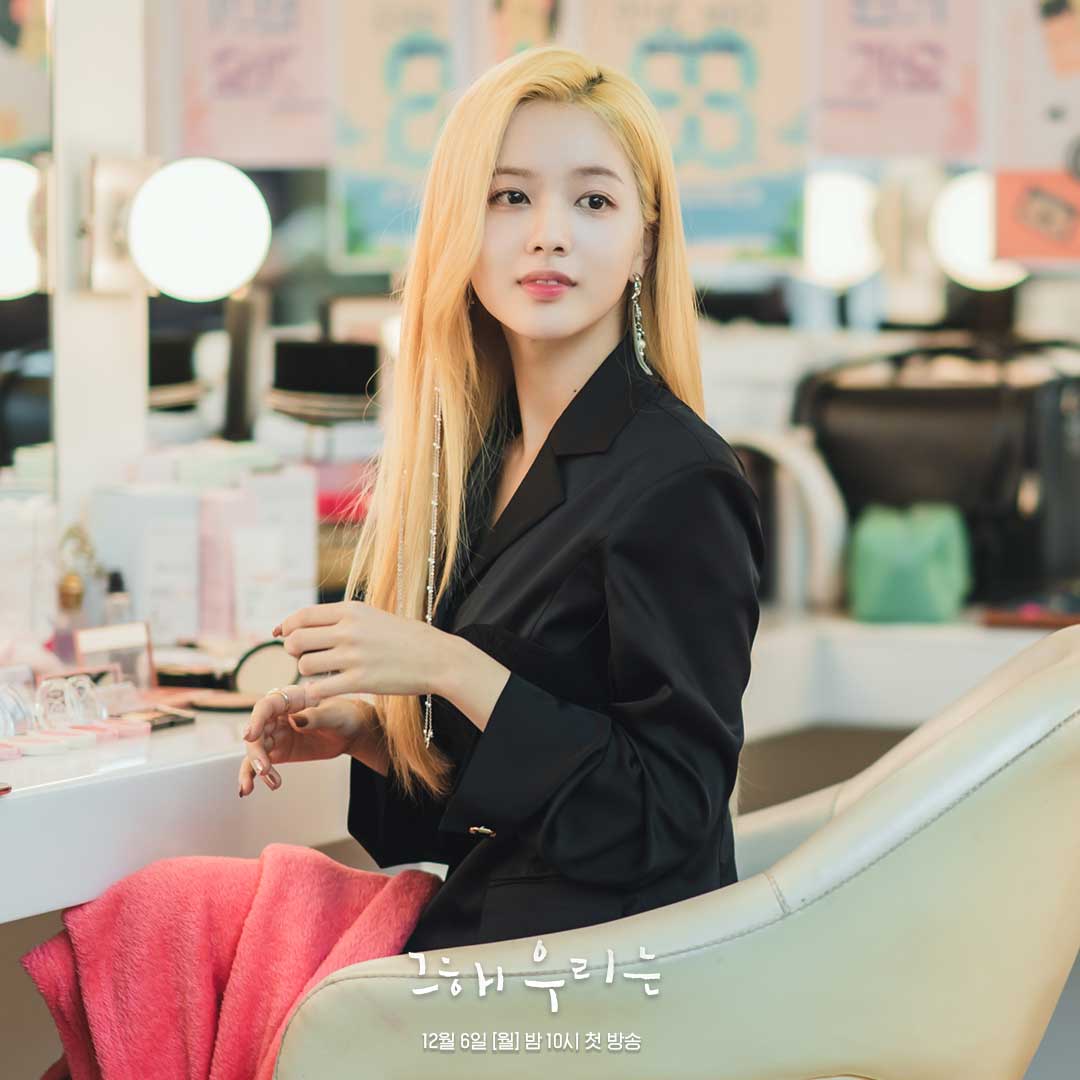 Within her draining lifestyle, she starts to change after meeting Choi Woong. She makes sure to have her phone at all times just in case he calls and is always prepared to run to his side. 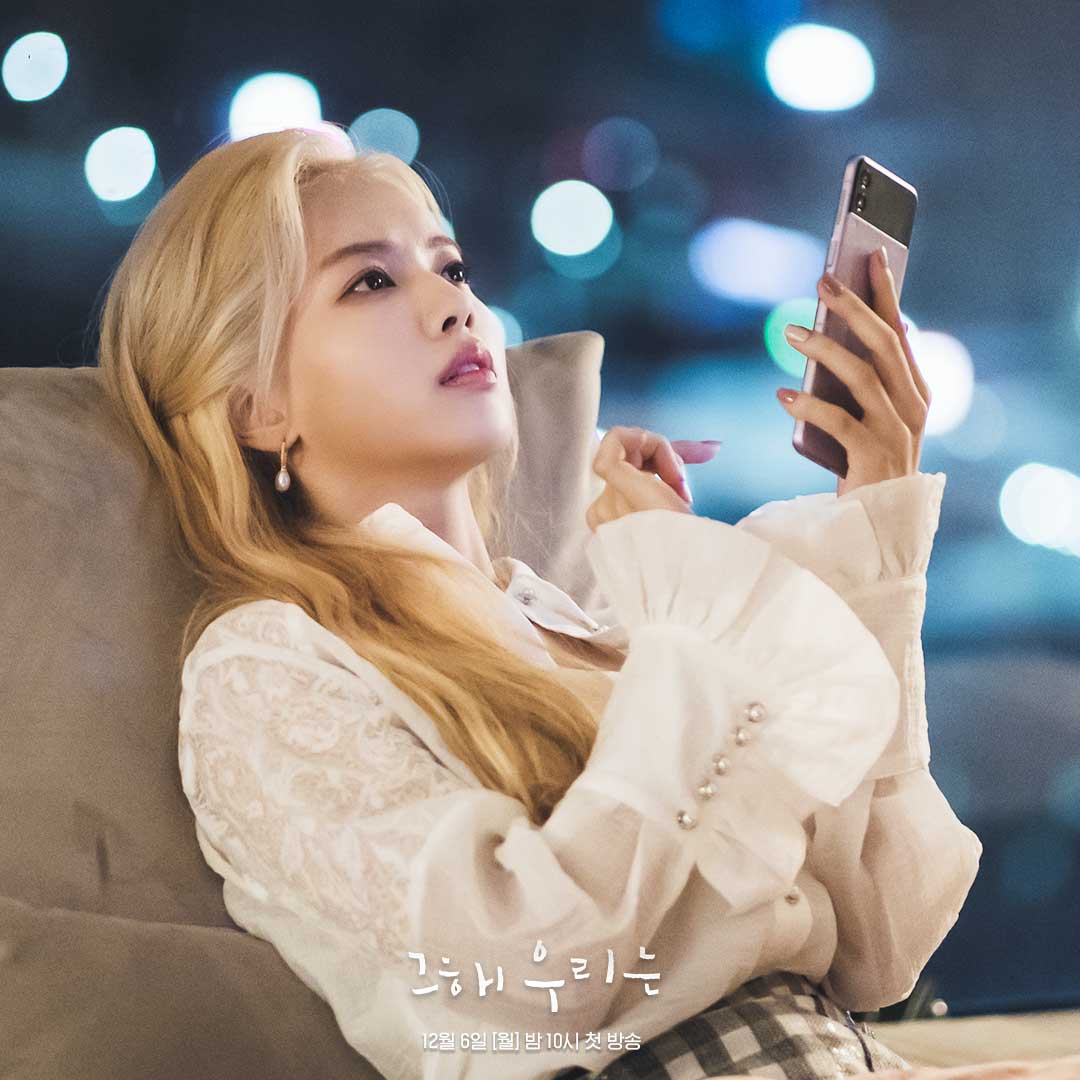 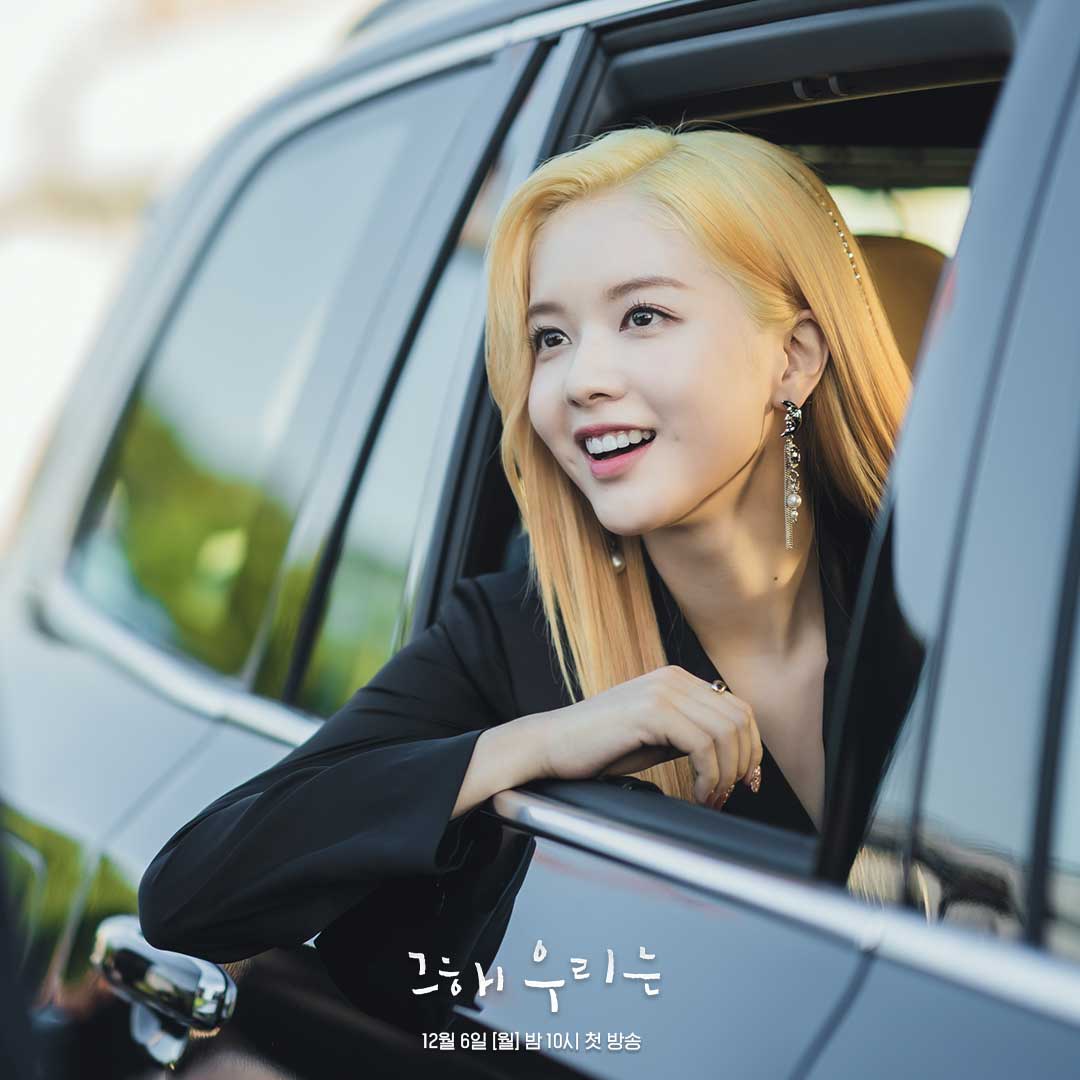 Regarding why she chose to star in this drama, Noh Jung Ui commented, “More than anything, my desire to act with the actors I like was the biggest factor. I haven’t been in a project since becoming an adult but since NJ is such a charming character that fits my age, there was no reason to hesitate.”

She elaborated on NJ, sharing, “She’s an incredibly daring character. Despite her young age, the pain she’s experienced from being in the workforce for such a long time coexists with her maturity. At the same time, she has a lovely and cute charm. I acted while paying a lot of attention to making her aloof, but still often having the boldness of a top idol.”

Kim Sung Cheol plays Kim Ji Woong, a documentary director and Choi Woong’s long-time best friend. As someone who’s been exceptionally lonely since a young age, Kim Ji Woong thinks his work watching life unfold from behind the camera is similar to his own life. He’s known Choi Woong and Gook Yeon Soo (Kim Da Mi) longer than anyone and experiences a transformation while filming their reunion documentary.

For the past 10 years, Kim Ji Woong has consistently been an observer. One of Kim Ji Woong’s stills show the character on his first day of high school. Confused and unfamiliar with his surroundings, he intently looks around, leaving viewers curious about what catches his attention. 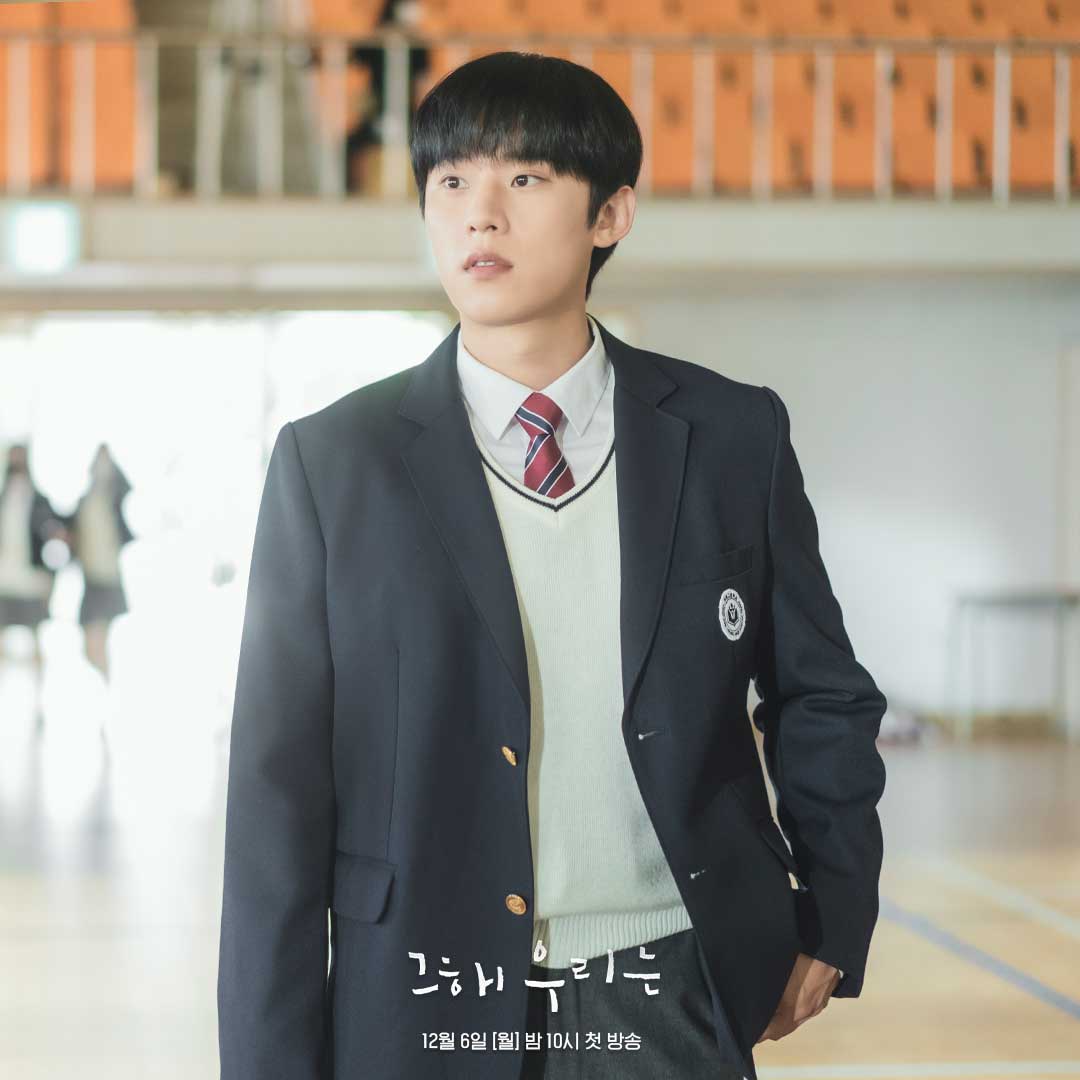 At 29 years old, Kim Ji Woong is now an experienced documentary director. After dreaming of this career while creating Choi Woong and Gook Yeon Soo’s documentary in high school, he’s now in charge of the pair’s second documentary. While observing the two main characters, he ends up reflecting back on his own story. 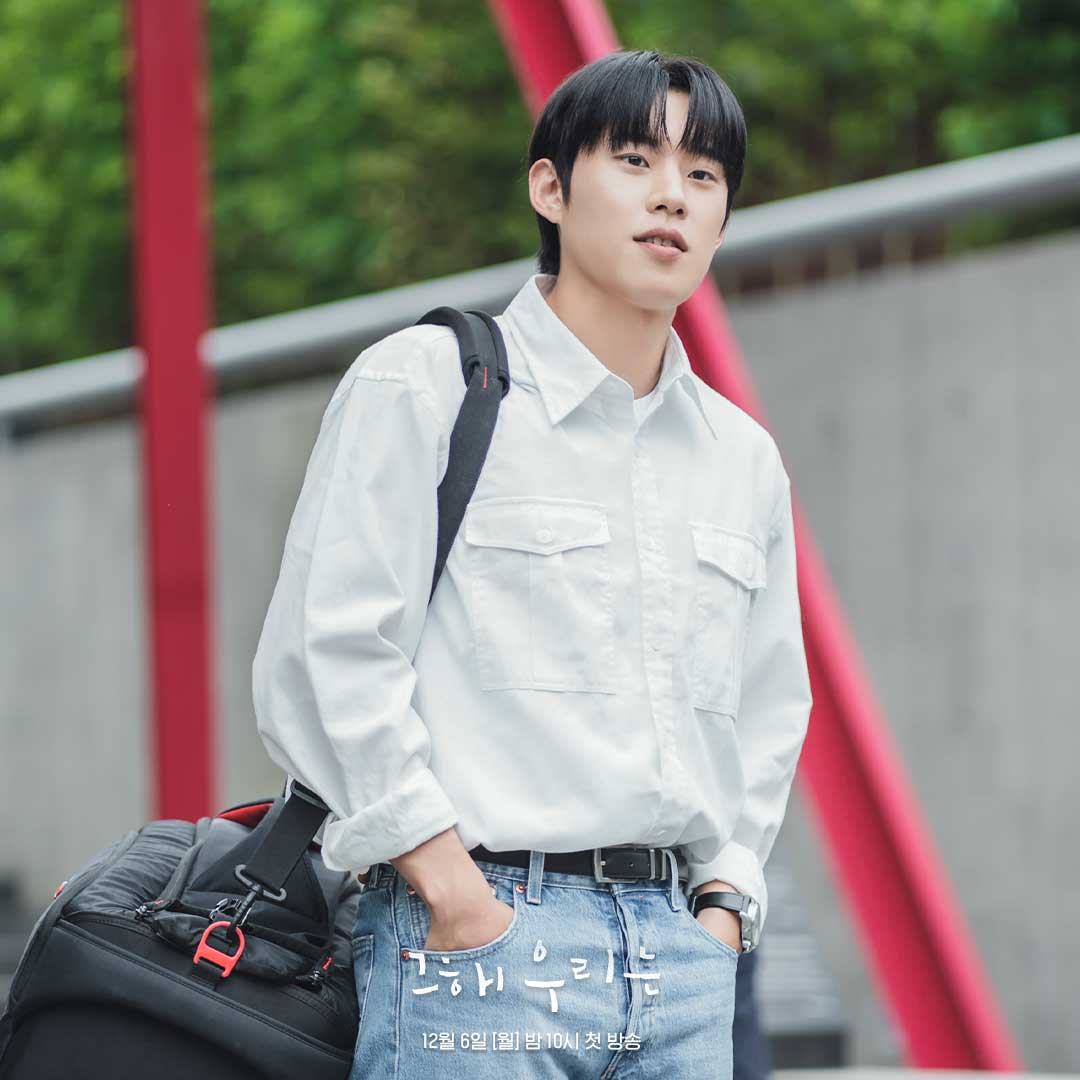 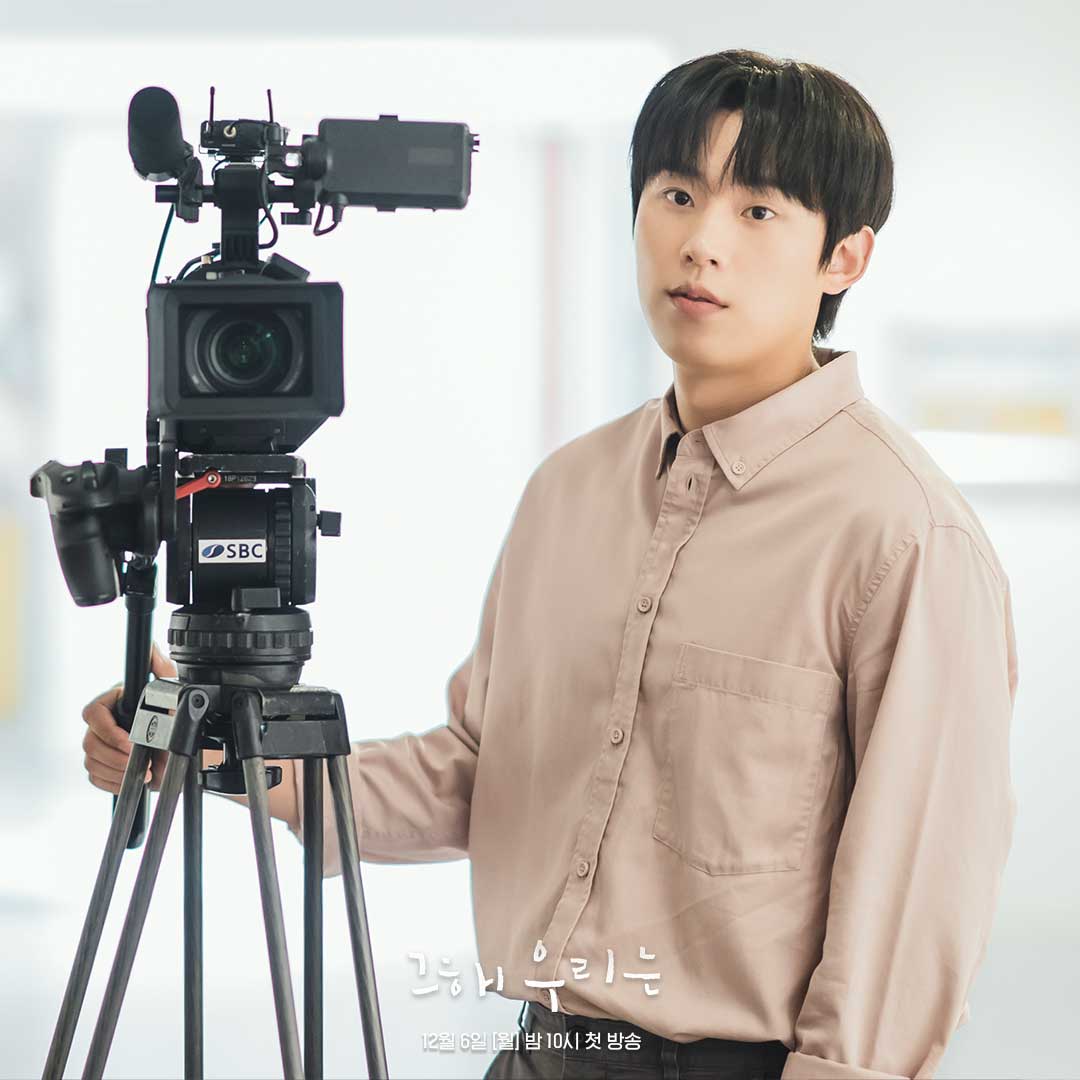 Kim Sung Cheol commented, “When I first saw the script, it was fresh, cute, and lovely. I also wanted to work with these actors as their fan. I think I’ll be able to spend 2021 enjoyably with the director, writer, and all our team members.”

He continued, “Ji Woong doesn’t reveal his inner self much. I’m acting in a way that will make viewers go, ‘I can’t tell what that person is thinking.’ I also requested interviews with real-life human, environment, and human affair documentary directors and learned a lot.”

“Our Beloved Summer” premieres on December 6 at 10 p.m. KST. Check out a teaser here!

Watch Noh Jung Ui in “The Phone” below!

Kim Sung Cheol
Noh Jung Ui
Our Beloved Summer
How does this article make you feel?