There is something about a K-drama set in high school that gives us so many feelings of nostalgia and longing. The innocence of the characters and passion in which they love are endearing and charming to say the least. Seeing the journey of the characters become adults and experience love for the first time will give anyone butterflies. With winter and the holidays right around the corner, what better way to spend the time than snuggling up to some sweet high school K-dramas?

Here are 11 of many to check out (in no particular order): 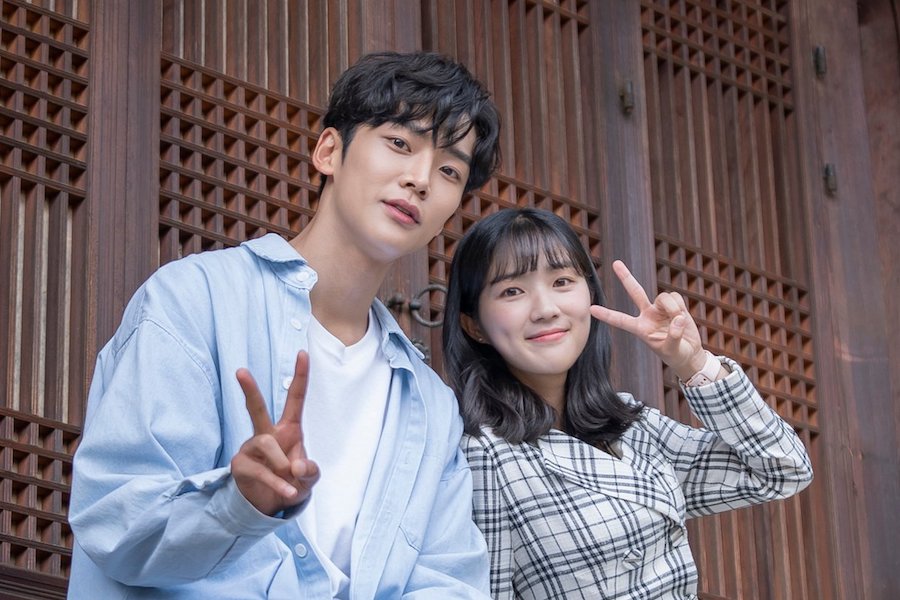 Eun Dan Oh (Kim Hye Yoon) thinks she’s a normal high school girl with a large group of friends. Everything seems to be going smoothly for her until she realizes that she’s living in a comic book and is nothing but a minor character. What makes this situation worse is that she ends up falling in love with Ha Roo (Rowoon), who is an extra in the comic book. Because he’s an extra, he’s barely in the comic book, which makes it difficult for Dan Oh to ever see him. The two agonize over how they should be with each other despite the odds being against them.

You will absolutely fall in love with the cast of this series. Kim Hye Yoon was coming off of the success she garnered from being in the hit drama “SKY Castle,” and it was a good change in pace for her. In this series, she plays a sweet and innocent girl who falls head-over-heels in love with the very unpopular Ha Roo, and seeing her work so hard to change the fate of their tragic destiny makes the series so exhilarating to watch. It also helps that there is lots of eye candy to go around for the entire series! 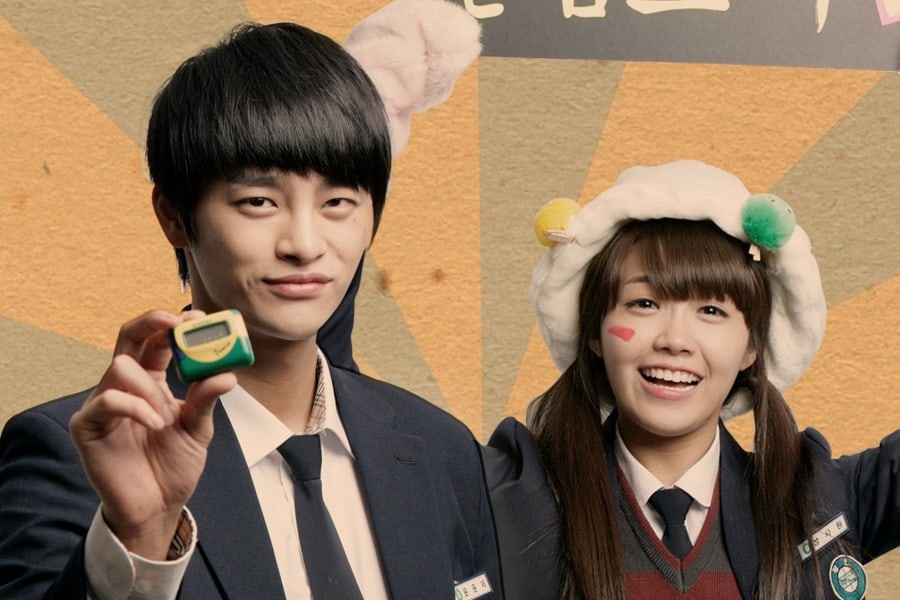 Seo In Guk stars as a high school student named Yoon Yoon Jae who has been in love with his childhood friend and neighbor Sung Shi Won (Jung Eun Ji) since they were kids. Despite the two having a sibling-like relationship, Yoon Jae’s feelings grow deeper as they get into high school, and he realizes that he wants nothing more than to be with her.

This is the first of the hit “Reply” series and one that is definitely a classic. The series deals with family, loss of loved ones, and romance, so it’s relatable for everyone. If you love a drama that has a bit of a retro vibe and revolves around some old school K-pop, this series does not disappoint! 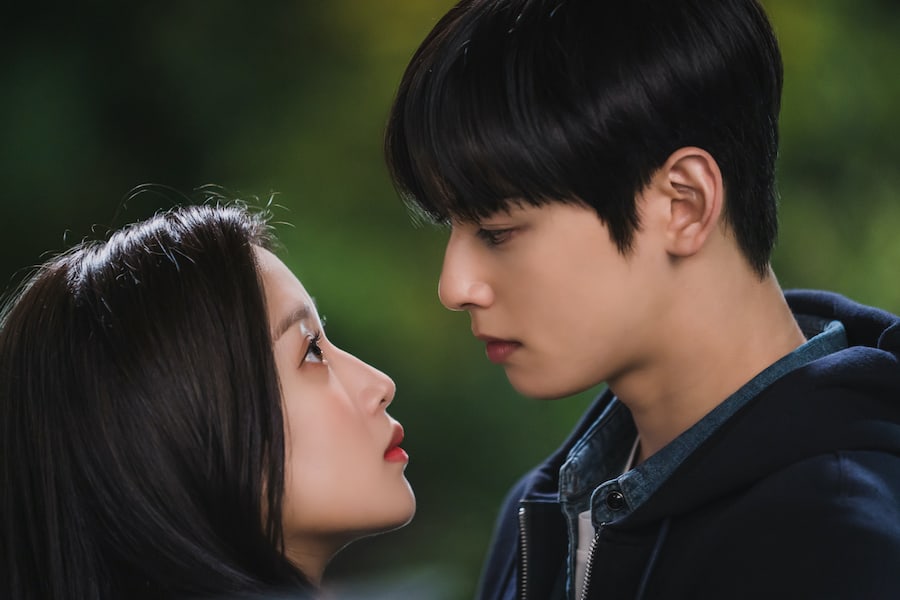 Lim Ju Gyeong (Moon Ga Young) is a high school student who has been bullied for not being the most attractive and popular girl in school, and she decides to take it upon herself to learn how to do makeup by watching videos online. She gets the opportunity to transfer to another school and gets caught in the middle of a heart-wrenching love triangle between Lee Su Ho (Cha Eun Woo) and Han Seo Jun (Hwang In Yeop). 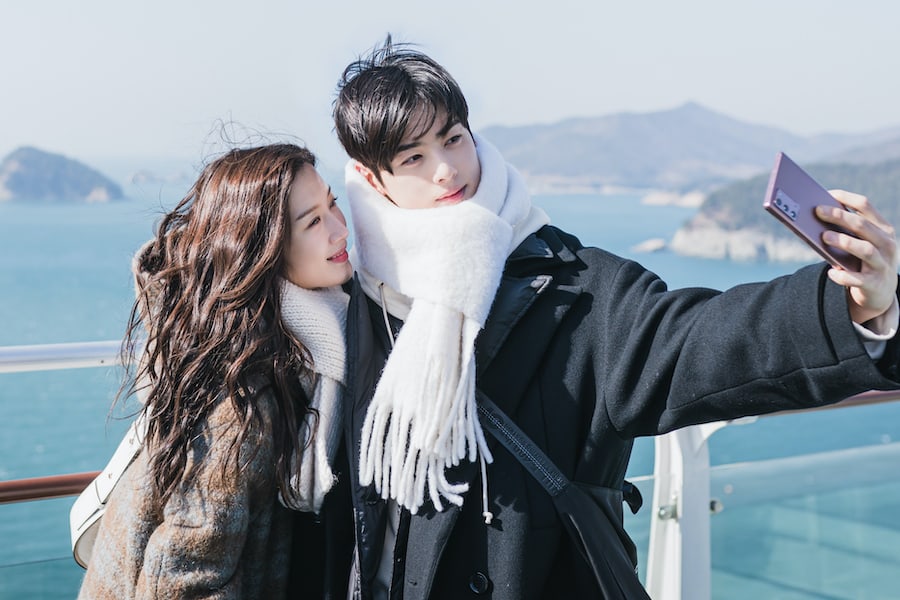 This drama gained a lot of popularity internationally as it was based on the already popular and successful webtoon written by Yaongyi. People were so eager to see how the drama would come into fruition and were pleasantly surprised by the depiction; not to mention, the cast looks identical to the webtoon characters. The series touches on so many realistic situations that Koreans face, and it is able to provide the perfect balance of seriousness and laughter. 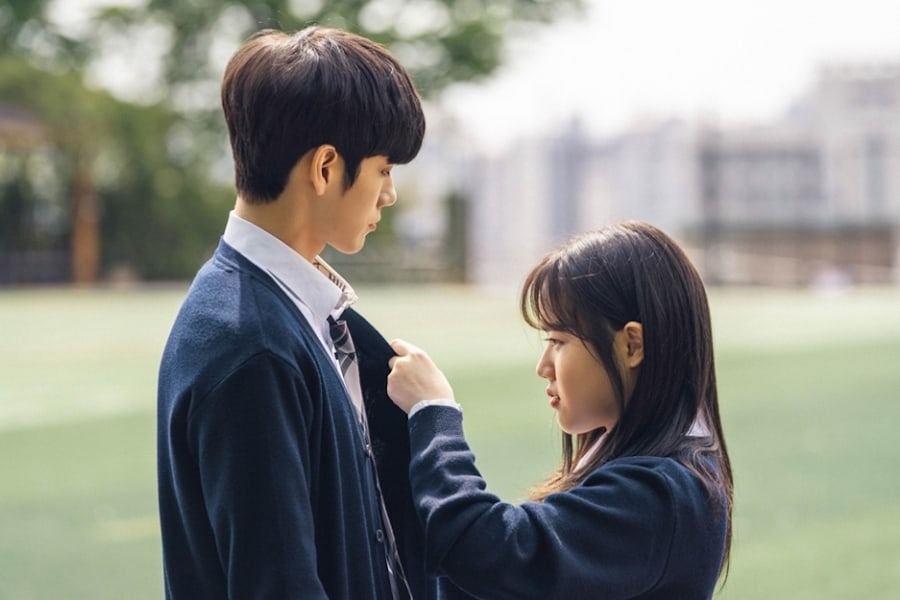 Choi Joon Woo (Ong Seong Wu) gets kicked out of school, which brings him to a new school where he meets Yoo Soo Bin (Kim Hyang Gi), who becomes intrigued by the new student with a mysterious past. Despite her instincts, she finds ways to spend time with Joon Woo and realizes that there is more to him than meets the eye. The two start to develop some strong feelings for each other.

There’s something about this series that is romantically sweet and nostalgic. The characters are all going through hardships of being a teenage and struggle to get through their issues. Despite the stress, they are able to find a friend or loved one that they can lean on for strength. This is also Ong Seong Wu’s first major K-drama role, and he does such a good job portraying the innocent and naive Joon Woo that if you weren’t a fan of him before, you will be after watching this series! 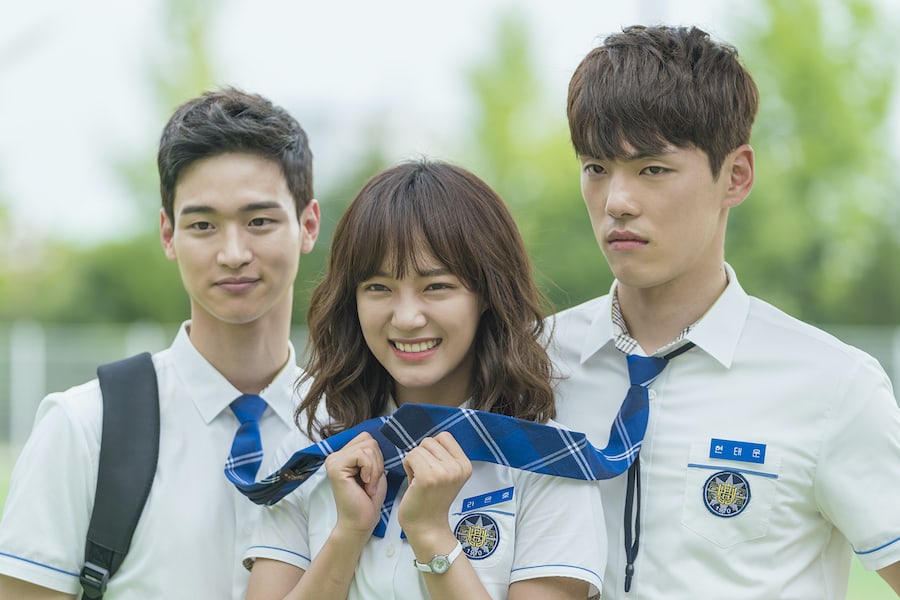 Kim Sejeong stars as Ra Eun Ho alongside Kim Jung Hyun who stars as Hyun Tae Woon (or should we say, Hyun Tae Swoon). It’s pretty much what you would expect out of a high school romance storyline. Tae Woon and Eun Ho start off as friends who like to poke fun at each other, but Tae Woon slowly starts to realize his feelings for Eun Ho and ends up confessing his love to her.

The best part about “School 2017” is the adorable chemistry between Kim Sejeong and Kim Jung Hyun. The two are totally natural as viewers are able to see the journey these two go on from being friends to first loves. Out of all the “School” series, this particular one is not too heavy, and you’ll appreciate the bubbly personality of Ra Eun Ho. She isn’t the brightest student, but she’s there for her friends and has the warmest of hearts. She really lights up the screen! 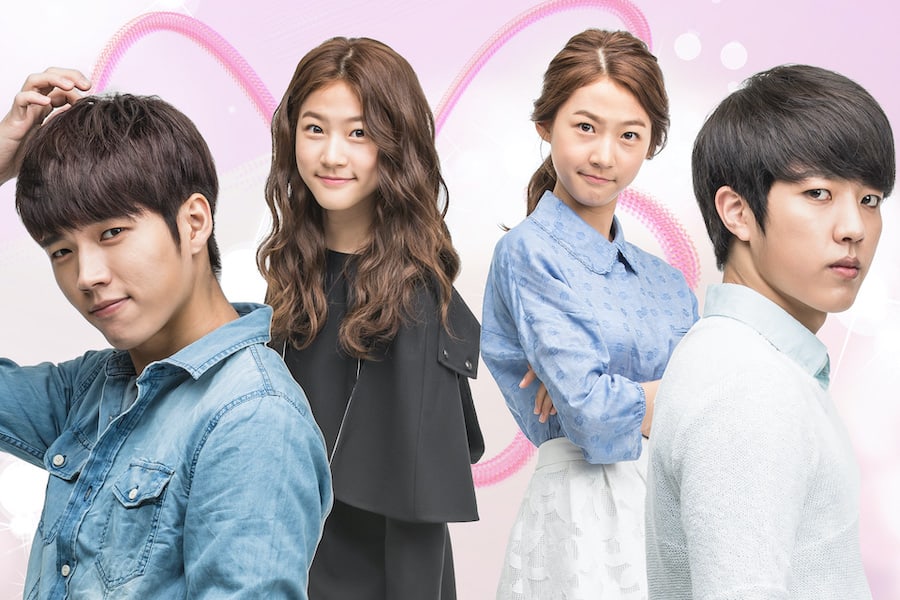 Kim Sae Ron plays Lee Seul Bi, an angel from heaven who helps protect people. After a car accident, she wakes up to realize that Woo Hyun (Nam Woo Hyun) can see her and that she has turned into a human. She moves in with Woo Hyun and ends up going to school with him, where she learns first-hand about the pangs of being human.

If you’re looking for a bit of a fantasy element to your high school drama, “Hi! School – Love On” is the perfect watch. Kim Sae Ron as the angel Lee Seul Bi is so endearingly innocent and adorable that you’ll totally get sucked into her story. It’s also got the added element of a love triangle, which a high school K-drama can never be without. 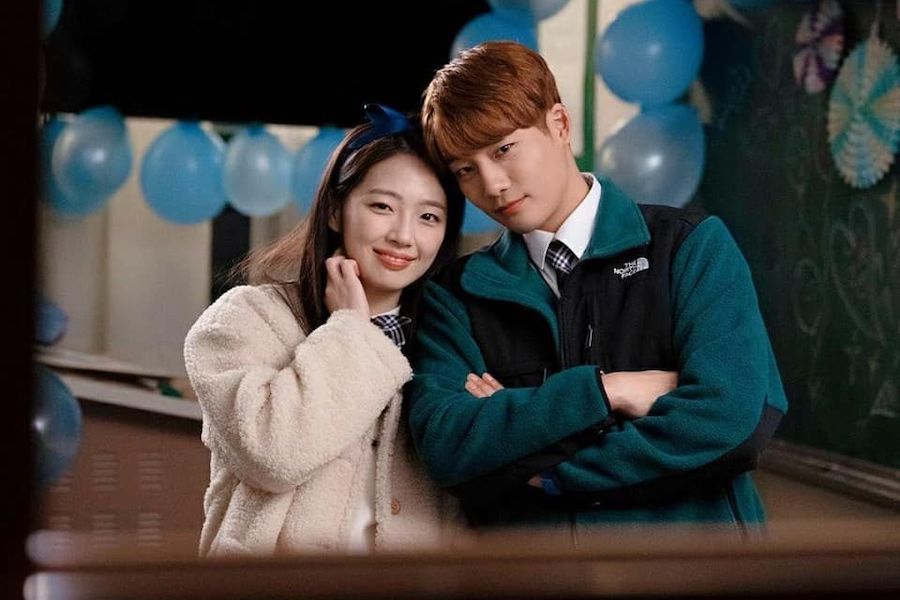 “Best Mistake” is a web drama starring Kang Yul as Ji Hyun Ho and Lee Eun Jae as Kim Yeon Doo. The story starts with Yeon Doo accidentally posting a photo of Hyun Ho on her social media account to warn off a stalker. When Hyun Ho finds out, he confronts Eun Jae, and this marks the beginning of their love/hate relationship.

There’s a reason why there was so much buzz around Kang Yul after this web series was released, because his role as Ji Hyun Ho is total boyfriend goals. If you love the bad boy becoming a total romantic theme, then this series has got that all covered. Seeing Ji Hyun Ho wanting to study hard so that he could go to the same university as Yeon Doo is just about the sweetest thing ever. You’ll have to watch it to understand! 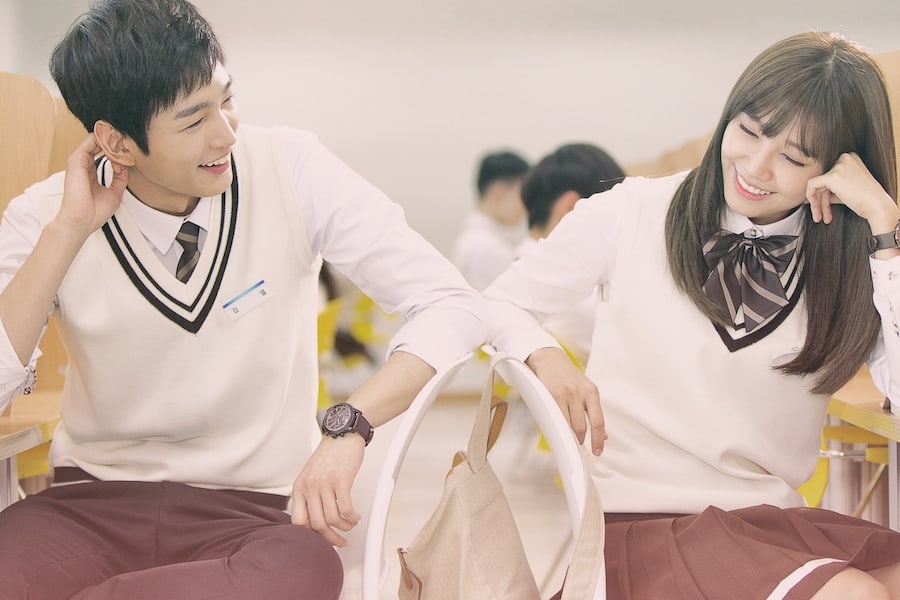 Jung Eun Ji plays Kang Yeon Doo, a passionate girl who is the head of the street dance club at her school, while Lee Won Geun plays Kim Yeol, the president of a club that has the school’s top students. The two clubs are forced to merge into a cheerleading group. The members find that they clash at first, but then they eventually learn more about each other, bringing them closer together and some even developing strong feelings for each other.

Seeing Jung Eun Ji in any role is truly a blessing. Her sass and attitude are so refreshing to see in a female lead, and you’ll often find yourself chuckling at various parts. One part that makes this series so good is the love triangle Kang Yeon Doo is caught in. Seeing the two boys pine after Yeon Doo is so romantic and sweet! It’s a light-hearted and cute series that will totally have you hooked. 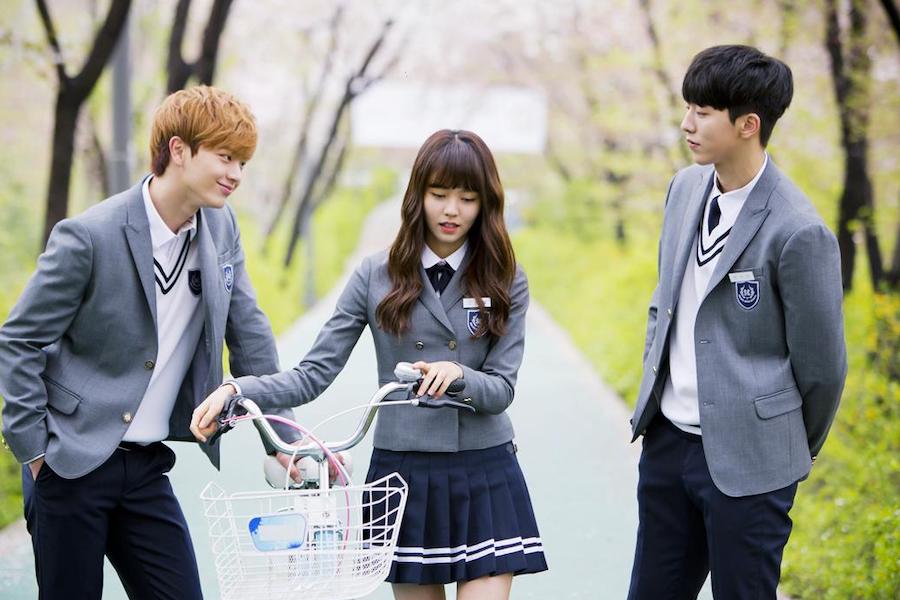 In this drama, Kim So Hyun plays both Lee Eun Bi and Lee Eun Byul, twin girls who are separated at a young age. When Eun Byul disappears one day, Eun Bi takes her place. Han Yi Ahn (Nam Joo Hyuk) likes Eun Byul and, without knowing it, also starts to like the new Eun Byul, who is really Eun Bi.

The angst and romance between these high school students will have your heart-strings tugging and aching. As the sixth installment in the “School” series, you’ll find yourself getting drawn into the love lives of these high school students and relating to a lot of the issues and obstacles they experience. In this particular one, you’ll especially love the charming and quirky Gong Tae Kwang (Yook Sungjae) as he won the hearts of so many! 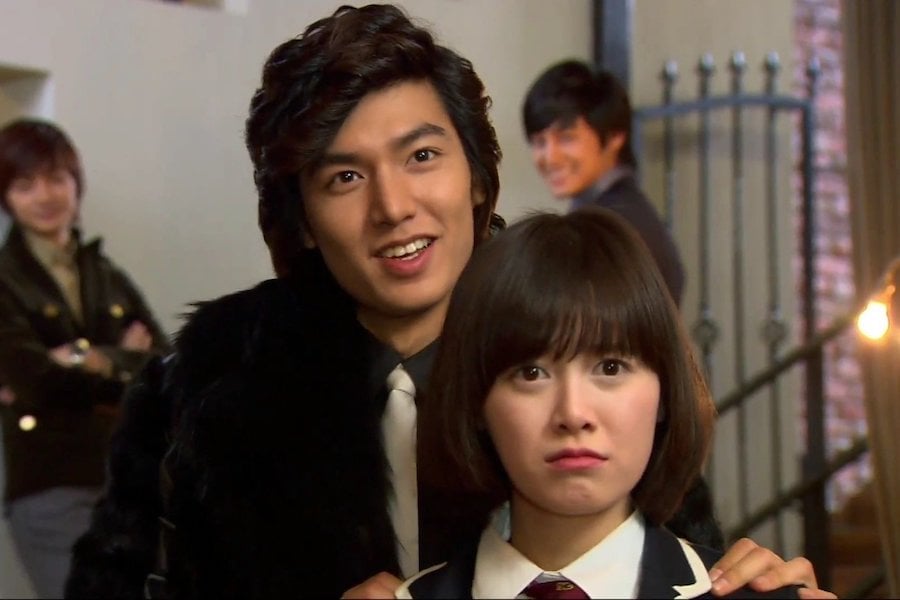 Goo Jun Pyo (Lee Min Ho) has got all the characteristics needed to be a chaebol. He’s good-looking, charming, popular, has a lot of friends, and is pretty arrogant, so it’s no wonder when Geum Jan Di (Ku Hye Sun) transfers to his school that he treats her horribly. He bullies her, which in turn makes his fellow classmates bully her too. It takes a destined event and transformation for Jun Pyo to realize that his hate for her may not actually be hate but genuine feelings of affection.

Seeing an ice-cold Goo Jun Pyo go from being very mean to the new girl to following her around like a love-sick puppy, “Boys Over Flowers” will have you intrigued. The series is a classic. It has brought in a large wave of K-drama viewers and deservedly so! There is an adorable main love story and an epic love triangle that the K-drama world continues to talk about to this day. You’re bound to get sucked into their whirlwind romance! 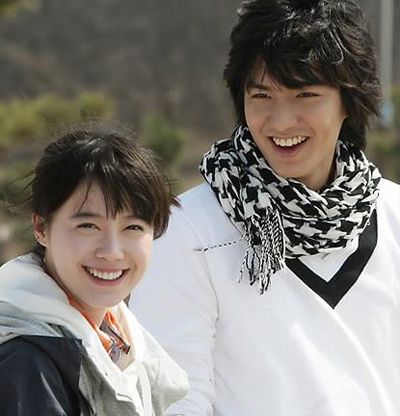 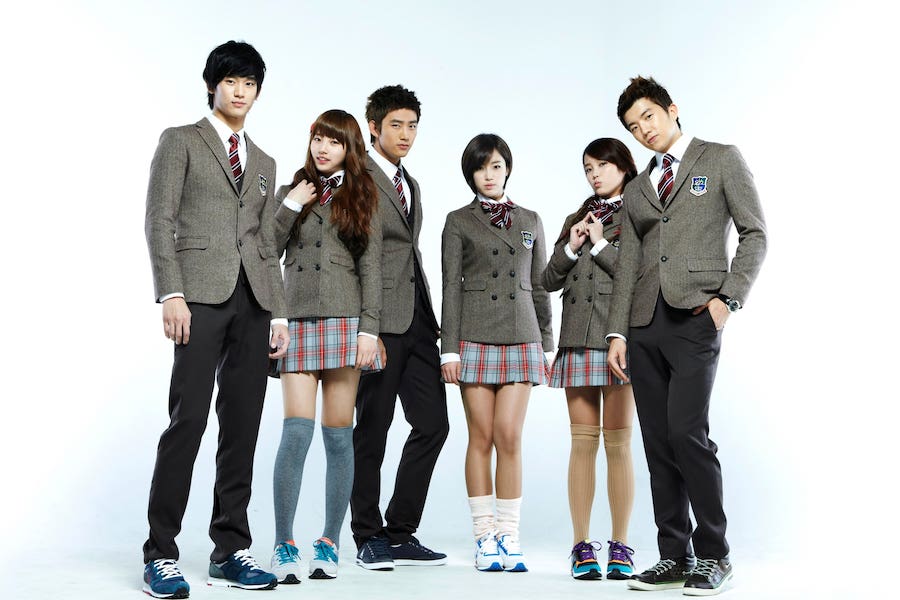 “Dream High” tells the story of several high school students who aspire to become K-pop idols. Go Hye Mi (Suzy) must convince two other students to come to her school in order for her to get accepted into the program. One of these students is Song Sam Dong, played by Kim Soo Hyun. He is a boy from the countryside who meets Hye Mi and falls in love with her, following her to Kirin Art High School.

Watching “Dream High” is like taking a walk down memory lane. You get to see a lot of well-established actors when they were first starting out in their careers. It’s a feel-good drama that has a lot of dancing and singing scenes that will lift your spirits. It’s rare that you get to see so many idols in one drama these days, which is why this particular series is extra special.

Check out “Dream High” starting with the first episode:

Hey Soompiers, what is your favorite cute and sweet high school K-drama? Let me know in the comments below!

Soompi Spotlight
Hi! School – Love On
Who Are You: School 2015
Boys Over Flowers
Dream High
Reply 1997
Cheer Up
School 2017
Moments of 18
Extraordinary You
Best Mistake
True Beauty
How does this article make you feel?