“A Year-End Medley” Previews Interesting Ties Between The Characters

Upcoming film “A Year-End Medley” has released a relationship chart of the characters!

The production team recently released a relationship chart centered around the members of the Hotel Emross team and the guests, as well as their relationships with the radio team and the high school students.

The chart points out the relationship between hotel manager So Jin (Han Ji Min) and her male friend Seung Hyo (Kim Young Kwang), whom she’s had a crush on for 15 years. On the other hand, Seung Hyo is engaged to Young Joo (Go Sung Hee), a pianist. So Jin also gives advice to plastic surgeon Jin Ho (Lee Jin Wook), who comes to Hotel Emross every Saturday to meet with prospective marriage partners.

The chart also raises anticipation for the romance story between the young and capable hotel CEO Yong Jin (Lee Dong Wook) and housekeeper Lee Young (Won Jin Ah), who dreams of being a musical actress. The relationship chart also points out the relationship between overseas businesswoman Catherine (Lee Hye Young), who has returned to Korea for her daughter’s wedding, and Sang Gyu (Jung Jin Young), who is Catherine’s first love and the hotel’s doorman. The romance between problematic hotel guest Jae Yong (Kang Ha Neul) and hotelier Soo Yeon (YoonA) is also highly anticipated. 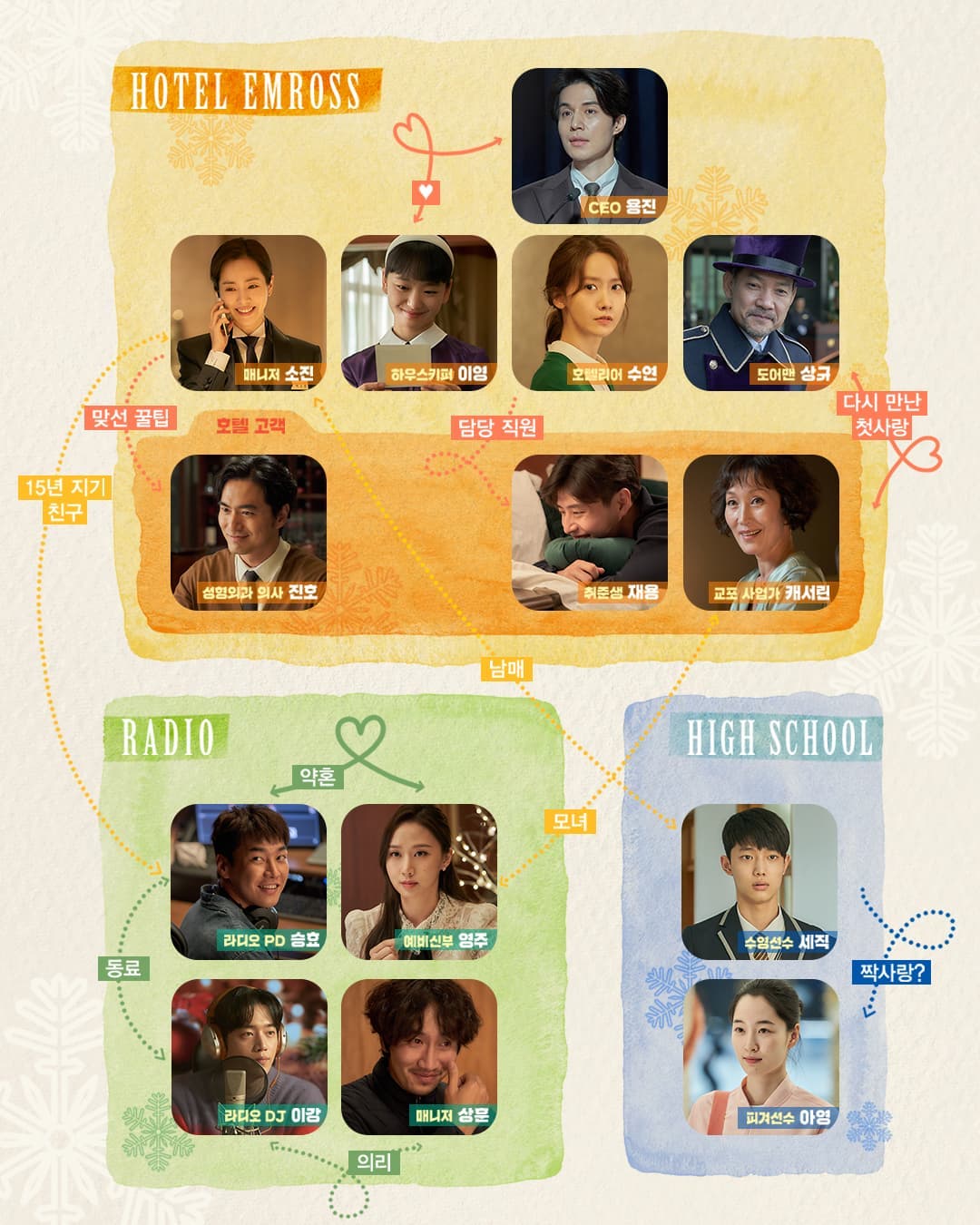 On the other hand, Sang Hoon (Lee Kwang Soo) is the manager of singer Lee Kang (Seo Kang Joon), an unknown artist who finally hits it big as a singer and popular DJ. Lee Kang is planning to hold a year-end concert at Hotel Emross as the contract with Sang Hoon is about to end.

Catherine is revealed to be Young Joo’s mother, raising questions about how the overall story will turn out within the hotel. Se Jik (Jo Joon Young) is a swimmer at his high school swim team. He is also the younger brother of So Jin. He is secretly in love with Ah Young (Won Ji An), a popular student, who is also a talented figure skater at the same school.

“A Year-End Medley” premieres on December 29 via theaters and TVING. Take a look at a teaser for the film here!