“Ghost Doctor” is a medical fantasy drama about a genius thoracic surgeon named Cha Young Min (Rain) and a silver-spoon resident Go Seung Tak, who could not be more different in backgrounds, skills, and personalities but end up combining bodies and spirits.

About taking on a drama in the “medical fantasy” genre,” director Boo Sung Cheol said, “As a director, you want to try different genres. This is a combination genre of the medical and fantasy genres. In order to bring the fantasy to life, getting the medical part right is important, so I worked hard to prepare.”

About casting Rain and Kim Bum, he said, “The two matched really well. If Rain is the engine, then Kim Bum is the headlights.” 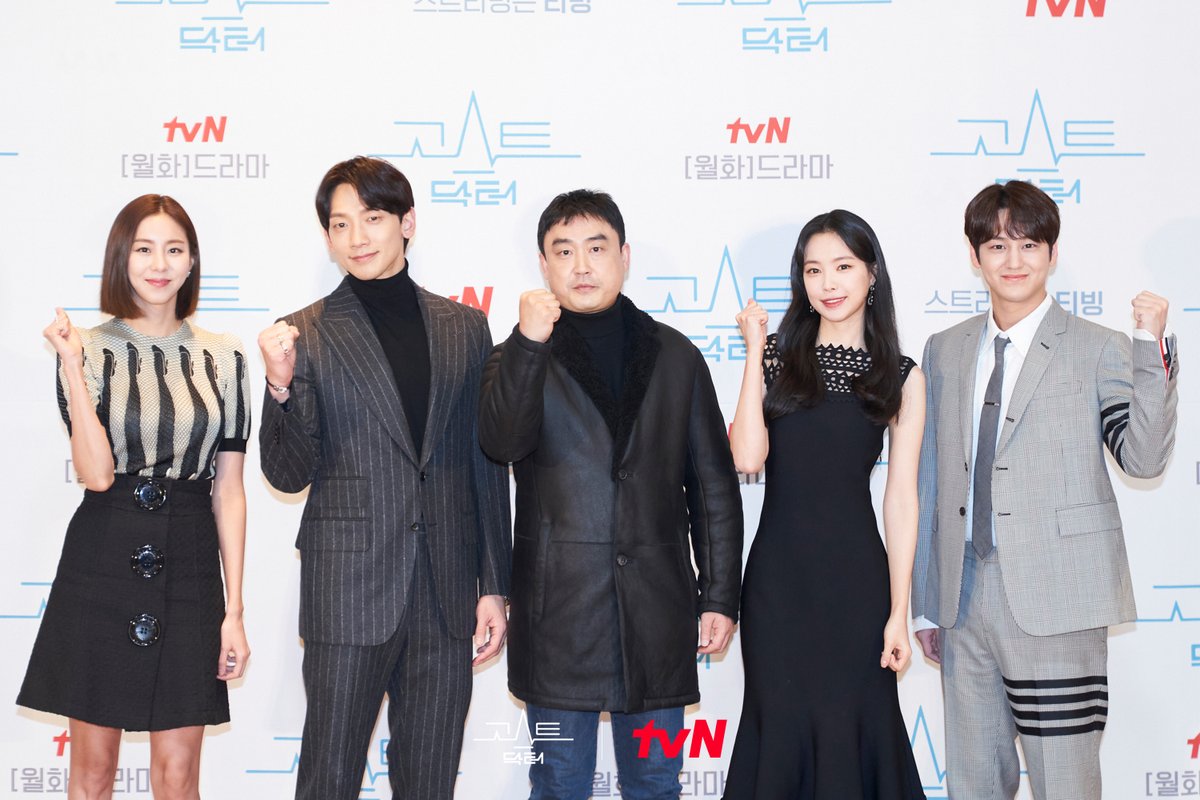 Rain said, “I think the drama will have the feeling of a respirator. I used to watch ‘General Hospital’ and stay up all night watching it. I want ‘Ghost Doctor’ to be a drama like that. I have a lot of respect for the director for creating such a vision. When I saw the teaser, even the sound had a fairy-tale quality. It’s a family-oriented drama, so everyone can enjoy it.”

Kim Bum said, “I had to act as if I had Rain’s character’s soul in my body, so I observed Rain for several months. When Seung Tak has Young Min’s soul in him, we called him ‘Seung Tak G.’ I tried to imitate his habits and act like what it would be if he were in my body. For example, there would be differences in our strides when we walked. Or I would put my hands in the pockets of my doctor’s coat, but he would put his hands in his pants pockets. We tried to make those differences stand out.”

As a result of the drama’s concept, the two lead actors had to memorize more than the usual amount of lines and movements. Kim Bum said, “When Rain is in my body, I had to do his lines, and he had to do my lines sometimes as well. We had to memorize all of each other’s lines. That was a new experience for me.”

Rain added, “We had to know each other’s actions and movements too in order to recreate them exactly. Since I couldn’t just focus on my own part, I had to have more concentration than usual.” 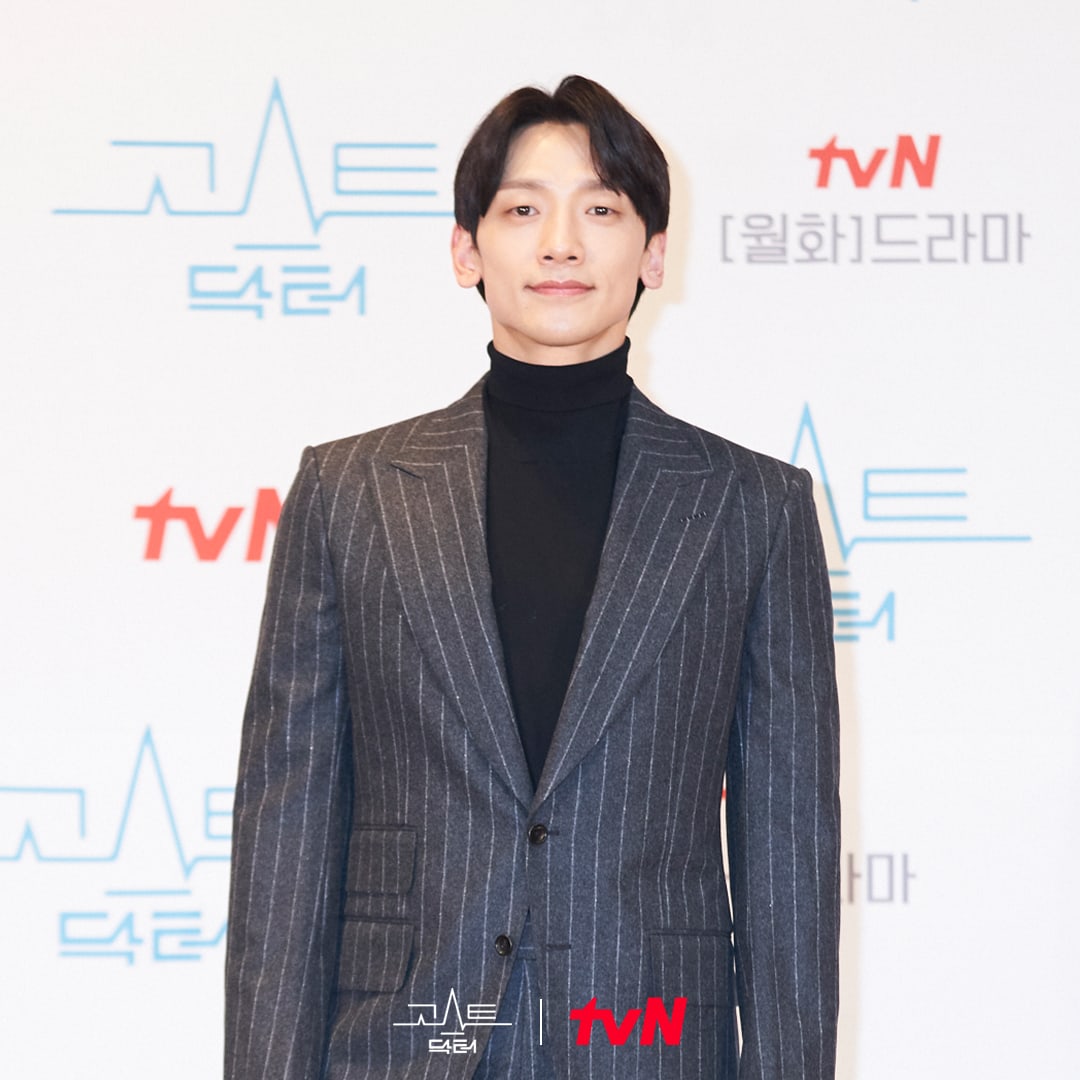 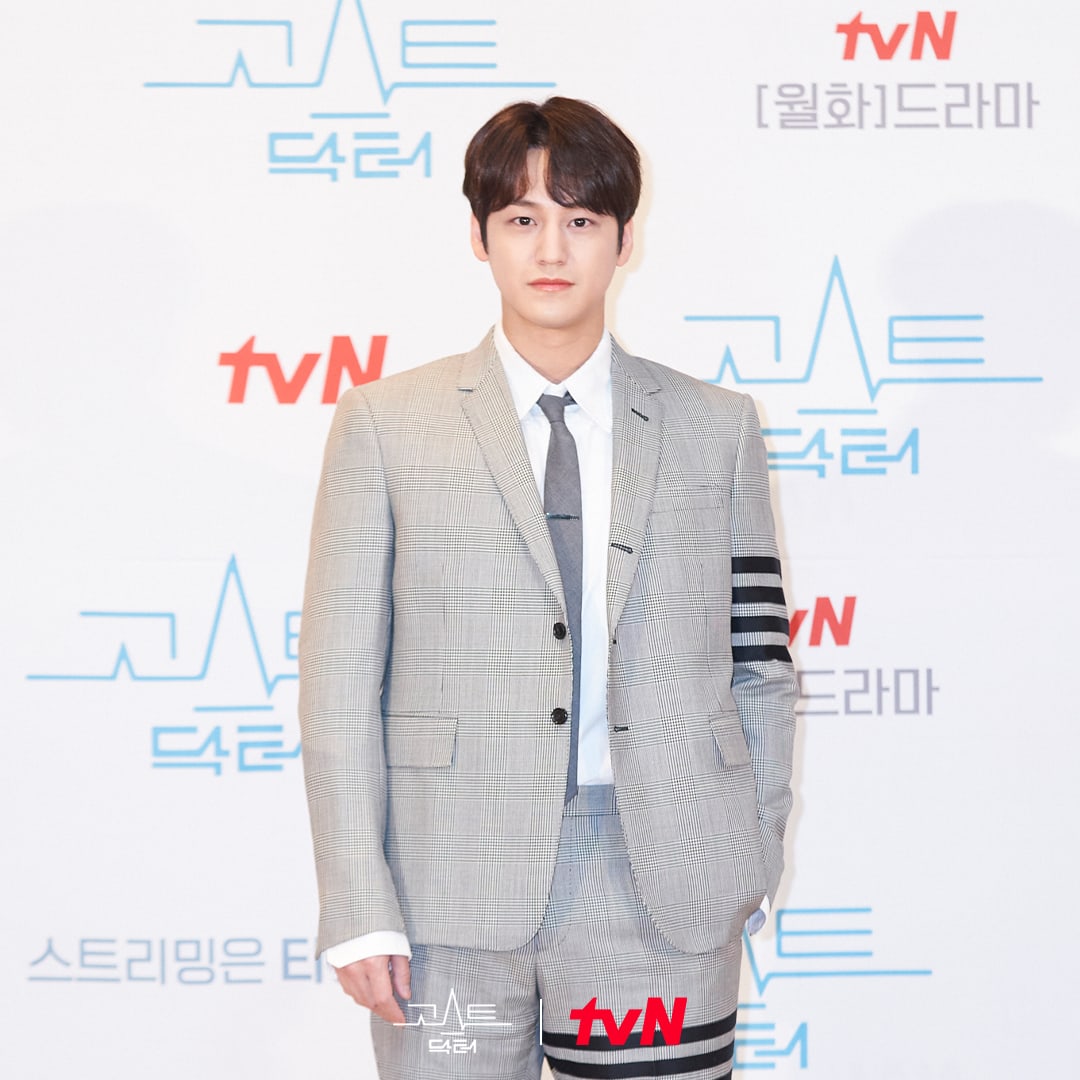 About why he chose the drama, Rain said, “I read a lot of scripts, but I remember thinking ‘Ghost Doctor’ would be really difficult to do. It felt like it would be a really hard path to take from start to finish. There were so many lines, and since it was fantasy, there would be CGI as well. There was also romance between the characters, and we’d also have to pull off the medical part well. But when I met the director and writer, I felt a sense of certainty.”

He shared how his immersion into his character, Cha Young Min, had gotten him in trouble with his wife Kim Tae Hee. “Cha Young Min is proud, selfish, and speaks brutally to others,” he said. “He’s the king of the hospital. When I made a mistake at home, I accidentally spoke like Cha Young Min does. Hm, it would be a problem if this became the headline. I think I’ll stop here.” 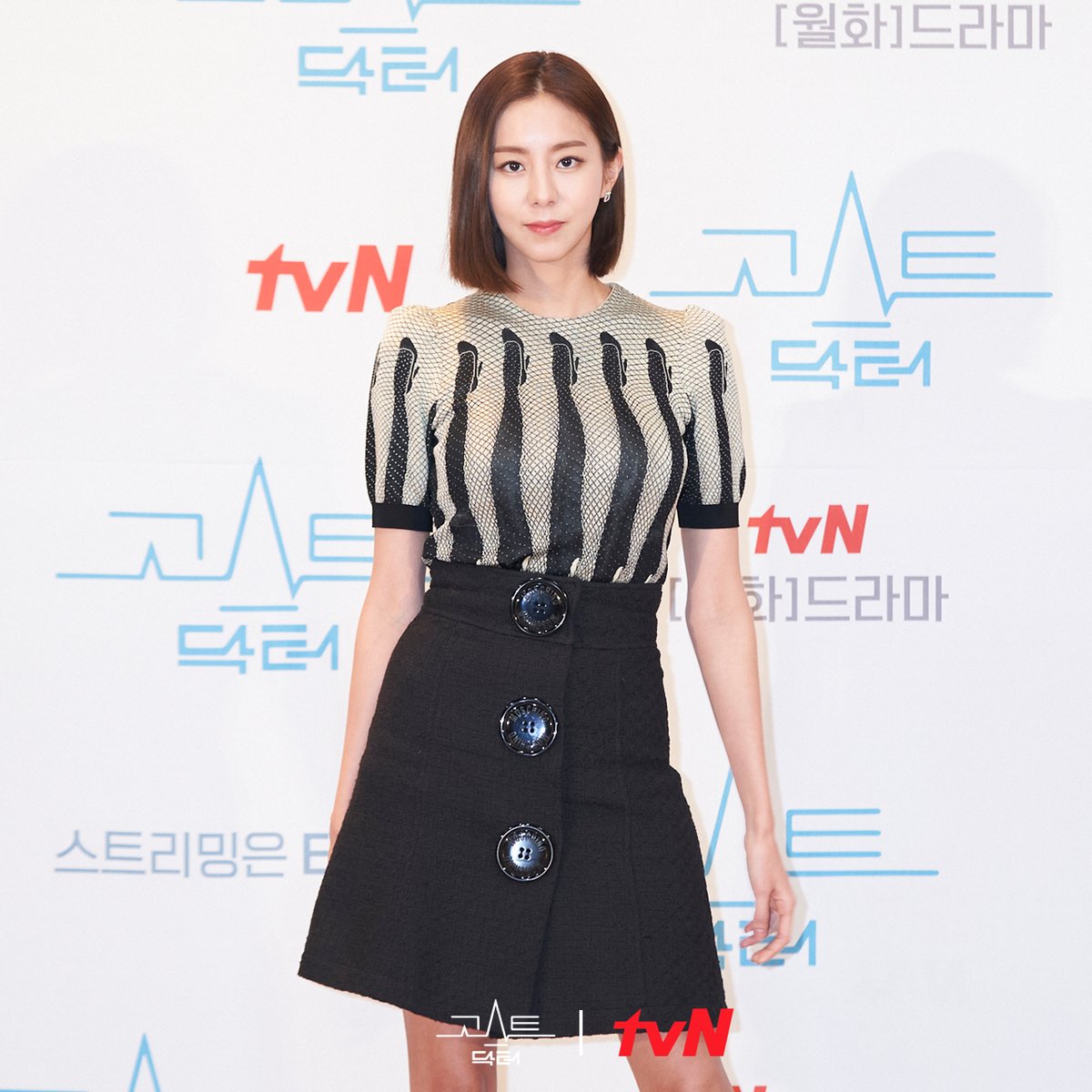 Uee said, “In order to play a character who seems cold on the outside but is warm on the inside, I cut my hair short and straight. I also studied medical terms in order to properly play a doctor, and watched a lot of videos. I’m excited and nervous to show the viewers a character that I’ve never played before.” She added that this was her first doctor role and said, “I joined because the script was so fun. I’ve never worked with Rain, Kim Bum, and Son Naeun before, so I thought this was a good opportunity. I also really wanted to play a doctor, since I’ve never done that before.” 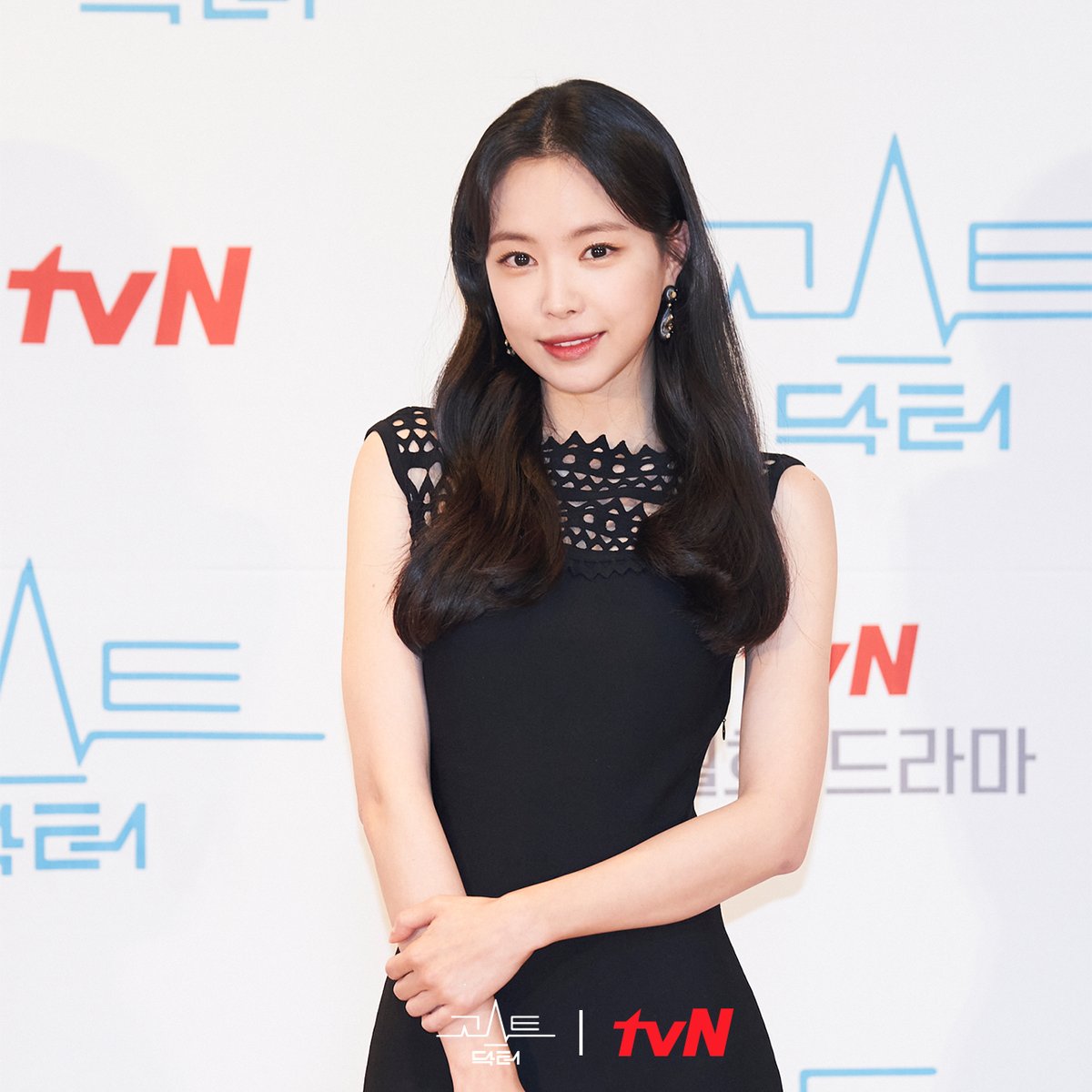 Rain praised his co-stars, saying, “I think Uee and Son Naeun really worked hard on the drama. When I heard them speak and intonate without making mistakes, I realized how much work they had put in. I realized that they must pour their blood and sweat into studying for their roles. I think that the past six months that we invested in the drama weren’t wasted. My chemistry with Kim Bum is beyond words. My first filming was with Son Naeun, and she was so good that I was taken aback. From our very first scene, I could feel that our chemistry was good. Uee was so perfect at memorizing lines that there was no room for ad-libs. Even the parts where she breathes are the same every time. I would rate everyone’s work 100 out of 100.”