Gaon has released its weekly chart rankings for the week of February 6 to February 12! 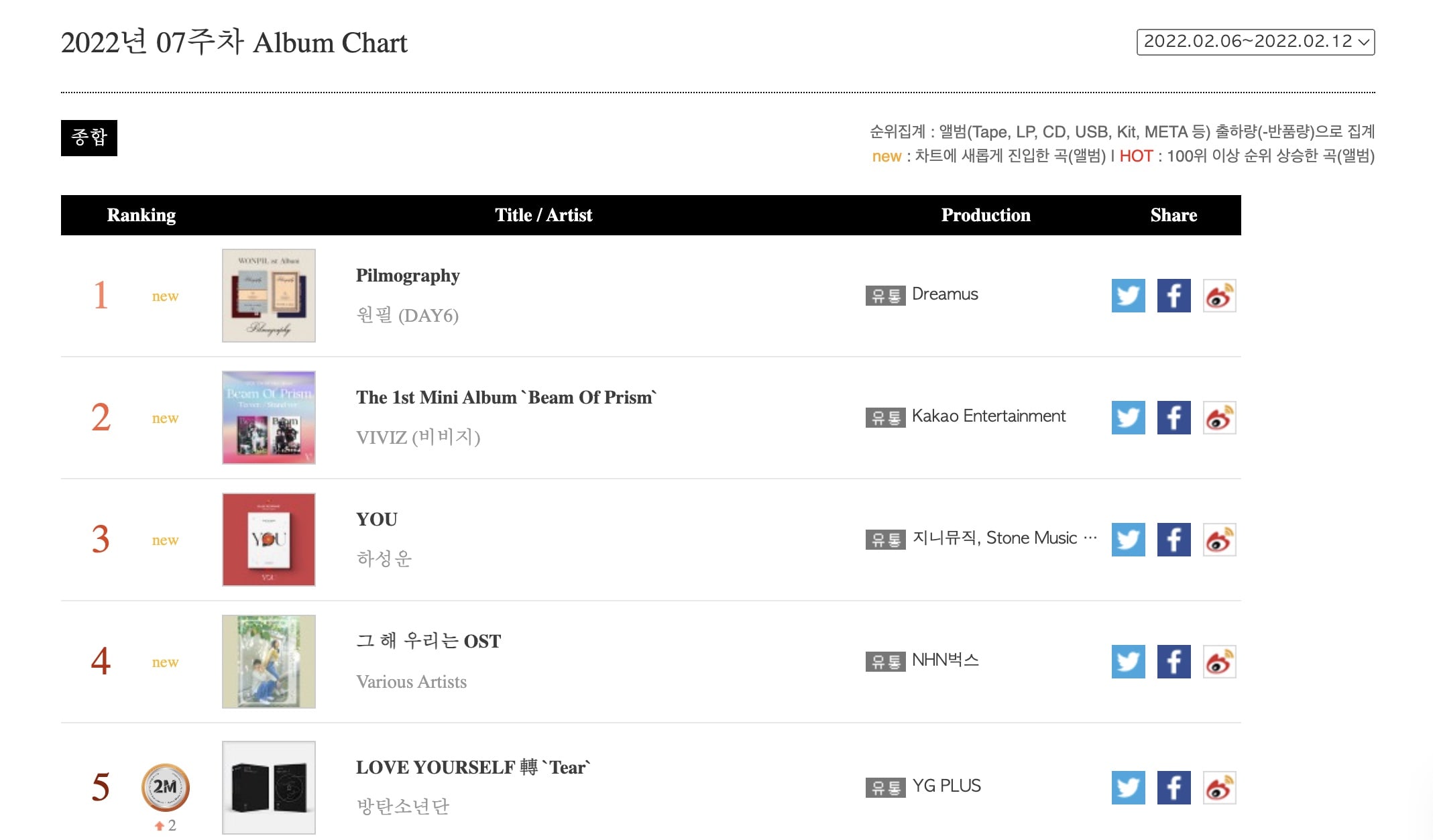 The top four on this week’s album chart are new entries, starting with DAY6’s Wonpil’s “Pilmography” taking the top spot. VIVIZ’s “Beam of Prism” followed at No. 2, and Ha Sung Woon’s “YOU” at No. 3. The OST for the hit SBS drama “Our Beloved Summer” took the No. 4 spot, and BTS’s 2018 album “Love Yourself: Tear” rose up the rankings to round out the top five. 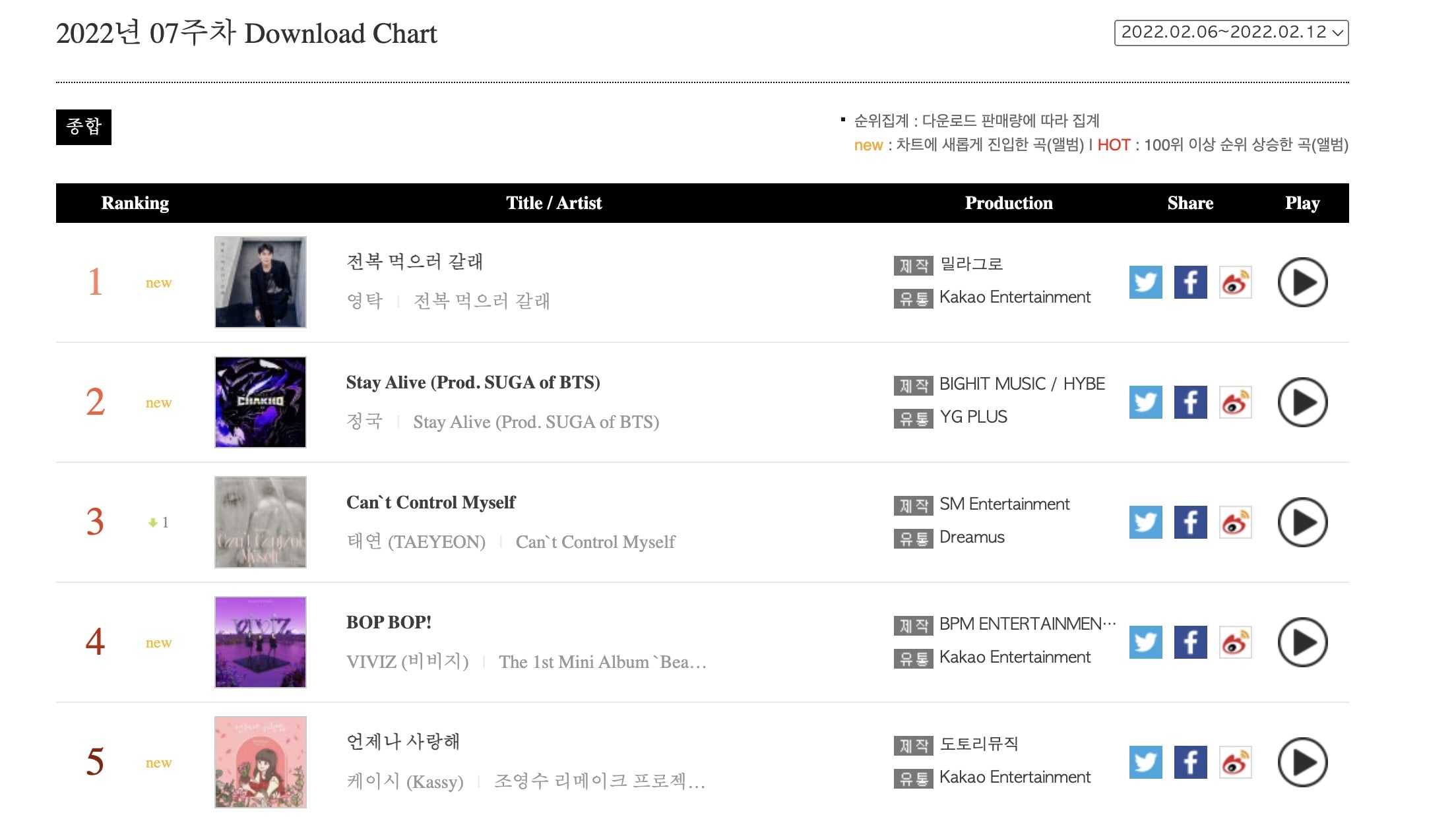 Like the album chart, the download chart for this week had new entries in four of the five places. Trot singer Young Tak’s new single, “Wanna go get some abalone,” topped the chart, followed by BTS’s Jungkook’s “Stay Alive,” an OST from the webtoon “7FATES: CHAKHO” produced by fellow BTS member Suga. Girls’ Generation’s Taeyeon’s “Can’t Control Myself” was the only holdover from last week, dropping to the No. 3 spot, while VIVIZ’s “BOP BOP!” and Kassy’s “Always love you” rounded out the top five. 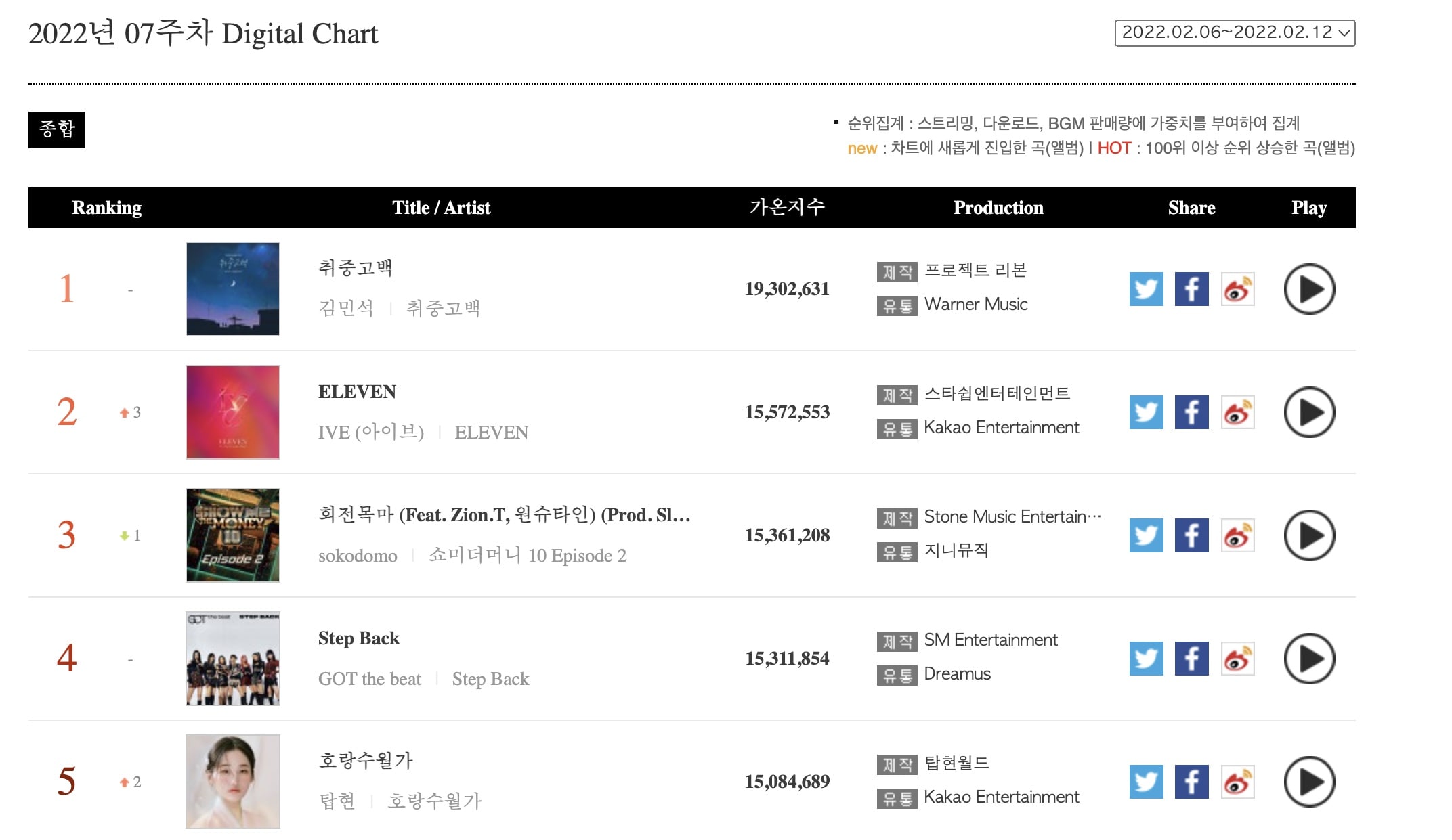 MeloMance’s Kim Min Seok’s “Drunken Confession” continued its domination on the charts by holding on to the No. 1 spot on the digital chart this week. IVE’s “ELEVEN” rose a few places to No. 2, while sokodomo’s “Merry-Go-Round” (featuring Zion.T and Wonstein and produced by Slom) dropped to No. 3. GOT the beat’s “Step Back” maintained its position from last week at No. 4, and Tophyun’s “Horang Suwolga” rose to No. 5. 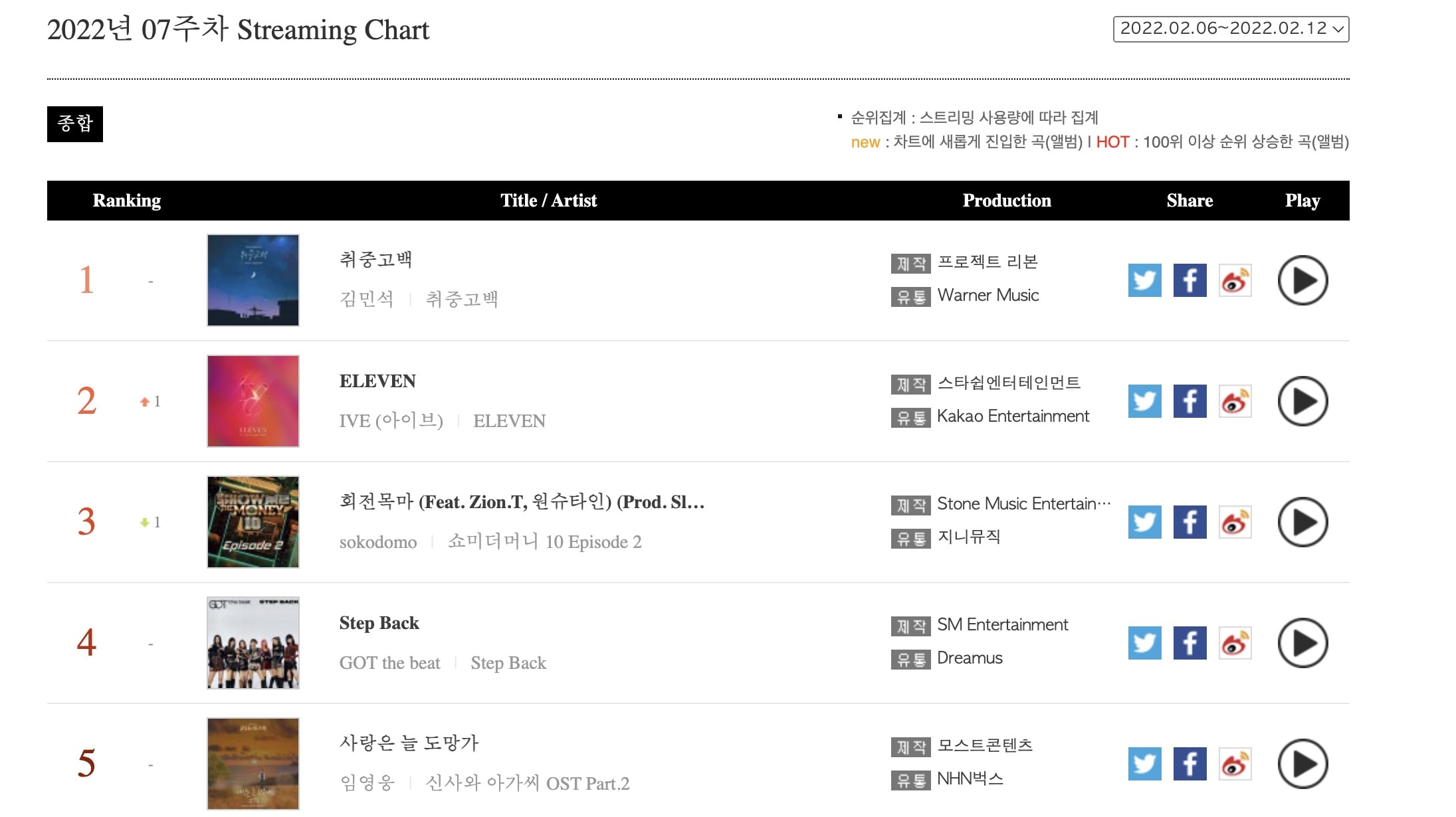 The streaming chart for this week looks similar to the digital chart and is almost identical to last week’s streaming chart. “Drunken Confession” held on to the No. 1 spot, while “ELEVEN” and “Merry-Go-Round” swapped spots at No. 2 and No. 3. “Step Back” maintained its position at No. 4 on this chart as well, while Lim Young Woong’s “Young Lady and Gentleman” OST “Love Always Run Away” stayed steady at No. 5. 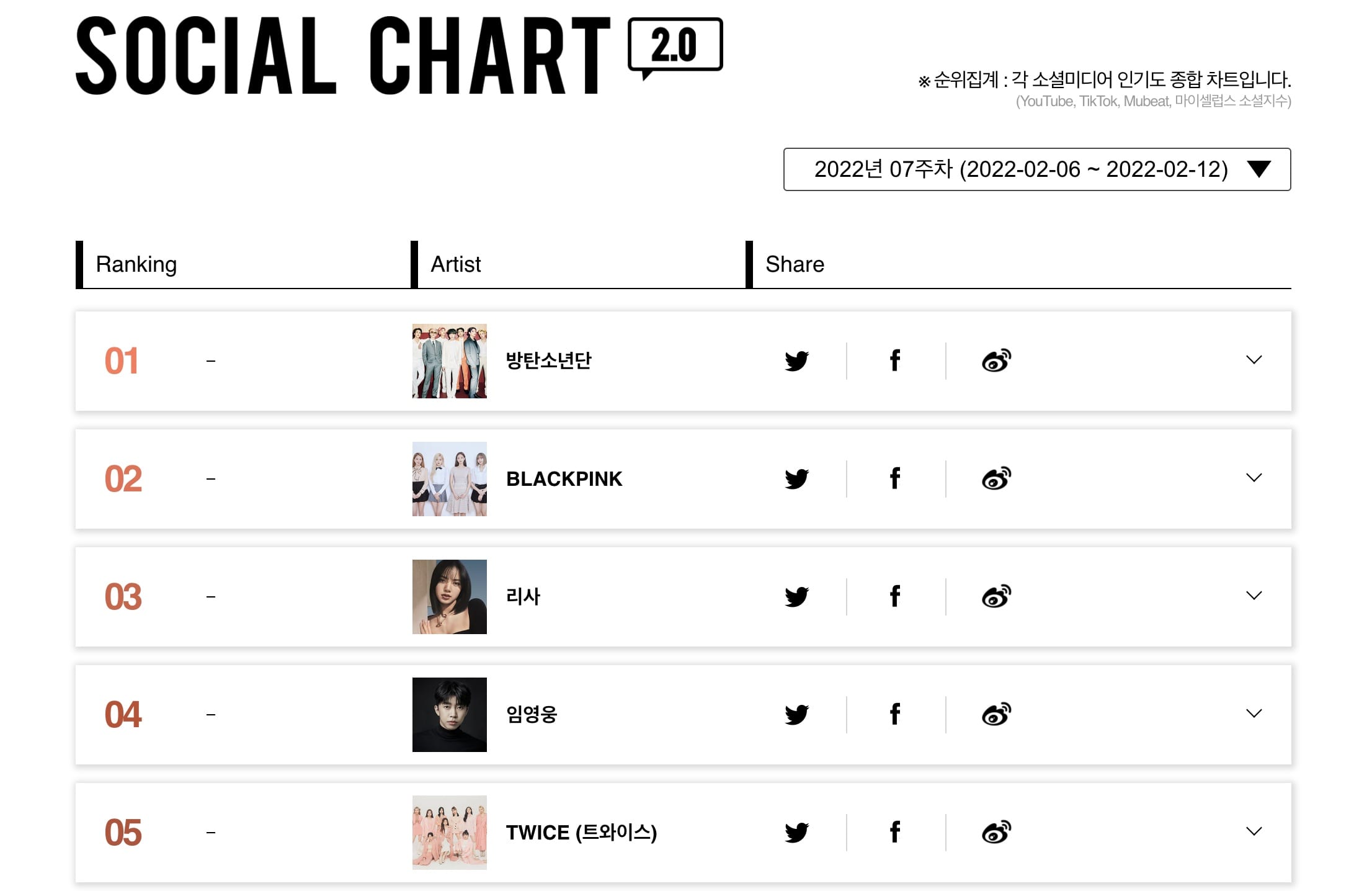 Finally, the top five entries on this week’s social chart were the same as last week, with BTS, BLACKPINK, BLACKPINK’s Lisa, Lim Young Woong, and TWICE in that order.