Gaon Chart has released its weekly chart rankings for the week of January 30 to February 5!

ITZY’s studio album “CRAZY IN LOVE” climbed back up to No. 1 on this week’s physical album chart, with Choi Ye Na’s “ˣ‿ˣ (SMiLEY)” taking No. 2.

TXT, TWICE, and BTS all made huge leaps back up the chart to land within the top five. The No. 3 spot went to TXT’s “minisode1: Blue Hour,” while TWICE’s “Formula of Love: O+T=<3 (Result File Ver.)” and BTS’s “Love Yourself: Her” ranked fourth and fifth respectively. 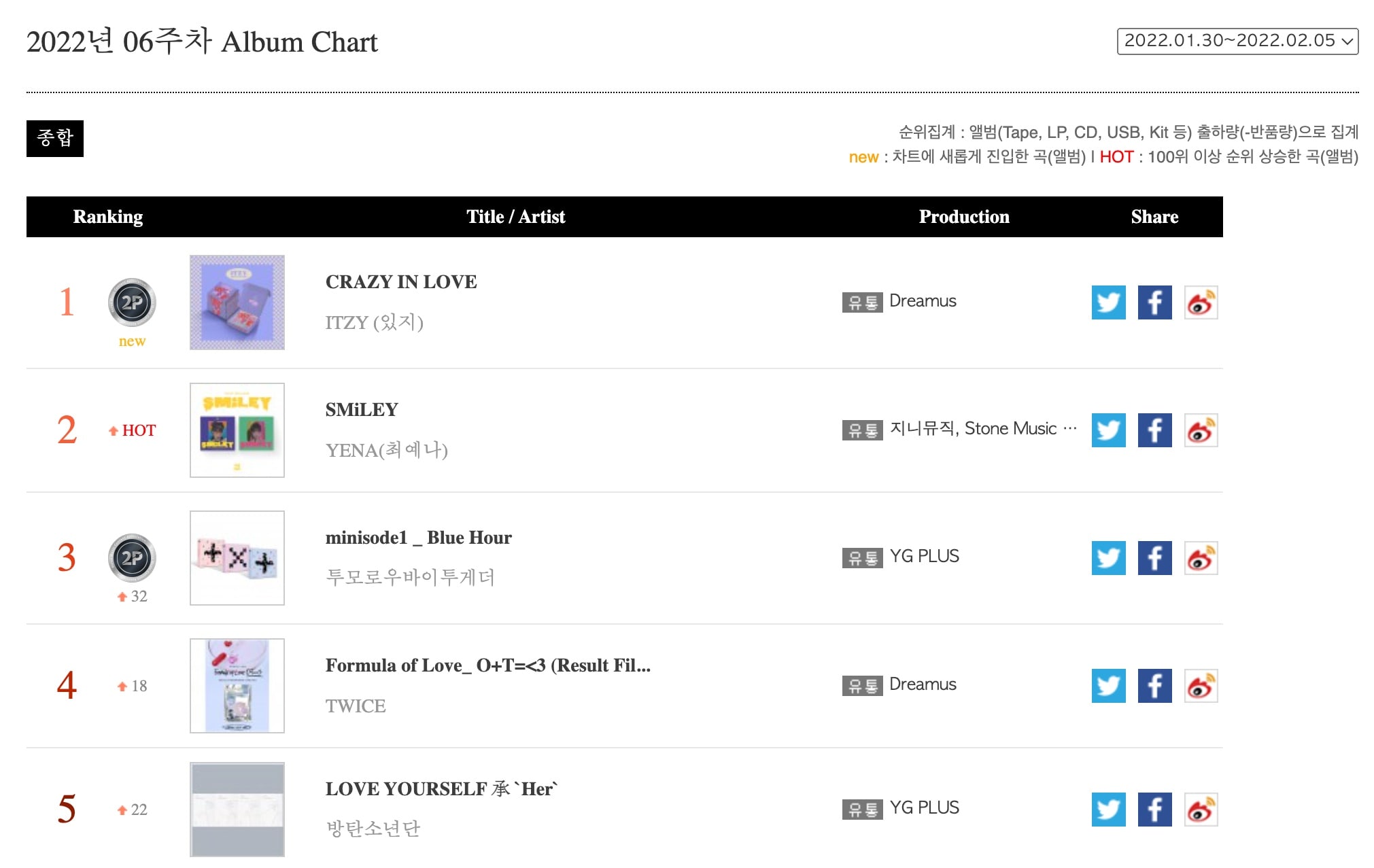 Sitting at both No. 1 and No. 3 of Gaon’s weekly retail album chart was NCT 127’s repackaged album “Favorite,” with the Kit version of the album topping this week’s chart. BLACKPINK’s Lisa’s debut solo album “LALISA” also jumped 30 places to take the No. 2 spot this week. 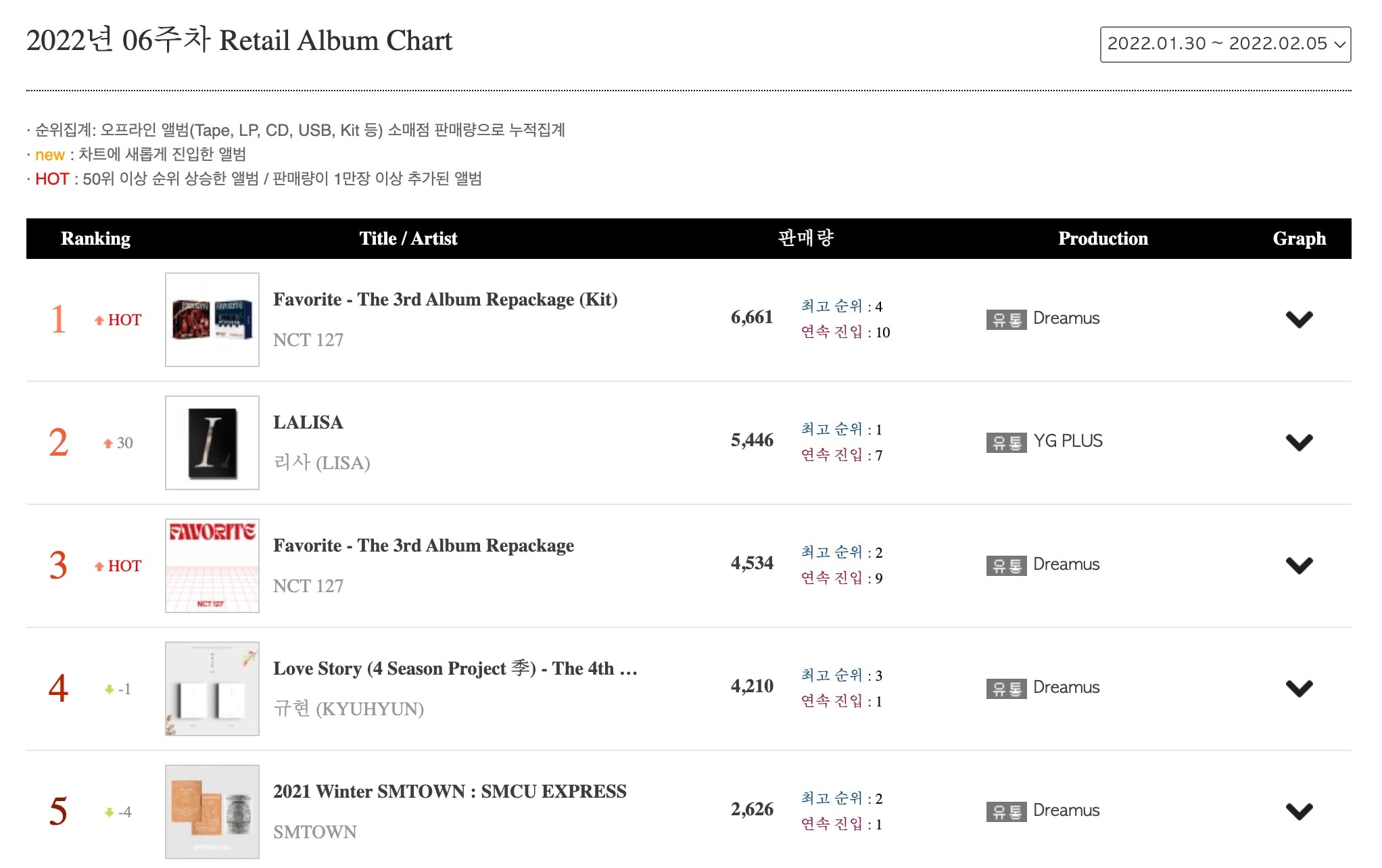 Tophyun’s “Horang Suwolga” rose to No. 3, trailed by Lee Chan Won’s remake of Paul Kim’s “Every Day, Every Moment” at No. 4 and Lim Young Woong’s “Love Always Runs Away” at No. 5. 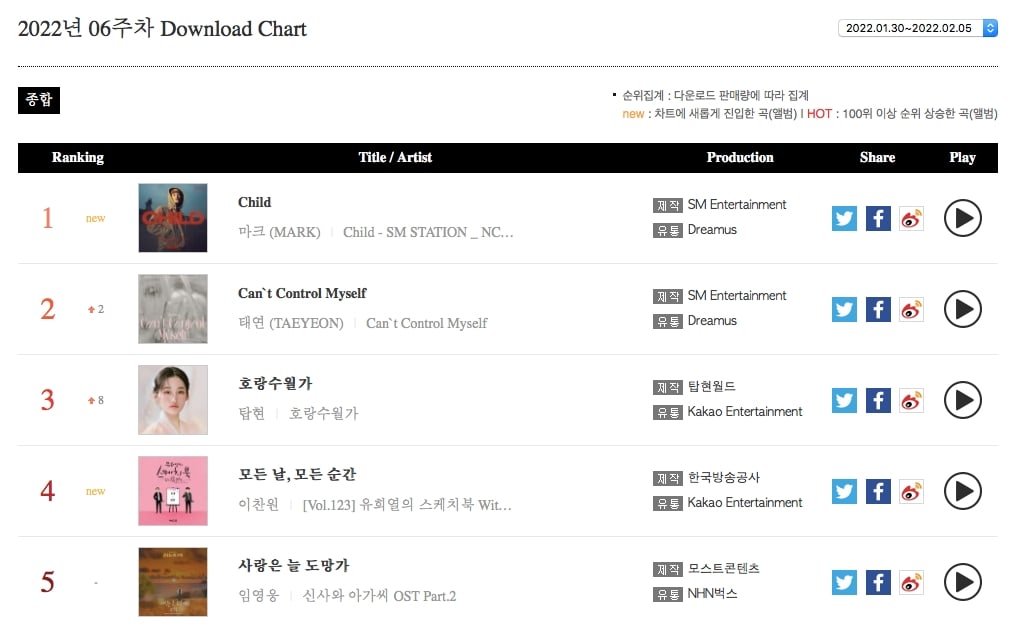 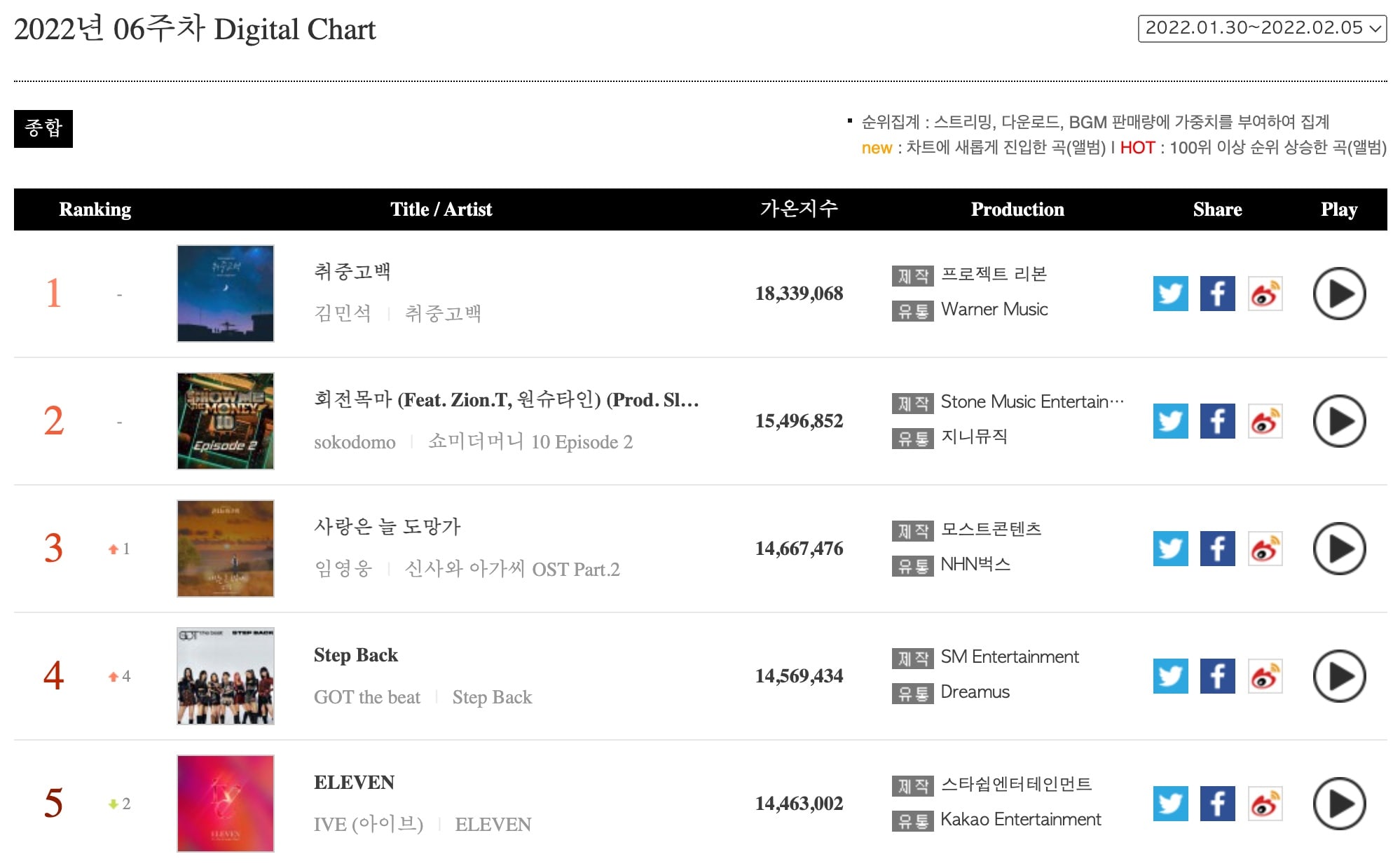 Melomance’s Kim Min Seok’s “Drunken Confession” also continued to top the weekly streaming chart, with sokodomo’s “Merry-Go-Round” and IVE’s “ELEVEN” holding onto their respective spots at No. 2 and No. 3.

GOT the beat’s “Step Back” rose to No. 4 this week, while Lim Young Woong’s “Love Always Runs Away” rounded out the top five. 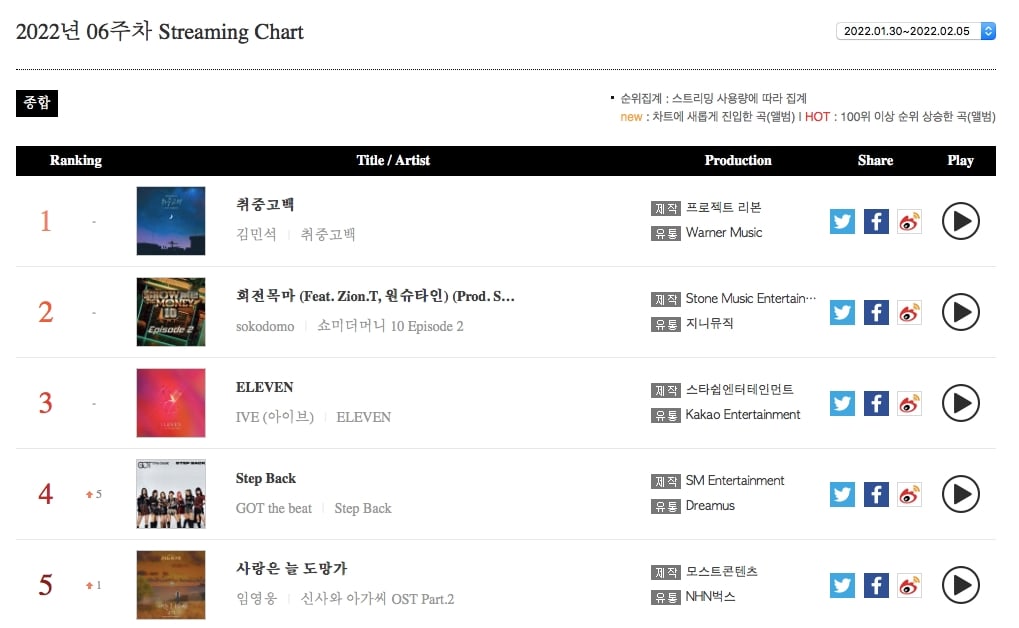 The top five artists on the weekly social chart remained the same as last week, with BTS at No. 1, BLACKPINK at No. 2, BLACKPINK’s Lisa at No. 3, Lim Young Woong at No. 4, and TWICE at No. 5. 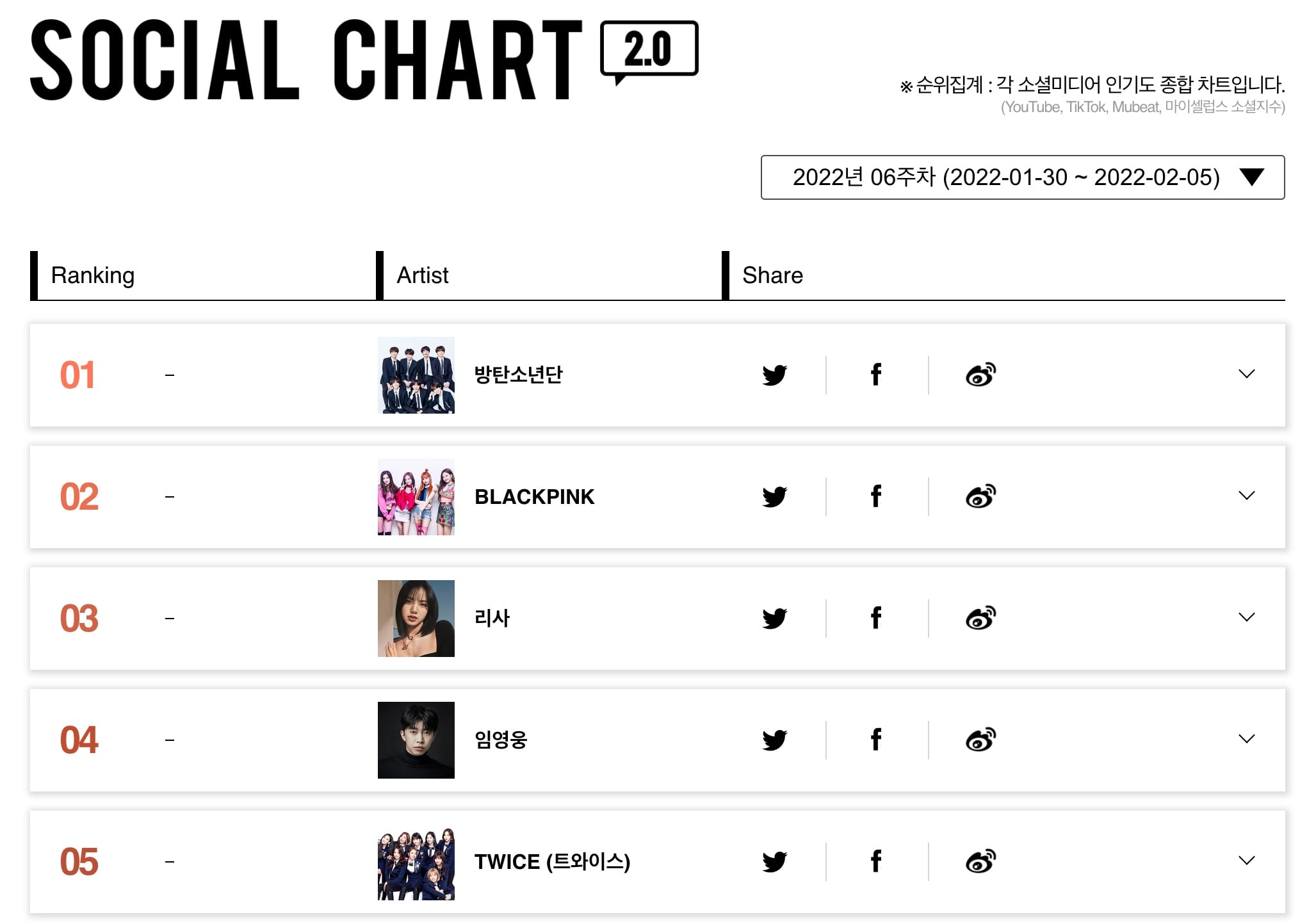