Gaon has released their weekly chart rankings for the week of February 13 to February 19. 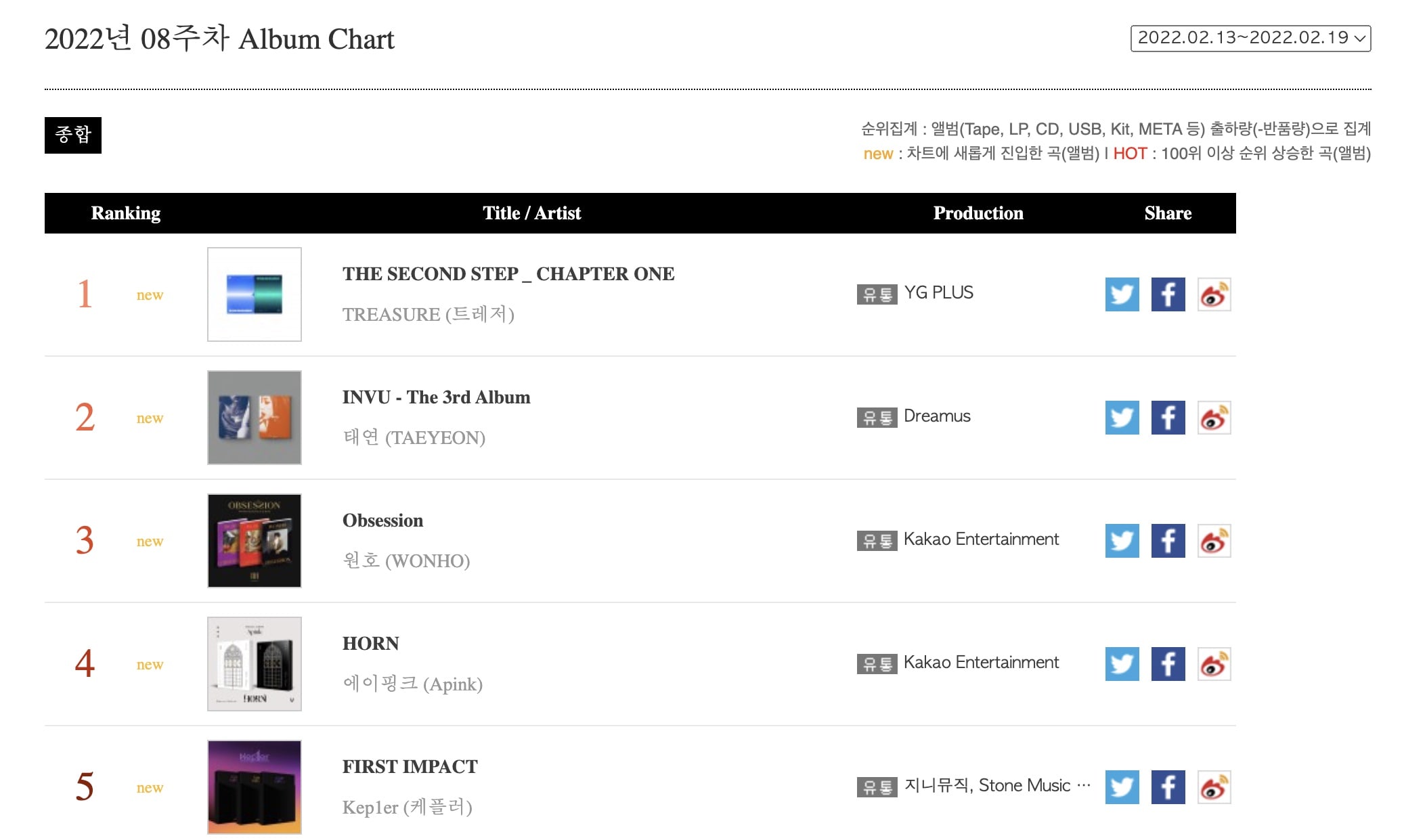 All of the top five for the album chart for the week of February 13 to 19 are new entries, with TREASURE’s long-awaited comeback with “THE SECOND STEP : CHAPTER ONE” taking the top spot. Girls’ Generation’s Taeyeon’s third studio album “INVU” ranked No. 2, followed by Wonho’s single album “Obsession” at No. 3, Apink’s special album “HORN” at No. 4, and Kep1er’s debut EP “FIRST IMPACT” at No. 5. 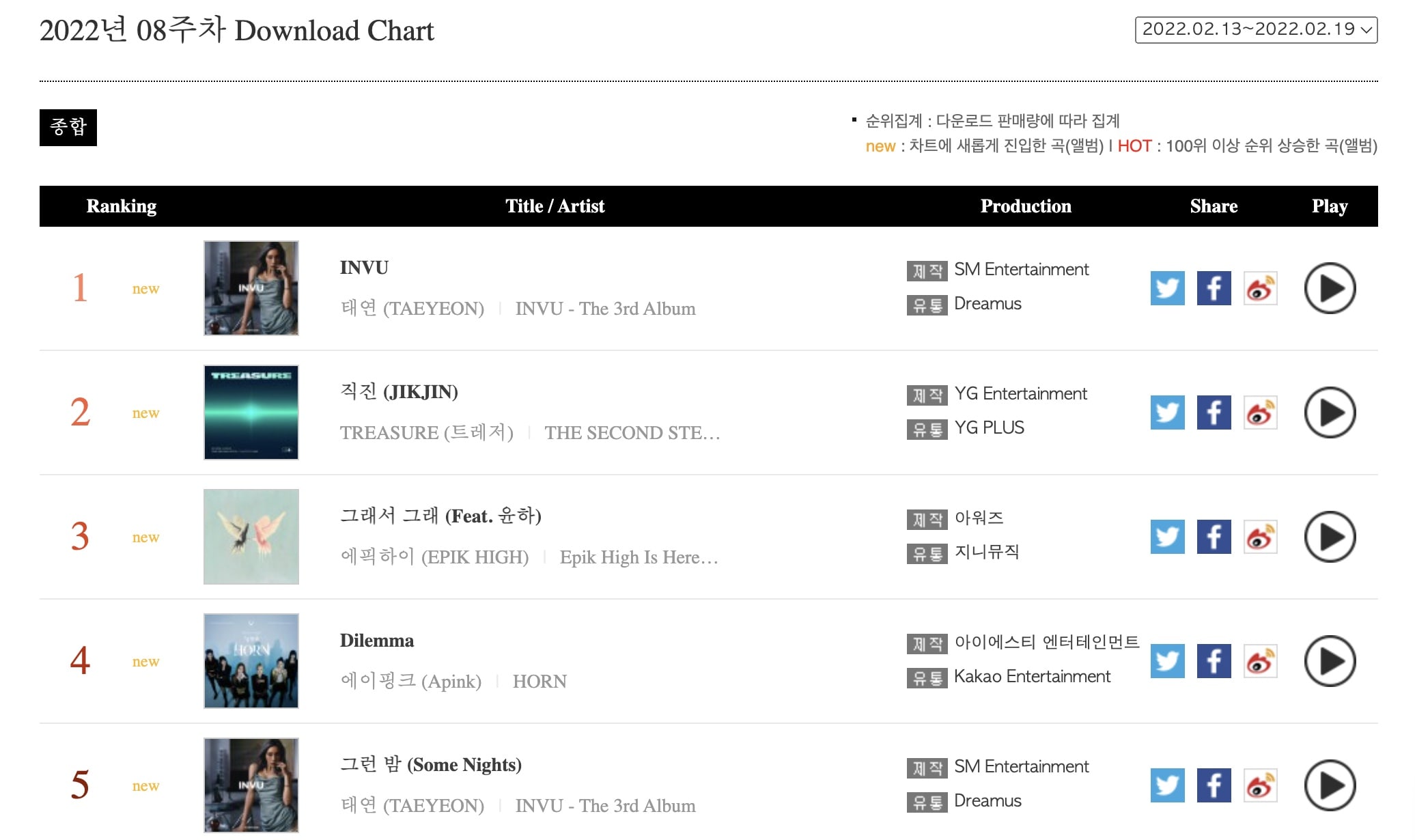 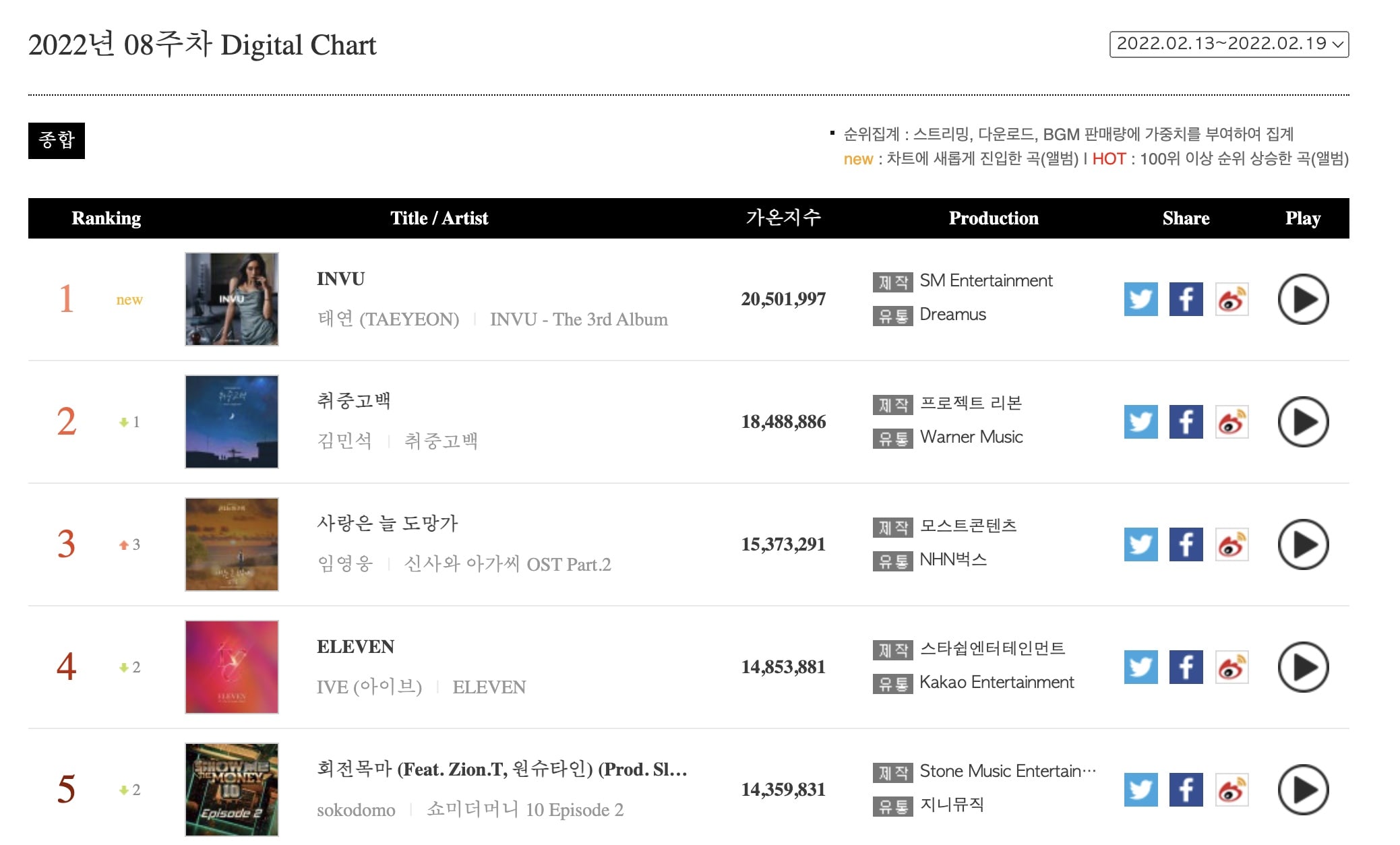 Taeyeon’s “INVU” also topped the digital chart this week, dethroning MeloMance’s Kim Min Seok’s “Drunken Confession” to No. 2. Lim Young Woong’s “Love Always Run Away” rose three places from last week to take No. 3, while IVE’s “ELEVEN” and sokodomo’s “Merry-Go-Round” both dropped two places to No. 4 and No. 5 respectively. 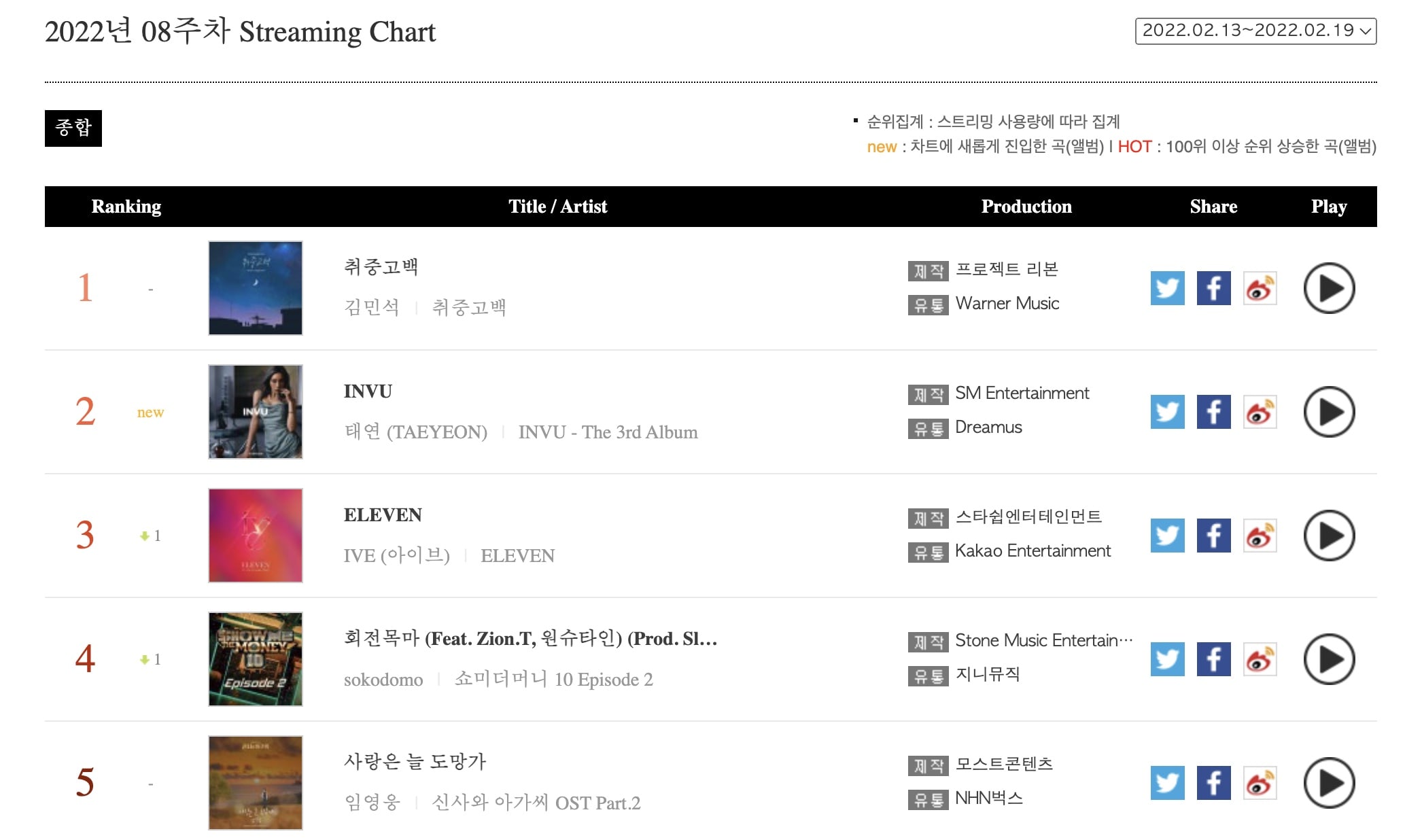 Kim Min Seok’s “Drunken Confession” held on to the No. 1 spot on the streaming chart for this week, but Taeyeon’s “INVU” debuted in the respectable position of No. 2. IVE’s “ELEVEN” and sokodomo’s “Merry-Go-Round” dropped one place each on this chart to No. 3 and No. 4 respectively, while Lim Young Woong’s “Love Always Run Away” maintained its position at No. 5 from last week. 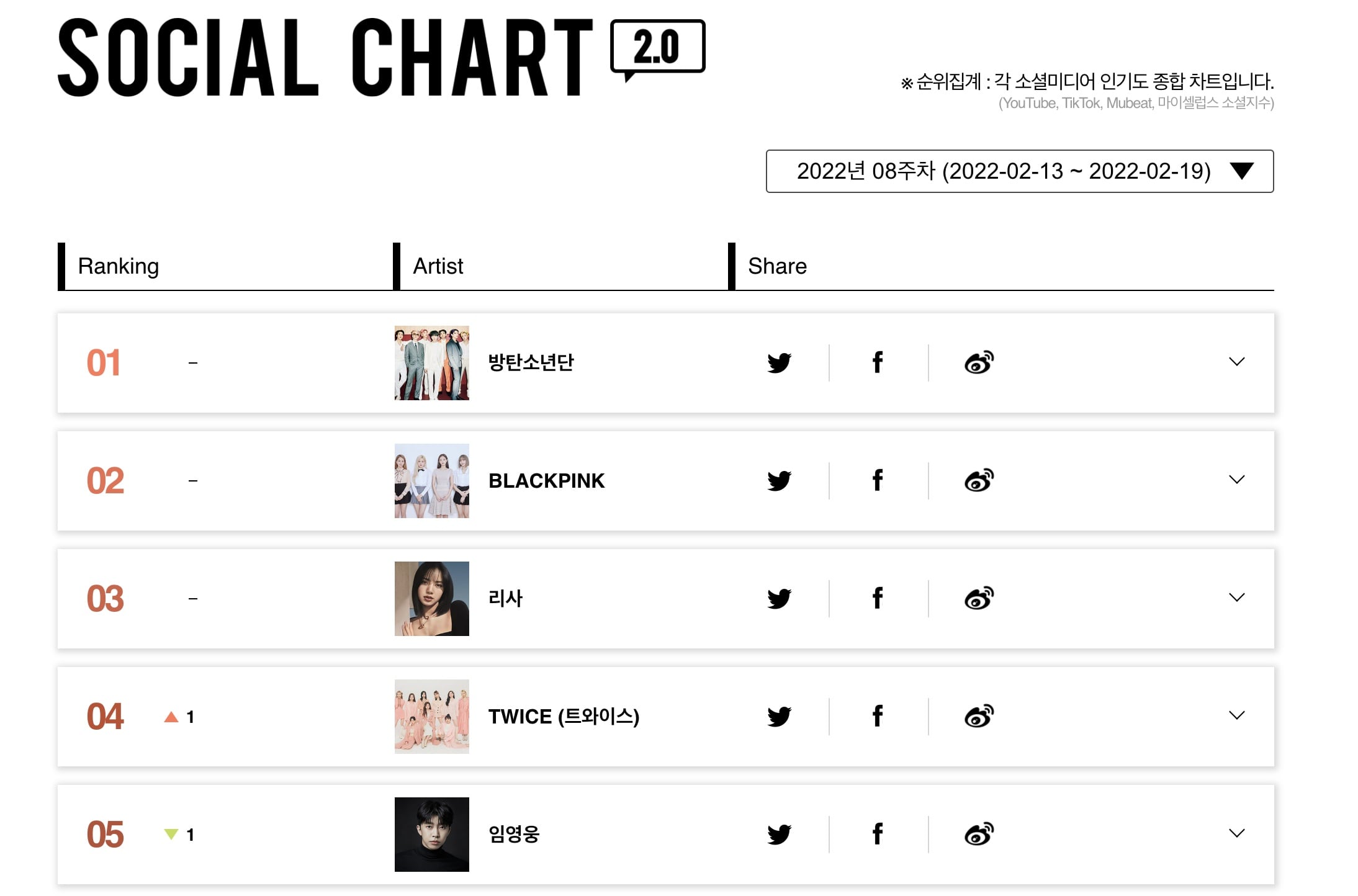 Gaon’s weekly social chart featured a change for the first time in weeks, with trot singer Lim Young Woong dropping from his usual No. 4 position to No. 5, overtaken by TWICE. BTS, BLACKPINK, and BLACKPINK’s Lisa maintained their positions from No. 1 to No. 3.