Gaon has released its weekly chart rankings for the week of February 20 to February 26. 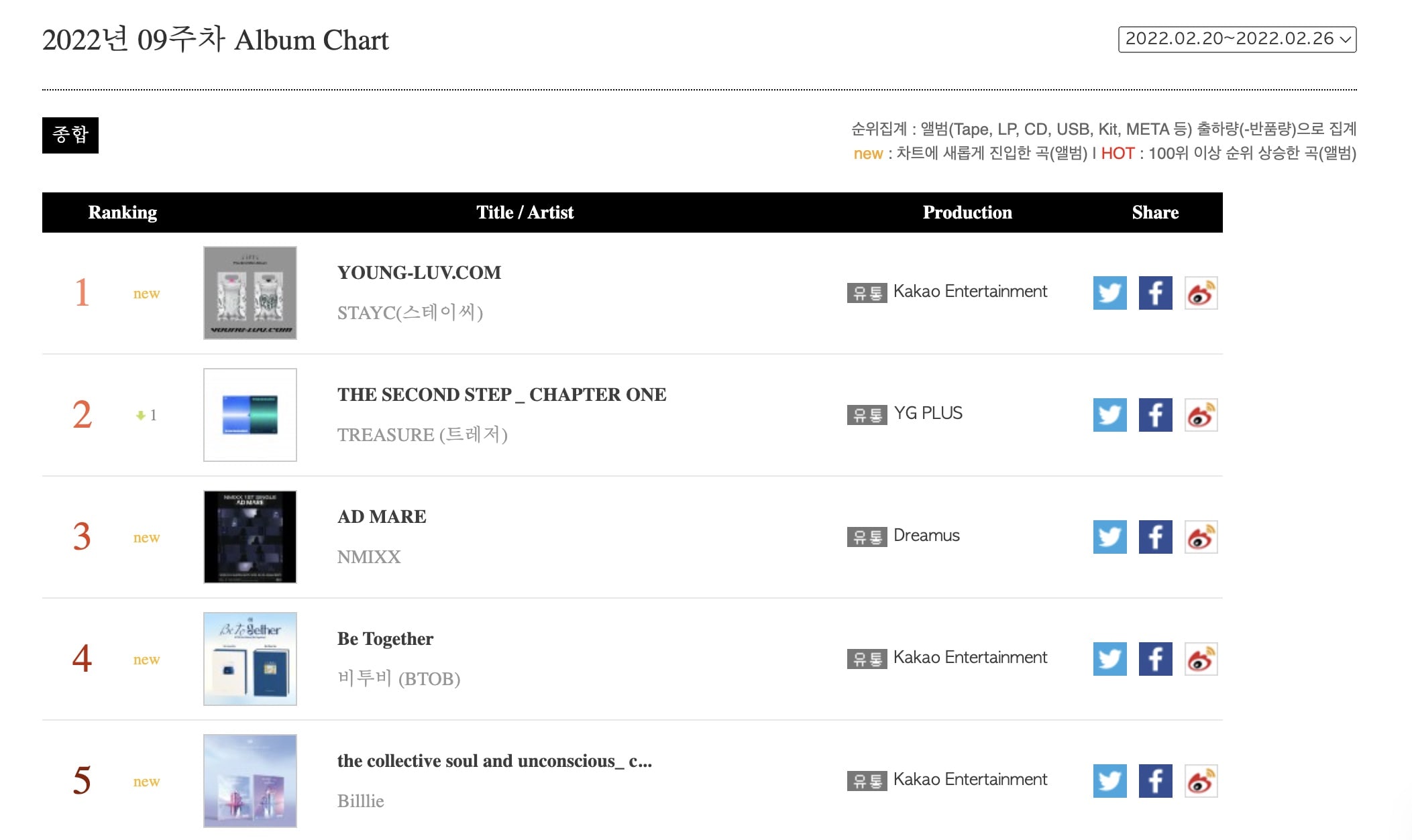 STAYC’s new album, “YOUNG-LUV.COM,” debuted at No. 1 on the album chart for the week of February 20 to 26. With the exception of TREASURE’s “THE SECOND STEP : CHAPTER ONE,” which dropped down from No. 1 last week to No. 2, all the albums in the top five are new entries. NMIXX’s debut album “AD MARE” ranked No. 3, followed by BTOB’s third studio album “Be Together” at No. 4 and Billlie’s “the collective soul and unconscious: chapter one” at No. 5. 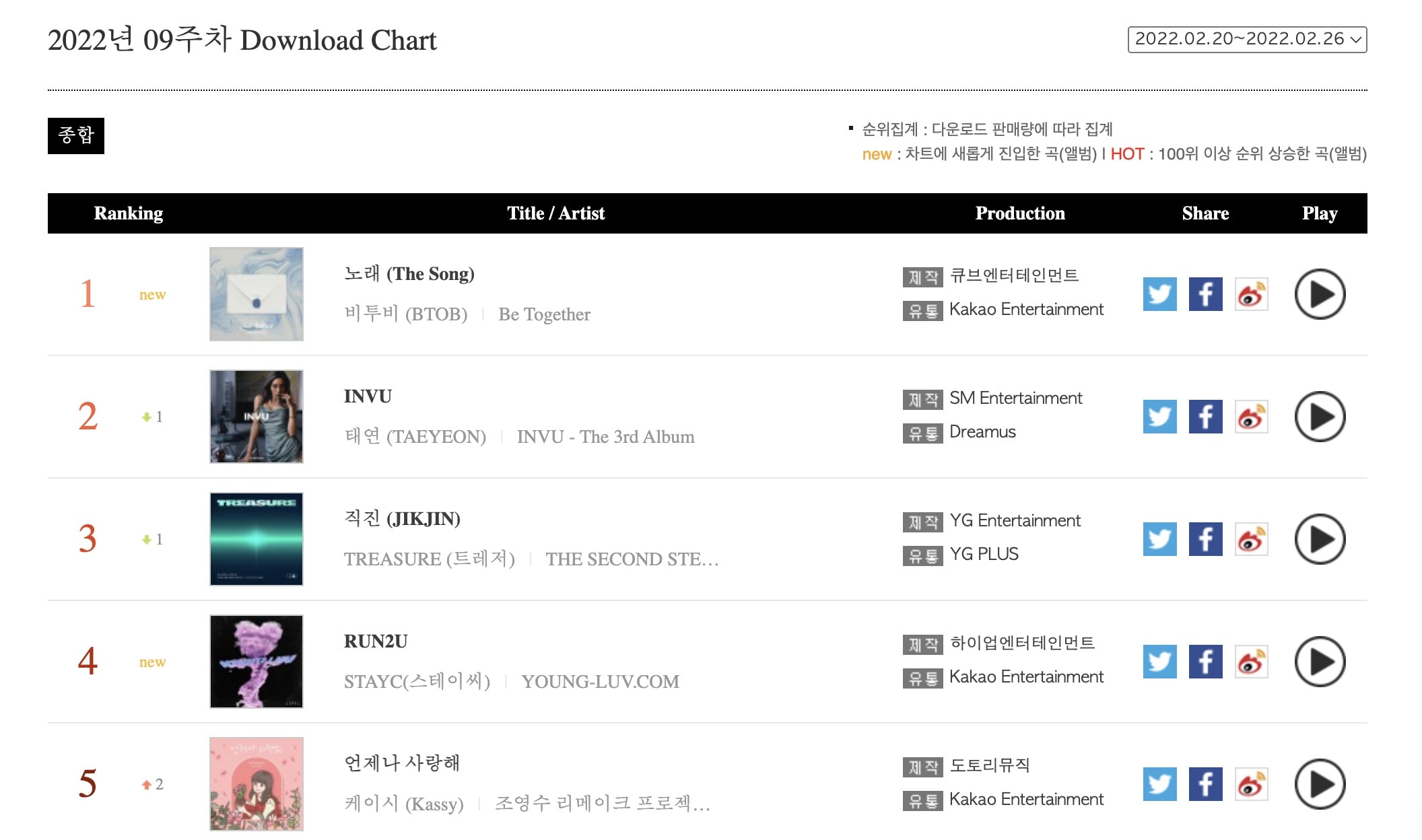 BTOB’s “The Song” topped the download chart for the week of February 20 to 26. Girls’ Generation’s Taeyeon’s “INVU” and TREASURE’s “JIKJIN” held on from last week, albeit down one place to No.2 and No. 3 respectively. STAYC’s “RUN2U” debuted at No. 4, and Kassy’s “Always Love You” rose two places to round out the top five. 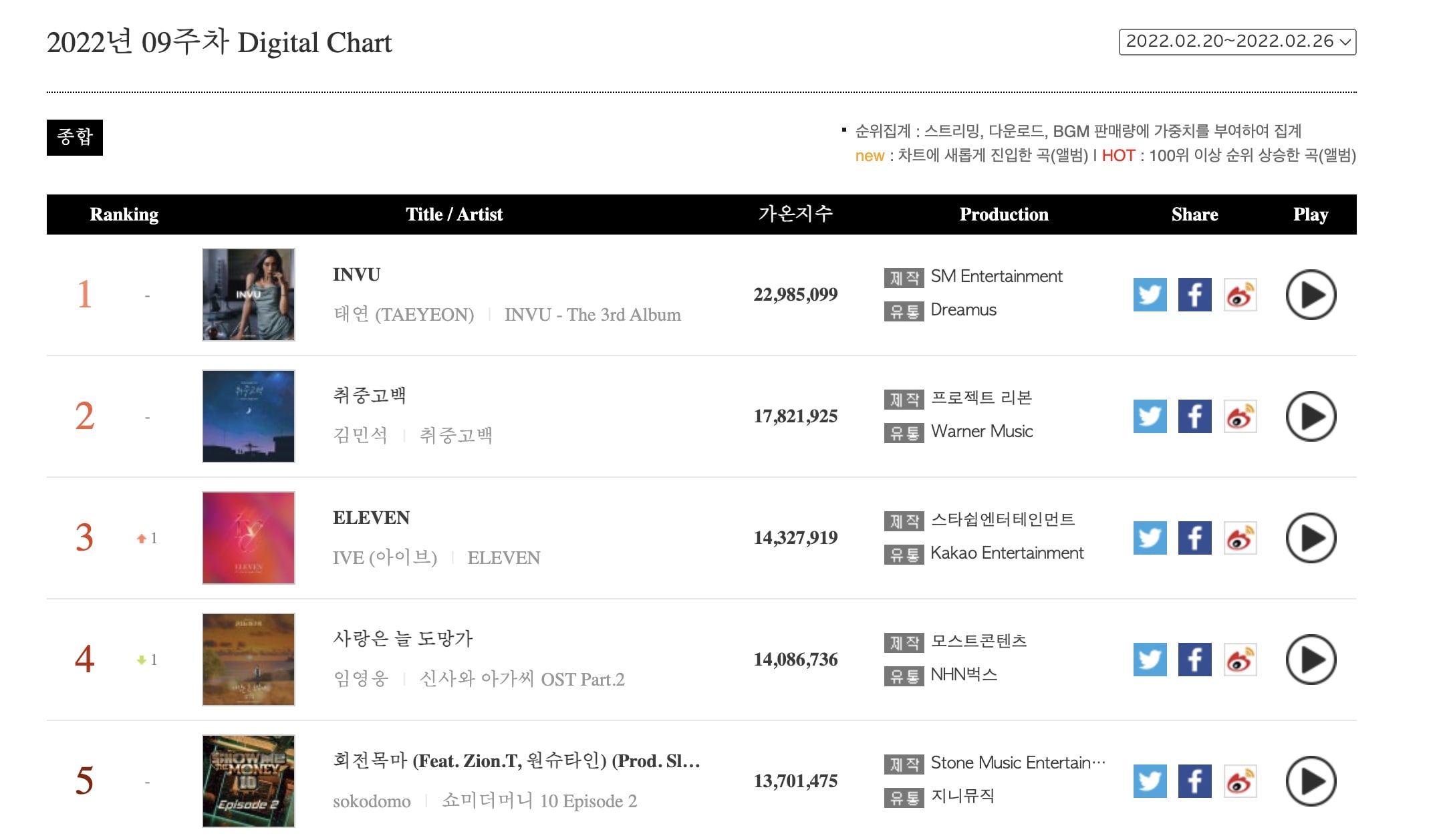 The digital chart this week looks similar to last week, with Taeyeon’s “INVU” and MeloMance’s Kim Min Seok’s “Drunken Confession” holding on to the top two spots. IVE’s “ELEVEN” and Lim Young Woong’s “Love Always Run Away” traded places at No. 3 and No. 4, and sokodomo’s “Merry-Go-Round” maintained its position at No. 5. 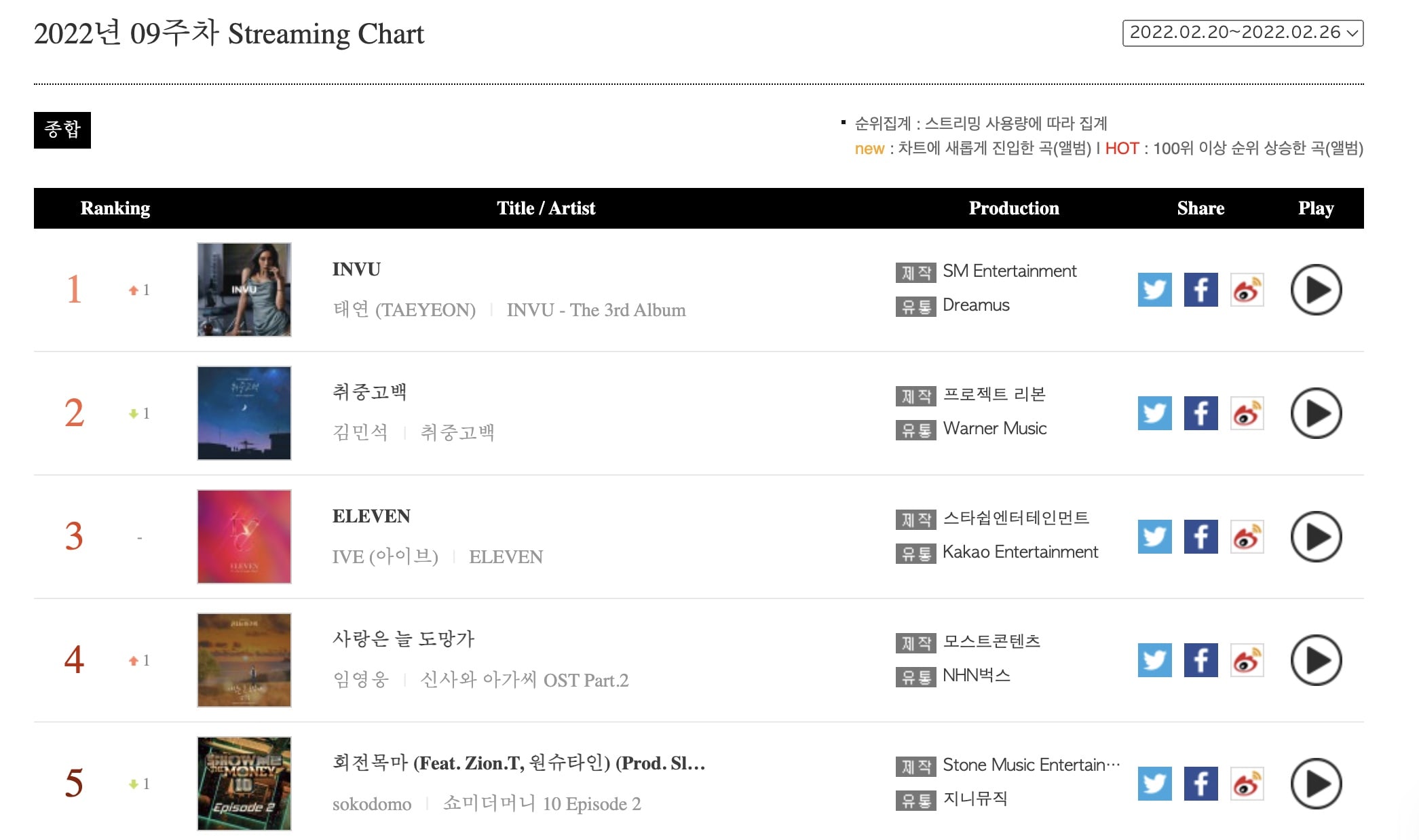 Similar to the digital chart, the streaming chart for this week features the same five entries as last week in a different order. Taeyeon’s “INVU” rises to No. 1, while Kim Min Seok’s “Drunken Confession” drops to No. 2. IVE’s “ELEVEN” maintained its place at No. 3, while Lim Young Woong’s “Love Always Run Away” rose to No. 4 and sokodomo’s “Merry-Go-Round” dropped to No. 5. 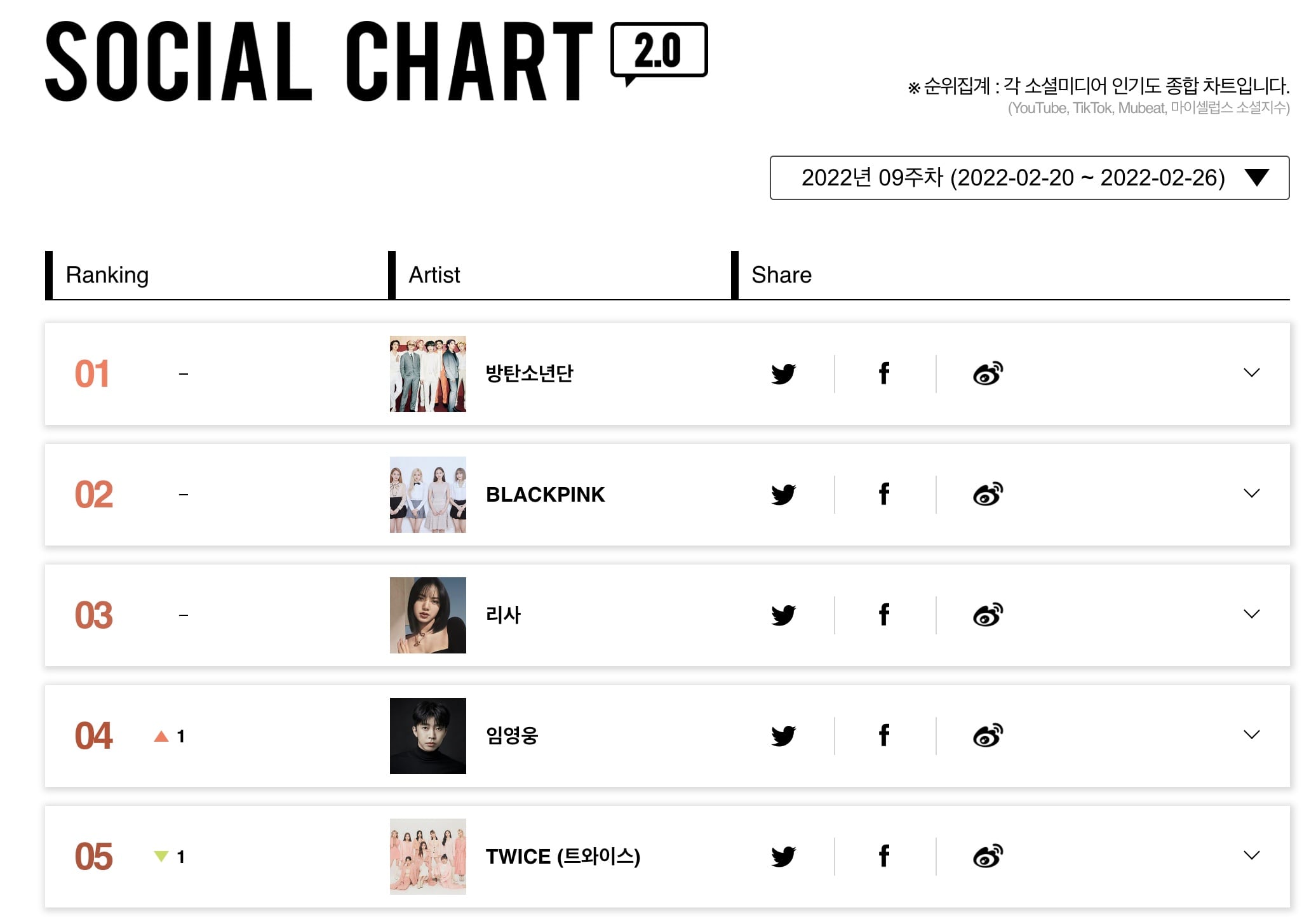