3 Key Points To Look Forward To In The 2nd Half Of “Love (Ft. Marriage And Divorce) 3”

Things are about to get more dramatic in the second half of “Love (ft. Marriage and Divorce) 3”!

Here are three key points to look out for in the upcoming episodes!

1. Will Lee Si Eun and Sa Pi Young be able to remarry?

Lee Si Eun, who was the first of the trio to get divorced, received warm comfort from Seo Ban, and Sa Pi Young, who lost trust in men due to her ex-husband’s affair, started to have heart-pounding feelings for Seo Dong Ma. The two women, who proved that dating in one’s 40s and 50s is just as exciting, received bold proposals from the two brothers. However, they’re both met with tough obstacles. Lee Si Eun will have to face two figures who are opposed to her marriage: her ex-husband Park Hae Ryoon (Jeon No Min) and Seo Ban’s father (Han Jin Hee). Sa Pi Young still has to tell her daughter Ji Ah (Park Seo Kyung) about Seo Dong Ma, and curiosity is mounting over how she will react to the news. 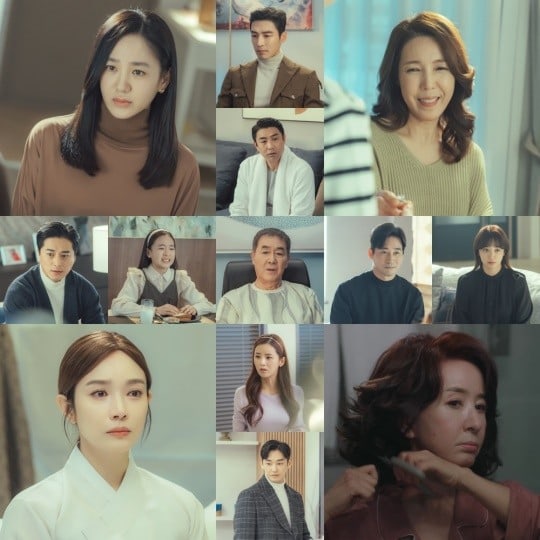 Song Won, who previously endured hardships due to infertility, finally gave birth to the child she had been longing for. Unfortunately, she passed away not long after her son was born. Perhaps that’s why she keeps appearing in Pan Sa Hyun’s (Kang Shin Hyo’s) dreams. The previous episode showed her floating around Pan Sa Hyun’s home as a ghost, and even Boo Hye Ryung (Lee Ga Ryung) witnessed her. This is the second ghost to appear in the series, following Shin Ki Rim (No Joo Hyung) who had lingered around to get revenge against Kim Dong Mi (Lee Hye Sook). There are various speculations about what Song Won will do next.

The ending of episode 8 shocked viewers when Kim Dong Mi suddenly started to chop her hair off with a pair of kitchen scissors. Previously, she fled to Singapore after being haunted by Shin Ki Rm. When she came back, she was a completely different person. Before, she used to constantly get into arguments with Sa Pi Young and Ah Mi (Song Ji In). After her trip, she turned into an angel and got along with both women. However, the part where she started to cut her own hair gave viewers goosebumps as it hinted there is something terribly off about her.

The production crew teased, “We ask for your interest and anticipation in the rest of the story of ‘Love (ft. Marriage and Divorce) 3,’ where the roller coaster of excitement, strangeness, and mystery will continue to run endlessly.”

Check out Park Joo Mi in “My ID Is Gangnam Beauty“: