Watch: Ahn Hyo Seop And Kim Sejeong Fill The Set With Laughter Behind The Scenes Of “A Business Proposal”

SBS’s “A Business Proposal” has provided fans another behind-the-scenes look at the drama!

Based on a popular web novel that has been adapted into a webtoon, “A Business Proposal” is a romantic comedy about an office employee who goes on a blind date with her company’s CEO in place of a friend while hiding her identity. Ahn Hyo Seop stars as chaebol heir Kang Tae Moo, who has everything from looks and brains to wealth and business savvy. Kim Sejeong stars as food researcher Shin Ha Ri, who stands in for her best friend and chaebol heiress Jin Young Seo (Seol In Ah) at a blind date with Kang Tae Moo.

The video begins as Ahn Hyo Seop makes up some ad-libs to wake up Kim Sejeong from her slumber. He jokes about poking her cheek, which makes even the director surprised by their detailed scenario. They end up scrapping the poking idea and going with a mild hair caress instead, but Kim Sejeong breaks into laughter when they attempt the scene. She hurriedly explains, “It’s because I’m embarrassed!”

Next, Seol In Ah sits next to Kim Min Kyu as they rehearse for a scene where his character offers up an investment. The director jokes, “He’s offering too little,” and Kim Min Kyu agrees as he mentions what a big company it is. Seol In Ah joins in as she says she’s not satisfied with the amount. When they return to rehearsing and Seol In Ah discusses where she’s going to get her funds, she mentions selling the ring given to her by Kim Min Kyu’s character. He goes silent for a moment before announcing, “Wait a minute, please,” and leaving the scene. 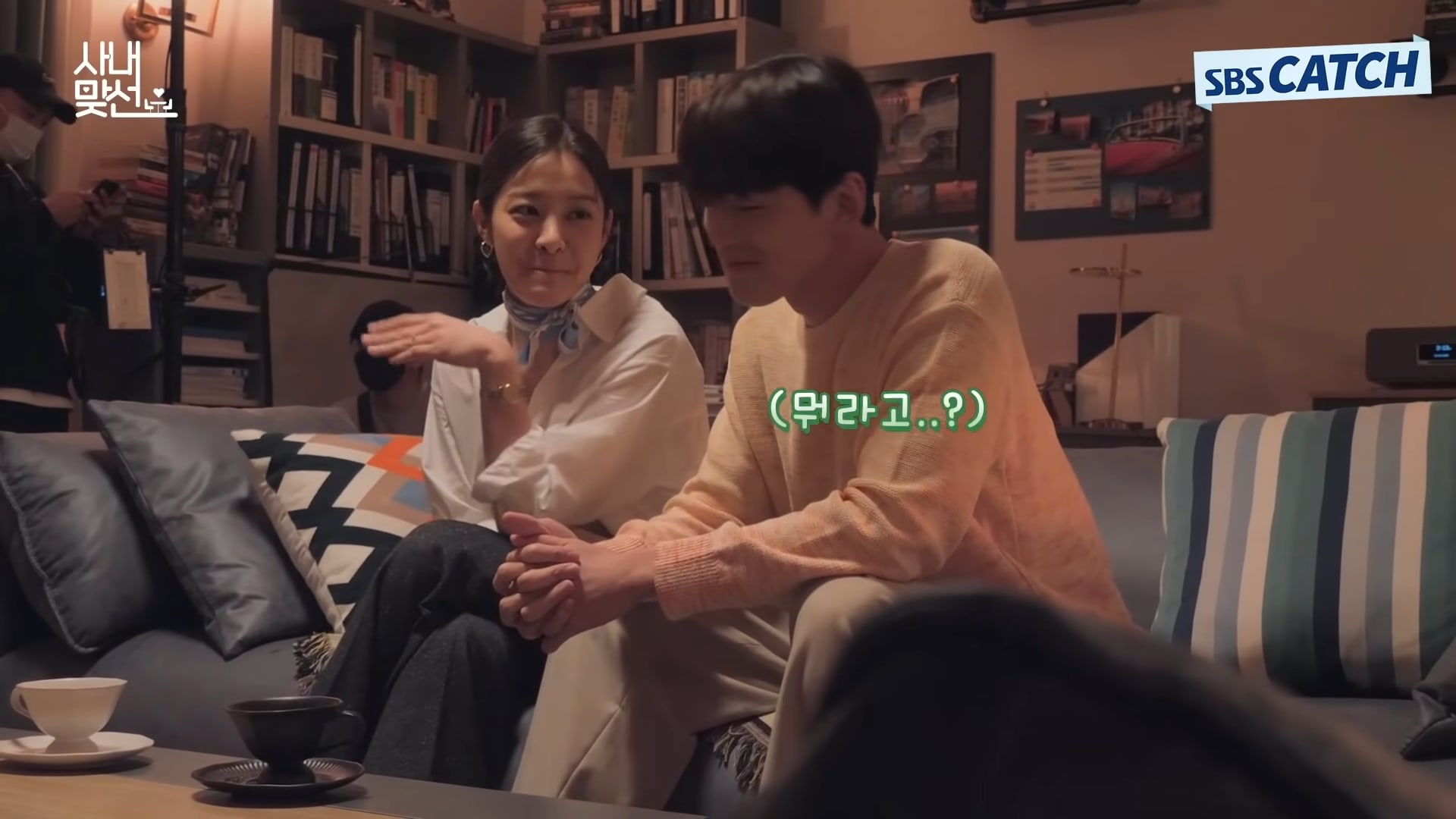 In another scene, Kim Sejeong rehearses running into Ahn Hyo Seop’s character who has secretly returned from a trip abroad. Kim Sejeong motions to him as she says, “He’s going to get hit a lot today.” When she practices playfully hitting him on the shoulder, he can’t help but apologize, causing the surrounding staff to break into laughter. Later on, Kim Sejeong can’t stop laughing after she hits him, which leads Ahn Hyo Seop to crack a smile as well.

Finally, the pair get ready for the proposal scene. Ahn Hyo Seop jokes about the size of the ring case making his chest appear larger, which gives him no choice but to conjure it up from a different place. They also crack jokes about what to do with the case after he takes out the ring, with Kim Sejeong suggesting, “Should I put it in my bag?”

When the time comes to open up the case, more difficulty ensues as the platform that the ring is on flips over. Finally, the pair work through all the specifics of the scene and get their laughter under control to immerse themselves in the touching scene. As they walk off camera, Ahn Hyo Seop says, “It’s all done!” Kim Sejeong challenges him, and when he replies that he gave her the ring, she jokes, “We’ll see how you do first.”

“A Business Proposal” aired its final episode on April 5.

Also check out Ahn Hyo Seop in “Lovers of the Red Sky” with subtitles below: