Gaon Chart has revealed its weekly chart rankings for April 3 to 9!

Debuting at the top spot of this week’s digital chart was BIGBANG’s “Still Life,” followed by last week’s No. 1 song “TOMBOY” by (G)I-DLE.

Swapping positions from last week were “Feel My Rhythm” by Red Velvet and “GANADARA” (featuring IU) by Jay Park. Maintaining the No. 5 spot was MeloMance’s “Love, Maybe” (from the OST of “A Business Proposal).” 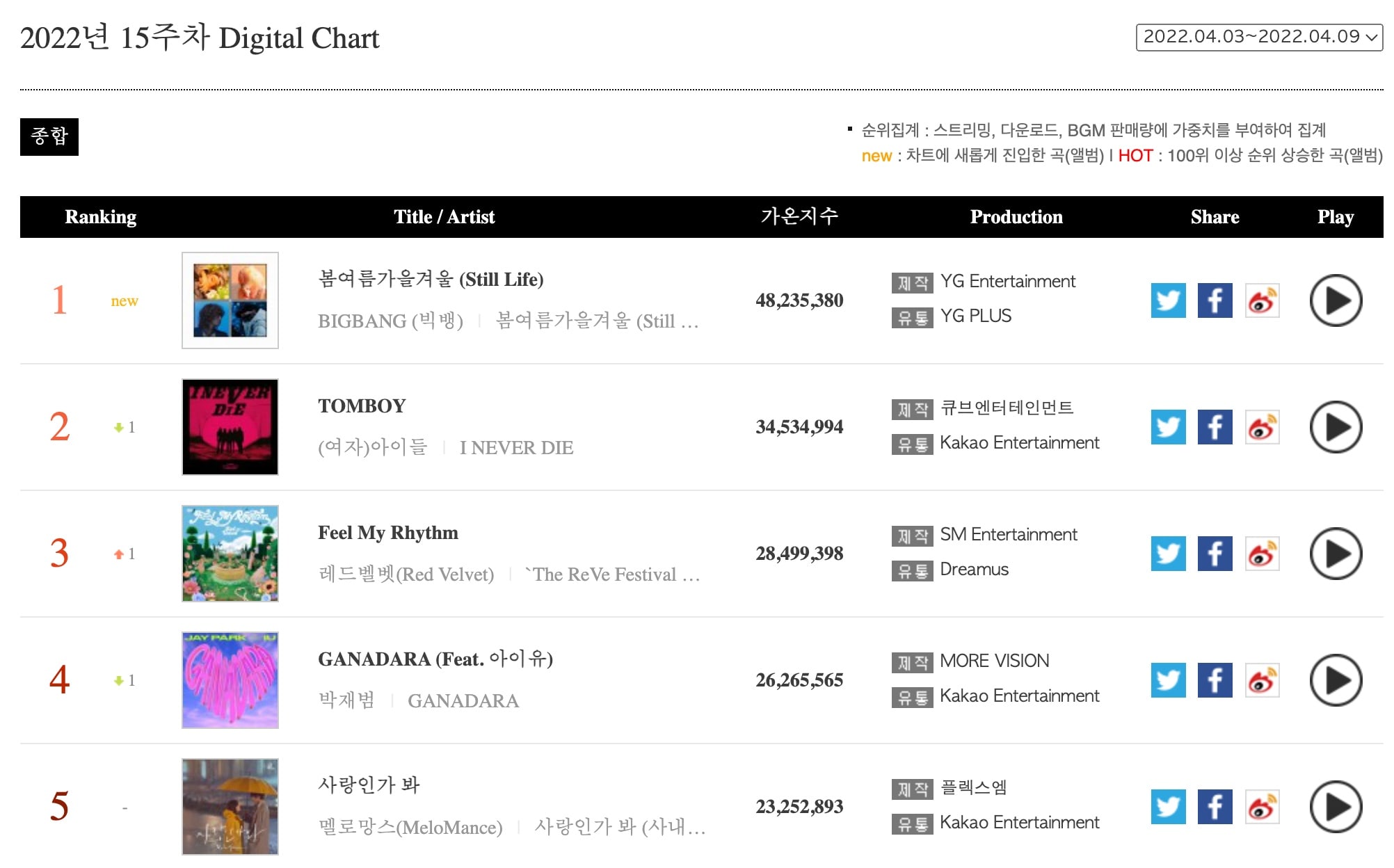 Also topping the download chart was BIGBANG’s new release “Still Life,” while IVE’s “LOVE DIVE” also made its debut in the No. 2 spot.

Coming in at third was NCT DREAM’s “Glitch Mode,” followed by (G)I-DLE’s “TOMBOY” and Red Velvet’s “Feel My Rhythm.” 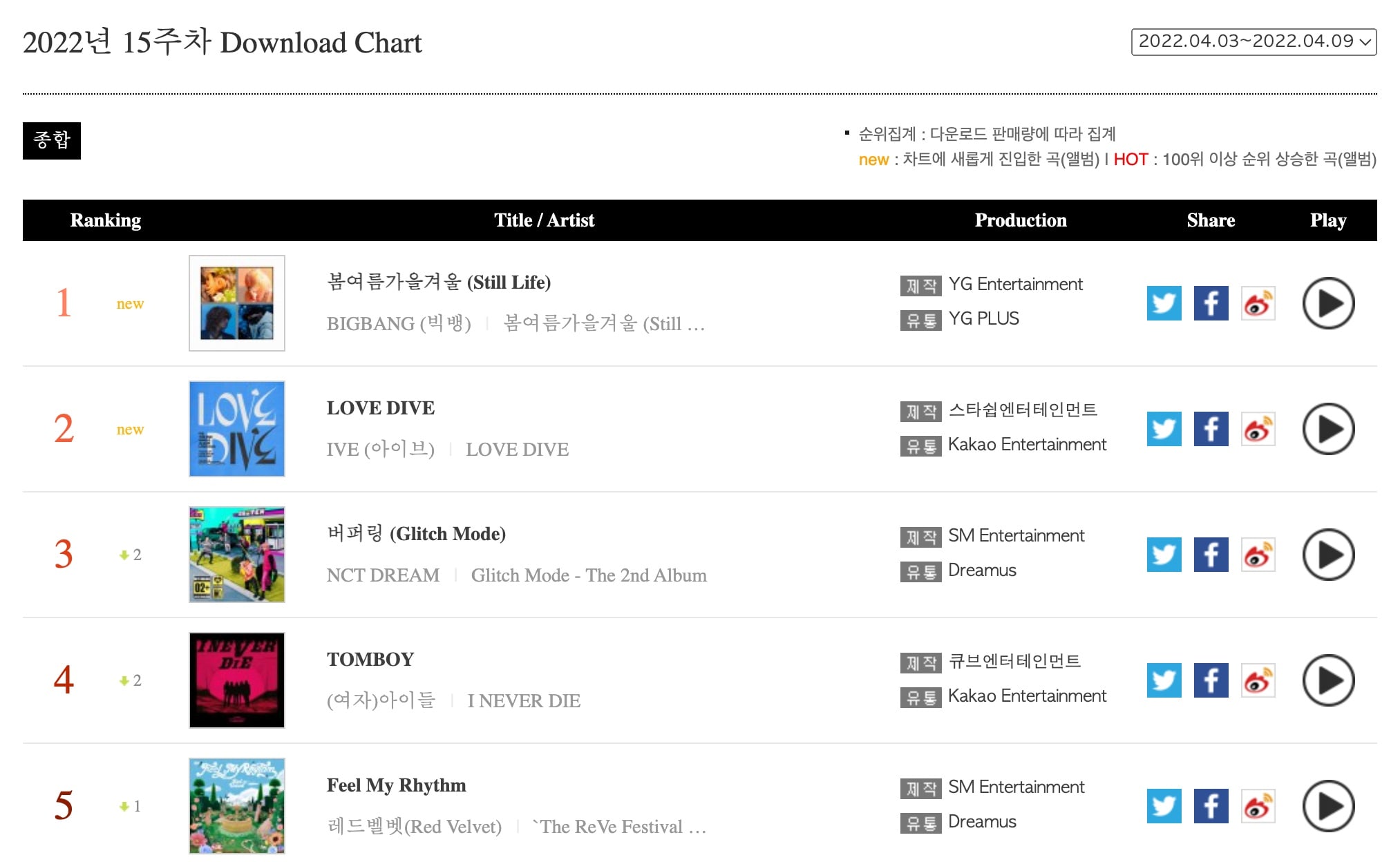 Going three for three this week was BIGBANG with “Still Life” as the group took the No. 1 spot on the streaming chart as well. BIGBANG was trailed by (G)-DLE’s “TOMBOY,” while Red Velvet’s “Feel My Rhythm” held onto its third place ranking.

No. 4 went to “GANADARA” (featuring IU) by Jay Park, followed by MeloMance’s “Love, Maybe” (from the OST of “A Business Proposal).” 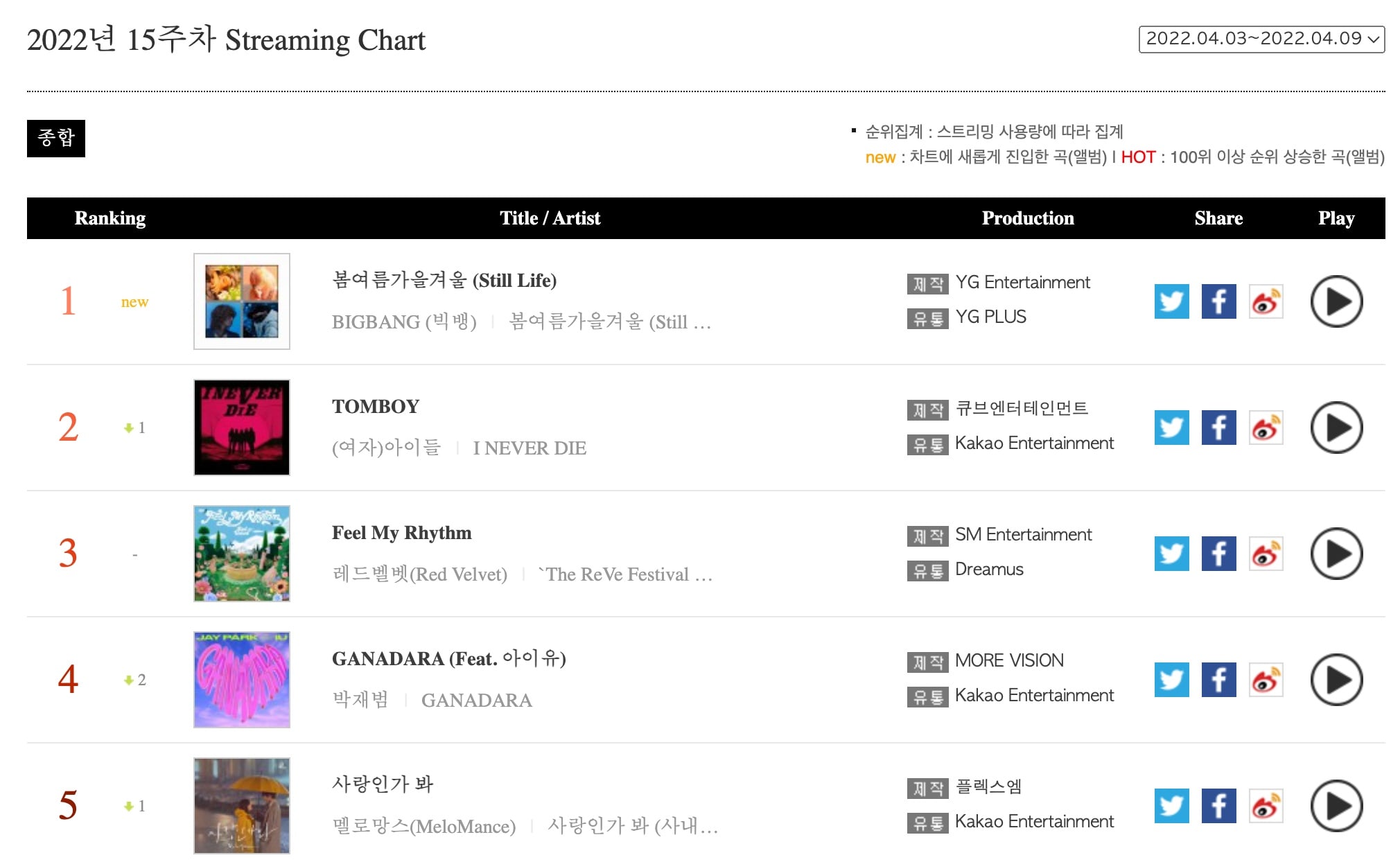 NCT DREAM took No. 3 with their second album “Glitch Mode” and Kwon Eun Bi’s “Color” made its debut at No. 4. Maintaining its spot in the top five was “The ReVe Festival 2022 – Feel My Rhythm” by Red Velvet. 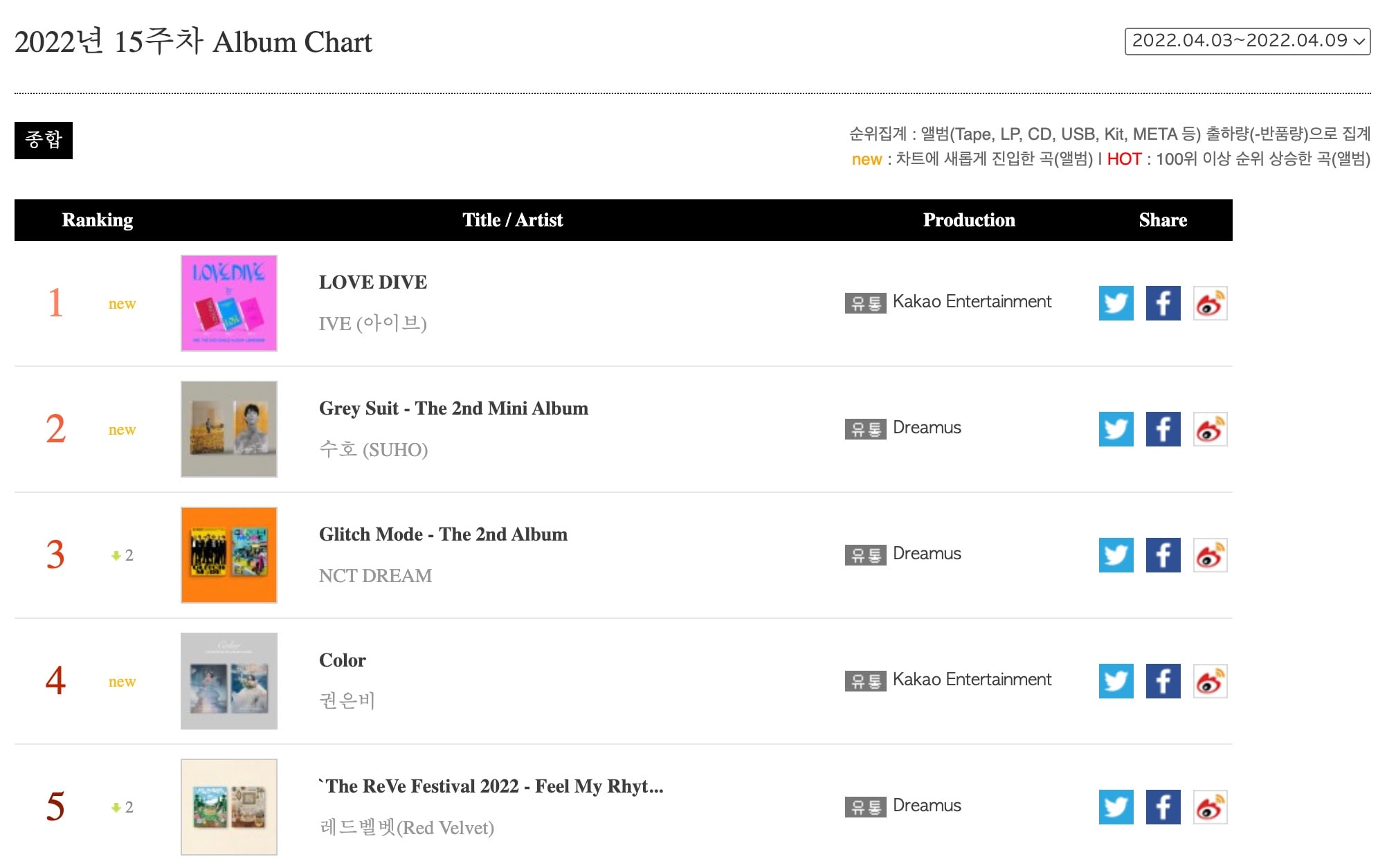 This week’s social chart remained the same as last week’s, with BTS on top, BLACKPINK at No. 2, BLACKPINK’s Lisa at No. 3, Lim Young Woong at No. 4, and Kim Ho Joong at No. 5. 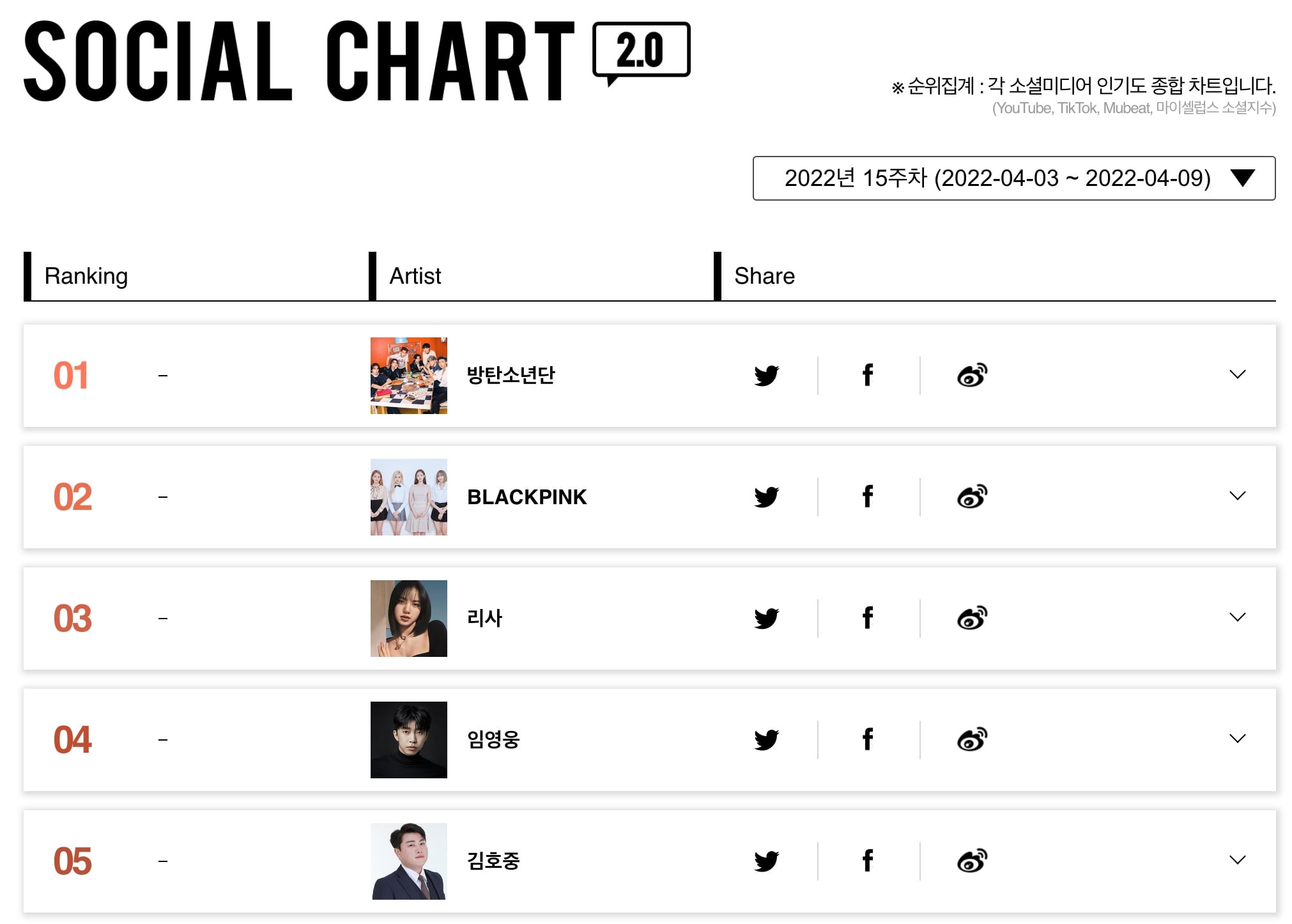