The latest episode of “Queendom 2” showcased the incredible unit battles of Round 3!

On the May 5 broadcast of Mnet’s “Queendom 2,” the units formed in the previous episode gave viewers a look at their unique group performances. While the dance units participated in their midway performance checks, the vocal teams officially kicked off the first half of Round 3.

During a workshop, all the teams on “Queendom 2” gathered to vote for the show’s “visual queen.” WJSN’s SeolA ultimately came out on top, with LOONA’s Heejin being voted second and Kep1er’s Xiaoting coming in third.

Next, the ladies voted for which member they wanted to recruit into their own teams. Tied in the second place spot were Kep1er’s Hikaru and Kim Chae Hyun, while Hyolyn was voted No. 1. When Hyolyn was asked for her vote, she adorably answered, “I picked one team as the ‘recruitment queen.’ It’s VIVIZ.”

Later, the dance units met with each of their choreographers, who are all dancers from “Street Woman Fighter.” Renaming themselves as “KEVIZ,” Kep1er’s Xiaoting, Hikaru, and Kim Da Yeon and VIVIZ’s Umji and SinB met up with HolyBang’s Hertz. Hyolyn and WJSN’s Eunseo and Yeoreum decided on the unit name “Ex-it” and began learning their choreography from team LaChica.

At the same time, Brave Girls’ Eunji along with LOONA’s Olivia Hye, Yves, Heejin, and Choerry showed up to practice with discouraged spirits. Despite their song being the least popular and LOONA’s last pick, the team cheered up after watching their incredible choreography demo.

When their dance teacher PROWDMON’s Monika arrived, she immediately began making the group stretch to prepare for the choreography. While the LOONA members struggled through the exercises, Brave Girls’ Eunji showcased her flexibility as she revealed that she had majored in contemporary dance. 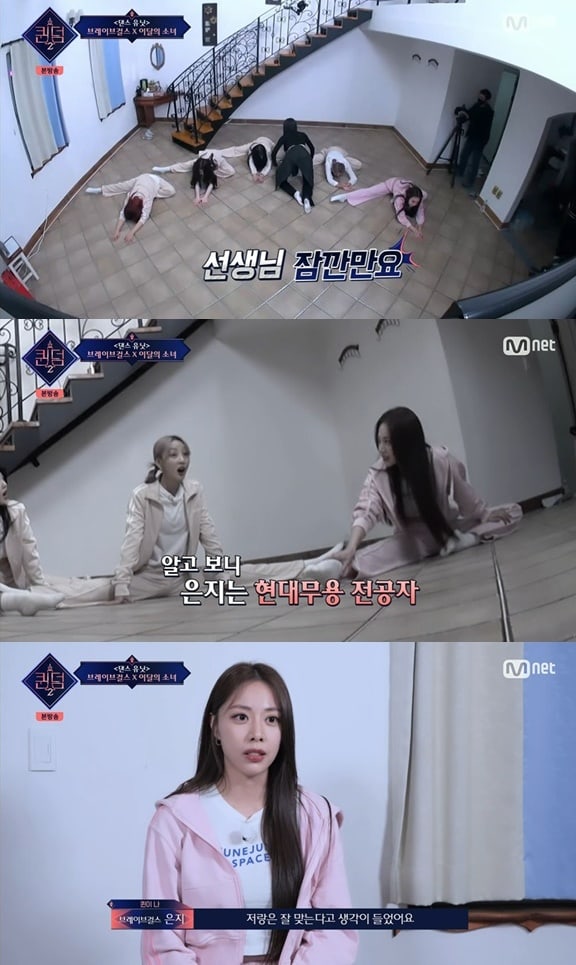 Once they began learning and practicing the difficult choreography, Monika remained sharp in her criticism as she commented, “I’m really sorry but I have over 10 years of teaching experience. To be honest, I can’t help but know how much determination you have just by looking at your gaze.”

After prompting the girls to pay attention, Monika added, “While I might be making a mistake if you’re just here to make an appearance, I’m not just here for that. It looks like you’re lacking concentration. Your body doesn’t want to do it. Focus. I have overwhelming pride in my job. I work with sincerity and I sincerely choreographed this piece.” 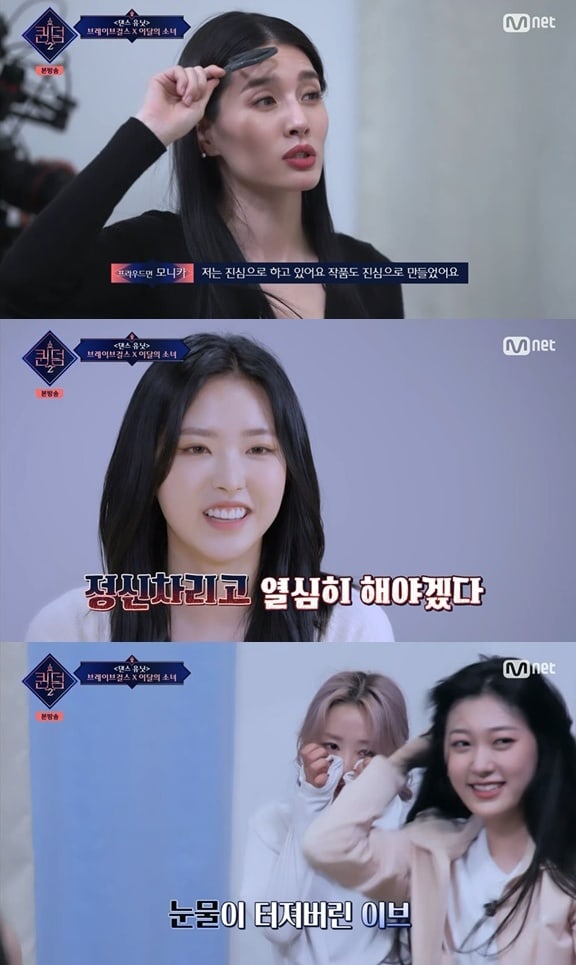 In an interview following their practice, Olivia Hye shared, “Even while receiving our lesson, I was in denial of [our song] ‘Tell Me Now.’ I couldn’t focus because I was thinking, ‘How did I end up here?’ After hearing Monika’s comments, I thought, ‘I have to focus and work hard.'”

Monika continued with her firm advice by encouraging the team to be the best, no matter what. After she left, multiple members burst into tears because they were touched by Monika’s sincerity. Heejin explained, “To be honest, she easily could’ve just done her lesson and left [without giving us advice].”

Yves shared, “I’m feeling this way for the first time in a long time. I wondered whether there was ever a time that someone led us so passionately to dream so big. It feels like I’ve returned to being a trainee.”

Before the dance units performed for their midway check, the results of last week’s vocal unit midway check were revealed. Placing first out of the three vocal teams was 33, the unit with Hyolyn and Brave Girls’ Minyoung.

Following the dance units midway checks, the “Tell Me Now” team was voted first place. Brave Girls’ Minyoung excitedly commented, “Our members are placing first for the first time!” Eunji added, “I was so, so happy. We’ve never said that we have to place first during the team battles, but [this time,] we have to place first.” 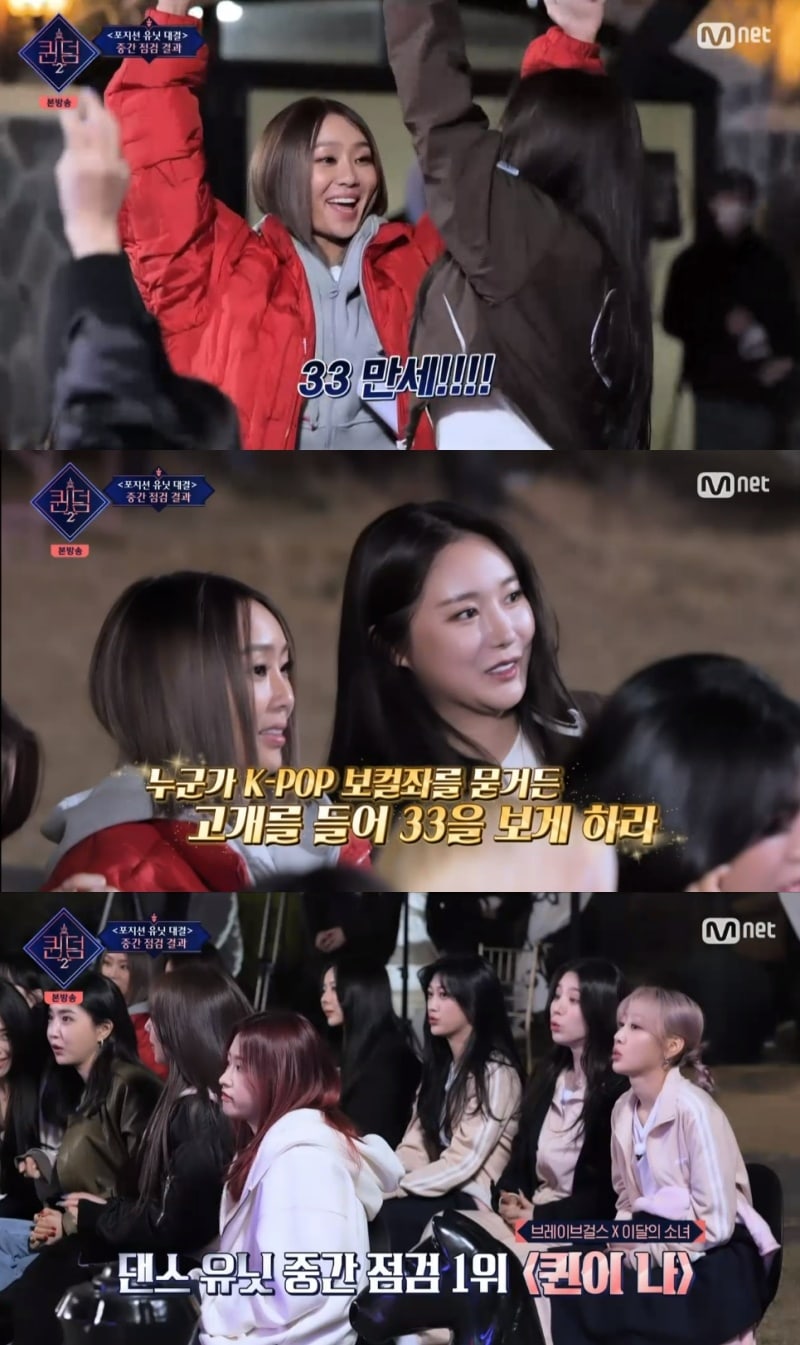 As the first place team, Hyolyn and Minyoung chose the setlist order for the vocal teams. They put LOONA and Kep1er’s team first, VIVIZ and WJSN next, then their team last. Eunji and the members of LOONA also got the opportunity to make the dance units’ setlist. They named KEVIZ first, followed by “Ex-it,” then their team.

Check out the final vocal unit performances from this week below!

“Queendom 2” airs on Thursdays at 9:20 p.m. KST and is available for live global streaming on Mnet’s YouTube channel.