BTOB’s Yook Sungjae has spoken about his acting career, thirties, and more with Arena Homme Plus!

Yook Sungjae is currently starring in MBC’s webtoon-based drama “The Golden Spoon” as Lee Seung Chun, a student born into a poor family who uses a magical golden spoon to swap fates with a friend born into a wealthy family.

Regarding his chemistry and synchronization with the character, Yook Sungjae revealed, “It was really difficult. When you live nearly six months immersed into one character, your original personality starts to follow it. While filming ‘The Golden Spoon,’ I lived as Seung Chun without a moment’s rest. As a result, I gradually became exhausted. I typically need to be able to relax and enjoy my free time. The more I do that, the happier and brighter I become as a person, but Seung Chun is the complete opposite of that.”

In the past, Yook Sungjae shared that he wanted to live life while going with the flow. He shared that he still believes in this mindset, commenting, “As human Yook Sungjae, it’s still a phrase I reflect on. No matter how much I worry, there are problems that won’t be solved, and things that don’t change no matter how much I try. That’s why if you’re happy, you accept that and live happily, and when you’re sad, you accept that and live sadly. That’s how you can cool your mind. Since I have an overthinking personality, there are times when I experience insomnia and my health worsens. That’s why these days, I try not to think too deeply.” 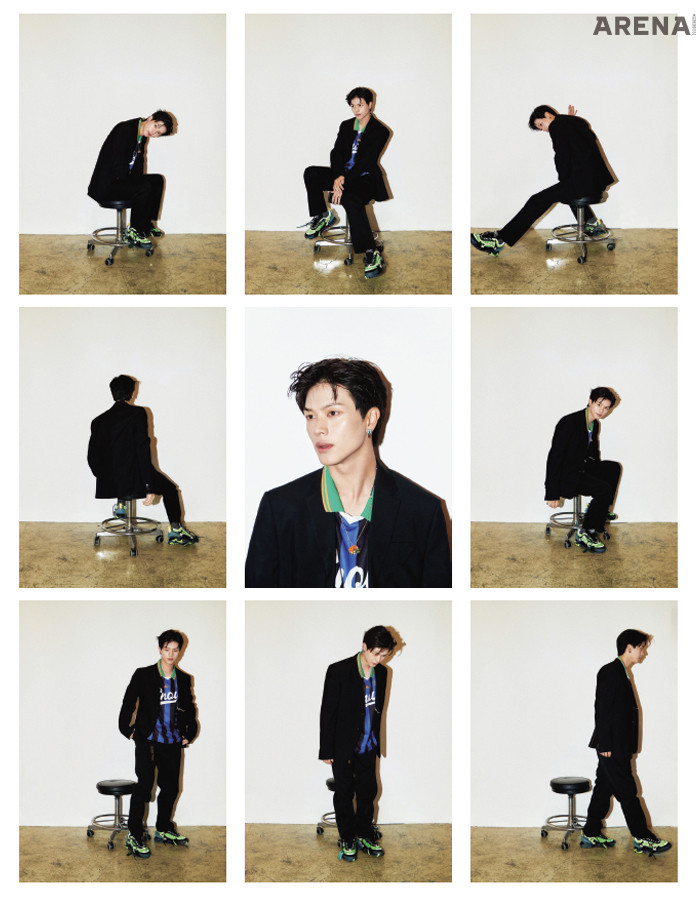 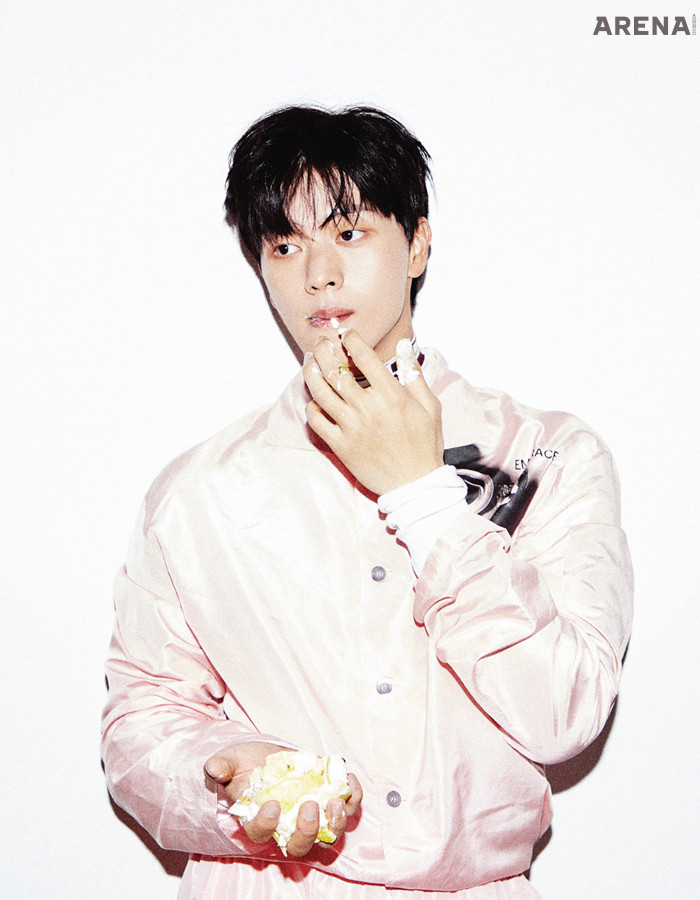 As Yook Sungjae has touched on his tendency to be risk-averse, he was asked how he began acting. “In 2015, I started naturally without knowing anything. To be honest, back then, I had a lot of confidence and certainty that I’d do well, no matter what I did. However, once I officially began my acting experience, I realized that I was someone who was lacking a lot. But when I pondered, practiced, and personally created scenes, I’d get positive feedback so that sense of joy was big.”

He continued, “It’s different from singing. Since I don’t compose or write lyrics, I have to convey a song’s meaning on stage. But with acting, I have to create the script’s narrative through my unique acting. A profession where I have to meticulously create through each and every action and tone fits my personality well. I believe that through acting, I feel the pain of creation that composers and lyricists feel. That pain is enjoyable.”

Given his admiration for acting, the interviewer inquired whether appearing in a large number of projects was Yook Sungjae’s dream. The word the interviewer used was “dajak” so Yook Sungjae playfully answered, “No, it’s not. Honestly, my dream is ‘dajik.'”

He explained that “dajik” is short for “diverse jobs,” which is his actual dream. Yook Sungjae elaborated, “I’ve walked the road of a singer and that’s unchanged even now. I’ve also taken on the road of an actor. I do enjoy variety too but I also want to try being a creator. A game creator. Ever since I was young, that was my second dream. If I start, I would dive in deep, and it’s work that I want to undertake professionally. I say this lightly now but in the future, it’s a job that I’d really like to seriously try out.” 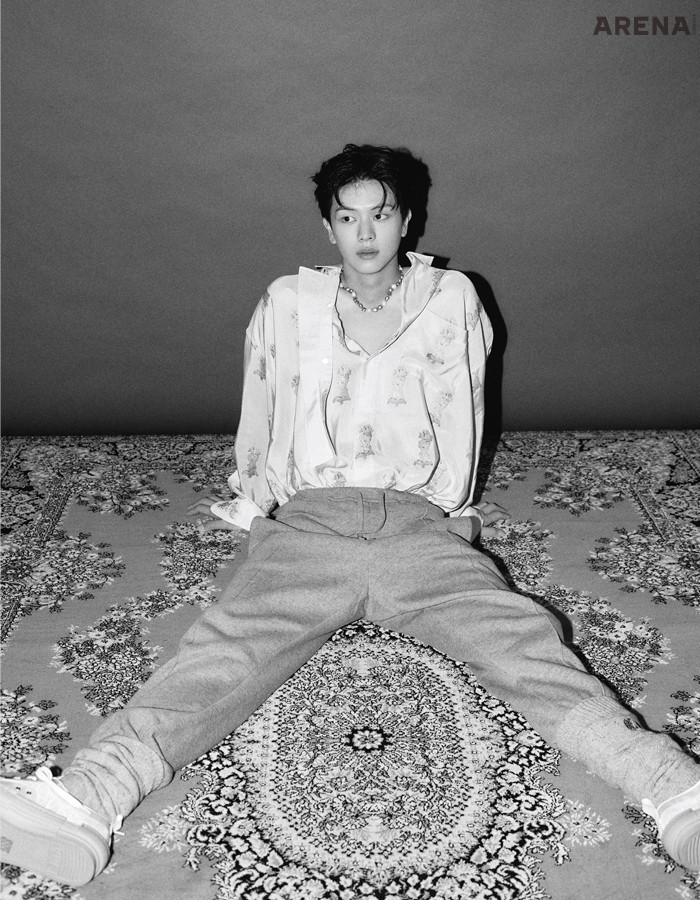 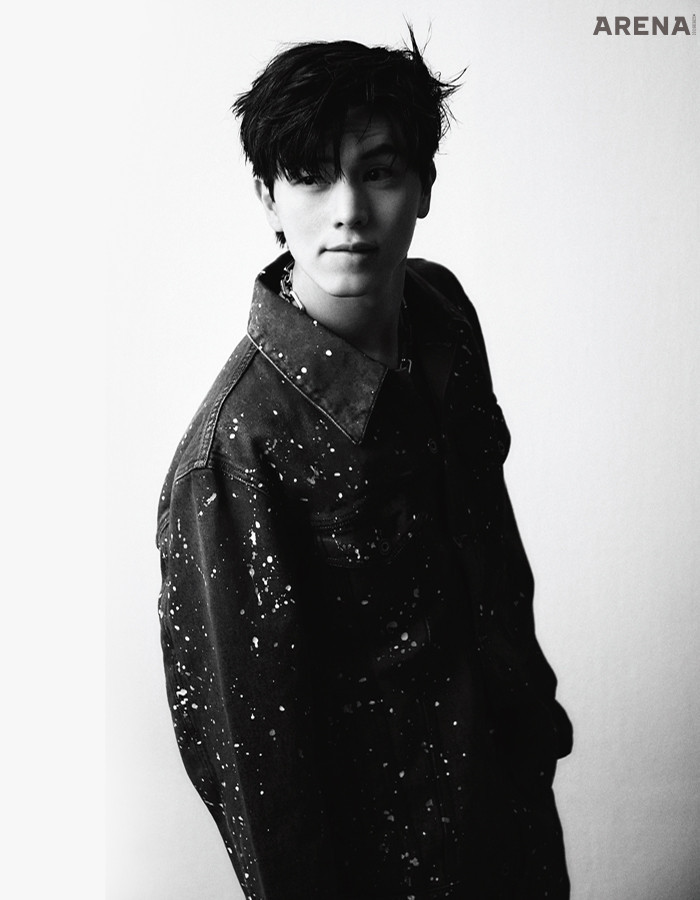 In an older interview, Yook Sungjae shared that he wanted to quickly become 30 years old. On how his thoughts have changed since then, Yook Sungjae commented, “I don’t have any regrets about the end of my 20s. I also don’t have any fears about my 30s. However, I wish I could be 29 years old for about three more years. There are still a lot of things I want to experience as a twenty something-year-old.”

He jokingly continued, “All my BTOB hyungs are in their 30s. But when I look at them, there isn’t anything specific that changed or made them cooler. If that’s the case, I figure that it’s better to at least be younger in age. I thought that when I turned 30, I’d become more serious and manly, but my hyungs are the same. So I romanticize it less. When I turn 30 in two years, I don’t think I’ll become cooler.”

On what type of actor he hopes to become, Yook Sungjae remarked, “I think it’s a bit generic to say that I want to become a successful actor, so I want to go to Hollywood. I want to act as a Marvel hero. One downside is that my English skills are lacking. But that factor is a big stumbling block. If I had sufficient time, I want to seriously study abroad. I’ve been promoting with BTOB’s foreign member Peniel for 11 years. But my English skills have not improved at all. They say that simply living abroad for a year is a method to improve your [language] skills. I really want to live just one year solely as Yook Sungjae, the study abroad student. Although that will likely be impossible.” 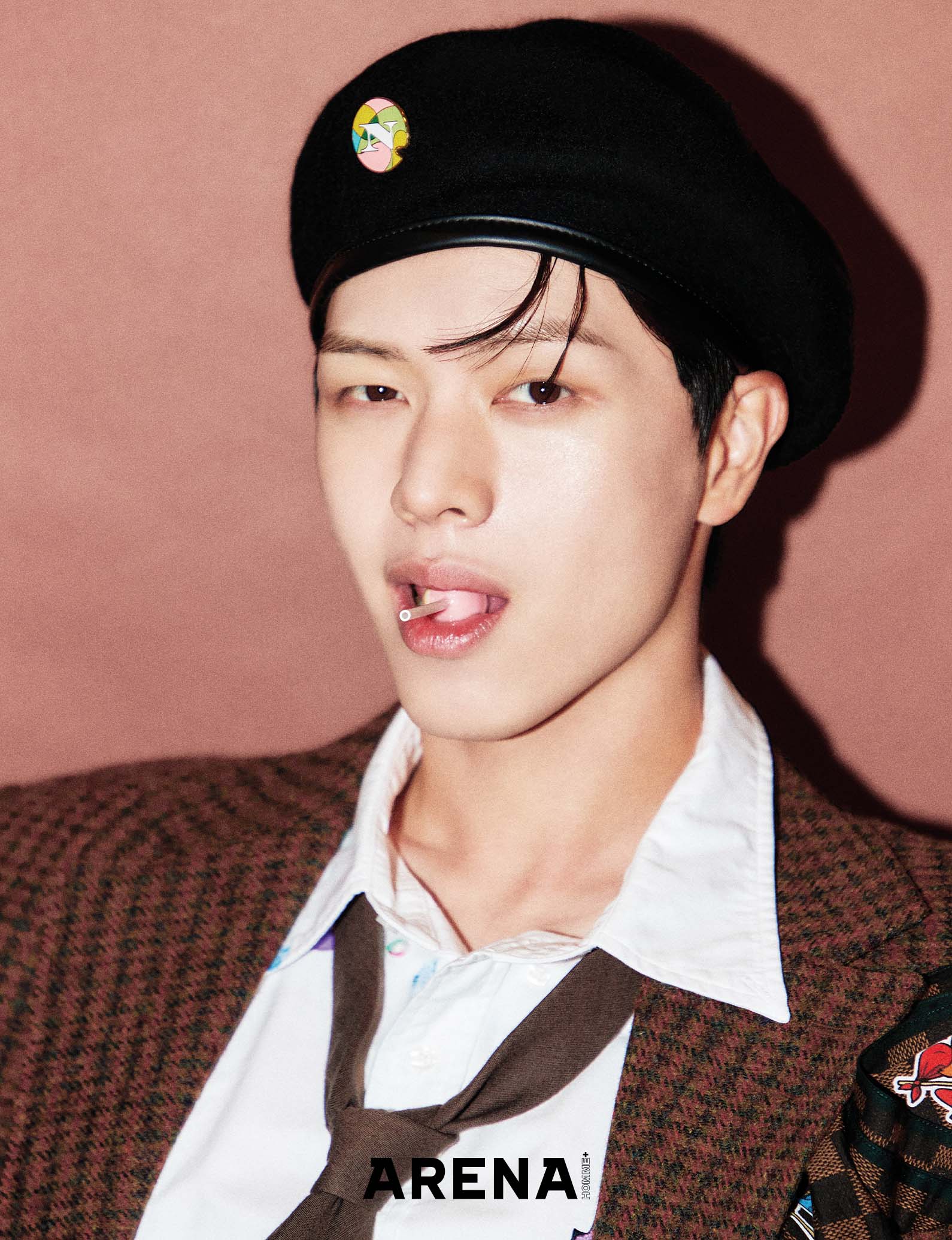 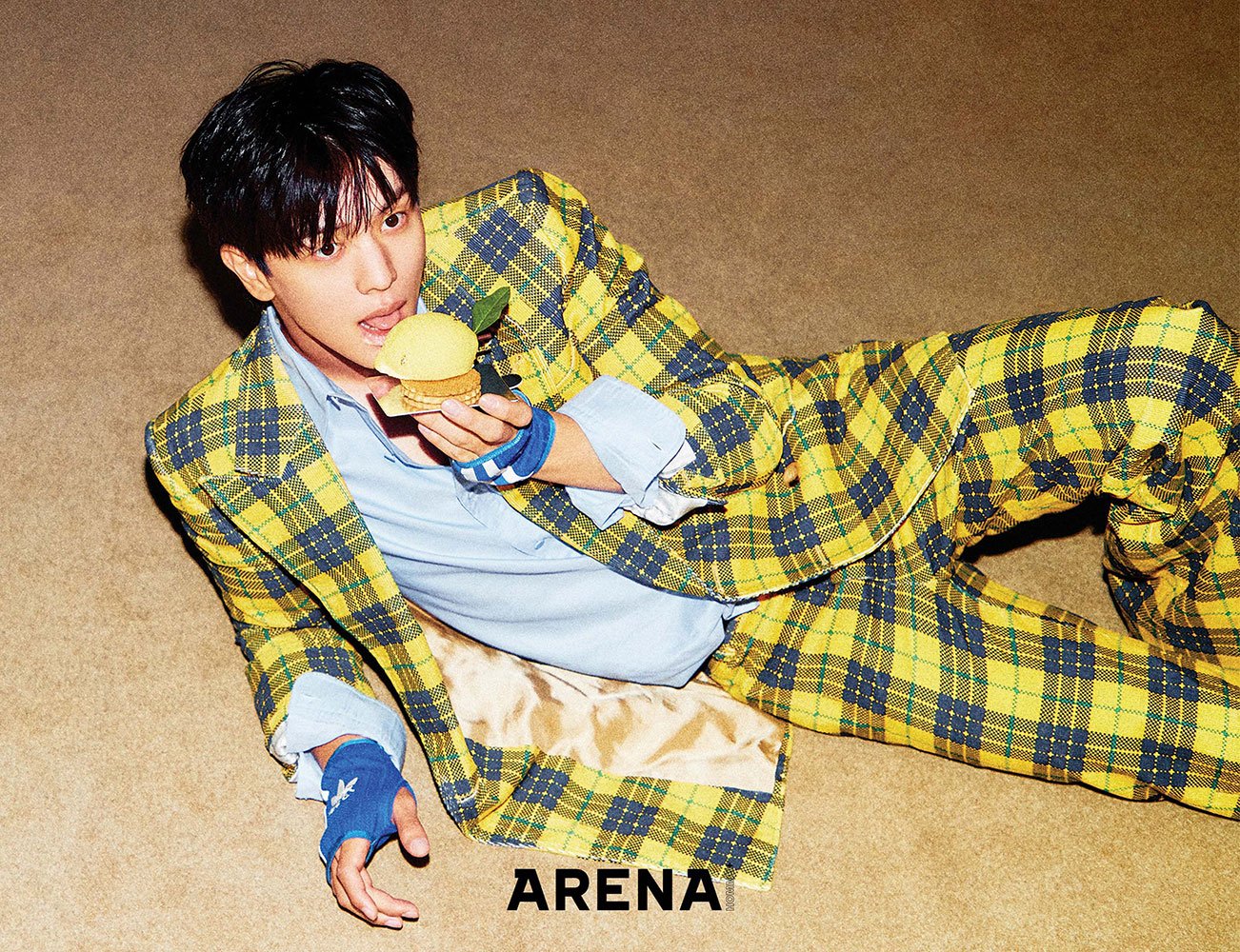 Finally, Yook Sungjae shared what he thinks is the most important value to uphold. He answered, “If your self-esteem disappears, you aren’t happy. I think that’s most important and up until now, I’ve lived while maintaining a high [self-esteem].”

On how this is affected in tough times, Yook Sungjae explained, “When a difficult moment comes, I develop an unyielding spirit and think, ‘I have to try.’ If I try and it’s too hard or I really can’t do it, then I’m quick to give up.” He elaborated on why giving up is necessary sometimes, saying, “I think, ‘it’s not working, I’ll try something else.’ Giving up is good, but rather than that, it’s turning in a new direction on a different road. For myself.”

You can see Yook Sungjae’s full interview and pictorial in the upcoming issue of Arena Homme Plus. His drama “The Golden Spoon” airs on Fridays and Saturdays at 9:50 p.m. KST.

In the meantime, watch Yook Sungjae in “The Village Achiara’s Secret” below!

BTOB
Yook Sungjae
Arena Homme Plus
How does this article make you feel?