Circle Chart (formerly known as Gaon Chart) has revealed its chart rankings for the week of December 25 to 31!

This week’s album chart was dominated by new releases, starting with ATEEZ coming in at both No. 1 and No. 2! Their latest album “SPIN OFF : FROM THE WITNESS” took the top two spots on the album chart with its original and POCA versions.

Red Velvet’s “The ReVe Festival 2022 – Birthday” maintained its position at No. 3, while SMTOWN’s new agency-wide winter album “2022 Winter SMTOWN : SMCU PALACE” debuted at No. 4. In No. 5 was WayV’s new mini album “Phantom.” 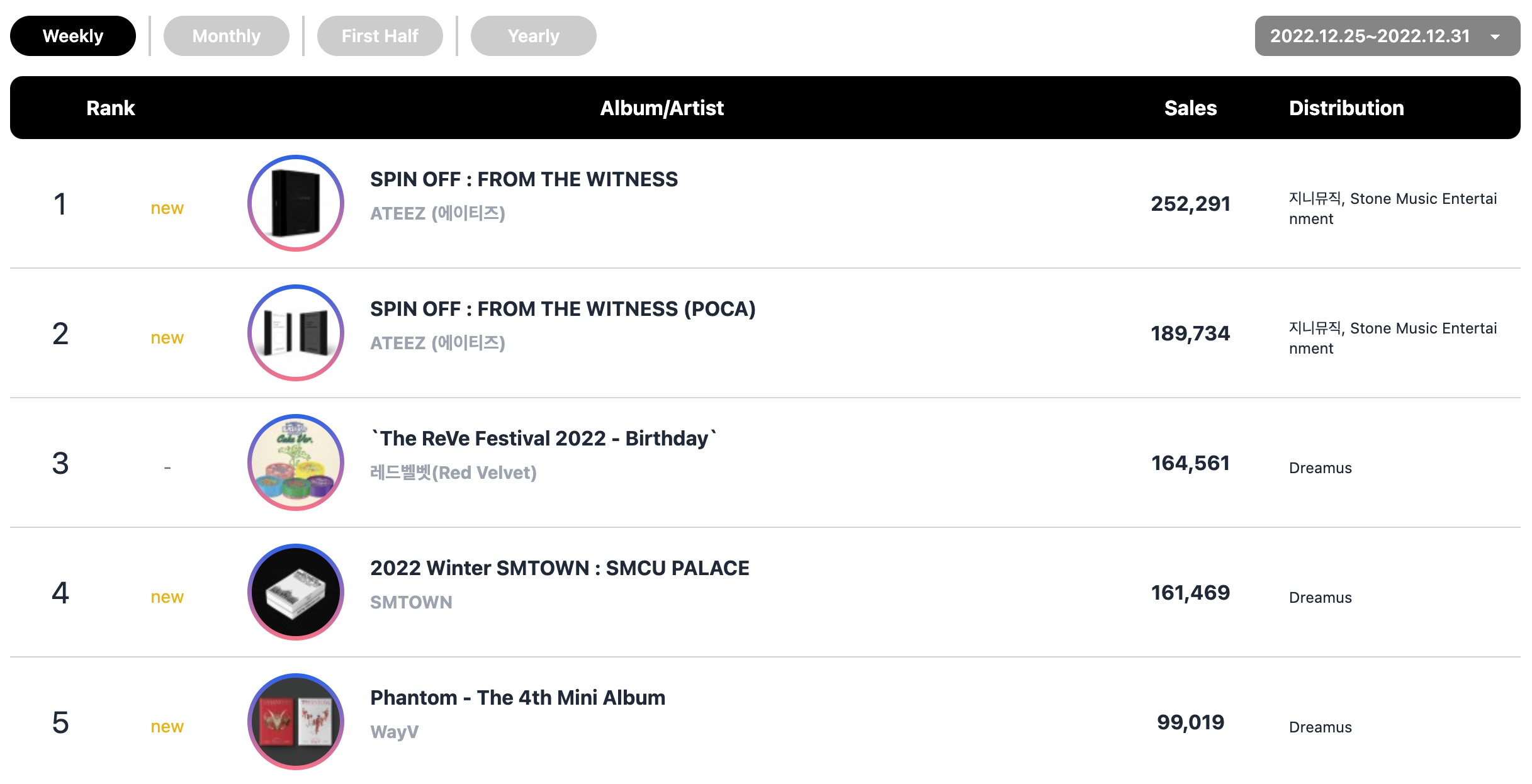 Lim Young Woong’s “London Boy” and “Polaroid” stayed strong on Circle’s download chart, with both songs rising to take over the top two spots this week. 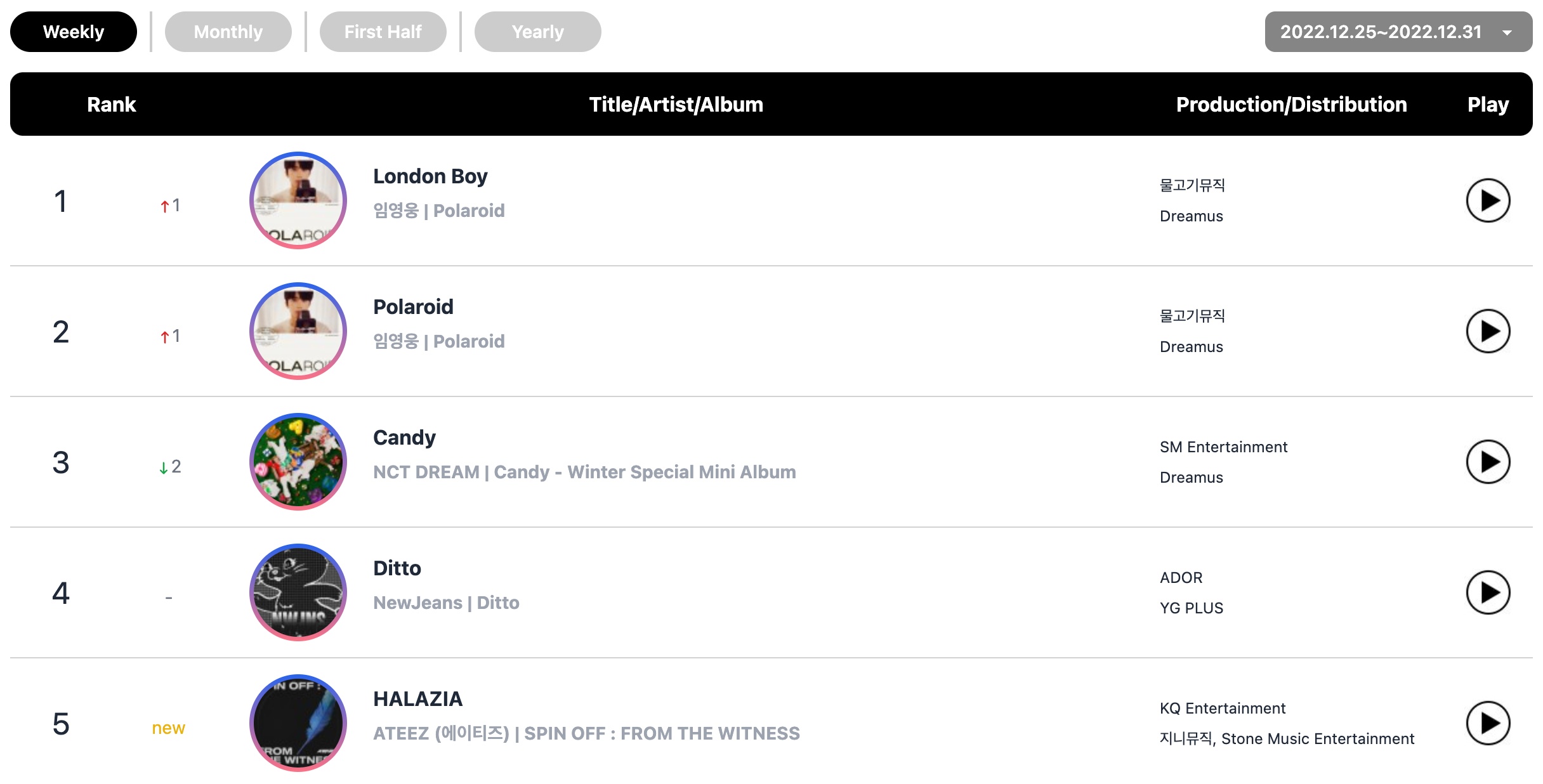 With their pre-release track “Ditto,” NewJeans has earned a triple crown on this week’s Circle charts!

On the digital and Global K-Pop charts, NewJeans’ “Ditto” held on to the top spot while it rose to No. 1 on the streaming chart. Maintaining a second place rank on the digital chart was “Event Horizon” by Younha.

NewJeans made their second appearance on the chart with “Hype Boy” at No. 3 and NCT DREAM’s “Candy” came in at No. 4. Rounding out the list was Lee Young Ji’s hit “Show Me The Money 11” song “NOT SORRY” (featuring pH-1 and produced by Slom). 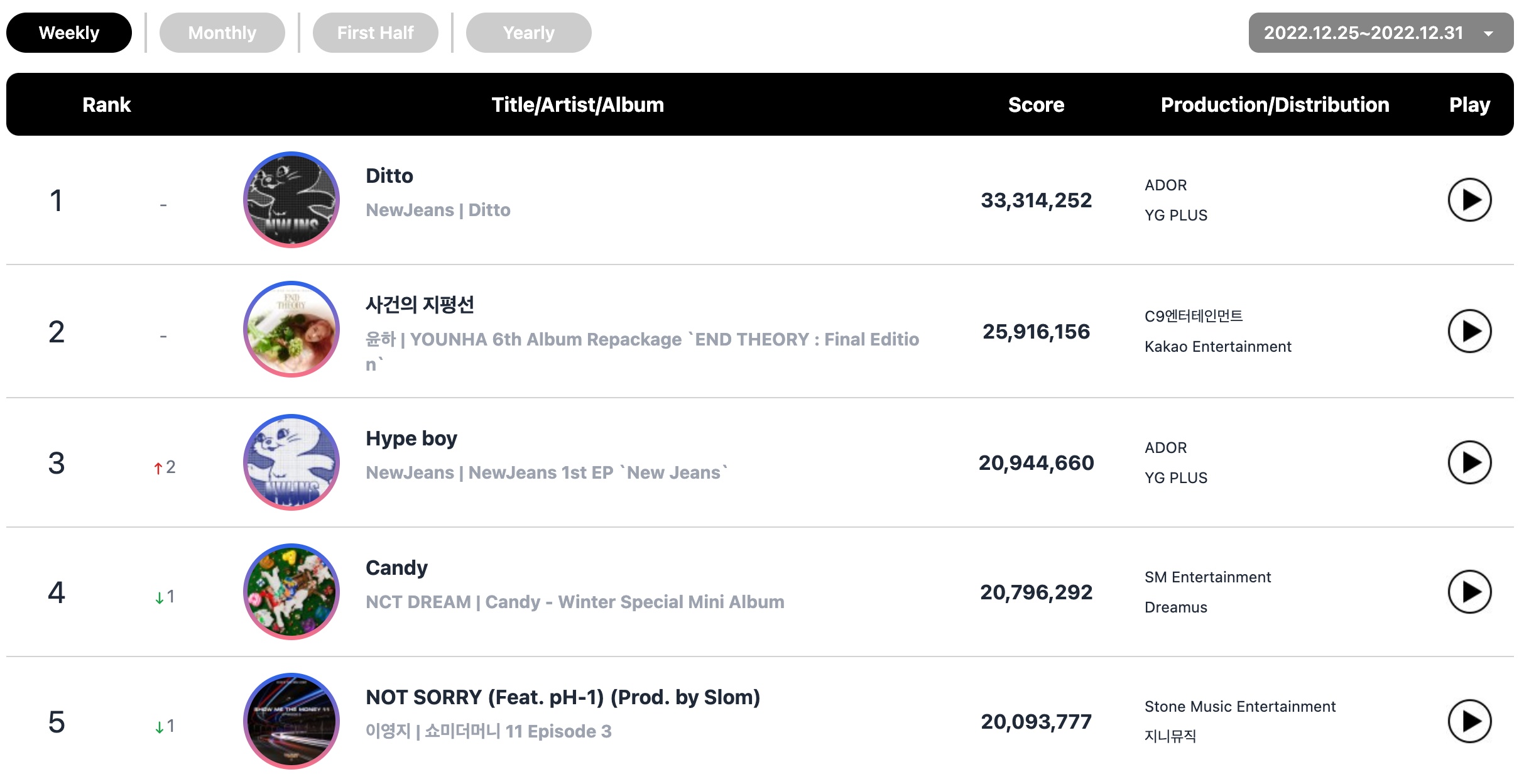 Just like last week, this week’s streaming chart featured the same five songs as the digital chart, but in a slightly different order.

The top three spots were the same as the digital chart, with “Ditto” in No. 1 followed by “Event Horizon” and “Hype Boy.” In No. 4 was Lee Young Ji’s “NOT SORRY” and NCT DREAM’s “Candy” kept its position at No. 5. 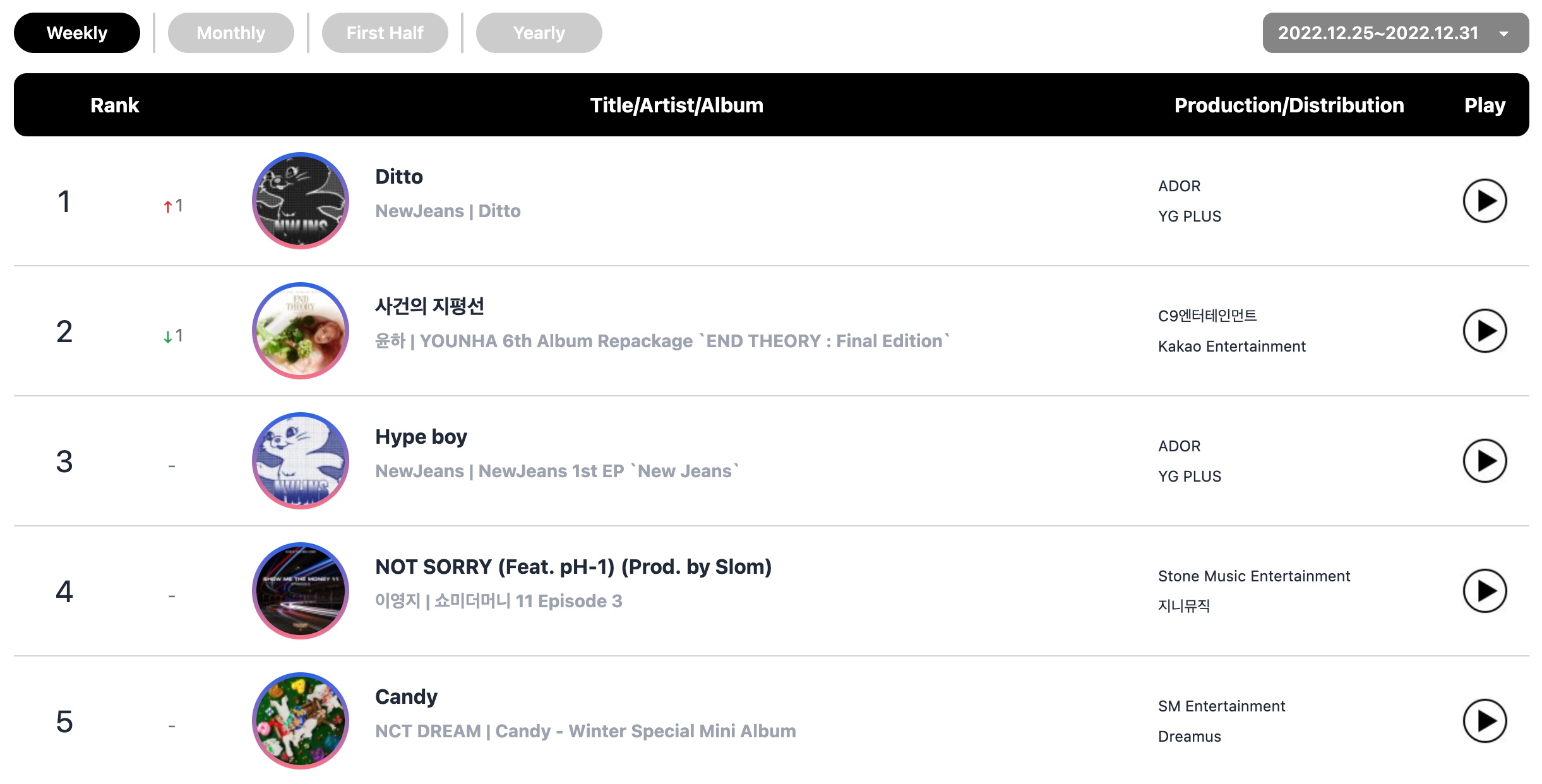 The final part of NewJeans’ triple crown this week was on the Global K-Pop chart!

This week’s chart essentially stayed the same as last week. In No. 1 was “Ditto” by NewJeans, followed by “ANTIFRAGILE” by LE SSERAFIM.” NewJeans’ “Hype Boy” stayed strong at No. 3 and “Shut Down” by BLACKPINK kept its spot at No. 4. Lastly, IVE’s “After LIKE” rose one position to land in No. 5. 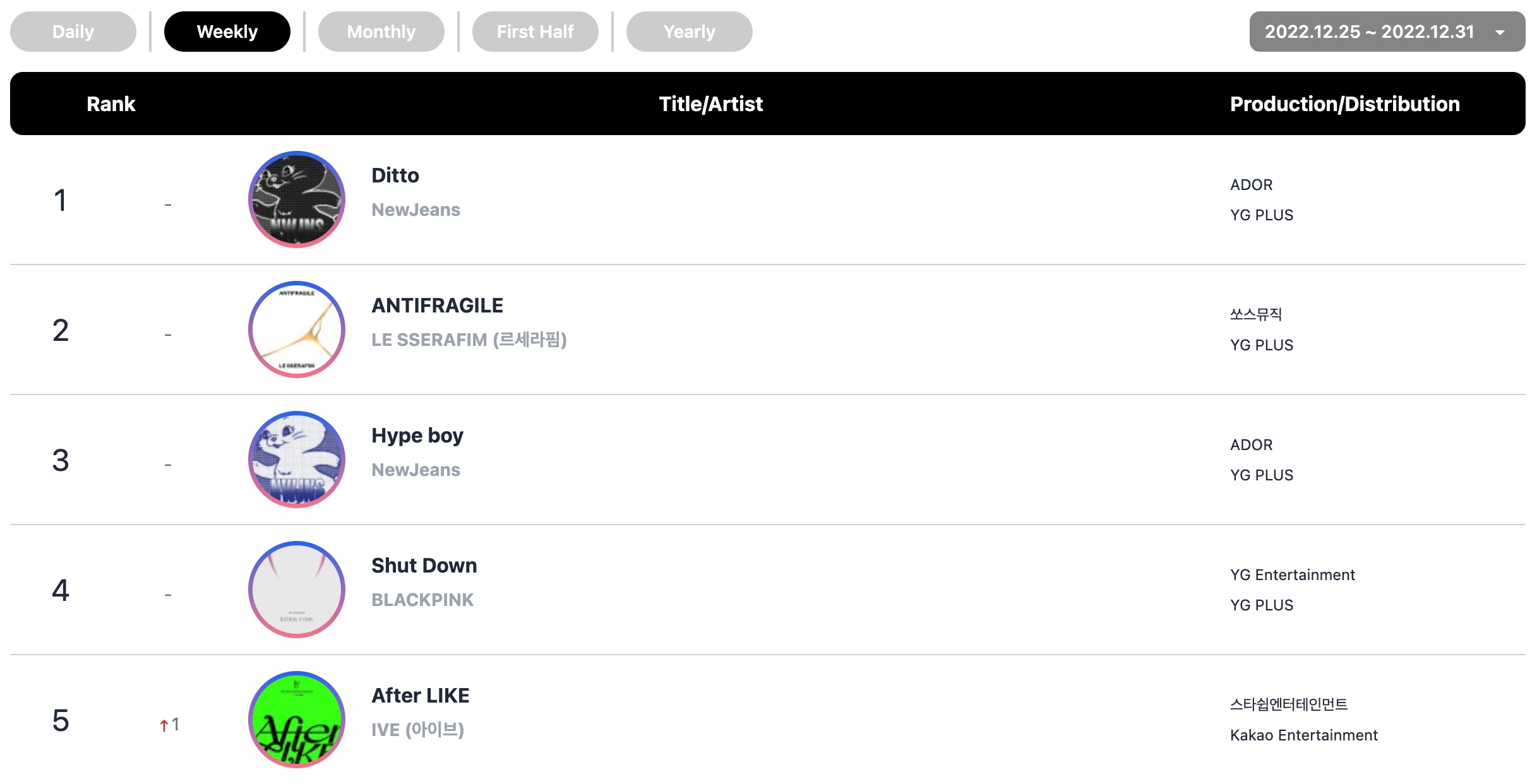 There were no changes on Circle’s latest social chart, with BLACKPINK claiming the top spot once again. They were followed by BTS, NewJeans, Choi Yu Ree, and Stray Kids. 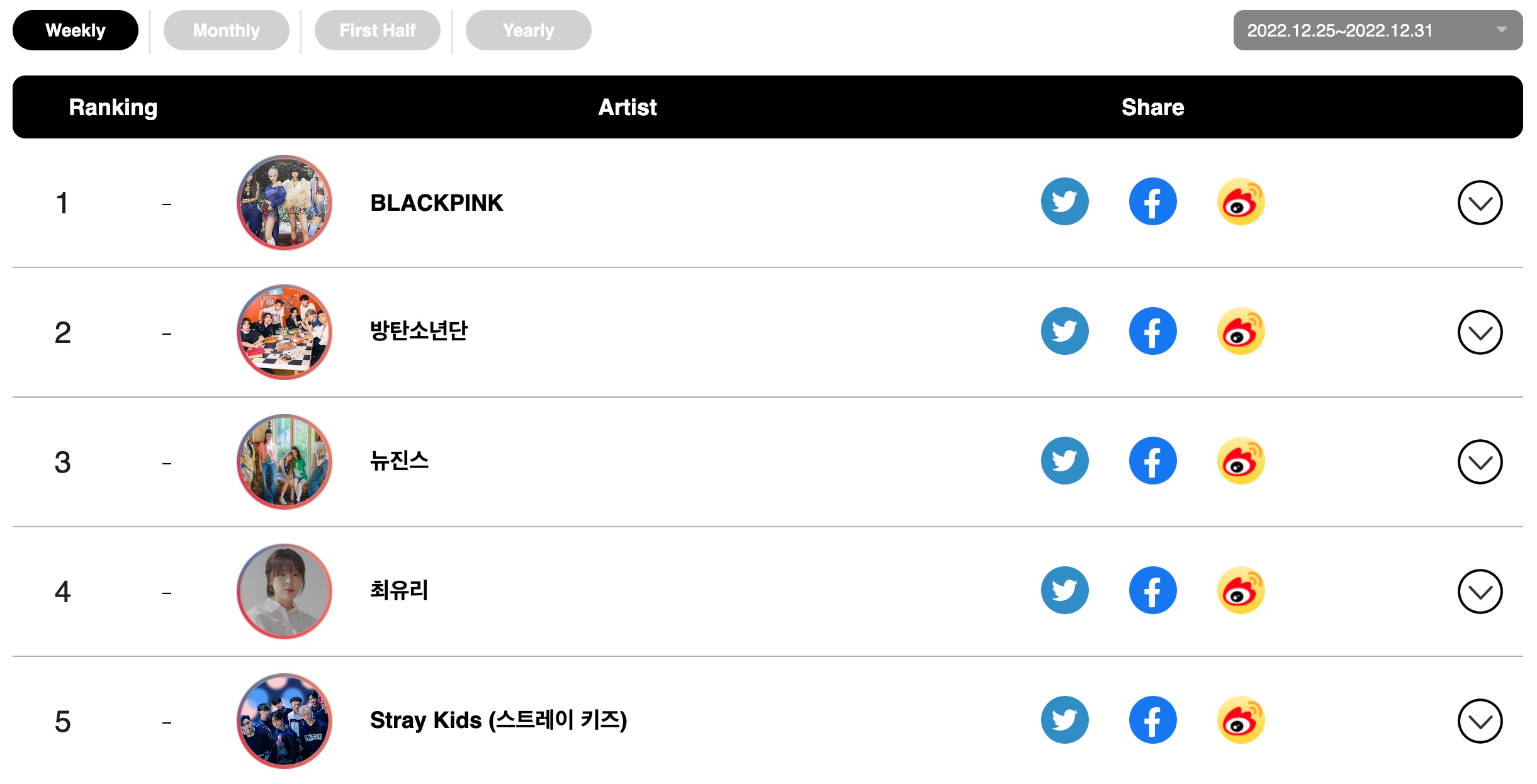