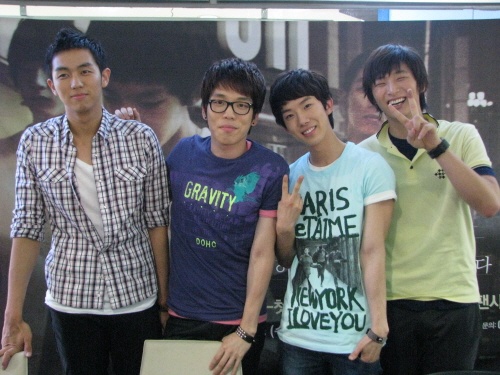 2AM Is The Next Group To Become F4

2AM members Jung Jinwoon, Im Seulong, Lee Changmin and Jo Kwon, are set to don the roles of the fabled F4 group from the insanely popular drama “Boys Over Flowers”. The boy group will take the roles in a parody on “Sunday Night Drama Parody Theatre” which is set to air sometime in November.

While it might have been expected that Jo Kwon would have been one of the F4 boys, it has been revealed that he will be taking a different role because of his “liveliness”. However, it has also been hinted while he may not be one of the F4 boys; he will have more lines then any other member.

This is also means that group will be joining a list of groups, which includes the likes of Big Bang and others, that have parodied the drama.

Jeong Jinwoon
2AM
F4
Jokwon
Seulong
How does this article make you feel?