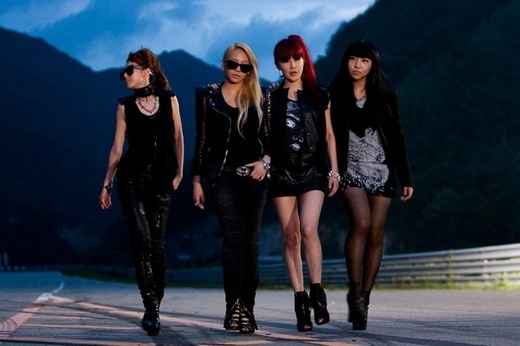 Music+Lyrics: e.knock
Album: 2NE1 Vol. 1 Track 3 Purchase this album
Watch: MV Live Performance
Comment: As expected, 2NE1’s “Clap Your Hands” rises to the top spot in just its second week on the chart. This song is from their first full studio album “To Anyone”. The girls did well last year with their powerful charisma on stage and their showy fashion sense. 2NE1 will have three title tracks – “Can’t Nobody,” “Go Away,” and “Clap Your Hands” – that will be performed simultaneously for promotions, probably a first in Korean music that an album have three different title songs. Top producers, Teddy, e.knock, choice37, and PK among others have participated in the album to bring out strong hip-hop beats, R&B, as well as reggae.

Music: Kim Do Hoon, Lee Seung Ho / Lyrics: Kim Do Hoon, Lee Seung Ho, Mario
Album: FT Island mini-album “Beautiful Journey” Track 1 Purchase this album
Watch: MV Live Performance
Comment: After spending two weeks on top, FT Island falls back to No. 2 this week with “Love Love Love”. This is the title song from their second mini album “Beautiful Journey.” The band had been quite busy the past months with their Japanese activities. The new album includes five new tracks, with “Love Love Love” being the title track. The album follows the concept of going on vacation as shown through the album jacket and 24-page photo booklet. “Love Love Love” is a mid-tempo pop rock song that fans will fall in love with immediately.

Music: Kim Do Hoon / Lyrics: Wheesung
Album: Wheesung mini-album “Realslow Is Back” Track 1 Purchase this album
Watch: MV Live Performance
Comment: Multi-talented artist Wheesung, who’s capable of working with all sorts of genres – ballad, R&B, dance, rock, and so forth, returns after ten months with a new single album, “Real Slow is Back.” It includes title track “Even Thought of Marriage” and newly arranged versions of “Rose” and “Love, That Bad Disease” – songs that were included in his sixth album. “Even Thought of Marriage” is a powerful R&B dance number composed by renowned composed Kim Do Hoon and penned by Wheesung himself. It has strong sounds backed up with the artist’s solid vocals. The song is about a man who feels sad and pathetic when a lover he even decide to marry, leaves him. This week it drops one spot to No. 3.

Music:  Min Myung Ki / Lyrics: Min Myung Ki, Do Hee Sun
Album: Gavy NJ digital single “Let’s End It” Track 1
Watch: MV Live Performance
Comment:  Gavy NJ, who debuted in 2005, releases a digital single titled, “Let’s End It,” composed and penned by Min Myung Ki who wrote all of the group’s top hits. The song initially starts off with sad violin arrangements followed by guitar and piano playing. The electronic sounds soon come forth along with the girls’ unique vocals. The song holds sad lyrics about reminiscing one’s past love life, only to realize that all that’s left is breakup. This week it rises nine more spots into the top 5 at No. 4.

Music+Lyrics: Kang Ji Won, Kim Ki Bum
Album: Secret mini-album Vol. 2 Track 1 Purchase this album
Watch: MV Live Performance
Comment: This is the title track of Secret’s 2nd mini album with the same title, ‘Madonna.’ It is a song with a message for girls to become an icon like Madonna and live confidently and proudly. Although it is an electronic pop dance song, the synth sounds are minimal. The participation of TST, a brass band, as a session musicians perfected the song. (credits to Arirang TV – Pops In Seoul)

Music+Lyrics: Brave Brothers
Album: Sistar mini-album “Shady” Girl Track 2 Purchase this album
Watch: MV Live Performance
Comment: Rookie group, Sistar, makes its comeback with its second single album. The title track is “Shady Girl,” a dance number with strong hip-hop beats and lyrics. It was composed by the Brave Brothers and produced by world renowned producer Eliot Kennedy, upgrading the song a notch. The song holds lyrics about how a girl may seem a bit “shady” in front of a lover, but it’s because they want to look nice for him. Despite not getting as much attention as other rookie artists, Sistar has been doing very well on the chart and both of their songs made the top 5.

Music: Yoon Gun Hyung / Lyrics: Psy, Lee Ha Neul
Album: DJ DOC Vol. 7 Track 2 Purchase this album
Watch: MV Live Performance
Comment: This is the title track of DJ D.O.C’s 7th studio album, ‘Satire.’ It is a fun and upbeat song with Psy and Lee Ha-neul’s straightforward and rebellious yet funny lyrics with electronic beats. The chorus, where they shout ‘that’s just me’ like the rebellious group they are famous as, is highly addictive. (credits to Arirang TV – Pops In Seoul)

Music+Lyrics: Bang Shi Hyuk
Album: Lim Jung Hee mini-album “It Can’t Be Real” Track 3 Purchase this album
Watch: MV Live Perf
Comment: Diva Lim Jeong Hee and Jo Kwon meet for duet number, “Road to Breakup” in midst of the singer’s comeback mini album, “It Can’t be Real” due on September 30th. The song holds a special meaning because it’s a collaboration between former vocal teacher (Lim) and student (Jo) and also because Jo Kwon had always wanted to sing a duet with her. The song was composed by top producer, Bang Shi Hyuk (hitman bang), making it all the more anticipated. This week it debuts at No. 15.

Music+Lyrics: Han Sang Won
Album: V.O.S Special mini-album “The Blue Bird” Track 3 Purchase this album
Watch: MV Live Performance
Comment: V.O.S returns after a year with part one of their special mini album titled, “The Blue Bird.” The group took part in producing the album, taking one step further as musicians. The title track is “Full Story,” an emotional ballad composed by hit maker, Han Sang Won. The two members of V.O.S also took part in creating this number. V.O.S’s soft yet strong vocals are apparent in this Korean style emotional ballad.  This week it is our biggest mover, up 28 spots to No. 17.

Music +Lyrics: E-Tribe
Album: 4Men + E-Tribe mini-album “You” Track 1 Purchase this album
Watch: MV Teaser Live Performance
Comment: R&B group 4Men has teamed up with E-Tribe – the formidable composer-producer duo behind hits like Girls’ Generation’s “Gee”, Lee Hyo Ri’s “U-Go-Girl”, and Super Junior’s “It’s You” – for the special mini-album You. This project album came about because of E-Tribe’s admiration for 4Men lead vocal Shin Young Jae’s voice. 4Men had a breakthrough hit earlier this year with “Can’t Do”. “U” is another pure R&B song that we don’t see often in K-Pop these days. “U” drops six spots to No. 18 this week.

Album: Chae Dong Ha mini-album “D Day” Track 2 Purchase this album
Watch: MV Live Performance
Comment:  Almost a year after his solo debut album, former SG Wannabe member Chae Dong Ha is releasing the mini-album D day. Chae traveled all the way to India and Nepal to find inspiration for the album, for which he composed and produced. Going against the current K-pop trend, D-day eschews digital and electronic sounds for strings and acoustic. The album comes with four new songs including the main track Haruga Michigo, whose music video co-stars Chuno’s Yoon Joo Hee. This week it debuts at No. 20.

Comment: Blue Fish is a project album that focuses on composer, Pil Seung Bulpae (real name Jung Pil Seung). The title track is “Hurt to the Extent of Death” which is a song co-composed by Pilseung Bulpae and hit maker Kim Du Hun. The number features the vocals of 2NB and 1sagain. Both artists had worked with the composer before, making it a perfect track for them. 2NB’s sad vocals flow well with 1sagain’s appealing rap in this medium tempo number. (credits to motoway065 for translations)

Comment: Kim Gun Mo was born in 1968 and he debuted into the Korean music scene in 1992. Ever since, he has released 12 albums with many success. He is very famous for audience of all ages and is one of the few stars to have sold over 1 million records. Wrongful meeting is from his third album in 1995 and is one of his most famous songs and one fo the top hit songs of the 1990s. The song is about how their lover cheated on them with their best friend and is a classic dance song. This song was also remade by Ayumi from Sugar. (credits to ~S2~)