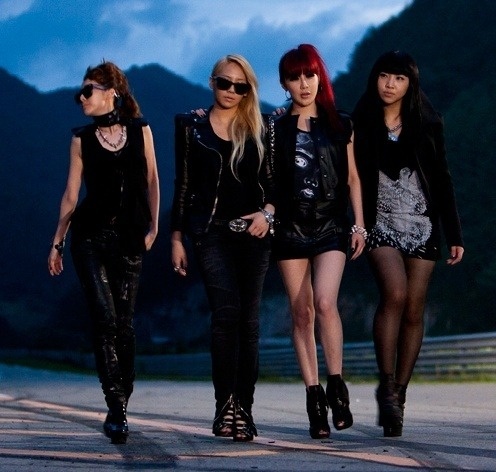 Artist of the Month- 2NE1

This week’s Soompi featured artist is 2NE1. This four-member female group had gained a lot of attention from before their official debut. Trained under Yang Hyun-seok, president of YG Entertainment, 2NE1 is comprised of four very talented ladies. Most of the members are fluent in foreign languages and exceptional in singing and dancing, so much so that they were nicknamed “the female Big Bang”.

They made their explosive debut on March of 2009 with “Lollipop” featuring their label mates Big Bang. They soon released their single “Fire” in May which was followed by “I Don’t Care” in July. They took the K-Pop industry by storm through their music, but also their unique style.

Their songs started topping the major music charts. They won three Cyworld Digital Music Awards with their songs “Lollipop” and “Fire”. After debuting on the various music shows, they won Mutizen awards on a popular music performance show about a few weeks . They started appearing on commercials and represented Korea at the 6th Asia Song Festival in September of 2009. There, they also received the Asian Newcomer’s Award.

After a whirlwind of success, the girls laid low for about a year. During this time, there was news that they traveled to Los Angeles to meet up with singer/producer Will.i.am from the Black Eyed Peas. After seeing a 2NE1 music video, Will.i.am was so taken by the girls’ talents that he said he wanted to work with them. They produced ten English songs together during the summer of 2010, which were then set aside for a tentative 2011 release in the US.

The reason why the songs weren’t released right away was because the group was focusing on their Korean comeback. They released their first official album in September of 2010 with an unprecedented three title songs. They were able to perform all three on their first comeback stage on a popular music performance show. However, this was met with mixed reviews as some enjoyed the longer exposure time of the girls, while others felt that the 11+ minutes allotted for just 2NE1 alone wasn’t fair for other groups who were only allowed to perform one to two songs.

YG Entertainment revealed tentative plans for the girls to focus on making a successful comeback in Korea, and then soon debuting in the US as well as Japan.

2NE1 is finally back with their first full studio album “To Anyone”. The girls did well last year with their powerful charisma on stage and their showy fashion sense. 2NE1 will have three title tracks – “Can’t Nobody,” “Go Away,” and “Clap Your Hands” – that will be performed simultaneously for promotions, probably a first in Korean music that an album have three different title songs. Top producers, Teddy, e.knock, choice37, and PK among others have participated in the album to bring out strong hip-hop beats, R&B, as well as reggae.

WATCH THIS
Clap Your Hands