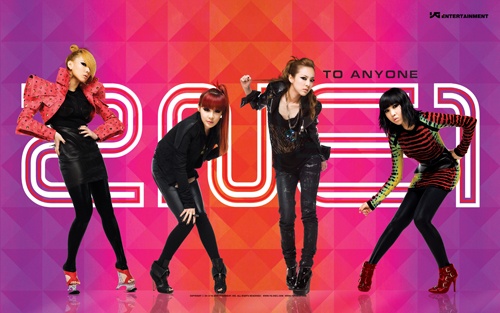 Music+Lyrics: e.knock
Album: 2NE1 Vol. 1 Track 3 Purchase this album
Watch: MV Live Performance
Comment: 2NE1’s “Clap Your Hands” remains No. 1 for the second week. This song is from their first full studio album “To Anyone”. The girls did well last year with their powerful charisma on stage and their showy fashion sense. 2NE1 will have three title tracks – “Can’t Nobody,” “Go Away,” and “Clap Your Hands” – that will be performed simultaneously for promotions, probably a first in Korean music that an album have three different title songs. Top producers, Teddy, e.knock, choice37, and PK among others have participated in the album to bring out strong hip-hop beats, R&B, as well as reggae.

Music: Kim Do Hoon / Lyrics: Wheesung
Album: Wheesung mini-album “Realslow Is Back” Track 1 Purchase this album
Watch: MV Live Performance
Comment: Multi-talented artist Wheesung, who’s capable of working with all sorts of genres – ballad, R&B, dance, rock, and so forth, returns after ten months with a new single album, “Real Slow is Back.” It includes title track “Even Thought of Marriage” and newly arranged versions of “Rose” and “Love, That Bad Disease” – songs that were included in his sixth album. “Even Thought of Marriage” is a powerful R&B dance number composed by renowned composed Kim Do Hoon and penned by Wheesung himself. It has strong sounds backed up with the artist’s solid vocals. The song is about a man who feels sad and pathetic when a lover he even decide to marry, leaves him. This week it rises to No. 2 again.

Music:  Min Myung Ki / Lyrics: Min Myung Ki, Do Hee Sun
Album: Gavy NJ digital single “Let’s End It” Track 1
Watch: MV Live Performance
Comment:  Gavy NJ, who debuted in 2005, releases a digital single titled, “Let’s End It,” composed and penned by Min Myung Ki who wrote all of the group’s top hits. The song initially starts off with sad violin arrangements followed by guitar and piano playing. The electronic sounds soon come forth along with the girls’ unique vocals. The song holds sad lyrics about reminiscing one’s past love life, only to realize that all that’s left is breakup. This week it remains at No. 4.

Music: Rhymer, Masterkey / Lyrics: Rhymer
Album: Miss $ digital single “Miss Independent” Track 1
Watch: MV Live Performance
Comment: Miss $ returns more mature both music and artist-wise with a new digital single titled, “Miss Independent.” Korea’s hip-hop “big daddy, Rhymer produced the entire album, helping bring out Miss $’s colors. The title track is “What Did You Do At This Age,” a medium tempo hip-hop number with lyrics about not knowing love even at an older age. Jung Seul Gi’s vocal featuring helps bring out the sad mood of the song. This week it is still at No. 5.

Music+Lyrics: Kang Ji Won, Kim Ki Bum
Album: Secret mini-album Vol. 2 Track 1 Purchase this album
Watch: MV Live Performance
Comment: This is the title track of Secret’s 2nd mini album with the same title, ‘Madonna.’ It is a song with a message for girls to become an icon like Madonna and live confidently and proudly. Although it is an electronic pop dance song, the synth sounds are minimal. The participation of TST, a brass band, as a session musicians perfected the song. (credits to Arirang TV – Pops In Seoul)

Music+Lyrics: Choi Yong Chan
Album: KBS Drama “Sung Kyun Kwan Scandal” OST Track 2  Purchase this album
Listen To: Full Song
Comment:  TVXQ’s Micky Yoo Chun makes his Korean drama debut in the highly anticipated KBS period drama Sung Kyun Kwan Scandal. Based on a novel by Jung Eun Gwol, Yoo Chun plays a stubborn, stickler student from a powerful and influential family who goes against his privileged background to seek education and equality, but he still has much to learn about how the world really runs. With Yoo Chun as the leading man, TVXQ bandmates Jun Su and Jae Joong have also joined the soundtrack. The JYJ trio return to K-pop with the drama song “Found It”, a lovely ballad that is very different from previous TVXQ songs. This week it moves up 16 spots to No. 8.

Music: Kim Bo Min, The Name / Lyrics: The Name
Album: Oh Jong Hyuk digital single OJ Track 1
Watch: MV Live Performance
Comment: Ex Click B member Oh Jong Hyuk (OJ) is back after one year with a new digital single album. The title song “Heart Is Racing” is a powerful ballad and this week it is our biggest mover, up 20 spots into the top 10. This song is receiving good airplays in Korea, which contributes a large part to its score.

Music+Lyrics: Brave Brothers
Album: Sistar mini-album “Shady” Girl Track 2 Purchase this album
Watch: MV Live Performance
Comment: This is the title track of Sistar’s 2nd single album, ‘Shady Girl.’ It is a pop dance song with intense hip hop beats. It’s about how a girl wants to look pretty in the eyes of a guy she loves even if she has to act a little pretentious. You can enjoy the upbeat melody and Sistar’s transformation into sophisticated and feminine ladies with the 50’s minimal look. (credits to Arirang TV – Pops In Seoul)

Album: Chae Dong Ha mini-album “D Day” Track 2 Purchase this album
Watch: MV Live Performance
Comment:  Almost a year after his solo debut album, former SG Wannabe member Chae Dong Ha is releasing the mini-album D day. Chae traveled all the way to India and Nepal to find inspiration for the album, for which he composed and produced. Going against the current K-pop trend, D-day eschews digital and electronic sounds for strings and acoustic. The album comes with four new songs including the main track Haruga Michigo, whose music video co-stars Chuno’s Yoon Joo Hee. This week it moves up seven spots to No. 13.

Music: Yoon Gun Hyung / Lyrics: Psy, Lee Ha Neul
Album: DJ DOC Vol. 7 Track 2 Purchase this album
Watch: MV Live Performance
Comment: This is the title track of DJ D.O.C’s 7th studio album, ‘Satire.’ It is a fun and upbeat song with Psy and Lee Ha-neul’s straightforward and rebellious yet funny lyrics with electronic beats. The chorus, where they shout ‘that’s just me’ like the rebellious group they are famous as, is highly addictive. (credits to Arirang TV – Pops In Seoul)

Music: Lee Joo Han / Lyrics: Lee Joo Han, Choi Woo Joon
Album: Winterplay Vol. 2 Track 3  Purchase this album
Watch: MV
Comment: A surprise debut into the top 20 this week is vocal jazz band Winterplay’s “Touche Mon Amour”. Last year, Winterplay had a hit song “Gypsy Girl” that received excellent reviews and was ranked in the top 10 at our “staff recommended hit songs of 2009”. Now the group returns with a new album and the title song “Touche Mon Amour” is ranked high on airplay and sales chart which enables the song to break into our top 20 despite lack of promotions and performances.

Album: Supreme Team & Young Joon (Brown Eyed Soul) mini-album “Ames Room” Purchase this album
Listen To: Full Song
Comment: Fast rising hip-hop group Supreme Team collaborates with Brown Eyed Soul’s Young Joon to release a project mini-album “Ames Room”. The first single “Why” drops to No. 20 this week. Supreme Team’s rap plus Young Joon’s soulful vocal makes this a wonderful song to listen to. It is already ranked very high on various internet charts in Korea. The next single from this album “Then Then Then” is expected to enter the chart soon.

Listen To: Full Song (thanks to Mardi09 for uploading) Watch: Live Performance

Comment: Modern rock band, Running Sky popular in the underground music scene in Hongdae, Seoul releases its first full length album titled, “A Piece of Memory.” All the songs in the album hold lyrics with feelings and memories people experience throughout their lives. Juny and G.ru, Dr. Core911’s drummer and rapper respectively also took part in the album, elevating the quality of the album. (credits to motoway065 for translations)

Comment: Sugar is a 4-membered girl group with Park Soo Jin, Hwang Jung Eum, Ahyoome Lee, and Yuk Hye Seung. They debuted in 2002 with their first album “Tell Me Why”. The first album did not produce any significant hit song. Sugar’s breakthrough hit “Shine” was coming from their sophomore album. “Shine” is a mid-tempo easy listening song with J-pop style melody. That song hit the top 10 in 2003. Hwang Jung Eum left the group after the second album and became a popular actress. Sugar went on and released two more albums before they broke up in 2005. Ahyoome Lee went solo and recently changed her stage name to Iconiq.