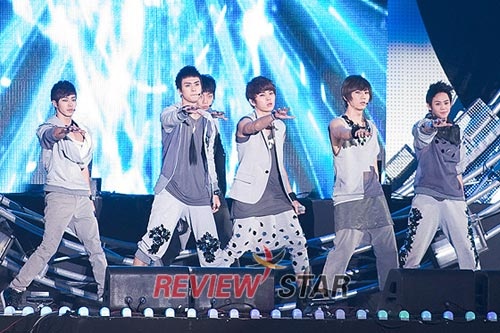 Comment: Brown Eyed Girls’ member, Ga In releases her first solo album after gaining much success with the rest of the group last year with “Abracadabra.” Jo Young Chul, who produced Brown Eyed Girls’ third album, “Sound-G” also took part in this EP along with other top staff members. The album revolves around the tango genre, hence the album title, “Step 2/4” which is the basic rhythm for the dance. The title track is “Irreversible,” co-composed by hit makers Yoon Sang and Lee Min Soo. The polished chord work, great melody, and rhythm making mesh well with the synth sounds, producing an electronica fused tango number. This week it moves up four more spots to No. 2 and will be one of the challengers for the top spot next week.

Music+Lyrics: Park Jin Young
Album: Miss A 2nd single Track 2 Purchase this album
Watch: MV Live Performance
Comment: Dropping one spot to No. 3 this week is top rookie female group Miss A’s second single title song “Breathe”. The girls who debuted this past July with much confidence and skill returns with a funkier and cuter image fans are expected to enjoy. Their debut song “Bad Girl Good Girl” already topped the chart and now they have their second big hit. Miss A will battle top male group CN Blue for this year’s top new artist honor.

Comment: 2PM’s new mini album titled, “Still 2PM” is expected to show an even more mature and refined image of them through seven tracks. The title song is “I’ll Be Back,” an R&B number with hip-hop and house rhythms. The song showcases 2PM’s very own style in music. One of the dance moves involved in the song is the “shuffle dance” popular in the 90’s. The boys will relive this “rabbit dance.” This week it moves up eight spots to No. 4.

Music+Lyrics: e.knock
Album: 2NE1 Vol. 1 Track 3 Purchase this album
Watch: MV Live Performance
Comment: This is the title track of 2NE1’s 1st studio album, ‘To Anyone.’ It is a hip hop song with hip hop rhythm created mainly by percussion instruments. It highlights the appeal of intense and unique rap skills of 2NE1. The members show off unique charismatic appeals with tattoos and smoky make-up and give off spectacular performances on stage. (credits to Arirang TV – Pops In Seoul)

Album: Supreme Team & Young Joon (Brown Eyed Soul) mini-album “Ames Room” Purchase this album
Watch: MV Live Performance
Comment: This is the official title song “Then Then Then” from Supreme Team & Young Joon’s (Brown Eyed Soul) “Ames Room” project album. This song is mainstream enough yet doesn’t lose the uniqueness from both artists. This week it moves up three more spots to No. 6.

Music+Lyrics: Bang Shi Hyuk
Album: Lim Jung Hee mini-album “It Can’t Be Real” Track 2 Purchase this album
Watch: MV Live Performance
Comment: Lim Jung Hee’s “It can’t Be Real” moves up two spots to No. 4 this week. “It Can’t be Real” was composed and penned by Hitman Bang. The producer came up with the title and lyrics of the song after watching the film, “Inception.” The song is about can’t believing breakup actually happened. The song has neo-soul sounds and uses trendy electronic synths.

Album: Lee Juck Vol. 4 Track 2 Purchase this album
Watch: MV
Comment: Lee Juck’s “With You” from his 4th album “Love” jumps dropped three spots to No. 8 this week. One of the most well respected artists in Korean Music, lee Juck’s new album immediately becomes top seller upon its release. ‘With You” also ranked very high in both airplay and internet charts. It is a rock ballad with lively lyrics, a light band sound, and free-wheeling energy to spare.

Music: Cates, McEwen, Jensen / Lyrics: Kim Ina
Album: SHINee Vol. 2 repackaged version Track 2 Purchase this album
Watch: MV Live Performance
Comment: SHInee has done exceptionally well this year with “Lucifer” and is back with its repackaged second album titled, “Hello.” The title track is of the same title and in contrast with their past song which showed off the boys’ powerful charms, the new song will show a sweeter side. This trendy R&B pop number is expected to be refreshing in vocals and rhythms. This week “Hello” drops two spots to No. 9.

Music + Lyrics: Kim Tae Hyun
Album: U-Kiss mini-album Vol. 4 Track 2 Purchase this album
Watch: MV Live Performance
Comment: U-Kiss did quite well with its past mini album, “At I That Easy” causing the entire country to follow the “strong man dance.” The boys are back with their fourth mini album, “Break Time” with includes seven new tracks of new style. The title track is “Shut Up!!” composed by Kim Tae Hyun who also wrote Ivy’s “Sonata of Temptation,” After School’s “Bang,” and T-ara’s “Crazy Because of You.” The song is arranged with hardcore electronic techniques, focusing even more on the group’s vocals and tough styles. This week it moves up 12 spots into the top 10.

Music: Kim Hyung Suk / Lyrics: Lee Mina
Album: Sung Shi Kyung digital single “It Is You” Track 2
Listen To: Full Song
Comment: Sung Shi Kyung is back with a brand new digital single, “It Is You” after completing his mandatory two-year military service. The song is about sadness felt through love and breakup and it’s something everyone must have gone through at least once in their lives. Created by Sung Shi Kyung and close friend/producer Kim Hyung Suk, “It Is You” is a song with beautiful melody and lyrics. Singer IU is featured in this song. This week it moves up one spot again at No. 12.

Music+Lyrics: Choi Yong Chan
Album: KBS Drama “Sung Kyun Kwan Scandal” OST Track 2  Purchase this album
Listen To: Full Song
Comment:  TVXQ’s Micky Yoo Chun makes his Korean drama debut in the highly anticipated KBS period drama Sung Kyun Kwan Scandal. Based on a novel by Jung Eun Gwol, Yoo Chun plays a stubborn, stickler student from a powerful and influential family who goes against his privileged background to seek education and equality, but he still has much to learn about how the world really runs. With Yoo Chun as the leading man, TVXQ bandmates Jun Su and Jae Joong have also joined the soundtrack. The JYJ trio return to K-pop with the drama song “Found It”, a lovely ballad that is very different from previous TVXQ songs. This week it moves back up three spots to No. 14.

Music+Lyrics: Yoon Jong Shin
Album: Superstar K 2 Top 11 Part 3
Watch: MV Live Performance
Comment: Last year’s Superstar K has produced hit artists like Seo In Kook, Jung Sul Gi, and Gil Hak Mi. The first artist from this year’s edition having a hit song is Kang Seung Yoon, who impressively remade Yoon Jong Shin’s “Instinctive” with his unique voice and rapping by Swing. Despite many established artists releasing new songs now, this song has captured the top spot in many internet charts across Korea. As a result, this song becomes our biggest mover this week. Kang Seung Yoon is definitely an artist to look out for.

Music+Lyrics: Shin Seung Hoon
Album: Shin Seung Hoon 20th Anniversary with Davichi
Watch: Live Performance
Comment: Davichi sings, “Event That Causes Two Breakups” for veteran singer, Shin Seung Hoon’s 20th anniversary album. The album will include remakes of Shin’s hit songs covered by junior artists along with a brand new song. Four artists will release a song in October, one every Thursday. Female duo, Davichi is the first guest and will sing, “Event That Causes Two Breakups” which is a ballad song included in Shin’s 9th album. This week it moves up eight spots to No. 16.

Comment: Riding the success of T-Ara and Cho Shin Sung’s “TTL” last year, the first megasize mixed group in Korea has debuted. Coed School consists of 10 members (6 guys and 4 girls) and their debut song “Too Late” is gaining attentions every week. “Too Late” is written by famous composer Cho Young Soo. The 10-membered group has made many live performances in music shows and gains new fans everyday.

Music: Kim Ki Won, Kim Do Hoon / Lyrics: Kim Do Hoon, Rhymer
Album: Mighty Mouth digital single “Love Is”
Watch: MV
Comment: Mighty Mouth releases a new single titled, “Love Is.” The group is known for collaborating with singers and actors alike, always surprising music listeners with catchy and easy-going music. The duo’s new song, “Love Is” features Korea’s top actresses, Kim Hee Sun who has actually taken a hiatus for a bit. This will be her first work since the break. The actress has some singing experience from her 2005 drama series, “Sad Sonata” in which she sang Natalie Cole’s “Love.” “Love Is” is a song with a simple, yet smooth melody line that flows well with the piano arrangements and medium-tempo hip-hop beats. This love song is expected to receive much love and attention. This week it is our highest debut at No. 18.

Music+Lyrics: Ha Kwang Hoon
Album: Kim Jong Kook Remake Album Track 4 Purchase this album
Watch: MV
Comment: Kim Jong Kook returns with a remake album filled with ten classics released between the 70’s and 90’s from the likes of Lee Moon Se, Jo Kwan Woo, Kim Jong Chan, and Lee Jung Suk. The artist adds his own distinct color to these songs, giving each and every one of them a new feel from the original. Title song “Come Back to Me” was originally sung by veteran singer, Jo Kwan Woo. The song is re-arranged to give it some trendy sounds from the South. Gary of hip-hop duo Leessang is featured in the rap portion of the song, which seem to flow well with Kim Jong Kook’s unique singing method. This week it drops eight spots to No. 19.

Listen To: Full Song (thanks to Mardi09 for uploading)

Comment: Rookie artist, Noel releases her first single, “A.M NO:EL” which took three years to produce and release. Although she’s a new singer, she has already gained respect from various composers as she has taken part in the chorus for established singers such as SE7EN, Kim Bum Soo, Lyn, Bada, and Gummy and has worked as a guide for Big Mama, Gummy, Lyn, and CSJH the Grace. The title track is “Don’t Get Shaken,” a medium tempo R&B pop number with a great melody line and lyrics that are perfect for the rookie singer. (credits to motoway065 for translations)

Comment: Shin Seung Hoon is a famous ballad singer that was very popular during the 1990s. He has released 20 albums in total and is considered one of the most influential ballad singers in Koea. Event That Cuases Two Breakups is from his 9th album and the MV involves a story featuring stars Kim Min Jong and Choi Ja Hye. The song is being remade recently by female duo Davichi as part of Shin Seung Hoon’s 20th anniversary album. (credits to ~S2~)