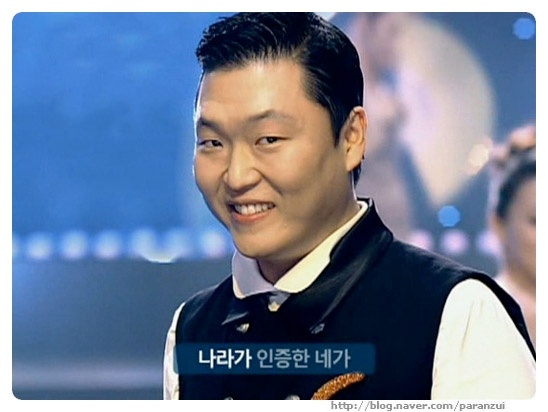 Music: Psy, Yoon Gun Hyung / Lyrics: Psy
Album: Psy Vol. 5 Track 2 Purchase this album
Watch: MV Live Performance
Comment: Psy’s “Right Now” surprised everyone this week, moving up six spots and stole the top spot against very strong competitions. This is his first album in four years. Known for his unique rap and dance songs, PSY has brought together an impressive team for his comeback album Psyfive. Cool’s Lee Jae Hoon features in the advance track “In My Eye”, while Seo In Young pitches in on Thank You. Brown Eyed Soul’s Jung Yup and YDG also participated in the album. The title track is “Right Now”. This song combines electronic arrangement along with Psy’s singing and rapping.

Comment: 2PM’s new mini album titled, “Still 2PM” is expected to show an even more mature and refined image of them through seven tracks. The title song is “I’ll Be Back,” an R&B number with hip-hop and house rhythms. The song showcases 2PM’s very own style in music. One of the dance moves involved in the song is the “shuffle dance” popular in the 90’s. The boys will relive this “rabbit dance.” This week it remains No. 2.

Music+ Lyrics: Bang Shi Hyuk
Album: 2AM Vol. 1 Track 2 Purchase this album
Watch: MV Live Performance
Comment: 2AM who debuted about two and a half years ago finally releases its first full-length album titled, “Saint O’Clock.” Bang Shi Hyuk who produced 2AM’s hit number “Can’t Send You Even If I Die” has also produced this album, elevating fans’ anticipation. One of the title tracks is “To You Who’s Not Picking Up the Phone” which centralizes around the theme of the loneliness and hurt felt through breakup. This week it is our highest debut at No. 3.

Music+Lyrics: Choi Gyu Sung, Rado, Shin Sa Dong Tiger
Album: Beast mini-album “Mastermind” Track 2 Purchase this album
Watch: MV Live Performance
Comment: Beast drops five spots to No. 8 this week with “Breath”.  Beast has already excited fans with “Clenching Fists Tightly” released prior to its upcoming third mini album, “Mastermind.” They need to wait no longer as the boy group returns this month. The title track is “Breath” a new song that is expected to upgrade Beast one notch higher. The song was composed by Sinsadong Tiger and Choi Gyu Sung and Beast member, Yong Jun Hyung took part in penning it. The strong synth riffs and drums flow well with the group’s vocals and adlibs. Beast is also our Soompi artist of the month for November. Check them out.

Music: James, Jansen, Larsson /  Lyrics: Lee Hyun Gyu
Album: SNSD mini-album “Hoot” Track 1 Purchase this album
Watch: MV Live Performance
Comment: Asia’s number one girl group, SNSD makes a surprise comeback with a new mini album, “Hoot.” The girls have been quite busy this year promoting their second album with songs, “Oh” and “Run Devil Run” and debuting in Japan. The title track of the new album is “Hoot,” which showcases their upgraded vocals and emotions. This week it is our biggest mover, up 13 spots to No. 9.

Album: Lee Juck Vol. 4 Track 2 Purchase this album
Watch: MV
Comment: Lee Juck’s “With You” from his 4th album “Love” remains at No. 10 this week. One of the most well respected artists in Korean Music, lee Juck’s new album immediately becomes top seller upon its release. ‘With You” also ranked very high in both airplay and internet charts. It is a rock ballad with lively lyrics, a light band sound, and free-wheeling energy to spare.

Music+Lyrics: Teddy
Album: 2NE1 Vol. 1 Track 2 Purchase this album
Watch: MV Live Performance
Comment: This is the title track of 2NE1’s first studio album, ‘To Anyone.’ It is about telling a cheating boyfriend that they should break up. It is an upbeat, pop style song with rock sounds and a melody that’s easy to listen to. In the music video, the members’ revenge on the ‘bad guy’ is quite something. (credits to Arirang TV – Pops In Seoul)

Music+Lyrics: Bang Shi Hyuk
Album: Lim Jung Hee mini-album “It Can’t Be Real” Track 2 Purchase this album
Watch: MV Live Performance
Comment: Lim Jung Hee’s “It can’t Be Real” drops three spots to No. 12 this week. “It Can’t be Real” was composed and penned by Hitman Bang. The producer came up with the title and lyrics of the song after watching the film, “Inception.” The song is about can’t believing breakup actually happened. The song has neo-soul sounds and uses trendy electronic synths.

Music: Han Sang Won / Lyrics: Choi Kap Won
Album: Zi-A & 4men digital single “Crying”
Watch: MV
Comment: There are many collaborations between artists this year, and the latest one we have two very talented artists, Zi-A and 4men, dueting on this powerful ballad “Crying”. Thoughout the song, we hear great vocals from both artists. It is the kind of songs only artists with their talents can pull it off. This week it drops one spot to No. 13.

Music: Kim Seung Soo, Han Jae Ho / Lyrics: Song Soo Yoon
Album: Rainbow digital single “Mach”
Watch: Live Performance
Comment: Rainbow scores another top 20 hit with their latest digital single “Mach”. Just not long ago their song “A” was also in our top 20. DSP Entertainment has high hope on this group which have a different image and different music style than Kara. But just like Kara, they keep improving and rank higher with each song. “Mach” moves up three spots this week to No. 14.

Music: Jun Ho Jin / Lyrics: HAM
Album: HAM digital single “So Sexy”
Watch: MV Live Performance
Comment: Female trio HAM (Heart And Mind) moves up one spot with “So Sexy”. This song surprisingly has a very high airplay and that moves it into the top 20. HAM debuted with “TT Dance” last year. Like Secret, they do not get a lot of attentions last year, but now they have their first top 20 hit and gaining popularity.

Music: Cates, McEwen, Jensen / Lyrics: Kim Ina
Album: SHINee Vol. 2 repackaged version Track 2 Purchase this album
Watch: MV Live Performance
Comment: SHInee has done exceptionally well this year with “Lucifer” and is back with its repackaged second album titled, “Hello.” The title track is of the same title and in contrast with their past song which showed off the boys’ powerful charms, the new song will show a sweeter side. This trendy R&B pop number is expected to be refreshing in vocals and rhythms. This week “Hello” drops seven spots to No. 18.

Music + Lyrics: Kim Tae Hyun
Album: U-Kiss mini-album Vol. 4 Track 2 Purchase this album
Watch: MV Live Performance
Comment: U-Kiss did quite well with its past mini album, “At I That Easy” causing the entire country to follow the “strong man dance.” The boys are back with their fourth mini album, “Break Time” with includes seven new tracks of new style. The title track is “Shut Up!!” composed by Kim Tae Hyun who also wrote Ivy’s “Sonata of Temptation,” After School’s “Bang,” and T-ara’s “Crazy Because of You.” The song is arranged with hardcore electronic techniques, focusing even more on the group’s vocals and tough styles. This week it drops six spots to No. 19.

Album: Transfixion Vol. 3.5 Track 1 Purchase this album
Watch: MV
Comment: Best known for the World Cup support songs “For Victory” and The Shouts of Reds, Transfixion is celebrating their tenth anniversary soon. Their new mini-album Never Say Goodbye exemplifies the great talent and appeal that has kept the band going for so long. The title song Never Say Goodbye is a powerful, wistful rock ballad that leaves a deep impression, particularly with its Hammond organ intro. This song has been released for more than 2 months but only in recent weeks did it pick up a lot of airplay points.

Listen To: Full Song (thanks to Mardi09 for uploading)

Comment: Daejin who sang the main theme song for the popular drama series, “Queen of Housewives” releases his first single, “Only One Love.” The song was composed by ballad maker, Ahn Chang Hyun who also created songs for Zi-A and December. Anyone who has loved and broken up can sympathize to this song. (credits to motoway065 for translations)

Comment: Lee Jung (real name: Lee Jung Hee) original debuted in 2002 with the group 7Dayz. After the group’s first album, Lee Jung left to pursue a solo career and released his first album in 2003. The title song “Again” is an R&B dance style song that are very common these days but were still a budding genre back then. The song got very good reviews and put Lee Jung on the map in the music scene. Lee Jung also got into acting, most notably in the MBC Sitcom “Nonstop 5” where he played himself. Recently, Lee Jung came back from his military duties and returned a new digital single “To Be Break Up”.