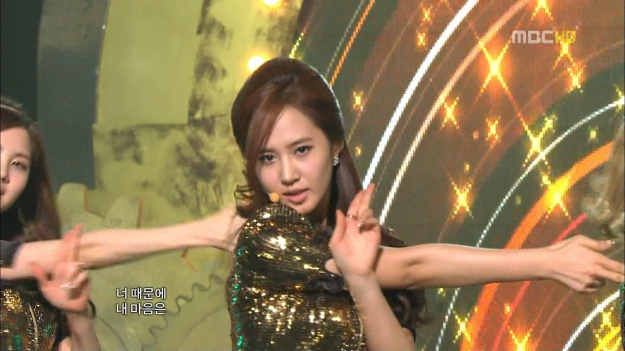 So, I was up early on a Saturday morning. Kids, I was headed off to Music Core again, because I just couldn’t get enough of that “down down down..shoot shoot shoot, hoot hoot hoot!”

Back in the line in the SNSD line, I was a bit late so I was #161. Although I was 66 numbers later than last week, I was in the same exact seat, haha.

For waiting in line and to be dedicated to your lifes blood as a So Nyeo Shi Dae fan, you get to bring home a group card and also a Taeyeon card. Whats the big fraggin deal you ask? Well, while the cards are similar, they are of a different pose and can only be obtained through attending performances of some other fan club meet.

Recording: Once again, I got to see the recording. Oh Won Bin had this beautiful stage for his comeback and what a treat for the eyes watching them set that up.

SNSD recorded 3 takes of that made it to the tape. Of course I didn’t mind cheering for them 3 times for the recording!

Rude guards: Unfortunately, there were some rude guards (as always at Korean shows) who talked down in to my friends, using this odd tone as if they were little kids. It basically translated into; “Don’t run into the theatre, kids. Walk.” Well first of all, we were all walking in a very orderly manner and not in any rush at all. I really don’t get it.

GP Basic – I’ll Be There

Ohh boy. Be sure to bring your ear plugs next time, ‘cause you never know when you’ll meet crazier and louder fans than you. I couldn’t hear a single note of the song cause a girl behind us was screaming on top of her lungs (as if she was transforming into a werewolf) constantly for the 3 minutes of the song. Enthusiastic fans to help their debut ftw!

If you can’t get enough of stirring a pot, look no further. I was laughing my ass off having a good time stirring the pot along with VNT!

These girls look just like dolls during this dance! I’m madly addicted to this track, but too bad the group left halfway through the song. (It happens during lives if they are done recording).

Oh Rainbow, they are like the second Kara! Much improved from their debut, Rainbow is finally a force to be reckoned with. They had so much energy on the stage and sang two catchy songs. I’m impressed!

Honestly, this song doesn’t do a thing for me. It’s not just them either. I love 2ne1, but the recent ballads released lately by Kpop groups are basically J.K. ballads. (Just kidding). But still, I loved the stage setup it was all so pretty and I’m always here to support them! I have a stamp from the date I attended.

Time did not allow the crew to clean up. But doh, a safety hazard! Girls Generation who had to dance amidst a pile of leaves. Dazzled and staring at the ground in confusion, the girls took a few moments to adjust their dance routine. Heels plus leaves, yeah. But still, the crowd roared and cheered like nothing happened. Oh well, no one cared since the recording was already finished and the live was just for the audience.

Well that’s a wrap. I’m very excited because Kara comes back next week ! And Ohh my goodness, It will be awesome!

2NE1
GP Basic
Minho
Rainbow
VNT
How does this article make you feel?