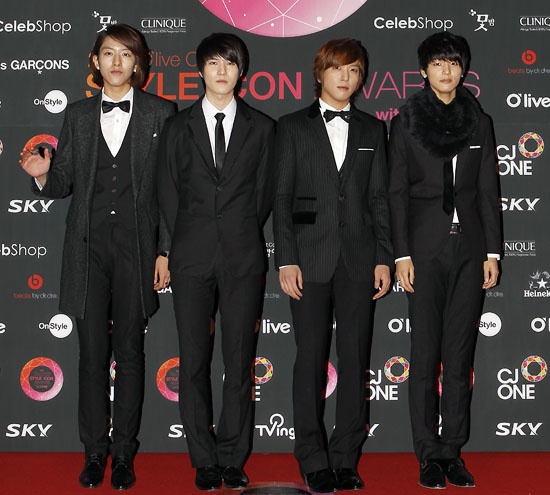 Coming to you a few days late (we apologize) is our photo recap of the 2010 Style Icon Awards, which were held at the CJ E&M Center in Seoul on November 17. Along with the pictures, two of us have posted a bit of commentary (which reflect the opinions of no one but melkimx and green-rose). Let’s get started!

NE1 appeared with Jeremy Scott. Scott is an American fashion designer whose clothes have been worn by the likes of Madonna, Rihanna, Lady Gaga, and Britney Spears — way too many names to count, most of them in the music scene.

Look, he has teddy bears on his sneakers!

Jeremy Scott is close friends with CL and has appeared with her and 2NE1 on several occasions. We can see why they get along; they both know how to pose on the red carpet like no one’s business! We love the clothes hanger… it shows that CL’s dress is two-ended. When she’s tired of wearing this one, she can wear the other end and put this one on the clothes hanger instead.

Some people have said that this dress doesn’t flatter Minzy very much, but we think she looks really good in it. Love the haircolor but maybe not the style.

We bet a lot of girls are envisioning that So Ji Sub is delivering the flowers to them.

He does the “smoldering look” very well.

etizens criticized Kim Jung Eun for showing up on the red carpet with loose threads at the hem, but when we look at this fringed brocade minidress, we feel like that should be the least of their concerns. But she’s the one who won the Style Icon award, not me, so what do I know?

Flawless, right down to the nail polish!

Song Joong Ki makes me sad, and not just because he has a pretty girl, which by the way is Seo In Young, former member of the Kpop Group Jewelry, on his arm. He makes me sad because he chose to pair his devastatingly handsome face with a horrible blazer and a dull outfit.

CN Blue looks so happy to be here.

Kim Hyun Joong plays it safe — and handsome — with a tux. This is the second fashion award he’s picked up in two weeks.

Lee Byung Hun… what can we say? That smile!

Oh Ji Eun manages to pull off the animal print! Just goes to show she belongs at these awards!

Oh Yeon Soo shows everyone why she won the Fashionista award. She looks so elegant!

Shin Min Ah accepts her Female Talent Style Icon award. I think most people prefer to see her as the beautiful “gumiho” in the white dress than wearing this kind of mature-looking gown, but she still has a radiant beauty.

Even though she didn’t win any awards, Lee Yoon Ji really looks like a style icon!

Lee Young Eun shows off her S-line in this gorgeous red dress, perfect for a starlet… but she looks a little uncomfortable without a clutch!

Joo Jin Mo smirking his way through the red carpet event, but boy does he look dashing!

One of our biggest winner of the night, lets have a drum roll for TOP! That guy can sure pull off many hairstyles! Love it!

Jeon Hye Bin shows up with Kim Min Joon in a dressy silk champagne gown, while Kim finally makes an appearance since his role in “Friend, an Untold Story”! Looking like a cute couple to us!

2007’s Miss Korea, Lee Ji Sun, sparkles with a black dress and her fur on her arms!

Park Soo Jin shows up in black and white. We like the dress better from the back than the front. Check it out:

The grand place where the awards were held…

… and the beloved fans gathering at the ceremony!