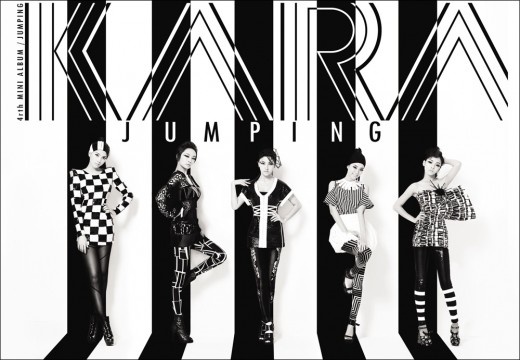 This is our last weekly music chart of 2010. Next week we are going to announce the staff recommended top 20 songs of 2010.

Don’t forget to check out the nominees of our own 2010 Soompi Gayo Award. Be sure to cast your vote on the top 10 singers of 2010 and also play our prediction contest.

Music: Kim Seung Soo, Han Jae Ho / Lyrics: Song Soo Yoon
Album: Kara 4th mini-album Track 2 Purchase this album
Watch: MV Live Performance
Comment: Kara’s “Jumping” remains No. 1 on our last chart of 2010. It is a pop dance number co-composed by Han Jae Ho and Kim Seung Soo. The song incorporates both retro sounds from the 80’s and current euro pop sounds. The song is about wanting to go back to the past to one’s past love.

Album: Brown Eyed Soul Vol. 3 Track 3 Purchase this album
Watch: MV
Comment: Moving up quickly to No. 2 is Brown Eyed Soul’s “If It’s The Same”. Brown Eyed Soul, who has been releasing many singles the past year, finally releases its full length third album titled, “Brown Eyed Soul.” The album includes previous singles, “Blowin’ My Mind,” “You,” “Can’t Stop Loving You,” “Never Forget,” “Love Ballad” and “I Will Move Aside” along with solo tracks from the individual members. The title track is “If It’s the Same,” which showcases Jung Yup’s sweet and Naul’s emotional vocals.

Music: James, Jansen, Larsson /  Lyrics: Lee Hyun Gyu
Album: SNSD mini-album “Hoot” Track 1 Purchase this album
Watch: MV Live Performance
Comment: This is the title track of Girls’ Generation’s 3rd mini album with the same title, ‘Hoot.’ It is an upbeat song that shows the characteristic vocal styles of the 9 members with a blend of go-go rhythm and retro guitar sounds. The lyrics contain a cute warning message to their ‘boyfriends’ who often hurt them emotionally. (credits to Arirang TV – Pops In Seoul)

Music+Lyrics: Cho Young Soo
Album: Huh Gak first mini-album Track 1 Purchase this album
Watch: MV
Comment: Contestants of Super Star K Season 2 keeps hitting our chart. Winner Huh Gak releases his first mini album titled, “Whenever.” Included in the album is his debut track, “Whenever,” a ballad written by top composer Cho Young Soo. One can hear the powerful vocal of this up and coming talent on this song. This week “Whenever” moves up one more spot to No. 4.

Music+ Lyrics: Kim Do Hoon, Lee Sang Ho, Shin Sa Dong Tiger
Album: Beast mini-album Vol. 4 Track 2 Purchase this album
Watch: MV Live Performance
Comment: Beast’s “Beautiful” drops three spots to No. 5 this week. Beast keeps coming back with new hits and returns already with their fourth mini album titled, “Lights Go On Again.” Fans are expected to get surprised with what the boys have in store for them. The title track is “Beautiful,” a bright, loving, listener friendly, and lively number confession song perfect for the upcoming winter.

Music: Cho Young Soo / Lyrics: Wheesung
Album: Orange Caramel 2nd mini-album Track 1 Purchase this album
Watch: MV Live Performance
Comment: Orange Caramel who did quite well with their debut song, “Magic Girl” returns this fall with a lovely image. Their title track is “Ah-Ing” which was created by the Jo Young Soo – Wheesung combo who also created, “Magic Girl.” The song is expected to be yet another hit with its trendy Korean sounds. The lyrics, “Again and again ah-ing ah-ing; I’m happy, so ah-ing ah-ing…” are very addicting and energetic. The song will be about the feelings formed over a crush. This week it drops two spots to No. 6.

Music+ Lyrics: Bang Shi Hyuk
Album: 2AM Vol. 1 Track 2 Purchase this album
Watch: MV Live Performance
Comment: This is the double title track of 2AM’s first full-length album, ‘Saint O’Clock.’ It’s a ballad song about the emptiness and pain one is left with after a break-up, which is perfectly expressed through 2AM’s soulful voice. The listeners are bound to relate to the sad lyrics that are expressed through the serious voices of the members. (credits to Arirang TV – Pops In Seoul)

Music: Cho Young Soo / Lyrics: Ahn Young Min
Album: Tae Yeon, The One digital single “Like A Star” Track 1
Watch: MV
Comment: This song is a very special collaboration. The One and SNSD’s Taeyeon have come together to release a single titled, “Like a Star.” The two singers go way back. Ten years ago, prior to SNSD’s debut, The One was the vocal teacher for Taeyeon among others such as DBSG members. The song, “Like a Star” is a duet ballad number composed by hitmaker Jo Young Soo with lyrics penned by Ahn Young Min. This week it drops back three spots to No. 9.

Music+ Lyrics: Brave Brothers
Album: Sistar 3rd single Track 3 Purchase this album
Watch: MV Live Performance
Comment: 2010’s top rookie group Sistar, who has done quite well with “Push Push” and “Shady Girl,” returns with their third single album, “How Dare You.” The song is about a girl who shows her tough and independent side after being hurt by love. This number which was created by the Brave Brothers, fuses both rock and electronic sounds. This week it is our biggest mover, up 28 spots to No. 10. With their latest top 10 hit, Sistar solidifies their status as one of the top rookie groups in 2010. Let see how they fare against CNBlue and Miss A in year end awards.

Music: Jun Hae Sung / Lyrics: Won Tae Yeon
Album: SBS Drama “Secret Garden” OST Part 1 Track 1
Watch: MV
Comment: This song is coming from the blockbuster SBS drama series, “Secret Garden” starring Hyun Bin and Ha Ji Won. The first song from the OST “That Woman” sung by Baek Ji Young who has taken part in many soundtracks including the one for recent hit series, “Iris.” This ballad was composed by Jeon Hae Sung and penned by Won Tae Yeon. Despite no promotional activity by the singer, this song is one of the most popular songs in Korea now thanks to the drama. This week it moves up ten spots to No. 12.

Music+ Lyrics: E-Tribe
Album: T-Ara mini-album Vol. 2 Track 1 Purchase this album
Watch: MV Live Performance
Comment: T-ara who started out very strong at the beginning of this year, finally returns with their 2nd mini album before year end. E-tribe, the hit maker of “U-Go-Girl” and “Gee”, produced their title song, “Yayaya”. “Yayaya” is a unique dance-pop song with addictive melodies and lyrics. This week it is our highest debut at No. 13.

Music: Kim Do Hoon / Lyrics: Choi Kap Won
Album: Gummy & Bobby Kim digital single “Love Recipe” Track 1
Watch: MV
Comment: We have many good collaborations in 2010 and this is another one. It is from two well known R&B artists Gummy and Bobby Kim. Their duet “Love Recipe” is written by famous composer Kim Do Hoon. The MV stars actor Gong Yoo, who recently came back from military duties. This week “Love Recipe” moves up two spots to No. 14.

Music: Min Myung KI / Lyrics: Min Young Jae
Album: Gavy NJ mini-album “Glossy” Track 1 Purchase this album
Watch: MV Live Performance
Comment: Gavy NJ, who has received lots of love with their recent single, “Let’s Stop Here” has finally returned with their mini album, “Glossy.” The title track is “Pick Up the Phone” which was composed by hit producer Min Myung Ki who has also written the songs, “Sunflower” and “Love Story” for them. The song was penned by Min Young Jae who also penned 4Men’s “Can’t Do It.” The song is about a girl who feels like going crazy because her ex-boyfriend fails to answer his phone. This week it remains at No. 15.

Music+Lyrics: Park Ki Wan
Album: SM The Ballad EP Track 1 Purchase this album
Watch: MV Live Performance
Comment: SM Entertainment’s ballad project group, SM The Ballad debuts with their first album, “Miss You.” The group consists of Trax’s Jay, Super Junior’s Kyuhyun, SHINee’s JongHyun, and rookie singer, JINO. There are a total of five new tracks, where each vocalist is able to show his own distinctive vocals as well as harmonize with one another. Fans will be able to see a different side of their favorite artists through SM The Ballad. The title track “Miss You” moves up seven spots to No. 16 this week.

Music: Lee Yoo Jin / Lyrics: Ahn Young Min, Supreme Team
Album: Lee Ki Chan digital single “L.O.V.E”
Watch: MV
Comment: Lee Ki Chan returns to the music scene after two years and five months. During the two long years he was able to complete his mandatory military duties and return to do what he does best. “L.o.v.e” is a medium tempo ballad song featuring hip hop duo, Supreme Team. The song is about a couple excited about starting love filling the cold winter with a warm atmosphere. The Christmas style melody is perfect for the season. This week it debuts at No. 17.

Music: Cho Young Soo / Lyrics: Ahn Young Min
Album: SG Wannabe Vol. 7 Part 1 Track 3 Purchase this album
Watch: MV Live Performance
Comment: This is the title track of SG Wannabe’s mini album, ‘SG Wannabe 7 Part.1’ This is a medium tempo song with an unforgettable upbeat rhythm and a melody with mass appeal. The song contains a love confession, and the sweet voices of the SG Wannabe members will infect their listeners with a ‘happy virus.’ (credits to Arirang TV – Pops In Seoul)

Album: Bye Bye Sea Vol. 1 Part 1 Track 2 Purchase this album
Watch: MV
Comment: City Complex is the first full album from indie rock group Bye Bye Sea. The title song “My Heart Is Telling (Reprise)” is also on the OST for SBS drama “I Am Legend. Vocalist Namu and the instrumentation by the other members harmonize well for this album. This week it moves up seven spots to No. 19. (credits to ~S2~)

Comment: Vocalist Mekid releases his first single after five years of rigorous training. The song, “In Case Pain Returns” features Soul Cry who has been gaining popularity with “The Start of Love is Confession.” The two singers’ harmonization is expected to give listeners goose bumps upon listening. (credits to motoway065 for translations)

Comments: Otherwise known as Steve Yoo, Yoo Seung Jun debuted in 1997 debuted with first album West Side under Brothers Entertainment. His debut single “Scissors” was a hit along with I love you noona and won Best newcomer at many award shows. “Scissors” was famous for the choreography where the back dancers lined up and moved in sync. Yoo Seung Jun was one of the most popular male dance music soloists in the early days of k-pop. Sadly, his career came to an abrupt end when he refused to enter compulsory military service. He has not been allowed to enter Korea ever since. (credits to ~S2~)