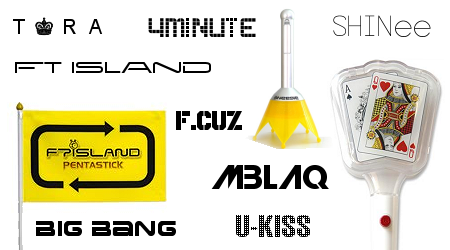 Artists have many ways of identifying themselves – their clothes, style, even the font of their name shows their individuality. Fan clubs play an important role in distinguishing fans from one another. Artists like to show their affection to fans with a title fit especially for them. Fans like to let their loyalty to the artist they love be known to others. In Korean pop, fan clubs, nicknames and colors are a form of identity. Once you first step into the K-pop fandom it’s easy to get lost amongst all the fan clubs. You might be a fan of an artist and not know how you should identify yourself. This guide was built especially to help you navigate the everbuilding world of fanclubs.

This isn’t a complete guide. Groups that have been on a long hiatus (CJSH The Grace) or disbanded completely (H.O.T.) are not mentioned. Also, some groups do not have official names or colors yet.

Origin of Name: The constellation Cassiopeia is made of five points which create a W. DBSK also uses the synonym TVXQ~ Tracing TVXQ on the keyboard ALSO makes a W. The Cassiopeia fanclub also refer to themselves as Cassies for short.

Origin of Name: It came from the idea that they would be everlasting friends with their fans.

Origin of Name: It is named after their first studio album. But SHINee fans refer to themselves as Shawols. It’s a shortening of SHINee World (샤이니월드), SHYA and WOL = SHAWOLS.

Origin of Name: The idea that BoA’s music makes her fans dance + jump is what gave birth to Jumping BoAs.

Origin of Name: The stylization of SONE is 소원 which means wish, and was a song featured on their first album as well as in the title of their song “Tell Me Your Wish.” But it also has a deeper meaning. 소원 (SoWun) pronounced “So One” implies that Girls’ Generation will always be one with their fans.

FANCLUB NAME: So far f(x) does not have an official fanclub name. Aff(x)ection is the name of the International Fan Forum but not the name of their fanclub.

Balloons are distributed at f(x)’s performances. The color of the balloons are periwinkle blue (looks closer to lavender to me). SM has never officially announced the color but we can assume it might be periwinkle.

Origin of Name: Fans “full of” “wonder” for the Wonder Girls.

Origin of Name: 2PM being the hottest hour of the day.

FANCLUB NAME: I AM

Origin of Name: 2PM + 2AM = One Day. Putting the two names together you get “I AM HOTTEST.”

Origin of Name: The belief Se7en holds is that his fans bring him in luck.

Origin of Name: 21 is the highest number a person can achieve while playing Blackjack.

Origin of Name: Beauty & The Beast

There was some confusion over the color because fans of S.E.S. complained that the color was too similar to S.E.S. That was back in September and there’s been no announcement of a new color. We’ll safely assume the color is still violet.

Origin of Name: Rain’s fans are his clouds because clouds bring the Rain!!

Origin of Name: All the members of MBLAQ are of A Bloodtype, and the + comes from the full meaning of their name: Music Boys Live in Absolute Quality. The “Absolute Quality” is A+.

Origin of Name: Kara’s family are their fans. Putting Kara and the Spanish spelling Familia together and you get Kamilia.

Origin of Name: Named after the title of a song from their first studio album. The yellow flags FT Island fans carry around are called Pentasticks.

Origin of Name: Combination of “Blue” and “Voice.” The explanation given by FNC Music declares that C.N.Blue’s fans are their voice. C.N. Blue = Music / Fans = Voice.

Origin of Name: Jewelry being protected and kept safe by a Jewel Box.

Origin of Name: The four of them are unified to make Brown Eyed Girls last together with their fans.

FANCLUB NAME: There are lots of names floating around. Diadem is a popular one, but it hasn’t been officially recognized by Mnet so far.

Origin of Name: High Skool is the name of a song off their album High Society.

Origin Of Name: …Well, it’s obvious but I’m sure if U-Kiss asked “Who should I kiss?” the fans would yell back “Kiss ME!” Seems like a good fit. U-Kiss / Kiss Me.

Origin of Name: No official explanation given, but we can assume since Andromeda is the daughter of another famous constellation mentioned, Cassiopeia, that it may have something to do with that (Teen Top = DBSK’s daughter?).

Origin of Name: Pledis asked for fans to give suggestions. They chose this name out of 300 other names because they felt it was something ALL fans could identify with (yes, this out of Pledis’s mouth) and it’s the name of a track on their first mini-album.

Origin of Name: They haven’t given an official explanation but I assume it’s because to them, the fans are like their runway.

Origin of Name: Was one of 10 contenders for a fanclub name and voting through their daum cafe revealed ZE:A STYLE as the winner.

Origin of Name: Starship Entertainment held a poll and STAR1 received the most number of votes.

Origin of Name: The name was announced by Miss A via a video posted to their daum cafe in the hopes that fans will shout “Say A” at their performances.

Origin of Name: Woollim Entertainment held a poll and Inspirit received 70% of the vote.

Origin of Name: Jay wanted his fans to choose the names. The fans submitted the names and it was narrowed down to three chosen by Jay. The fans chose Jaywalkers in the final poll.