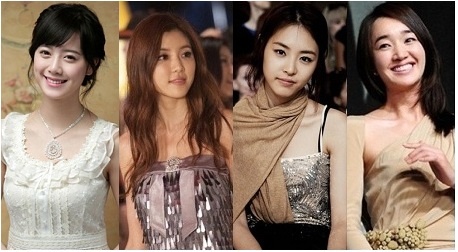 What if These Actresses Were Girl Group Members?

What would it be like right now if these actresses had all ended up becoming part of a girl group? They are multi-talented female stars that almost made it to a girl group. Initially, Ku Hye Sun and Park Han Byul were trainee singers of YG Entertainment but later switched their career paths to become actresses, due to Yang Hyun Seok’s suggestion.

Ku Hye Sun was so close to forming a three member girl group with 2NE1’s members Sandara Park and Park Bom. Can you imagine?! I’m guessing they would have been a girl group with a completely different style, perhaps less hip hop-like and funky, than the current 2NE1.

Ku Hye Sun’s original dream was to become a singer. However, the versatile actress later realized that she was relatively more talented in acting rather than singing. While the actress hasn’t debuted as a musician, she continues to pursue and develop her musical interests through composing. When asked about any plans to officially debut as a singer, Ku Hye Sun replied, “I dreamed excessively about becoming a musician ever since I was young. But one day I found myself feeling small while listening to Gummy sing live. I wouldn’t dare to try out unless I excel at singing and dancing because the idol groups these days are so talented.”

‘SE7EN’s girlfriend’ Park Han Byul was also the type of case who almost ended up becoming a singer. On the SBS’s “Strong Heart” episode that was aired on March 8th, she stated, “I was street casted. I think YG Entertainment wanted to train me into a singer, and they made me practice dancing, along with Lee Eun Joo, currently Yang Hyun Suk’s wife.” However, Park Han Byul ultimately debuted as an actress. She claimed, “I later heard that I was YG’s first trainee in which Yang Hyun Suk proposed to pursue an acting career.” Ku Hye Sun and Park Han Byul share similar backgrounds as they both gained fame and popularity as ‘Ulzzangs’ during their pre-debut years.

Likewise, it’s already a well-known fact that Lee Yeon Hee almost ended up becoming a SNSD member.Lee Yeon Hee, currently an actress under SM Entertainment, is part of the SM family along with SNSD. She almost happened to become a SNSD member through a past audition. Back in 2007, Lee Yeon Hee had revealed, “I participated in a past audition which picked one girl each from Korea and Japan and make them into a celebrity. I was one of the two girls who made it to the final round, but I got eliminated in the end. The winner was SNSD’s Soo Young.” Well Lee Yeon Hee seems to have the fresh and pure image that would fit well with the SNSD girls, but a SNSD member instead of Soo Young? I’m not so sure about that.

Elegant Actress Soo Ae, nicknamed “Dre Soo Ae” for winning multiple best dresser titles in various events and award ceremonies for her fashionable dress styling, was also once a trainee for a four member girl group before her debut. What’s more shocking is that she was in charge of the rapping part within the group. Wow, with the current pure and classic image that she has, it’s so hard to visualize her as a rapper! The actress had appeared in MBC’s “Golden Fishery” in the past, and showed off her rapping skills reminiscent of her past years.

On the other hand, there are also reverse cases in which actresses decide to change their career path as a girl group member. ‘Hyun Bin’s ex-girlfriend’ Hwang Ji Hyun, a former model who initially debuted as an actress in 2002 through MBC’s sitcom “Nonstop 3,” and also starred in MBC’s “9 End 2 Out,” SBS’s “Comeback Soonae,” and “Green Coach,” is training to make a debut as a four group idol group member from T-ara and Davichi’s ageny Core Contents Media.