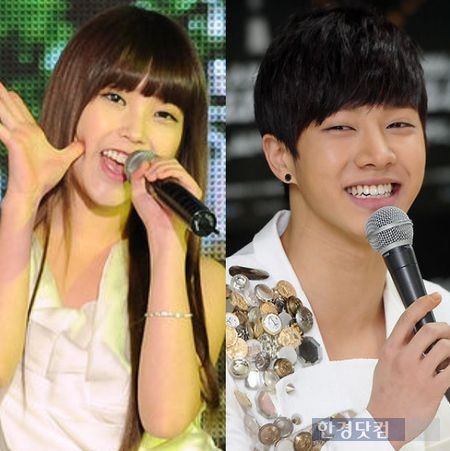 IU and Lee Gi Kwang, fresh off their hit dramas “Dream High” & “My Princess”, will join the cast of MCs for SBS “Ingigayo.”

According to a SBS representative, IU and Lee Gi Kwang of idol group BEAST will begin to appear as MCs on SBS “Ingigayo,” starting from the episode aired on the 20th.

In replacement of Jung Yong Hwa, who will be quitting after his last episode on the 13th, the two will team up with the two remaining MCs, Jo Kwon and Sulli.

In regards to the reasons for choosing Lee Gi Kwang and IU, the representative commented, “Lee Gi Kwang has impressive MCing skills among idol members. I’m expecting he will create a huge synergy effect with Jo Kwon.” He also added, “IU is one of the major female idol stars who stand out these days, along with Sulli. I’m looking forward to see her great MCing skills.”

So it looks like “Ingigayo” will be highly popular, more than ever among teenagers and fans in their 20’s, due to the MC changes. The MC cast changes to a four person structure featuring the four latest hottest idols—Jo Kwon, Lee Gi Kwang, Sulli, IU. But we will miss you, Jung Yong Hwa!

IU
Jung Yong Hwa
Sulli
How does this article make you feel?