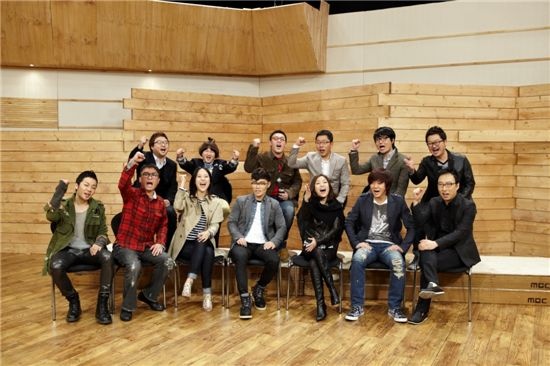 First Elimination from MBC “Survival: I am a Singer”

The first to get eliminated from MBC’s popular reality show “Survival: I am a Singer” ironically is not from one of the seven main contestants—it turns out to be the lead producer of the show. In a rather stunning move, MBC announced today through a statement that Kim Young Hee, the lead producer of “Survival: I am a Singer” will be replaced, although they declined to specify who the replacement will be.

“Even if the contestants and the production crew agreed to tweak the rules a bit following an unexpected incident, ‘last place elimination format’ was something they promised to the viewers,” MBC said in a statement. “We decided to replace Kim (Young Hee) for failing to keep the promise with our viewers,” it added.

In last week’s episode, Kim Gun Mo was voted last place for his cover performance of Lim Joo Ri’s “Putting on Thick Lipstick.” Upset over the decision, fellow contestant Lee So Ra argued it’s hard to accept the result and that she would ask the production crew to edit and film the show again. Kim Gun Mo would have been eliminated and replaced by a new contestant had the production crew stayed with the initial rule, but following an emergency meeting during the show, Kim Gun Mo was granted a consolation round and second chance to redeem himself next week.

During the show, Kim Young Hee told the viewers, “Our goal is not to embarrass singers by eliminating them. We’ll continue to give eliminated contestants a second chance to redeem themselves.” His comments were contrary to the show’s original idea where seven singers would give one performance each week, and the elimination would be determined based on the number of votes they receive from the 500 audience members.

“Survival: I am a Singer” garnered explosive attention even before airing its first episode for its never-before-seen format and star-studded contestant pool. The seven singers competing in the show are arguably some of the best live performers in KPOP history: Kim Gun Mo, Lee So Ra, Kim Bum Soo, Yoon Do Hyun, Jung Yeop, Baek Ji Young, and Park Jung Hyun. The show’s been one of the most talked about programs over the last several days, especially following the latest incident. Last week’s episode saw an 11.8% TV rating, which is the first time in two years for an MBC Sunday night program to crack double digit ratings. Despite replacing the producer, “Survival: I am a Singer” has already filmed the next episode featuring Kim Gun Mo’s return, so the controversy surrounding the show won’t be gone any time soon.