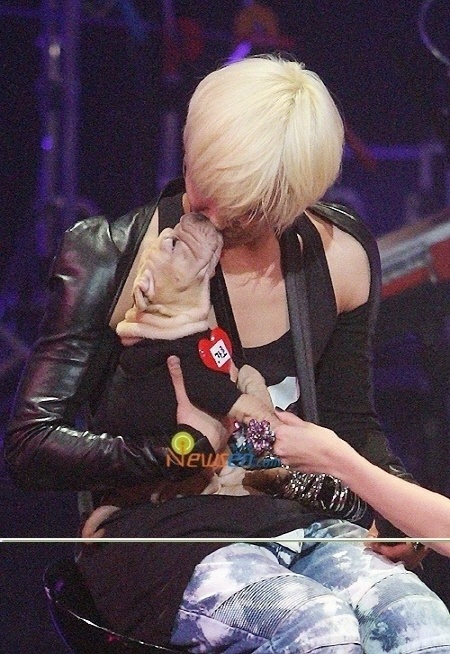 Whether a Korean or a foreign celebrity, celebrities all seem to have one thing in common: they are animal lovers—and idols are no exception. Recently, there has been a surge of idols who are unveiling their lovely pets through personal websites such as Cyworld, me2day, and Twitter. These lucky pets who get to eat, sleep, cuddle around, and enjoy nonstop physical affection with their celebrity owners can be considered idols themselves among fans who envy them. With this being the case, these star pets even boast large fan bases similar to that of their owners. So who are these popular celebrity pets?

We tried gathering a collection of stars who are madly, deeply, truly in love with their pets. This article is the first part of the three part celeb & pet series. Enjoy! �de00

These two are a match made in heaven �de00

“Gaho” is already a superstar enjoying explosive popularity. Thanks to his awesome owner, lucky Kaho also enjoys star treatment by making special tv appearances, as on SBS’s “Kim Jung Eun’s Chocolate,” Mnet’s “BIG BANG TV,” and even G-Dragon’s music video as well as posing together for photo spreads. He even got to walk down the red carpet with daddy G-Dragon!

Tae Yang named his dog “Boss,” hoping he will become “a boss among dogs.” The two look like best buddies, how cute! �de42

Although the name “Bang Shin” has a similar pronunciation to the Korean word ‘byung shin’ (idiot), it’s short for “become a shin (God) of Bengals (type of cat).” The two always make great partners for posing together in photos uploaded on Cyworld and Twitter.

“I bought three land turtles because I felt lonely in my dorm and was looking for something fun to do,” Yesung commented on the December 9th episode of SBS’s “Midnight Entertainment TV”. However, when he called his turtles to come over to him, they ignored his words and went away from him in the opposite direction instead. Slightly embarrassed, he jokingly commented “I raised these turtles because I felt lonely but they are making me lonelier.” At first he only raised one tortoise named “Ttangcchoma” but he later bought two more and gave them cute names, “Ttangcchoming” and “Ttangcchmaeng.”

Well it looks like Yesung finally found himself a new pet that might listen to him. On March 25th, he revealed his new puppy named Kkoming (variation of kkomangie, meaning little one). He posted on Twitter, “Yesungie’s new family member… Our Kkoming who hasn’t even been 70 days since she was born. Black and Tan Pomeranian ~~ So so cute ^^ Grow strong beside oppa! And get along well with your turtle brothers.”

It’s a well known story to SS501 fans. About two years ago, Kim Hyung Joon bought a ‘toy poodle.’ ‘Toy poddles’ are tiny poodles that have been bred into smaller sizes like that of a stuffed animal. This is done since original poodles are usually difficult to raise inside a typical house due to their huge size. Typically, ‘toy poodles’ are tiny enough to hold up with one hand, with an average size around 26cm and weighing about 2~3kg. However, netizens are guessing that Kim Hyung Joon might have been scammed because his toy poodle (?) ‘Cchoko’ instantly grew into a huge dog that one can barely hold up with two hands.

Various photos have been posted online of Kim Hyung Joong holding Cchoko, some when he was a puppy and others of Cchoko fully grown as a huge mid-sized dog. It has been said that during his radio show, he confessed his mistake by admitting that he “accidently fed him 80 grains of dog food for each meal, when it was supposed to be 80 a day.” Yet the fans are claiming despite feeding an overloaded amount of food, a toy poodle can’t all of sudden grow into a supersized poodle and are convinced he was scammed into buying a dog which wasn’t a toy poodle in the first place.

SHINee and Their Dogs “Eve” and “Coco” ♥

SHINee’s Lee Tae Min named his cute toy poodle “Eve” to commemorate their first meet on Christmas Eve of 2006. Lee Tae Min expressed his love for Eve by stating, “Every day when I open my eyes in the morning and close my eyes at night, you are always next to me. That’s the happiest time of the day. Let’s always be together for the start and end of everything for a long time! I’ll love you more.” Kim Ki Bum named his Yorkshire Terrier “Coco” because the first thing that popped into his mind when he saw brown “Coco” was a chocolate cookie. He commented, “My lovely treasure Coco, I truly want to live forever with you. I’ll never be apart from you!”