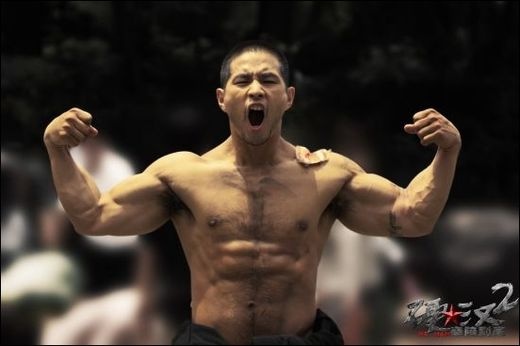 According to sources, Yoo Seung Jun is receiving favorable reviews for the movie’s success as well as his natural acting style in the movie. A movie representative commented, “Although it was his second movie, his acting was natural and he did a great job in acting out the difficult action scenes.”

In preparation for his movie, Yoo Seung Jun underwent intense martial arts training program while sticking to a strict diet for five months. He also received much praise from the staff on the set for acting out highly advanced and dangerous action scenes personally, instead of a depending on a stuntman.

Due to the success of “Tough Guy 2,” Yoo Seung Jun’s gained fans and popularity in China. It has been told that he has been receiving numerous love calls from various Chinese action movie directors who want to cast him as the bad guy character in their action flicks.

At the “Tough Guy 2” press conference that was held on March 23rd, Director Sheng Ding raved about Yoo Seung Jun, “This is a movie that stars the ultimate buff, muscular guy. Yoo Seung Jun’s muscles and acting skills are the best.” He also added, “It’s difficult to find an actor like Yoo Seung Jun who is well-built, good at acting, as well as fluent in both Chinese and English. If I get to direct ‘Tough Guy 3’ I would really like to work with Yoo Seung Jun again.”

Meanwhile, Yoo Seung Jun is awaiting filming for his next movie “12 Chinese Zodiac Heads” to start in July.

Yoo Seung Jun
How does this article make you feel?