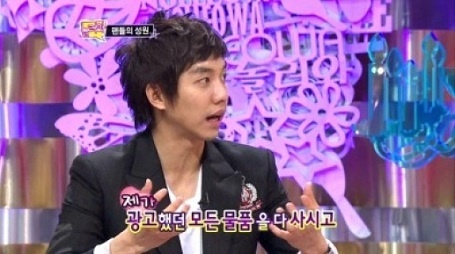 When asked about his most memorable fan, Lee Seung Gi replied “There was a fan who brought every product that I endorsed, even replacing her refrigerator which was working fine.” He added, “She even took home the life-sized figure of me from the cosmetic brand store that I endorse.”

At that moment, fellow guest member Hong Kyoung Min playfully asked Lee Seung Gi “You didn’t endorse an apartment yet, did you?”, making everyone at the studio burst into laughter.

Lee Seung Gi continued to tell a story about meeting a plane captain who confessed that he’s a huge fan of him. “Only after I received a letter from the flight attendant did I realize the meaning of the in-flight announcement. The plane captain announced a three-line poetry using his name and my name,” the actor reminisced.

In this episode, Lee Seung Gi also revealed how he ended up debuting after giving a performance back in his school days at a theater that was managed by Lee Sun Hee.