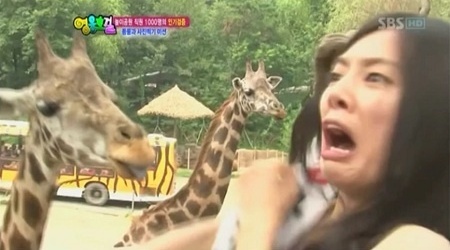 Hong Soo Ah’s four part collection of hilarious screen shots have been released. On the episode of SBS’s “Good Sunday—Heroes” that was aired on the 24th, the cast members played the “Guessing personal thoughts of each member” game at an elementary school which was their shooting location for the first episode.

Hong Soo Ah, who is known to have the greatest number of bizarre screen shots among all the members, posed the question “the most bizarre and outrageous screen shot’ and other cast members gave out various answers. Hong Soo Ah seemed a bit worried that the screen shots would appear again on TV, and they indeed were aired again.

The first shocking screen shot captured Hong Soo Ah with her back bending toe touching forehead position, which she had demonstrated claiming that it was one of her specialties.

The next bizarre screen shot taken at the zoo features Hong Soo Ah’s totally shocked facial expression due to a giraffe which tries to lick her with its tongue.

The third screen shot was taken while Hong Soo Ah and Noh Sa Yeon were doing the “eating rice puffs” faster contest and Hong Soo Ah started to shoot out all the rice puff particles while bursting into laughter. This scene engendered numerous photoshopped versions and parodies, making Hong Soo Ah the ‘Queen of Screen Shots.”

Meanwhile, to the question “Hong Soo Ah’s most embarrassing moment?” Seo In Young replied “screen capture” and started imitating, along with Shin Bong Sun, the way Hong Soo Ah cries. The most embarrassing moment that Hong Soo Ah herself pointed out was when her mom made a totally unexpected visit and she started crying uncontrollably. She stated “I understand how people often capture screen shots of me but they screen captured me crying when my mom came. I also wanted to cry in a pretty way but that didn’t work out well.”

Netizens who have seen the episode have commented, “Among all the bizarre and outrageous screen shots, Hong Soo Ah’s are the best,” “So hilarious,” “So many awesome photos released.”

Meanwhile, the final episode of SBS’s “Good Sunday—Heroes” will be aired on May 1st.