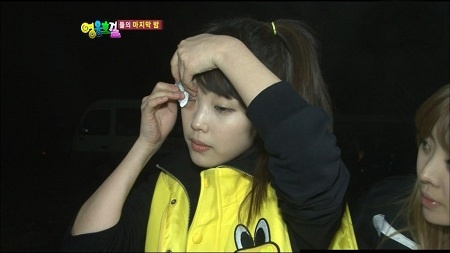 The “Heroes” cast members divided into two teams and played games. As they all got ready for bed, the losing team had to go out to wash their faces while the winning team got to wash inside. While washing, each of them revealed their no make-up faces to their fellow cast members, which they have spent the past ten months filming together.

After washing her face, Ji Yeon brightened up the atmosphere by doing her penguin dance again, which she had done in the very first episode. Also, IU impressed others by erasing make-up without even staring at the mirror. Do you think they look a lot different without make-up? They look more pure and fresh without make-up, but nothing too strikingly different to me.

IU
After School
Heroes
T-ara
Yuna Kim
How does this article make you feel?