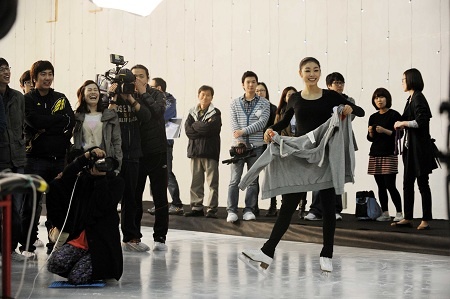 Photos of DBSK’s Yunho, f(x)’s Krystal, IU, and Others on Figure Skates!

Figure skating queen Kim Yuna began filming her new reality TV program “Kim Yuna’s Kiss and Cry.” The survival show stars the Queen herself and 10 other celebrities. Singers Yunho of DBSK, Krystal of f(x), Son Dambi, and IU; actors Suh Ji Suk, Lee Ah Hyun, Park Joon Geum, and Jin Ji Hee; comedian Kim Byung Man; and speed skater Lee Gyu Hyuk will compete against each other to star in Kim Yuna’s ice show in August. Shin Dong Yup will join as host of the show, while the Queen herself will serve as mentor and judge. The cast met on May 3rd to shoot their profile photos.

Each of the celebrities have been training in their own time for the survival program, and each displayed confidence and competitive fire during the photo shoot. “Kim Yuna’s Kiss and Cry” will pair up the celebrities with professional skaters to compete in ice dancing. Just like ABC’s “Skating with the Stars,” the show will host competitions and eliminate the pair that places last. The final pair will get a chance to perform on Kim Yuna’s ice show later in August.

“Kim Yuna’s Kiss and Cry” will air its first episode on May 22nd.