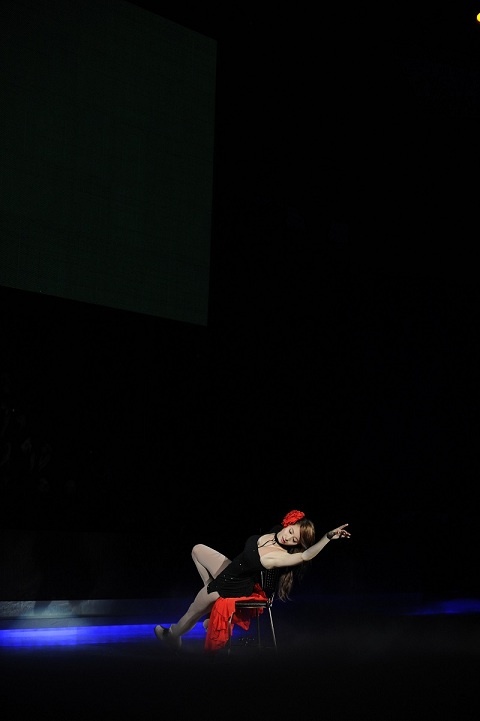 SBS has released another set of photos of the cast of upcoming reality show “Kim Yuna’s Kiss and Cry.” Unlike the last stills, these photos were of the casts’ first official on-ice performance. The show was recorded last Tuesday, May 10th. The ten celebrity contestants of the survival figure skating show include music artists Yunho of DBSK, Krystal of f(x), Son Dambi, and IU; actors Seo Ji Suk, Lee Ah Hyun, Park Joon Geum, and Jin Ji Hee; comedian Kim Byung Man; and speed skater Lee Gyu Hyuk. They all have been training for two months in their spare time and were able to show off their hard work to both the judges and fans present at the recording. Despite their relatively short time training, they wowed everyone on set; and the judges did not spare their praises.

The male stars were equally entertaining. Actor Seo Ji Suk and speed skater Lee Gyu Hyuk surprised the audience with their funny and unexpected costumes and funny choreographies. Comedian Kim Byung Man did not disappoint his fans with his Chinese outfit and amusing choreography.

Olympic champion Kim Yuna will join Shin Dong Yup as hosts for the reality show, and she will also serve as judge and mentor for the skaters. While the celebrity contestants performed individually for their first performance, they will be paired off with professional skaters to compete against each other in ice dancing. The show will host competitions and eliminate the pair that places last. The final pair will get a chance to perform in Kim Yuna’s ice show in August.

“Kim Yuna’s Kiss and Cry” will air its first episode on May 22nd.