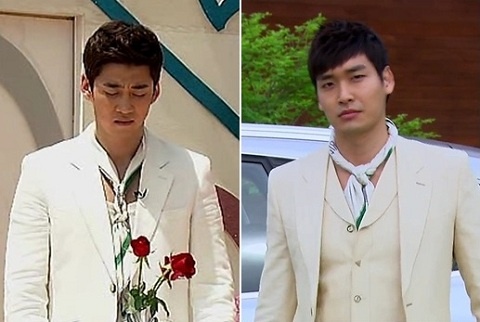 Actors Yoon Kye Sang and Jung Gyu Woon have been spotted wearing the same outfit in rivaling Wed-Thurs dramas aired in the same time slot. Both actors have been generating a lot of interest for sporting the same white suit and scarf from MVIO’s 2011 S/S collection.

Yoon Kye Sang displayed his stylish fashion sense in MBC’s “The Greatest Love” by featuring in a white blazer with a matching white and green scarf. He showed off his tender and romantic side by sporting this outfit in a scene where he candidly proposes to Gong Hyo Jin with three roses.

Jung Gyu Woon, who plays the role of Kang Gun Woo, the owner of the 1st district house, also featured an urbane and suave style in KBS’s “Romance Town.” The good-looking actor showed off his sophisticated fashion sense by styling a scarf instead of a tie to his all-white outfit.

Netizens have commented “I think both of them look hot,” “Styling a scarf make the suit look even better,” “celebrities are sure different,” “Yoon Pil Joo is a truly romantic guy.” So, who do you think did a better job of pulling off the outfit?