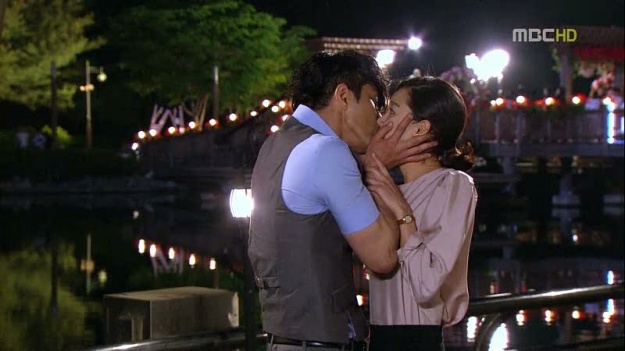 Cha Sung Won gave a surprise kiss to Gong Hyo Jin in order to find out his feelings for her. On yesterday’s episode of MBC’s “The Greatest Love,” Dok Go Jin (Cha Sung Won) believes that he is under the illusion that he has feelings for Gu Ae Jung (Gong Hyo Jin).

Toward the end of the episode, Dok Go Jin, who drops Gu Ae Jung off near the set, feels a bit aflutter but gets confused by his broken heart monitor.

Before heading off to the place where Yoon Pil Joo (Yoon Gye Sang) is waiting, Gu Ae Jung confesses to Dok Go Jin “To be honest, you made me feel aflutter. Cherry blossoms, camellias, and even azaleas bloomed in my heart after meeting you, but it’s fortunate that the flowers fell on their own.”

As Dok Go Jin listens to this speech, his heart starts pounding so he glances at his heart monitor but it still remains static at 88 heartbeats. Finding it strange and confusing, he states “This can’t be. My heart’s palpitating… I think something went wrong. I have to confirm it for myself,” and suddenly kisses her!

Yet, even after the kiss, his monitor still appears as 88 heartbeats. Gu Ae Jung who is hurt to find out that Dok Go Jun, whom she used to hate so much, doesn’t have feelings for her anymore and leaves him. Unable to believe the results, Dok Go Jin ends up taking off the monitor after she leaves and starts manually counting his pulse. And guess what, his pulse actually turns out to be… 130 heartbeats! Once Dok Go Jin realizes the whole situation, he runs after Gu Ae Jung to catch her. However, it’s too late as she was already holding hands with Yoon Pil Joo.

Meanwhile, MBC’s “The Greatest Love” continued to lead the Wed-Thurs drama ratings chart with an impressive 17.8% on Wednesday despite a slight dip of 0.1% from last Thursday, according to statistics by AGB Nielsen Media Research. Meanwhile, KBS’s “Romance Town” and SBS’s “City Hunter” which are aired during the same time slot received ratings of 10.7% and 12.3%, respectively.