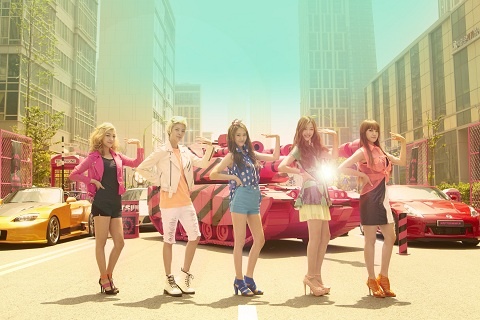 It looks like “Hot Summer” will be a huge hit as fans have been showing enthusiastic and heated responses to the 30-second teaser which was released on the 13th. The teaser itself has been creating so much abuzz already, generating nicknames for the new featured dances, such as the “I’m So Hot Dance,” “How’s My Shoes Dance,” and “Hand Fan Dance.” “Hot Summer” is pop dance song with a strong synthesizer sound and an impressive electronic beat to it. In the song, f(x) features ways to spend the hot summer in their own unique and fun style.

The repackaged album will contain a total of 14 tracks of various music styles. Along with ten tracks from their previous album “Pinocchio,” it includes four new songs: “Hot Summer,” “Can I Like You?” from the OST of SBS’s “Paradise Ranch,” f(x)’s debut single “LA chA TA” and “Chu~♡.”

Meanwhile, f(x) will kick off their promotions for “Hot Summer” this Friday, June 17th, on KBS’ Music Bank, followed by MBC’s “Music Core” on the 18th and SBS’s “Ingikayo” on the 19th.