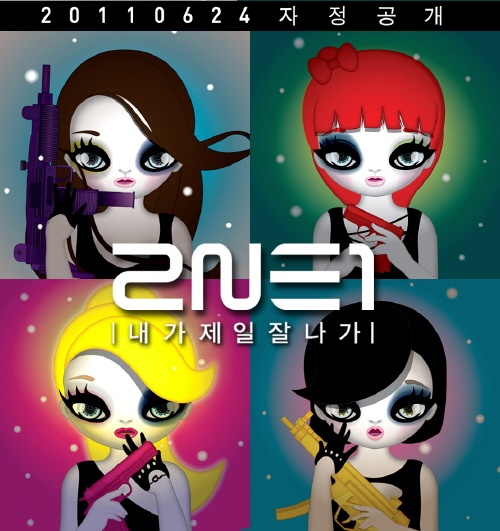 [Exclusive] 2NE1’s "I Am The Best" Written Preview

The excitement continues as we wait for the next 2NE1 release called “I Am The Best.” Here is the exclusive written studio preview of the song by Soompi after we visited YG Entertainment to listen to the track.

It can be said that it was expected as “Lonely” has a slower style and melody, but “I Am the Best” is the other sound that complements “Lonely.” This is the sound that made 2NE1 unique and Teddy seems to work so well in producing. The beat, electronic styled instrumentals make it a true club beat. It has powerful club beats and is carried at times by the vocal beats of the members as the electronic instrumentals fade in and out.

The song starts with a club beat and CL saying “Ne ga cheil jal na ga (I am the best),” followed by the “bum ba ra ta ta. . .” as heard in the teaser. This is brought to an abrupt end with CL saying “OMG,” leading into the song.

The song follows a verse pattern which has CL start with her “I am the best” line (sung in Korean), then Park Bom comes in with a vocal set, featuring her great, distinctive voice. Dara follows Bom’s verse with her freshness, as their voices work so well together. Just as in “Go Away,” Dara works right off Bom’s vocal sets, bringing more sweet energy. The song sounded more like the style of “Fire” than any other song although the rapping style also reminded me of “Can’t Nobody.”

After Dara’s vocal set, the beat stops but is carried on through CL’s feisty voice (this part reminded me of CL in the beginning of “Can’t Nobody”) as she uses a rapping style to lay down the vocals. Minzy comes in last with her own unique rap/singing style, similar to that of “Fire.” This vocal rotation of CL, Bom, Dara, CL, Minzy is repeated in the following verse.

Another similarity to “Fire” includes the repetitive wording. The wording/meaning is key to this repetitive style. The repeating lyrics (originally in Korean, this is translated) answer the question, “Who is cooler than me?” as it is replied “No, no, no, no, no. . . na, na, na, na, na. . .” (“na” translates into “me”). This most likely works into the title of the song “I am the Best.” The ending of the song is similar to that of the beginning as it ends with the “bum ba ra ta ta. . .” vocal beat and CL saying “OMG.”

At first the song caught me off guard as I had listened to “Lonely” so much I was expecting something on the same level. Listening to it over and over again though brings back the style and music that is 2NE1. The song portrays every one of their characters but actually it is 2NE1’s character as a whole. Their bad girl/ cool girl image is perfectly matched with the song and the title, “I am the Best.” Of their past hits it is definitely most like “Fire.” This musical style is what is unique to 2NE1; it gives us that feeling of “I want to be them or roll with them” because it makes you feel unstoppable.

I am excited to see the MV, as both “Can’t Nobody” and “Fire” were done so well with this type of music style (actually “Lonely” was great too ^^). This is the 2NE1 style we know and love—prepare to feel unstoppable because it’s “me, me, me, me, me!”

If you wish to use any of the content (excluding YouTube clips) for this preview of “I Am The Best” please receive written permission from Soompi by emailing sormark@soompi.com. This is considered to be exclusive content of YG Entertainment and Soompi Inc.

2NE1
CL
Dara
Exclusive
Minzy
How does this article make you feel?